Amelia Earhart as Japanese POW is Fake History Repeating Itself 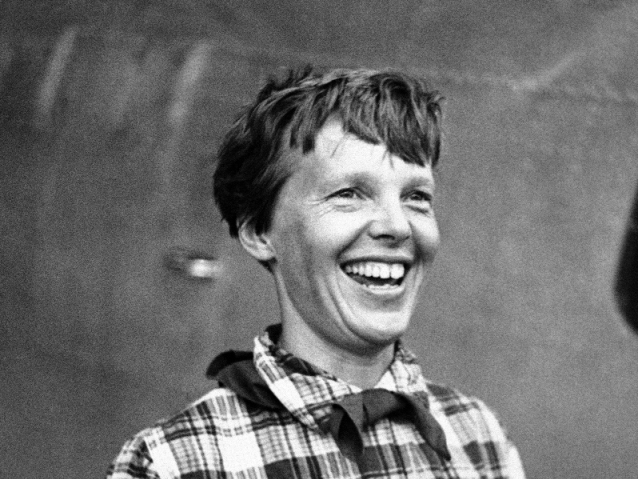 In July 1937, Amelia Earhart, American aviator lionized for her bravery, and navigator Frederick Noonan left New Guinea, then a territory of Australia, for the tiny United States-owned outpost of Howland Island.

The two were attempting to fly around the world and were in the middle of the most perilous leg of their journey: the island-hopping crossing of the vast Pacific Ocean. 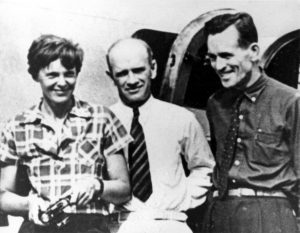 American aviator Amelia Earhart, left, and her navigator, Fred Noonan, right, pose beside their plane with gold miner F.C. Jacobs at Lae, New Guinea just before Earhart and Noonan took off in a flight to Howland Island on July 2, 1937. (AP)

En route to Howland Island, however, their plane disappeared. No clear evidence of their fate has ever been found. There are many theories, but no definitive proof, about what happened to the two between New Guinea and Howland.

Recently, though, someone found a photo that some alleged was taken somewhere in the Marshall Islands and showed Earhart and Noonan. This photo led to a special History Channel program and much media coverage by outlets such as CNN. The news reported that Earhart and Noonan had been captured and killed by the Japanese military. The photo was used as evidence to support that claim. 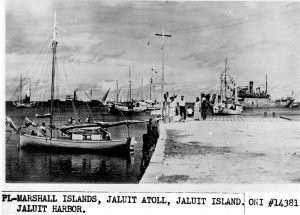 This undated photo was aired Sunday, July 9, 2017, on the History channel, argues that Earhart and her navigator, Fred Noonan had been captured and killed by the Japanese military.(Office of Naval Intelligence/U.S. National Archives via AP)

Giff Johnson, editor-in-chief of the Marshall Islands Journal, took to Facebook with this issue. There, commenters argued that surely the Japanese government would have records of this capture if it were true, and so must be made to release those records to the public.

The theory that the Japanese military had taken Earhart and Noonan prisoner had been discussed long ago, but rejected as untrue. So why have the same suspicions and false stories returned, despite having been thoroughly disproven? Was someone trying to destroy Japan-US cooperation in the Pacific?

The possibility is not at all far-fetched. Professor Yoichi Hirama, a retired professor at the National Defense Academy of Japan, wrote in a scholarly paper that the story of Noonan and Earhart having been taken prisoner by the Japanese has repeatedly been ginned up to coincide with tensions between Japan and the US over other issues.

This time around, my suspicions of sabotage were aroused because I had just discussed with a policymaker friend the possibility of Japan-US cooperation for the Pacific Islands, and in particular at the Eighth Pacific Islands Leaders Meeting (PALM) to be held in 2018 and hosted by the Japanese government.

Encouraged by this friend, I had in fact presented a lecture at a special Pacific Islands study committee—whose members hailed from the Japanese Diet—which stressed the need for Japan-US cooperation in the Pacific Islands. Given the clear push by the US and Japanese governments to enhance their cooperation efforts in the Pacific area, the timing of the photograph’s release to the media was too pat to be coincidental.

I visited Giff Johnson’s Facebook page and wrote, under the posting about the alleged appearance of Earhart and Noonan as prisoners of the Japanese, “This is fake news.” This in turn attracted intense denunciations by people who claimed they had actually seen Earhart in Saipan or elsewhere. I replied that this was not a rational discussion, and that this is exactly what had happened previously when attempts were made to stymie cooperation between Japan and the US in the Pacific.

A few days later, a Japanese blogger revealed that the photograph in question was from a photobook published in 1935, two years before Earhart and Noonan disappeared en route to Howland Island. The people in the photograph, whoever they were, could not possibly be the two missing aviators. The Guardian newspaper even wrote up the story.

The photobook containing the contested photograph is easily found in the online Japanese National Library Digital Collection through a Japanese-language search. Ten seconds or so are enough to find the image, clearly dated and labeled.

I told the skeptics on Johnson’s Facebook page about this photobook, but a few people in the Marshall Islands who wanted to become rich and famous by breaking this story slandered me. The Marshall Islands Journal itself even carried calumnies such as these.

Yellow Journalism, Then and Now

In general, I do not waste my time trying to disabuse people of their adherence to wild, easily-disproven conspiracy theories. However, I began to see that, at heart, this issue was not about the disappearance of Amelia Earhart and Fred Noonan, but about making false accusations against the Japanese military. In other words, the “Noonan and Earhart” photograph, although obviously a hoax, is part of a much larger pattern of yellow journalism, which has been used for decades to sow discord between Japan and the US.

Fake news, it turns out, is old hat. This all happened more than a century ago, in fact. Dr. Inazo Nitobe, who had been trying to improve relations between Japan and the US, had identified yellow journalism as a major hindrance to such efforts.

Dr. Nitobe was the first Japanese to study Japanese-US relations at Johns Hopkins University, and was also the Deputy Secretary-General of the League of Nations. Nitobe was married to Mary Elkinton, an American from Baltimore, and had the distinction of having been both a Quaker and a samurai.

From Nitobe’s time until today, there has persistently been a segment of the public which needs very little encouragement to believe the absolute worst about Japan. The same baseless stories keep circulating, but they are swallowed hook, line, and sinker, time after time.

One reason why Americans have tended to view the Japanese with suspicion may be because of Japanese people’s well-deserved reputation as very industrious immigrants. Around the turn of the 20th century, Japanese immigrants had spread to the north coast of Australia, the west coast of the US, Hawai’i, and other Pacific Islands. As a virtually endless series of monographs, articles, books, and anecdotal evidence all attest, the Japanese succeeded, sometimes failed, but were widely discriminated against in either event.

Recently, for example, I read Professor Manako Ogawa’s “Japanese pioneers in the fishing industry of Hawai’i, 1900-1920” and Masaaki Hori’s “Pirate emigrants to Hawai’i: The history of immigrants from Suō-Ōshima.” These works are about Japanese immigrants to Hawai’i from the Seto inland sea of Japan.

The immigrants from Seto and their ancestors had worked as fishermen for hundreds, even thousands, of years. As immigrants, after finishing their work on the sugarcane plantations, they went out to fish in the sea.

By 1910, the number of Japanese immigrants to Hawaii had increased to about 100,000, and some of them started deep-sea fishing, eventually establishing the first fishery companies in Hawaiian history. At that time, only the local Hawaiians fished, but they stayed less than a mile off the coast and their catch was only around 190 tons a year. The Japanese immigrants turned fishing from a very small-scale activity into a large industrial enterprise.

In addition to this personal initiative, and also partly as a result of it, the growth of the Hawaiian economy strengthened the position of the Japanese immigrants in Hawaiian society. This led to jealousy and suspicious feelings on the part of the Europeans who had colonized Hawai’i before the Japanese arrived.

After the first wave of Japanese immigration, more immigrants arrived from Japan, many of them military veterans of the Sino-Japanese War (1894-1895), Russo-Japanese War (1904-1905), and World War I (1914-1918). This influx of former military men increased latent fears among Europeans that many of the Japanese were actually spies. These fears were not allayed by the fact that many Japanese parents in Hawai’i wanted their children to have a Japanese education back in Japan. The practice of raising children partly in Hawai’i and then sending them back to Japan made Europeans suspect that Japan was somehow secretly preparing for war.

It was the combination of these different strands of ungrounded fears which drove the anti-Japan movements, which Dr. Nitobe also witnessed and analyzed. And it is the same anti-Japanism which today provides the subtext for the outlandish “Earhart and Noonan as Japanese POWs” theory, which has recently bested Earhart’s own record by flying swiftly around and around the world.

There have been many other similar stories, in fact, such as the one about a US citizen who died in Palau in 1923. A rumor spread that the Japanese military had poisoned him. The rumor had no basis in fact, but it fit in very nicely with the anti-Japan sentiment which blanketed the Pacific and the west coast of the US at that time.

These cloak-and-dagger tales notwithstanding, Lieutenant Colonel Earl Hancock Ellis of the US Marine Corps was a real spy sent by the US government to Japan and its mandate territory in the Pacific. His ideas were incorporated in “Plan Orange,” the US military strategy, first drawn up in 1924, to defeat Japan in a war. In 1992, the US Marine Corps reprinted this document, which included the following passage in the Foreword:

“These racist views [against the Japanese] had tragic consequences. They helped precipitate the diplomatic climate which contributed to the outbreak of war in the Pacific.”

Unlike many so-called “news” outlets today, the US Marine Corps understood long ago the real motivation of the kind of yellow journalism which has been with us for more than 100 years. Unfortunately, this yellow journalism is still with us, and has most recently found new life as a disturbing fairy tale involving Amelia Earhart, Fred Noonan, and a fictitious kidnapping in the middle of the Pacific Ocean.

Rieko Hayakawa holds a PhD from the University of Otago in New Zealand. Since 1991, Dr. Hayakawa has managed the Pacific Islands Fund of the Sasakawa Peace Foundation. Her duties included launching the Micronesia Maritime Security Project. She is currently researching the International Ocean Law at Doshisha University in Kyoto, Japan.