The tiny landlocked Himalayan kingdom of Bhutan in South Asia is the latest victim of China’s burgeoning revisionism. China’s aggression in Bhutan demonstrates the PRC’s preference for combining military intimidation and stealth economic infiltration in redrawing borders and rewriting history.

Chinese domestic politics, including pressure on the central government to craft a strong Chinese national identity, is among the main drivers behind China’s provocations. In constantly reworking its image, Beijing is necessarily engaged in an ongoing, wholesale revision of its foreign policy. And, to what purpose? Nothing less than its vision of becoming the center of Asia again.

The armies of India and China are locked in a standoff over the strategic Doklam plateau, an area inside the sovereign territory of Bhutan. Under the purview of the Indian-Bhutan Friendship Treaty, signed in New Delhi in February 2007, the tiny kingdom called in for Indian help after the People’s Liberation Army (PLA) moved in under orders from Beijing. 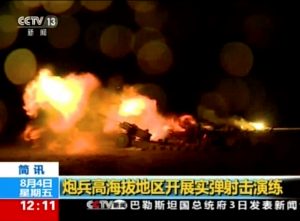 In this image taken from a recent video footage run by China’s CCTV on Friday, Aug 4, 2017 via AP Video, artillery guns fire during a live-fire drill by the Chinese army in China’s Tibet Autonomous Region that border India.  (CCTV via AP Video)

The aim of this treaty was to reaffirm mutual respect for Bhutanese and Indian independence, sovereignty, and territorial integrity. China’s unprovoked and unilateral attempt to change the status quo in Bhutan left India with no option but to rush to the aid of Bhutan. However, it turns out that the biggest threat to the independence, sovereignty, and territory of Bhutan came, not from India, but from the People’s Republic of China.

Ever since the Chinese offensive inside Bhutan began on June 16, 2017, an endless stream of analysis has focused on the present-day and near-term implications of Beijing’s move. What remains to be examined, however, is the larger picture, that of a rising China that is growing ever more revisionist, expansionist, and combative. 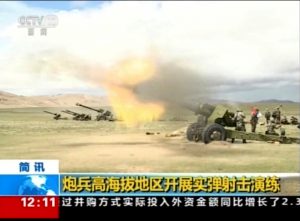 Doklam is hardly the first time China has tried to alter statuses quo in the context of territorial and boundary disputes. In April 2012, for example, during the standoff between China and the Philippines over the Scarborough Shoal, China weakly excused its aggression by claiming that Chinese vessels were operating in the “traditional fishing grounds for Chinese” around the islands. Following a short standoff, the Philippine frigate sent to patrol the area was withdrawn, leaving Chinese naval law enforcement ships in control of what Beijing calls “Huang Yan Island.”

Asserting dubious claims and then engaging in bullying and revisionism to get its way—this is now becoming an oft-repeated Chinese pattern we have all seen before.

Indeed, in the offensive launched in June 2017 in the Doklam plateau—which China now claims is a “traditional pasture for Tibetans” (ignoring completely the fact that China predicates the claim in Doklam upon its equally untenable claim over Tibet)—China attempted to build a road near the critical tri-junction border area among China, India, and Bhutan. This area is vital to India’s security.

According to a 2012 agreement with India, China promised to discuss with Bhutan any issues involving the tri-junction border area. Despite this agreement, China is now in the midst of a unilateral attempt to alter the status quo with Bhutan by encroaching upon Bhutanese territory. In fact, Chinese writings published after the incursion admitted that Doklam is Bhutan’s enclave.

A commentary published in the Global Times sees the standoff in reference to the colonial past of the region. “As two big developing countries, India and China both had a history of past colonization,” says the article. But what it fails to acknowledge is the selective approach that China takes to history, especially colonial history. Historical revisions, reinterpretations, and distortions have often been cited by China to justify redrawing of frontiers and expanding spheres of influence.

China selectively interprets colonial-era decisions in accordance with its own prerogatives. On the one hand, it accepts colonial-era accords and treaties when doing so suits Beijing’s agenda. On the other hand, China ignores those agreements, and openly even dishonors them, when bypassing the rule of law is more expedient to China’s goals.

For example, why does China reject the McMahon Line as a colonial era accord, but repeatedly cite the 1890 Anglo-Sikkim Convention in the case of the Doklam scenario? The only plausible explanation is that the former is inconvenient to Beijing’s geopolitical ambitions, while the latter fits quite nicely with them.

Manipulation of historical consciousness has long dominated the political discourse and foreign policy of the People’s Republic of China. The Communist Party has perennially employed selective versions of history to glorify the Party, re-establish its legitimacy, and consolidate national identity time and again.

One example of this is the PRC’s claim to have been the victor in China’s war with Japan. Unfortunately for those who assert this, the Fifteen-Year War in Asia ended in 1945, while the PRC did not come into existence until 1949. And yet, Beijing seems never to tire of repeating this obvious falsehood.

The national identity created through these innumerable historical fictions furthers the Chinese national interest. And it is this national interest, which, in turn, determines Chinese foreign policy and state action. The political and military standoff between India and China over Doklam is but the latest example of China—the world’s greatest revisionist superpower—redrawing borders and remaking a new status quo in order to justify acts of brazen aggression.

In the January 1965 issue of Foreign Affairs, Samuel B. Griffith II, referring to the civil war in Qing China as covered in 1798 by the Philadelphia Monthly Magazine, wrote, “Any lay estimate of current Communist Chinese military capabilities, or future potential, is likely at best to be but partially correct; at worst, flagrantly inaccurate.”

Written more than 50 years ago, this assessment of the Chinese military and its orientation holds ground even today. Xi Jinping is taking a page from Mao Zedong’s playbook in “keeping the enemy in the dark about where and when [Chinese] forces will attack.” Mao was fully in favor of launching a “just war” if it contributed to the end of ensuring pre-dominance of the Party and injecting national morale. What is Doklam if not, disturbingly enough, more of the same?

China has often touted its own “peaceful rise,” and yet Beijing’s endless status quo revisionism in almost all its existing territorial disputes—from the East China Sea to the South China Sea to the Himalayan borderlands—suggests that 21st century Asian political geography shall continue to be shaped, and reshaped, by Beijing’s selective historical amnesia and cartographic subjectivity.

In the specific case of Doklam, there is a fascinating twist to the tale. China did not foresee India’s tenacious military resistance and political fortitude in response to the PLA’s Doklam encroachment. Unlike the Scarborough Shoal, where Filipino forces quit without a fight, India appears very unlikely to withdraw its troops unilaterally from the Doklam border area, and is standing up to China.

Beijing should quickly set about finding a face-saving way to revert to the status quo ante, or else should prepare for a long contest with another rising power: India.