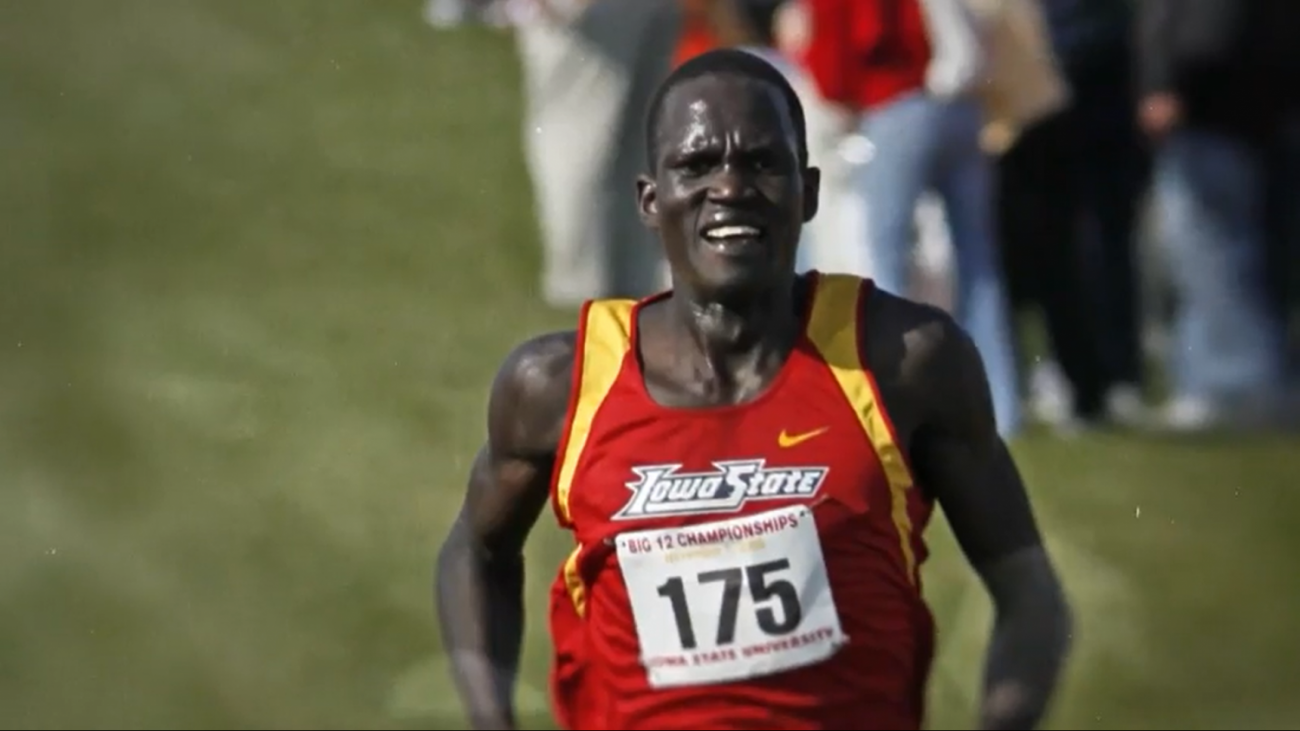 "If I cross the finishing line, it won’t be just me, it will be the people of South Sudan" (from the movie, 'Runner')

The Tokyo Olympics have been getting bad press recently, but a new film reminds us just how important this quadrennial sporting jamboree can be.

The Olympics, it is often asserted, is all about the money.

To a greater or lesser extent, that is true of all professional sports, but the Summer Olympics and the Football (Soccer) World Cup are in a class of their own, regularly attracting several billions of viewers, hence the vast income generated by the organizing bodies.

In other words, these events are enormously popular. Jaded Western elites may turn up their noses, but the global multitude laps it up.

Why should that be? Some answers are provided by the indie documentary Runner (2019, directed by Bill Gallagher).

In Japan it is known as Senka No Runner or Runner Through the Flames of War, which seems a better title.

The film traces the extraordinary life story of Guor Maker, a long-distance runner who participated in the London Olympics of 2012 and the Rio de Janeiro Olympics of 2016. In London, he wore the colors of the Olympic movement itself, having refused to run for the country of his birth, Sudan. In Rio, he ran for the world’s youngest country, South Sudan, which had recently won independence.

Guor was born in a war zone. The Sudanese civil war, between the Arab north and the black Christian south, went on for decades, claiming some two million lives and driving many more from their homes. Twenty-eight of Guor’s relatives were killed. With his father unable to support him, he found himself alone and scrabbling to survive at the age of nine. He was kidnapped by armed marauders, then enslaved by a powerful military officer. At some point, his front teeth were knocked out by the butt of a rifle. “I would rather die running than stay here,” he decided, and made a risky escape.

One of the fortunate ones, Guor made it to a refugee camp in Egypt, where he acquired official refugee status. From there — in an almost surreal transition — he moved to leafy New Hampshire in the United States. Sent to high school, he was amazed to discover that running was a sport, not a means of survival. A coach spotted his potential, and on his first ever marathon he qualified for the London Olympics.

Runner, a crowd-funded project, is far from a perfect film, but somehow its low-budget, hand-stitched nature suits the material. The simple animated sequence of Guor’s childhood traumas works particularly well.

Guor himself is not some Usain Bolt-type athletic superstar. At one point, he had to support himself by becoming an Uber driver. He placed 47th in the marathon at the London Olympics and 88th at Rio. In the case of the 2016 Games, he actually failed to qualify, having taken the wrong route at the Toronto marathon and then collapsing from exhaustion at the Gold Coast marathon in Australia. The International Olympic Committee (IOC), which appears in an unusually good light here, offered him a special invitation to Rio.

Just as there was no Hollywood ending for Guor’s running career, neither did independence end the suffering of the people of South Sudan. A bloody civil war broke out between leaders of the Dinka and Nuer tribes, with “human rights abuses off the Richter scale,” according to one aid agency. Guor found himself in conflict with a well-heeled political figure in the new government who demanded he hand over the scholarship money provided to him by the IOC. Some things never change.

What sticks in the mind from the film is the passion of the South Sudanese fans urging him on at the London Olympics.

As one puts it, “We told everybody in no uncertain terms that South Sudan was part of the Olympics, and that he was our runner.”

You would need a heart of stone not to be moved by the clip of the South Sudanese team, Guor included, dancing into Rio’s Olympic stadium in 2016, while young South Sudanese refugees in Kenya gaze delightedly at a TV screen.

The Meritocracy of the Olympics

A voluble minority of Japanese citizens and foreign pundits have been calling for the Tokyo Games to be canceled on medical grounds. That is despite Japan’s stellar record in controlling COVID-19 infections and fatalities.

Nobody can guarantee a 100% safe outcome, but professional sports events have been taking place around the world for many months. The economic cost of canceling could have been easily borne by an economy as sizable as Japan’s, but the reputational cost would have been significant, especially if China went on to mount a successful Winter Olympics six months later.

The implication would be clear. Japan, and by extension the democratic world, is nowhere near learning to live with COVID-19 and would be crippled by extreme risk aversion for years to come.

It is undeniable that the Olympic Games have become increasingly bloated. There is surely no need to include sports with their own high-profile tournaments, such as tennis, golf, baseball and sevens rugby. Marginal activities like surfing, climbing, skateboarding, BMX cycling, and many others could be scrapped with few viewers caring. There also seem to be far too many swimming events and therefore medals.

Yet, the core sports, especially athletics, have an attraction that has lasted millennia. They are also — like soccer, that other enormous global spectacle — the nearest thing to a meritocracy that we have in today’s world. It doesn’t matter where Usain Bolt went to school or who Allyson Felix’s father was, their accomplishments speak for themselves.

They can also speak for others, including those with no voice of their own.

Boisterous Australian sports fans were reduced to tears when Cathy Freeman, an athlete of indigenous Australian descent, won the 400 meters at the 2000 Sydney Olympics. Guor won no medals, but fulfilled a similar function for his homeland, as had always been his ambition.

“It’s not just me crossing the finishing line,” he says in the film. “It is the people of South Sudan, too.”

Both Freeman and Guor were following in the footsteps of Jesse Owens, the grandson of a slave whose four gold medals at the 1936 Berlin Olympics were a crushing rebuttal of Nazi ideology.

Ultimately, it is that hunger for recognition and respect that fuels the popularity of the Olympic Games, soccer’s World Cup, and similar international sporting fiestas. Despite their obvious flaws — in this troubled era of political and economic polarization, de-globalization, and ham-fisted social control — such events are needed more than ever.

Sport may be the only thing left that joins us together. That’s worth considering as the opening ceremony of the Tokyo Olympics approaches.


The official website for ‘Senka no Runner’ can be accessed here.