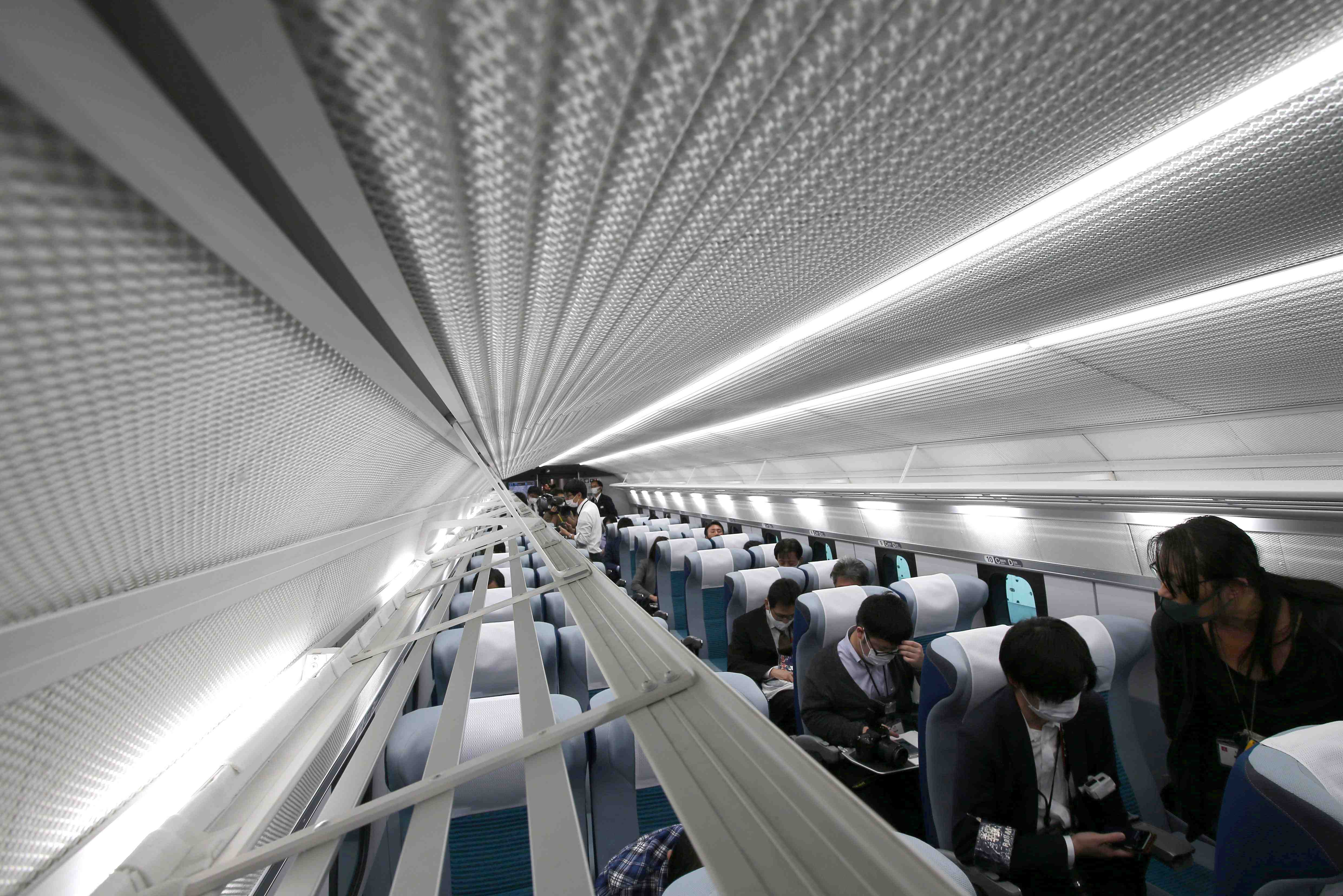 It’s kilometer 42.8 on the Linear Chuo Shinkansen’s Yamanashi test line between Uenohara and Fuefuki. At The Sankei Shimbun and JAPAN Forward, we had the opportunity to participate in the premium event for the media’s first test drive of the model L0 (read “El Zero”) system.

The event provided rides on both the new model and the conventional model on the same day, allowing us to experience and compare the new model’s advances and its 500 km/hour running speed. Here are some of its features. 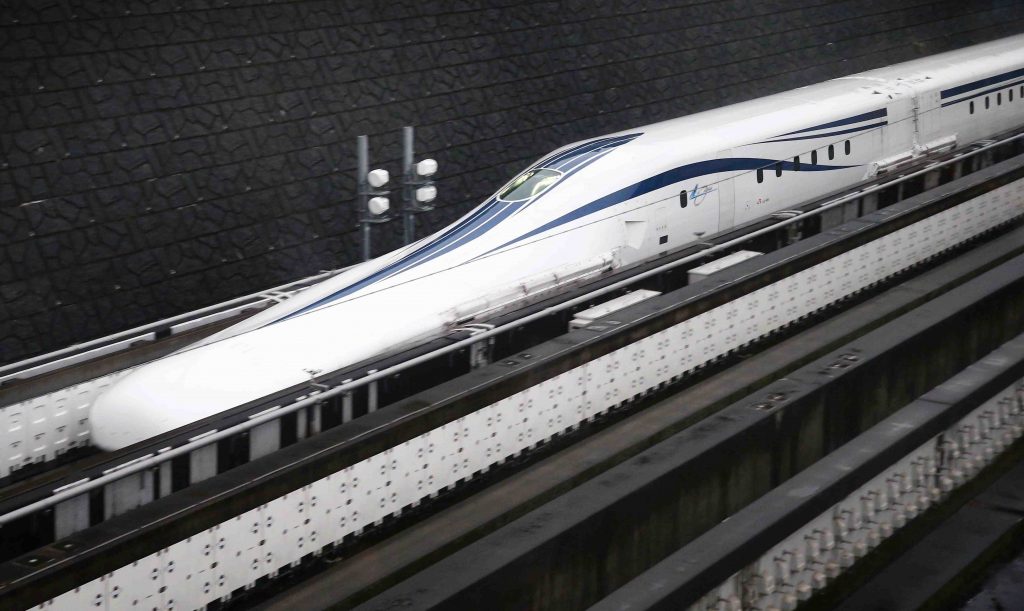 The new model had been running on the Yamanashi test line since August but this was the first time it had carried a large number of passengers on a test run. Unfortunately, it was raining when the event was held on October 19. Nevertheless, it was a valuable experience, appreciated even more so because the number of participating media outlets had been narrowed down as a countermeasure against COVID-19.

Inside the new model cars, one is immediately struck by how bright it is, it makes one gasp. This is due to the glittering sound-absorbing panels made of glass that are attached to the wall and ceiling.

The light is not just bright, but illuminated by LED (light emitting diode) lighting designed to reduce the glare so as not to interfere with reading or working on a computer.

How to improve the brightness of cars was a key issue in the Linear, as the trains will run mostly in tunnels in what is known as the “deep underground,” with only a short distance at ground level, so it is important to make the interior of the car bright.

As an added comfort for business travelers, the armrests of the seats are equipped with USB outlets and the table is foldable and light. There are also hooks for hanging jackets, luggage racks, and drink holders with a refined final touch that give the overallimpression of sophisticated, professional design. 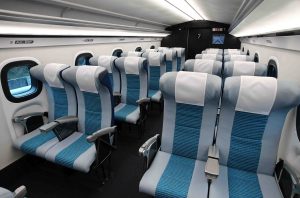 The next surprise was the seat. When you sit down the soft cushions provide firm support all the way from your head to your back. How comfortable it is!

According to the spokesman, “The width, depth of the seats and height of the backrest have been expanded to match those of the Green Car [first class] on the Tokaido Shinkansen.”

As a regular passenger of the normal Shinkansen, I felt I could be lulled into sleep just sitting on such comfortable seats.

Moving to the next new model, I found the interior finished in a different way. The ceiling and walls were covered with a film-like material like the one used for the Tokyo Dome roof, and the luggage rack was integrated into the interior space in a neat and futuristic design. Indirect LED lighting filtered through this layer of material, producing “a warmer atmosphere than the previous vehicle,” according to the spokesman. The membrane material was said to be effective in reducing the reflected noise inside the vehicle as well as suppressing other noise.

Next we moved to a conventional car, finding quite a different story. It doesn’t look different from train cars on the Tokaido Shinkansen. “Hmm, how ordinary. “I couldn’t help thinking. Compared to the innovative new model vehicle, it lacked the uplifting feeling of the Linear experience.

Sitting down, you immediately feel the difference between the old and new seats. Unlike the new model, the seat surface is clearly harder and more upright, without giving passengers the feeling of being “enveloped”. The actual size is only a few centimeters narrower than seats of the new cars, but they feel more cramped. 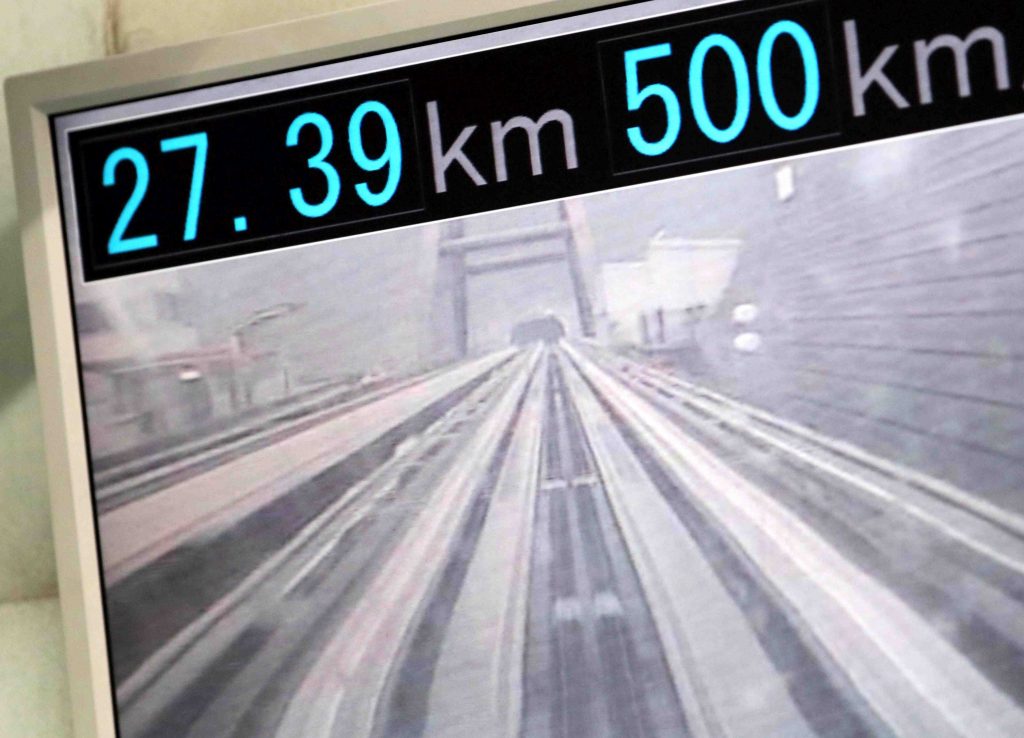 We rode both the new model vehicle and the conventional vehicle, making one round trip for each to measure their comfort levels. The main purpose was to compare their noise and vibration levels, which has been a major issue for commercial operations.

First, as an experiment, we pulled out the table, placed a bottle of water on it to check the shaking level in the moving train. In both the new model and the conventional model, the water vibrated, but the bottle did not fall. On the other hand, my paper documents spread on the table slipped off even in the new model.

Even so, probably because of the comfortable seat with cushions that wrapped you up to your ears, the new model gave the overall impression of being a smoother experience.

The next issue was the noise levels of the vehicles. We were told that at around 150 km/hour the train would switch from running on wheels to levitating with superconducting magnets. So I concentrated on detecting the differences in the sounds between the old and new systems.

The windows of the Linear train do not open, but when it is running on wheels , one can hear their noise. When the speed reached 150 km/h, I felt my body lifting and the sound of the wheels disappeared and changed to a “su-su” sound. This noise became louder as the train speed increased, and eventually turned into a “go-go” sound. 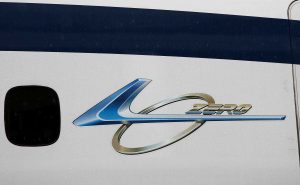 The new model vehicle with its round -shape front has reduced the air resistance by 13%. This is believed to be effective in reducing wind noise, and has been applied on other conventional trains to reduce noise pollution for the overall railway network.

As Hiroshi Oshima, director of the Yamanashi Maglev Test Line, said at the end of the test drive event, “Reducing noise and vibration are the key to improvement.”

Although the new vehicle promises all the good things one could wish for, it is still not clear which commercial vehicle design will be adopted.

Although test drives will continue until 2022, the schedule beyond that is uncertain. The Shinagawa-Nagoya route is likely to be delayed due to concerns about the environmental impact of tunnel construction in Shizuoka Prefecture. JR Central has planned the opening for 2027, but may have to postpone it. It could be a while before traveling on the Linear will become a reality.

(Read the story here in Japanese.)