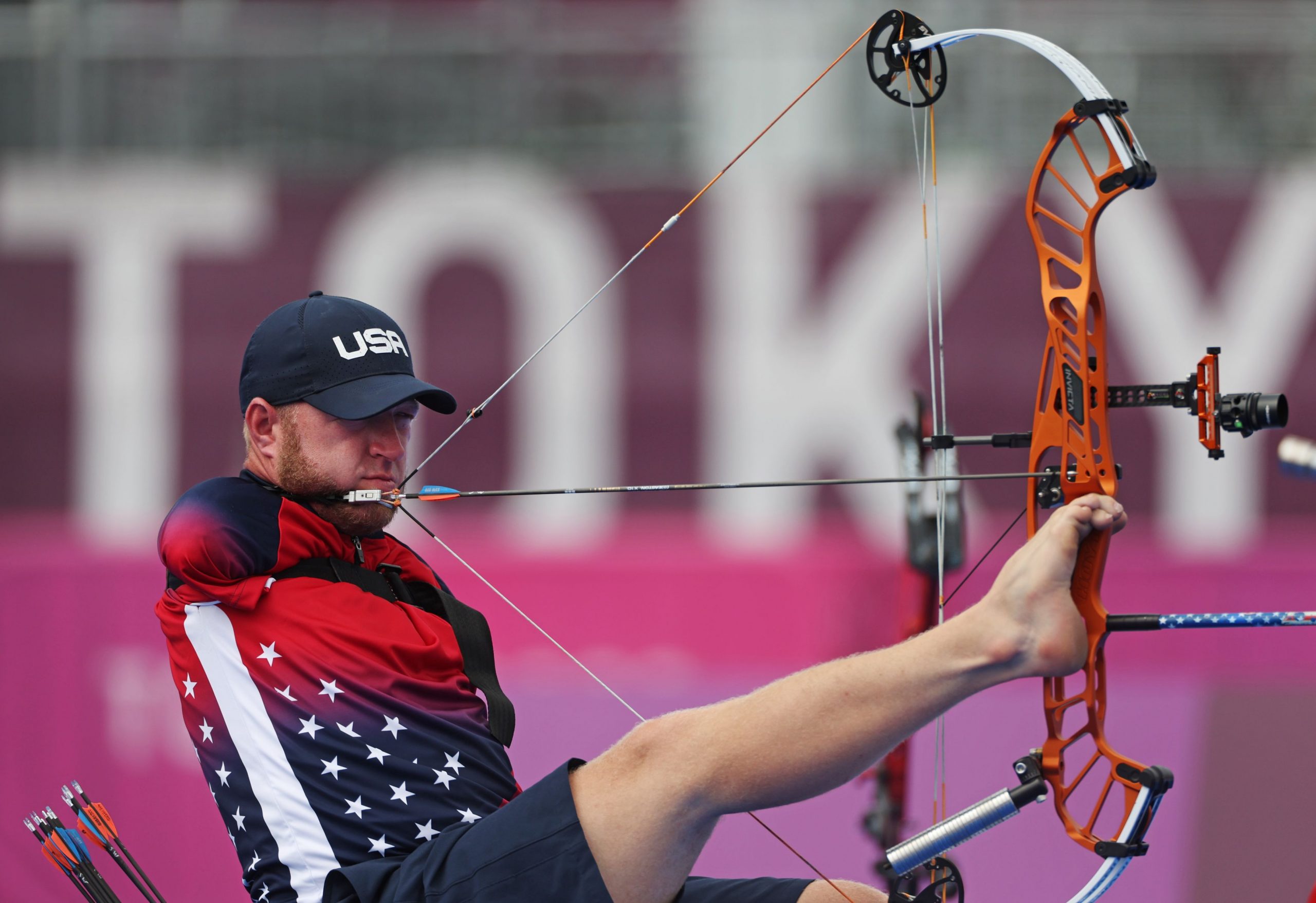 Matt Stutzman of the United States in action in the men's individual compound open 1/8 elimination round at Yumenoshima Park Archery Field on August 31. (Molly Darlington/REUTERS)

It’s hard not to be impressed by the abilities of archers taking part in the Paralympics.

Shooting at a 122-centimeter (4-foot) target from a distance of 70 meters (75 yards), archers require a steady hand and nerves of steel.

But take away the steady hand and it’s even more impressive. That’s the case with American Matt Stutzman, also known as the “Armless Archer.”

Born without arms, Stutzman uses his legs and feet to cradle the bow and releases the arrow with a subtle movement of his jaw.

“My right hip and knee take a lot of stress just because of how I have to force my body to hook my bow on it and push away,” the 38-year-old Stutzman told teamusa.org.

Stutzman became internationally recognized when he won the silver medal in the individual compound event at the 2012 London Paralympics.

He also won silver at the 2015 Para Pan American Games in August, then went on to win a team gold medal at the 2015 World Archery Para Championship later that month.

On December 9, 2015, Stutzman hit a target from 310 yards, breaking the longest Guinness-ratified distance by any athlete or individual in the world.

That notoriety led to Stutzman being featured in a Netflix documentary, Rising Phoenix, that was released in August 2020.

Stutzman’s life story is as intriguing as his ability to shoot arrows.

Adopted at four months, Stutzman grew up in Iowa in a family with eight brothers and sisters.

He spent a lot of time outdoors on hunting and fishing excursions with his father which allowed him to develop strong foot-eye coordination.

With those skills developed he eventually took up archery. He purchased his first bow when he was 16 but it was stolen a year later and it wasn’t until he was 26 that he purchased another one.

From that day on he practiced incessantly, setting the bow on his right shoulder with its mechanical release aid. He drew it back with the trigger just under his jaw bone and released it by moving his jaw slightly backwards.

In addition to being a silver medal-winning Paralympian, Stutzman is also a motivational speaker and a single dad to three boys.

“I’ve noticed the boys don’t see me as someone with a disability, they just see me as a normal, average person which is pretty amazing,” Stutzman said.

Archery isn’t the only competition Stutzman takes part in. He also is an avid drag racer and has taken part in the Redneck Rally Race in Iowa.

Stutzman was in action on Tuesday, August 31 but was eliminated by Marcel Pavlik of Slovakia by a score of 143-137 in the open 1/8 elimination round in the men’s individual compound event at Yumenoshima Park Archery Field.

Despite finishing ninth overall, Stutzman was upbeat about his performance.

‘I feel amazing, feel that we’re all out here competing, feel like you guys can do anything,” Stutzman told NHK. “If I can go shoot my bow and have a good time doing it then you guys should be able to do anything you want as well.”

Pavlik went on to the bronze medal match where he lost by a score of 144-142 to China’s Xinliang Ai.

Archery made its Olympic debut at Paris 1900 and was also featured in 1908 and 1920. After a 52-year absence, it made a return at Munich in 1972 and has remained on the Olympic program ever since.

Archery has been included in every Paralympic program since the inaugural competition in 1960.

Along with the United States, Great Britain and China are considered to be among the leading countries. Iran and South Korea also have medal contenders.

Along with Stutzman, one of the most famous archers is Zahra Nemati of Iran.

Originally a black belt in taekwondo, Nemati took up archery after suffering a spinal injury in a traffic accident. One of the most popular and successful female Paralympians to come from Iran, she won gold at both London 2012 and Rio 2106.

She also competes against able-bodied athletes, one of the few to take part in both the Olympic and Paralympic Games.

Nemati will compete in the women’s individual recurve event on Thursday, September 2.