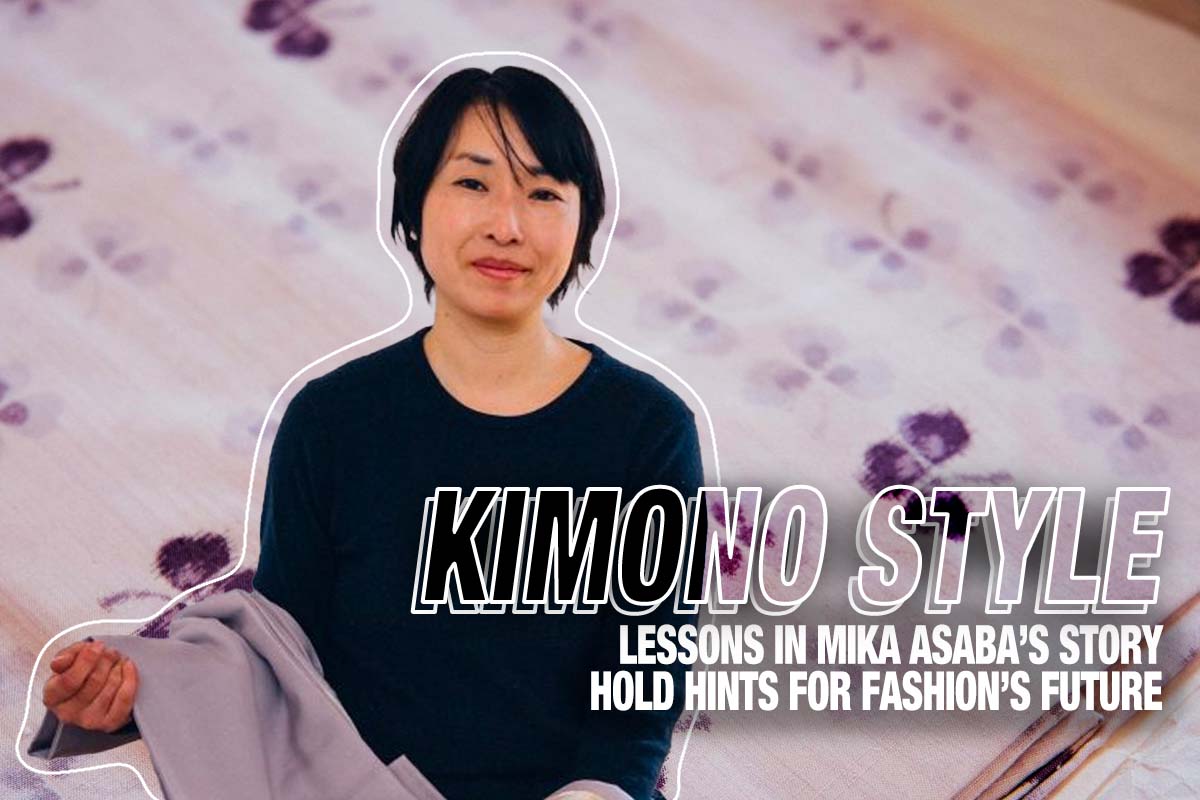 What is a typical Japanese woman’s experience with kimono? One of the reasons for my research was to establish what a common experience might be. For this reason, although I interviewed a lot of women who really like kimono, I also made an effort to include people who were not especially interested in kimono, and did not see it as a preoccupation in their lives.

I am introducing Mika, as I think Mika has an experience of kimono that is very typical for younger adult women. Whereas people of the generation above Mika’s would have remembered parents, aunts and grandparents in kimono, she has only a few memories of people around her in kimono.

She remembers the ceremonial rites of passage that Japanese go through ー seven, five, three (years old), and coming-of-age (twenty years old) ー were celebrated with kimono. But the kimono for these were rented. The kimono rental business has grown enormously in the last 30 years, and rentals have become popular for all kinds of ceremonial wear.

One catalyst for thinking about Japaneseness was her time spent living in another country, and this is also typical among her generation. As an adult, Mika has become more interested in kimono, and hers is the age group that I think is becoming particularly more aware of kimono as a casual or fashionable clothing option.

Mika was in the 35-44 year age group for my research at the time of my interview. She was living in a suburb of Tokyo and was a busy housewife with three young and energetic children.

Mika lived in the UK for a while when she was growing up, and then did so again for two years when she was a student. She had the typical memories of kimono that most Japanese girls have. She remembered going to a photo studio for seven, five, three (year old) ceremonies, and then having another photograph taken for her coming-of-age ceremony, when she was 20 years old. She also recalls that she wore a kimono for her university graduation when she was 22 years old. On these occasions, as is common these days, the kimono were rented at the photo studio.

Her mother, as she recalls, only wore kimono on very special occasions, and Mika thinks that her mother gave away that kimono to her older brother’s wife.

When Mika was 22, she started to practice aikido. Now she is taking a child-rearing break, but she says she would like to do it again in the future. One of her aikido friends also happened to be a kimono dressing teacher, and she gave Mika a raw silk kimono so she could practice kimono dressing. Mika had some free lessons, but she doesn’t feel confident enough to wear kimono out in public yet.

Mika says that it was going to England that really first made her aware of being Japanese, and the experience inspired her development of some interest in Japanese culture. Then when she was practicing aikido, she liked the way that wearing a hakama made her feel.

She also went to a wedding and borrowed a light purple kimono from one of her relatives. She really loved the way she looked in that kimono and was moved by it, so she searched for a light purple kimono. She found the kimono fabric on the internet and also a place to have it made up into her own kimono.

Mika doesn’t feel confident enough to dress for a wedding, even if she could wear a casual kimono. Her insecurity extends to worrying about whether she has the right accessories to go with it. So far, she has not had an occasion to wear her purple kimono, but she is looking forward to doing so ー when she gains confidence.

Like many young women, Mika inherited some kimono from family members, in this case, her aunt. However, she thinks that the kimono are probably a bit too short for her to wear. She also has the common problem of many mothers of young children in that she is afraid her kimono would get dirty if she wore them with her children around.

Lessons from Curiosity in Traditions and Treasures

Mika probably has a very common kimono history for someone in her age group. Despite the concerns holding her back, she is in the age group that is becoming interested in kimono as fashion and casual wear. However, actually wearing a kimono is difficult with small children around.

What lessons can be deduced about the future of the kimono industry if this is a typical case?  It would seem from the evidence in this history that for formal wear, the majority of users may prefer to rent rather than buy. However, there are still families who want to order and purchase their own kimono for these special occasions.

Kimono wearers may be single, childless or have older children. While this age group may not have a deep history with kimono, interest is growing. Enabling mothers with small children to be able to wear kimono is difficult, but perhaps one key could be washable or easy to wear fabrics, such as cotton or polyester.

If people in this age group become more interested in kimono as fashion, then perhaps they will also become interested in making a legacy of kimono that they can pass on to their daughters. Then they might start purchasing instead of renting kimono for special occasions, too. This kind of story gives the kimono industry much food for thought about the future.

RELATED: Kimono in the Closet series: