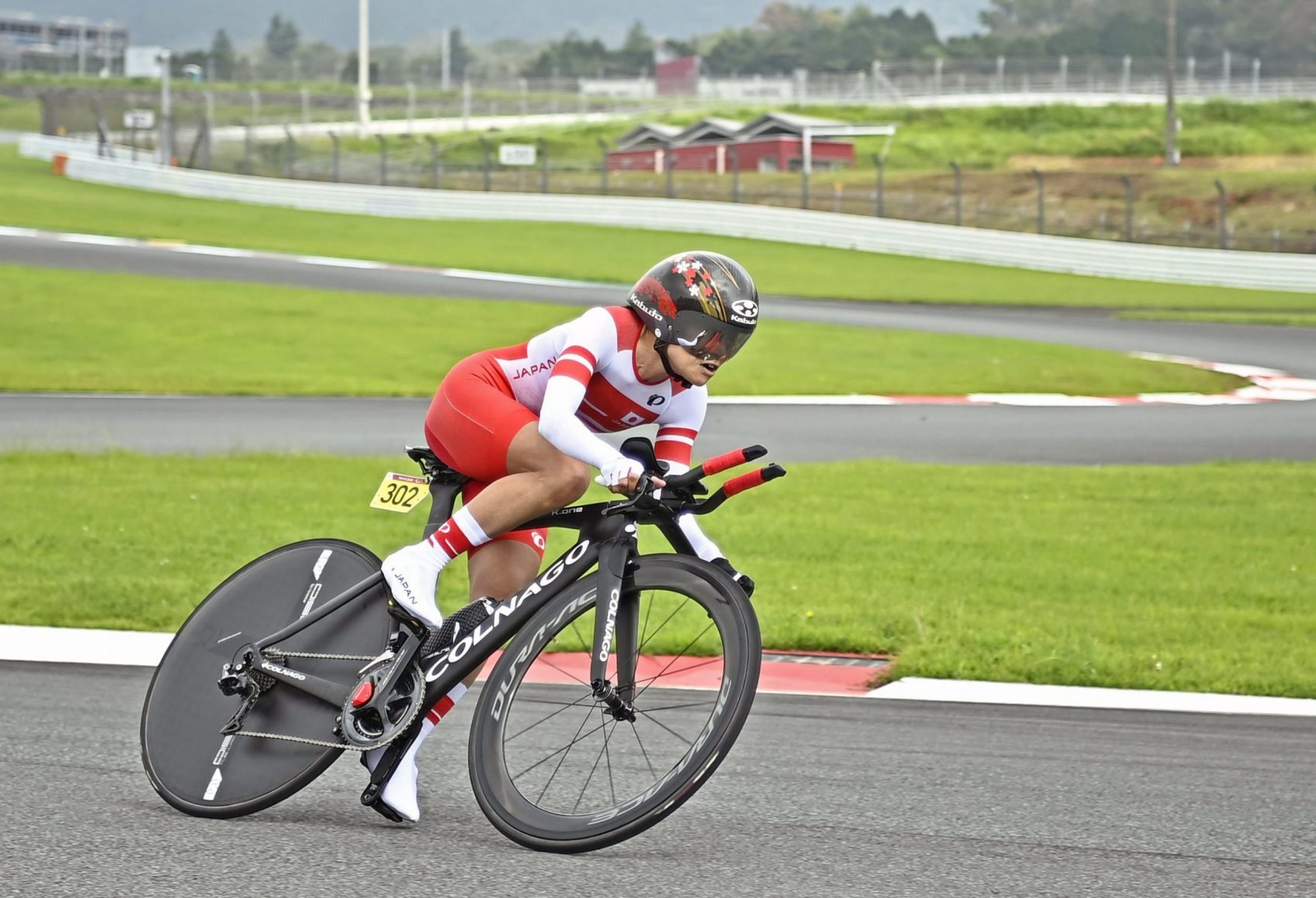 The 50-year-old Sugiura triumphed in the women’s road time trial race in the C1-3 category (for athletes with upper and/or lower limb disabilities), completing the two 8-km laps in 25 minutes, 55.76 seconds at the Tokyo Paralympics.

Japan’s previous oldest Paralympic gold medalist was judoka Takio Ushikubo, who was 46 years old when he captured the 71-kg division title at the 1996 Atlanta Paralympics.

At the race’s midway point of the 15-woman race, Sugiura, a native of Kakegawa, Shizuoka Prefecture, held a 20-second lead.

Sweden’s Anna Beck grabbed the silver medal in 26:18.03, while Australia’s Paige Greco, who won the first gold medal of the Tokyo Paralympics in the C1-C3 3,000-meter individual pursuit final on August 25, claimed the bronze in 26:37.54.

Sugiura is scheduled to compete in the women’s C1-3 cycling road race on Friday, September 3, also at Fuji International Speedway.

“I could put the plan I had before the race into practice. I wasn’t nervous and managed to race while keeping myself focused,” Sugiura told reporters after the race, according to Kyodo News. “My pace dipped [in the latter half of the race] and I thought I might not make it [to the line first].”

Sugiura’s involvement in para cycling began in 2016 after falling off her bicycle in a triathlon that year. The accident caused paralysis on her right side.

Two years ago, Sugiura was the runner-up in the women’s C3 road race at the Para Cycling Road World Championships in Emmen, the Netherlands, and second in the C3 time trial there.

She pondered retirement in the run-up to her 50th birthday last December, but was convinced to hold off on those plans.

“In 2021, I’ll be at age 50, so I thought that it would be impossible for me to continue competitive action, despite improving my performance level. I have designed my life every 10 years, so I felt like I had to move onto the next chapter of my life,” Sugiura said in a December 2020 interview, according to olympics.com.

“Therefore, I declared my retirement intention in the training camp. However, my personal coach Mitsuya Yahata said, ‘There would be a big difference between your 20s and 50s, but regarding the age of 49 and 50, that is a margin of error.’ The expression, ‘margin of error’ made me laugh off.”

After receiving the gold medal on Tuesday, Sugiura admitted she was glad she held off on retiring until after the Paralympics.

“I’m really pleased that I didn’t quit,” she was quoted as saying by Kyodo News. “People around me supported me to continue this sport. Maybe I’ll give motivational talks everywhere on how to win a gold medal at my age.”

Shinya Wada placed second in the men’s T11 1,500-meter race at the New National Stadium, earning his second medal of the Tokyo Games.

In the shorter race, Wada signaled that he would be a medal contender, too, by placing second in his qualifying heat on Monday, August 30. For Wada, it was a short-lived season-best time of 4 minutes, 7.96 seconds.

A day later, he was even faster.

Karasawa collected the silver in the 1,500.

Wada, who effectively teamed up with guide Takumi Hasebe, noted that his race positioning played a pivotal role in his runner-up finish.

“It was good that I positioned myself at the front in the middle part of the race because if I stayed in the back, I would have had problems,” Wada was quoted as saying by Kyodo News.

Rasouli had three attempts in the event. He jumped 4.37 meters on his first try, 4.21 on his second and then attained his PB.

Originally scheduled to compete as a 100-meter sprinter, Rasouli entered the jumping event instead due to circumstances beyond his control.

Rasouli arrived in Japan last weekend along with fellow Afghan Paralympian Zakia Khudadadi, who competes in taekwondo. With the support of the International Paralympic Committee, the two left their homeland for France earlier in the month, escaping the violence and uncertainty of life since the Taliban takeover.

China jumped out to a 4-0 lead by halftime and held on for a 7-4 victory over Japan in the men’s goalball quarterfinals at Makuhari Messe in Chiba.

Japan fell to 3-2 in the goalball tournament, which involves visually impaired athletes relying on ear-hand coordination. There are bells inside the ball to help players locate it.

Mayumi Narita figures it’s time for the next generation of swimmers to take center stage.

Twenty-five years after making her debut at the 1996 Atlanta Games, the 51-year-old Narita competed in her sixth and final Paralympics on Monday, August 30.

“I feel blessed that I really swam until the end,” Narita told Kyodo News. “I don’t really give much thought about my age because I’ve just really loved swimming.”

Narita touched the wall in 47.86 seconds in the backstroke final which was won by China’s Lu Dong in a world-record time of 37.18.

Narita competed in the 2008 Beijing Games but didn’t win a medal and decided to step back from competition for a while.

But after helping Tokyo win the hosting rights for the 2020 Games, Narita decided to return to the pool in 2015, a year after she took up a position as a board member on the Tokyo 2020 Organizing Committee.

She said she wanted to do more to give back to the world of para sports while building excitement for the Tokyo Games.

“My journey may have been long but it went by like a flash,” Narita said, adding it’s time for a new generation of swimmers to step into the spotlight.