Asakusa’s Tori no Ichi: Wishing-in the New Year in the Time of COVID-19 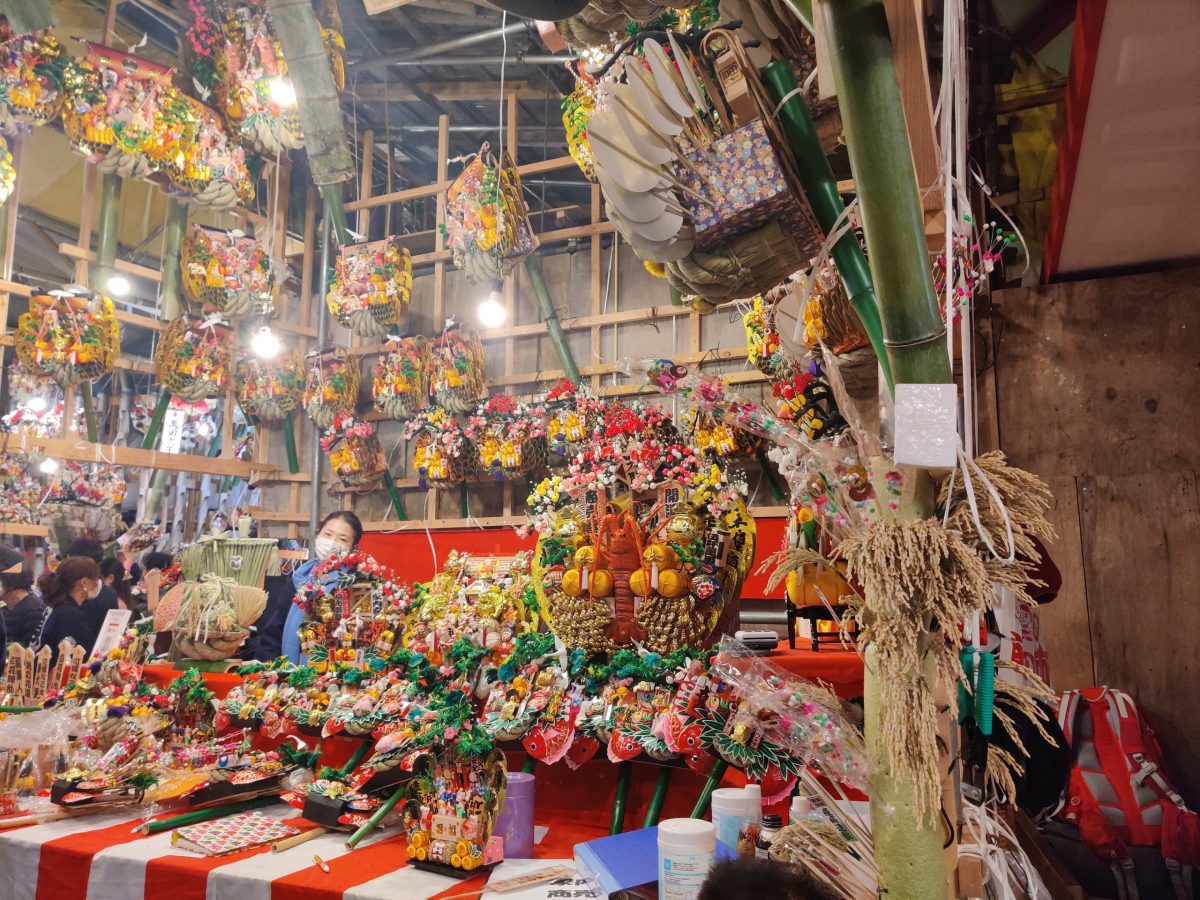 The warm glow of lanterns. The chatter of people in the distance. The occasional burst of laughter as people wished to each other, “Happy New Year”. The luscious decorations on bamboo rake-shaped good luck charms.

And yet, somehow, while keeping social distance and wearing masks, people in Asakusa gathered to visit the traditional stalls and usher in the New Year.

Tori no Ichi’s festivities were born in the Edo period (1663-1868), on the outskirts of Edo (now Tokyo), in what is now known as Adachi Ward.

The festival originates from traditions of the Day of the Rooster (tori), which happens three times, once every twelve days in November.

Eventually the festival spread to Tokyo’s Asakusa neighborhood, where it has endured the test of time. People would come to Chokoku-ji temple to wish for good fortune, and good wealth, in the New Year.

Raking in the New Year

Today, much of the symbolism from the Edo period has been preserved. The star of the show is a rake made out of bamboo, which features various charms and symbolic decorations. Called in Japanese kumade, which literally means “bear’s paw”, people traditionally buy this piece of craftsmanship to beckon in good luck for the New Year.

What kind of decorations, you might ask? Well, as varied as human imagination will allow!

I visited Tori No Ichi at the end of November 2020, the last day of the festival, and it was an incredible sensorial experience.

Stall after stall selling different variants of beautifully decorated bamboo rakes, each with their own particular style which spanned from kitsch, to classy, cute to sophisticated and everything in between. Designs ranged from small arks, to small houses, and overflowing with auspicious motifs such as gold leaf, carps, cats, foxes, and much more.

People coming to buy might be businessmen or families, some of whom have a family tradition of always buying at the same stall. Even VIPs would commission a bamboo rake, which would then be displayed with pride at the forefront of the stall. And to match the variety in clientele, the price of these objects varies just as wildly. One stall had prices which went from a manageable 4,000 JPY ($38 USD), up to about 100,000 JPY ($965 USD).

What made the festival’s atmosphere so warm and welcoming was, of course, the ritual everyone follows when buying the kumade.

All the staff of the stall, wearing the traditional clothing such as Happy Koto, gather around the customer, and after exchanging wishes for a good year ahead, everyone claps rhythmically in what is known as Tejime.

This ritual is often performed at festivals with a celebratory nuance, it adds to the atmosphere of Tori No Ichi, and makes the act of buying a kumade even more special.

Creativity at its Best

One stall which was particularly stunning was close to the main entrance, one stall called Shiroishi. The star bamboo rake, which covered half of the stall’s display, featured decorations in the shape of people and things that had dominated the news in the past year.

Small uncanny figurines of the current Prime Minister of Japan, Yoshihide Suga harmoniously sat next to U.S. President Donald Trump, and the mascot of Japan’s fight against COVID-19, the mythological creature Amabie.

I learned that the tradition of doing a “kumade of the year” was born from a bookshop that had commissioned it. But the stall owner thought it was such a good idea, that it became the distinguishing feature of Shiroishi.

A young woman in her forties took the time to explain to us the significance of the various decorations used in the bamboo rakes as well.

“It’s customary to include tropes that are a play on words and wish for good luck.” To explain her point, she reached out for one particular decoration, which featured pleasantly chiming small bells. She explained that the word “to chime” (narimasu) in Japanese is the same word you would use to wish someone a new year (ii toshi ni narimasu youni!), thereby symbolizing New Year’s luck!

And quite apart from symbolism, the variety in the stall design was astounding.

To reflect the times, there was even one stand that had a bamboo rake decorated in what looked suspiciously like a Kimetsu no Yaiba themed character, the anime which is incredibly popular in Japan. When the shop assistant saw me looking, though, he smiled and said “oh, what a coincidence!”, and he laughed cheerily.

In some ways, it summarized the whole spirit of the festival: when creativity is prioritized, all bets are off, and anything is allowed.

Tori No Ichi and COVID-19

Although the festival has endured the test of time, this year was bound to be a little different than usual.

To start with, everyone going in and out of the main gates had to fill in a form with their personal details to be contacted in case infections were confirmed. Visitors were encouraged to download the contact tracing app COCOA, and thermography cameras were installed at the entrance of the temple. Masks were required to enter the festival.

As far as the number of people there, the crowds were by no means overwhelming, it was a rather moderate affair.

Talking to several shopkeepers, it appeared that the influx this year was significantly reduced compared to a normal year.

“I think the number of people is roughly half that of last year”, said the Buddhist priest at Chokoku-ji in charge of calligraphy stamps on the evening of November 27.

In the streets adjacent to the temple, there were also food stalls selling delicacies to passers-by. A woman selling roast chicken skewers (yakitori) also confirmed that compared to last year, the influx was much less than usual.

However, she also seemed cautiously hopeful.

“This is the first festival we are attending since Hanami season (cherry blossom viewing). It’s been nice seeing customers again.”

In the crisp evening in a modest way, even this woman working at a  small yakitori stall was trying to stay afloat amidst COVID-19.