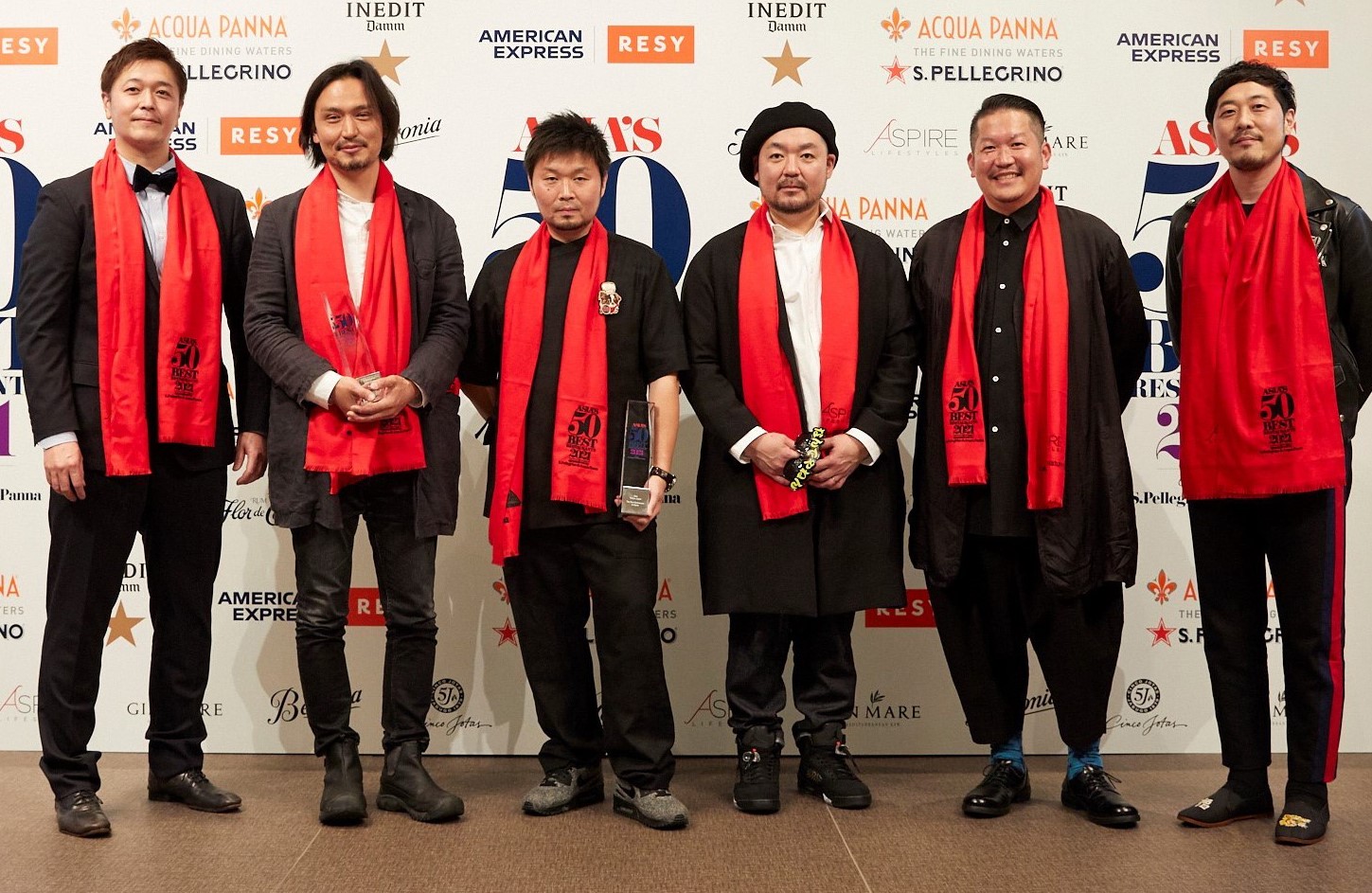 This year, the ninth edition of Asia’s 50 Best Restaurants list was unveiled on March 25, 2021.

The region’s largest restaurant competition is held once a year, with San Pellegrino and Acqua Panna serving as international sponsors. In the past, the glamorous event has been held in major cities such as Singapore, Bangkok, and Macau, bringing together star chefs from all over Asia, as well as famous foodies and media from around the globe to witness the historic moment.

But the event was held in very difficult circumstances these past two years.

This year, the award ceremony was held at the Kahala Hotel & Resort Yokohama, which was newly built in September 2020 in the Minato Mirai district of Yokohama. Although the state of emergency had been lifted, 2021 ceremony attendees knew that the situation was far from festive, with their first utterance being words of disbelief that the pandemic had lasted so long.

And yet, everyone seemed quietly moved by the fact that the award ceremony could be held at all.

“It took a long time for us to even decide whether to have the ceremony in the first place,” explains Takanori Nakamura, the long-time chairman of rankings, The World’s 50 Best Restaurants. He then recounted what it took to reach this point, saying : “We were finally notified by the head office that the results should be revealed in a proper ceremony at the end of 2020.

“It’s been almost a year since people around the world found themselves in this extraordinary situation of restricted travel and dining,” Nakamura continued. “The world has changed and we have been forced to live in completely new ways. It is heartbreaking to think about the people who have passed away and their families, but the restaurant industry is also going through unbearable hardships. The only positive side to the pandemic is that we know that it will be over in the near future. When we enter a post-Covid-19 world and it’s time to travel and dine out again, consumers will be in need of a stellar list of restaurants. We are delighted to have decided to hold this ceremony to support the Asian restaurant industry and rekindle our excitement for food.”

Normally, the awards ceremony for Asia’s 50 Best Restaurants is filled with glitzy performances and glamorously dressed foodies and journalists from various countries. Unfortunately, as with the Olympics, attendees from overseas were not able to participate this year. Instead, a large monitor was set up at the venue, and the rankings were announced from the United Kingdom in a simultaneous worldwide broadcast.

Here is the list of 9 Japanese restaurants that made it to the top 50, shown in their order of ranking:

It’s not much different from last year’s list, but the lack of change is proof of a fight well fought by Japan. International travel bans from the spring of 2020 have meant the voters who influence the results could not travel to Japan. Naturally, Japan as an island nation was at a greater disadvantage compared to other countries.

Of special note is L’Effervescence, which rose to 19th place from 48th place last year. Chef Shinobu Namae analyzed the results this way in an interview: “Last year, I was sure we wouldn’t make it to the list this year. But a state of emergency was declared in Tokyo immediately after, and the restaurant industry went into a tailspin. The owner of our company encouraged us, saying, ‘Don’t worry, we’ll be fine. Let’s find what we can do together without giving up on the restaurant industry.’”

“Our restaurant had opened just before the Tohoku earthquake,” he added, “so we experienced a time when no customers came at all. That experience prepared us for getting through the pandemic. We made sure to maintain communication and encourage each other not only in the kitchen but also with those working outside the restaurant, like our producers and regional chefs. When I think about how our efforts were recognized, I feel touched to have received such a ‘warm’ award.”

The words “warm award” used by chef Namae symbolize the guiding principle of The World’s 50 Best Restaurants. Its unchanging principle is not to pick the most luxurious restaurants, but the greatest restaurants.

Den, the top-ranked restaurant in Japan for the fourth consecutive year, has been praised by foodies as having “an irresistible charm that makes customers come back for more,” and has even received an award for hospitality.

Den’s head chef Zaiyu Hasegawa commented cheerfully, “The first restaurant I want to visit is The Chairman in Hong Kong, the top restaurant this year. I love (chef) Danny, and I was hoping that a restaurant like The Chairman would win first place, and they really won.”

Compared to other restaurant competitions, The World’s 50 Best Restaurants is unique in that the chefs’ ability to convey their message weighs heavily in the ranking process. The pandemic may have unexpectedly brought more attention to chefs who especially excel in conveying their message to society.


What is the Next Milestone for Restaurants in Japan?

This year’s award ceremony has many things worth noting. One of them is that 11 new restaurants made it to the top 50. It’s a shame that none of them were from Japan, but Ryogo Tahara, the head of logy (Taipei) in 24th place for the first time, once worked at Florilege as a sous-chef under Hiroyasu Kawate.

Tahara opened his restaurant with an all-Taiwanese team except for himself, and was listed in the top 50 restaurants within two years, despite his youth and lack of recognition. It’s a testament not only to Tahara’s ability but also to the broad-mindedness of the Asian restaurant industry that encouraged the birth of a new star chef.

This year, an extended list of 51st to 100th was revealed for the very first time. This may become a further catalyst for the emergence of new star chefs, because the list shows several trends that have never been seen before.

Last year, Natsuko Shoji, the owner of été, won Asia’s Best Pastry Chef Award 2020. This year, her restaurant was ranked 83rd. There is probably no other chef in the world who is famous for both her restaurant and pastries. The 31-years-old chef Shoji commented, “I still have a long way to go to reach the top.”

Then there’s Ken Sakamoto, the owner of cenci in Kyoto, and Kanji Kobayashi, the owner of Villa Aida in Wakayama, both of whom attended the ceremony for the first time.

Tenzushi Kyomachi which came in 71st place is located in Kitakyushu. Local gastronomy has been a worldwide trend for several years in the restaurant industry, with local restaurants gaining recognition as more tourists visit local areas.

From this vantage point, it can be said that the pandemic has brought the world closer despite the travel restrictions, opening up a variety of new ways in which both culinary creators and consumers experience food.

After being prevented from traveling for such a long time, what kind of food will the people seek once the pandemic is over?

Takanori Nakamura says that his longing for travel has been increasing exponentially. “I think the list will be looking very different next year and the year after.” According to Nakamura, consumers will choose food through a new thought process—seeking restaurants that provide access to unfamiliar food culture and valuing the humanity and character of the restaurant’s chefs. There will be a drastic change in standards.

How will restaurants in Japan and Japanese chefs increase their presence overseas, so that Japan’s gastronomy and aesthetic will be appreciated by the world?

The words of Ikuo Maeda, a car designer and managing executive officer of Mazda, the local event partner of Asia’s 50 Best Restaurants this year, left a deep impression.


Maeda told the audience, “I’ve worked in the car industry for a long time. This time I had the opportunity to see the world of food professionals and found myself relating to them in many ways because chefs and designers are very similar.”

He went on to add, “There are many things that we can do to show off Japan’s food culture and aesthetic to the world, but to face the global market as a creator requires more than an improvement in our skills. We also need to be able to communicate, because the world is our audience. Only those who compete by considering how to define their audience are worthy of the highest honor.”

This year’s list has raised expectations for Asia’s 50 Best Restaurants 2022, as the world quietly anticipates the revival of the restaurant industry.

Mr. Nakamura is Chairman of the World’s 50 Best Restaurants as well as a columnist. He was born in Hayama, Kanagawa Prefecture.  He has worked with magazines, newspapers, and TV, commenting on topics such as fashion, culture, gourmet, travel, hotels, and luxury lifestyle. In 2007, he received the title of Chevalier (knighthood) in Champagne, France. In 2010, he received a knighthood in Cava, Spain. Since 2013, Nakamura has served as the Chairman of the Japanese Board of Trustees of the World’s 50 Best Restaurants.

In other fields, Nakamura is a holder of Kendo Kyoshi 7th dan and an instructor for the Japan Tea Ceremony Association. He has co-authored The Cigar Life with Mamoru Hiromi (Ohta Publications) and is the author of Meiten Reshipi-no Junrei-shugyo Tsukutte Wakatta Ano-ajino Himitsu (A Pilgrimage of Famous Restaurant Recipes: Discovering the Secrets Behind the Flavor Through Cooking) (Sekai Bunka Publishing)

(This report first appeared on the website of Premium Japan. Find the story in Japanese at this link.)