Goodbye to the Future: The Last Days of Tokyo’s Nakagin Capsule Tower 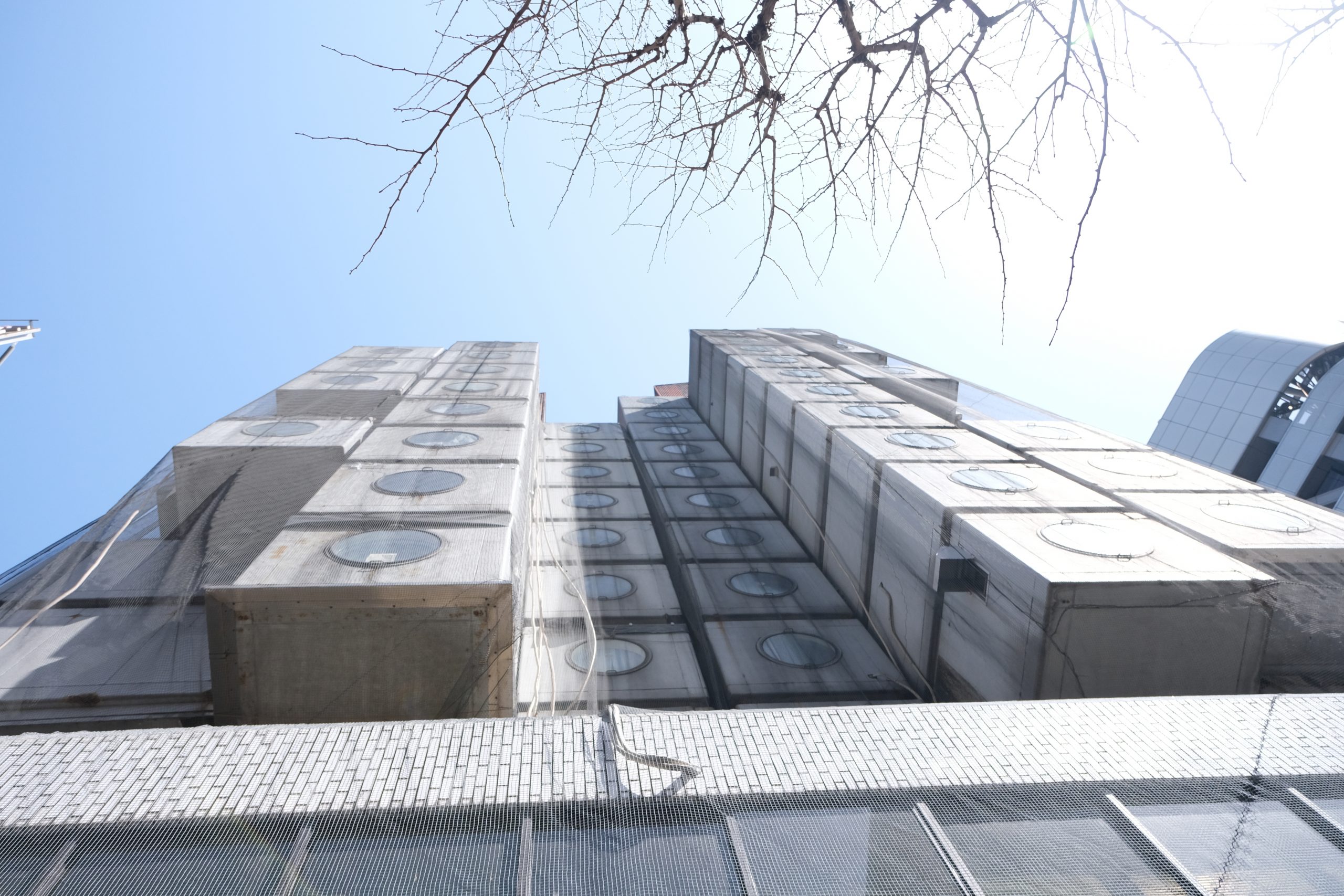 The metabolism that resisted change (Credit: photo by N.W.)

On the western fringe of Tokyo’s Ginza district, you can find a bizarre structure that looks like something from Logan’s Run or some other half-forgotten sci-fi movie of bygone years. It consists of an asymmetric pile of identical concrete boxes, each with a large circular window that stares out at the world like an impassive eye.

There are 145 of these boxes, which are living spaces designed by architect Kisho Kurokawa. In 1972, they were trucked one by one to the site from a factory in Shizuoka and bolted to the twin central towers. They have been hanging in the air there ever since.

This icon of Japan’s architectural avant garde is the Nakagin Capsule Tower. If you are interested in viewing it, you had better hurry. The word is that the new owner of the Nakagin company has secured enough votes from capsule owners to go ahead with a large-scale redevelopment scheme. The entire building and its unremarkable neighbors are destined for demolition.

Such a fate would be sad, but inevitable, and in some way instructive.

The Nakagin symbolizes the boldness and imagination of the era that spawned it, but also the impracticality. There are lessons to be learned from that too.

Kurokawa was a leading light of the “metabolist” movement, which believed that buildings should be dynamic and adaptable like the city itself. Thus, he envisaged the individual capsules being replaced every 25 years. Ironically, 49 years after the Nakagin was completed, not a single capsule has been replaced, while the city around it has changed out of all recognition.

In 1972, you could gaze out of your round window — inspired, apparently, by traditional tea ceremony houses — and gaze at the sun setting over Mount Fuji. Today, far from being the highest building in the area, the Nakagin is overshadowed by the enormous, ultra-modern Shiodome complex. Back then, indeed until the mid-1980s, that area was home to a sprawling railway freight yard.

Why haven’t the capsules been replaced? Their only point of contact with the rest of the structure are the two high-tension retaining bolts. Yet the tiny space — about six inches — between the capsules suggests that removing just one would be an excruciatingly difficult business. Water-pipes running through each unit would add to the logistical nightmare.

Effectively, all the capsules would need to be replaced at once, but such a communal decision has proved impossible to achieve, given the varying opinions of all the owners and the different states of repair of their capsules. The total cost per unit of a full refurbishment is estimated at around ¥10 million JPY ($92,000 USD), roughly the same as the current market value of a capsule.

Such human complexity was never part of the vision of the future favored by avant garde thinkers of the ’60s and ’70s. People would be as modular and uniform as the concrete capsules.


Seeking a Stake in Modernizing Japan

Kurokawa, who passed away in 2008, was an intellectual and something of a celebrity, particularly after his marriage to the luminous film star, Ayako Wakao, the Jeanne Moreau of Japan. The concept behind Nakagin, as set out in his book Homo Movens (“Man in Motion”), was highly ambitious and, in the context of the COVID pandemic, quite prophetic.

“Until now,” Kurokawa wrote, “home life, work and leisure have been separated into different spaces and geographical zones. However, with our twenty four hour days, life is becoming more complex and multi-layered.”

The Nakagin was his response — an assembly of identical pod-like living structures that, depending on the interior furnishings, could serve as “mini-offices, ateliers, hotels, homes, meeting rooms or holiday cabins.”

Any meetings would have had to be sparsely attended. The capsules are tiny, with an area of just 10 square metres. That is why the 2008 super-hero movie, The Wolverine, used the building’s memorable exterior to do service as a love hotel, but the interior scenes were shot elsewhere. At 6’3” (190 cm.), male lead Hugh Jackman could hardly fit into a Nakagin capsule, let alone perform a credible fight or love scene inside one.

In the building’s glory days, a staff of “capsule ladies” was on hand to tend to provide secretarial and other services. There are no cooking facilities. The windows are permanently sealed, and the plastic bath-and-toilet unit is about the same size as an airplane loo. Today, some of the capsules still retain the original fittings, including Sony reel-to-reel tape-recorders and dial-up phones.

The original selling price was just ¥5 million JPY (about $46,000 USD today), five times the average salary in 1972. Three quarters of the occupants were young “salaryman” businessmen, as Kurokawa had intended.

As time went by and real estate prices rose, the Nakagin attracted wealthy CEOs and doctors keen to own a fashionable pied-à-terre so close to the Ginza nightlife. Kurokawa himself, and then his son, also an architect, owned a capsule for many years.


Kurokawa’s Mark on the Future

Today, 20 of the capsules are used as residences, and some 40 as offices. The rest are empty. An Airbnb letting became a victim of the pandemic.

The hard core of remaining occupants, including one foreigner, are in the creative industries. They have had no hot water since 2008, when a pipe broke, but there are health clubs reasonably close at hand that some residents use. Their devotion to the building is admirable, but they are fighting a losing battle against the overwhelming forces of time, economics, and human nature.

In the words of French poet Paul Valéry, “The problem of our time is that the future is no longer what it used to be.” That is certainly the case with Nakagin, which looks more like a condemned building than a feasible living environment. The foyer is grubby. Tubes and wires protrude from empty capsules. Netting covers the entire exterior to protect pedestrians from falling debris. Capsule roofs and floors contain asbestos.

It is hard to avoid the conclusion that the metabolists failed because the buildings they produced weren’t metabolic enough to cope with the ever-changing needs of the city’s inhabitants. Surely, preservation of their work as some kind of cultural relic would be the last thing that the young radicals of the late ’60s and early ’70s would have wanted.

No matter what happens to the Nakagin Capsule Building, Kisho Kurokawa has made a lasting mark on Japan’s urban landscape. In 1979, he came up with a clever variation on his capsule concept by designing the world’s first capsule hotel. The Osaka Capsule Hotel still stands today, together with 300 other capsule hotels in Japan, making for a total of 34,000 capsule “rooms” available on commercial terms.

Clean, convenient, and cheap, capsule hotels are a great solution for non-claustrophobes who suddenly need a place to stay in the big city. Once the preserve of salarymen who had missed the last train back to the distant suburbs, they have become increasingly popular with single women and foreign visitors. Some offer sauna and massage, as well as more spacious, two-level capsules.

From the operators’ point of view, they are easy to open and easy to shut down or turn into something else, which makes them truly “metabolic.”

According to Jane Jacobs, the great thinker on urban planning issues, “There is no logic that can be superimposed on the city; people make it, and it is to them, not buildings, that we must fit our plans.”

With the capsule hotel, Kurokawa put those words into practice.