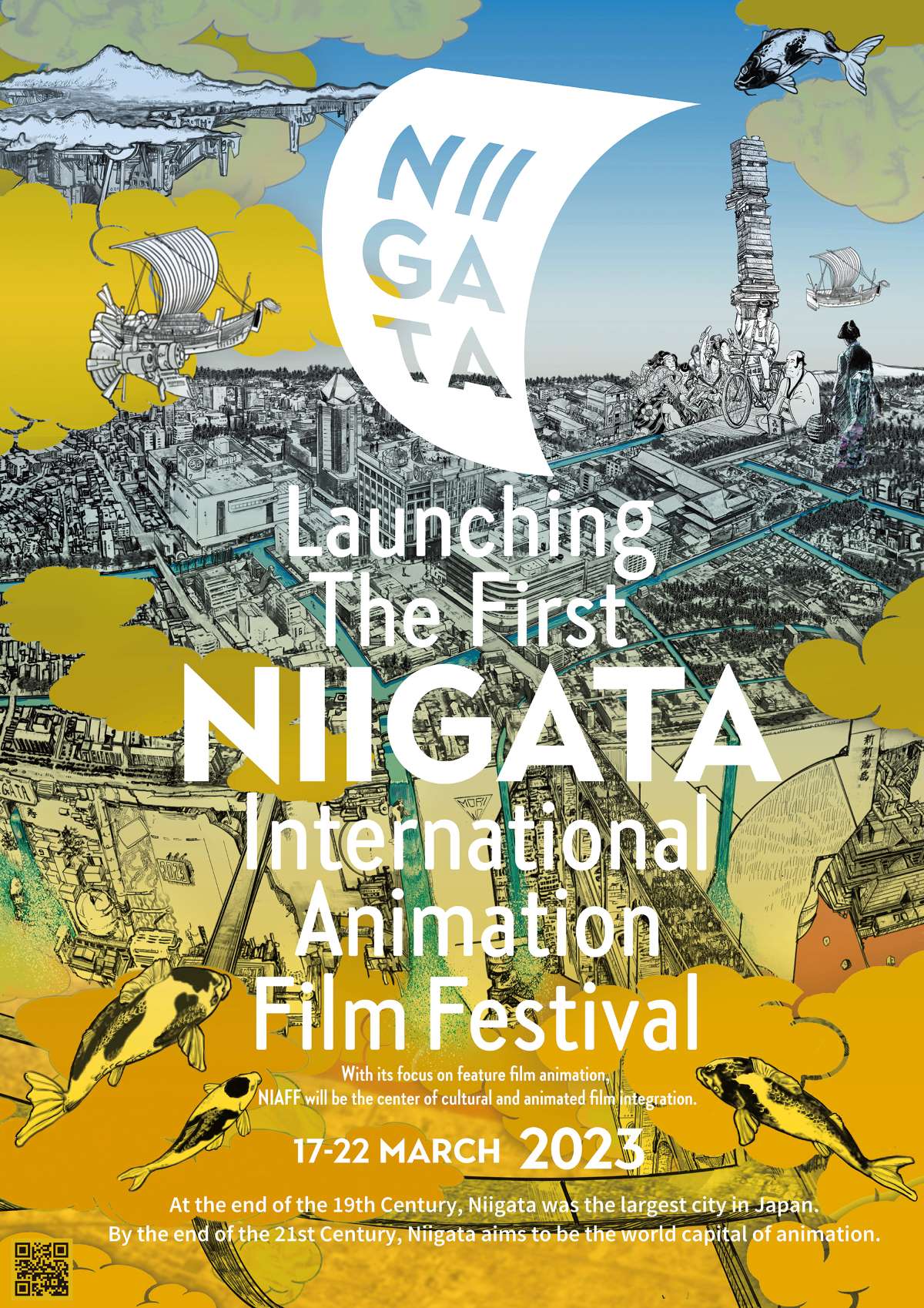 A celebration of feature-length animated movies to be known as the Niigata International Animation Film Festival will be held in Niigata City in March 2023, the sponsors announced.

This will be the first global film festival focusing on popular full-length animé works. By disseminating Japanese animé throughout the world, it aims to overcome divisions in the industry.

Mamoru Oshii, director of the animé film Ghost in the Shell (1995), will chair the judging committee. At the May 2022 press conference announcing the festival, he declared: “We will completely ignore box office statistics and the reputation of directors, and choose works that are truly creative and passionate.”

“These days, animé has become one of the cultural assets most representative of Japan, and Japanese animé can be seen anywhere in the world,” remarked festival director Shinichiro Inoue at the beginning of the press conference.

“However, today’s animé culture is split between business and art, domestic and international, experts and the masses. So it cannot be said to be fulfilling its potential,”  he added.

Inoue is the festival director, and a senior advisor at KADOKAWA, a global publishing business with a strong history in animé. According to Inoue, hopes are being pinned on this film festival as a means of helping to break down various divisions in the industry.

What is most important, he says, is the sharing of content globally and the development of human resources. Along with screening animated movies, the festival will also provide a place for the presentation of research on the themes of animé and comics by Japanese artists.

“The reason the films of Akira Kurosawa and Yasujiro Ozu have been lauded by the rest of the world is because Japanese film scholars have been presenting their research overseas. Unfortunately, that is not happening with research on animé. We hope the opportunity of this festival will help raise the status of animé,” said Inoue.

For a long time in the film world, short animé have been treated with importance because the creator’s unique characteristics come out just like they would in art or music.

Meanwhile, long films haven’t been given very much attention in film festivals for the reason that they are commercial. Even the Academy Awards in the United States only added a Best Animated Feature category in 2001.

“Until now, most competitions have focused on short art films,” reflected Oshii. “There were no competitions for long films.”

Meanwhile, audiences have been giving feature animé films, such as those by Studio Ghibli, considerably more attention in recent years.

Among the categories, there is Japanese animé, Hollywood CGI (computer generated imagery) with its huge production costs, and animation made with traditional techniques by European masters, for example.

Journalist Tadashi Sudo, programming director for the Niigata festival, said:“Feature films are now at the cutting edge of diversity in animé culture. However, no one has been looking at them from the same point of view as we do, so it all exists in a disconnected world.”

He added, “We want to offer a new viewpoint that overcomes the divisions.”

In the world of animation, the top four festivals were long considered to be those in Annecy (France), Zagreb (Croatia), Ottawa (Canada), and the Hiroshima International Animation Festival, which focused on short films. However, the Hiroshima festival ended in 2020.

The venues for presenting films have become concentrated in the West. So it is of great significance to be able to present artworks from Japan through creating Asia’s largest festival.

Aiming for the Long Term

Niigata has produced many animé-related creators, including celebrated comic creators like Shinji Mizushima and Rumiko Takahashi.

There is more to the track record, as the region has hosted previous events, like the Niigata Animé and Manga Festival.

Kenzo Horikoshi, the CEO of Euro Space and representative of the festival’s executive committee, said, “We want this to be a film festival that can be held for decades.”

Oshii expressed his hopes, saying: “While at the center of animé culture are the animé works themselves, various other aspects – such as voice acting, cosplay, figurines, and video games – are also revolving around this culture. We want this to be an event not just for the industry, but to also become a place where fans can gather and have fun.”

Content: Some 25-35 different works from both Japan and overseas will be screened.

Competition: In the Grand Prix and other competition categories, content will be accepted even if it was previously unable to be presented at film festivals, such as the film versions of TV animé series and internet-only content.

Target Films: This festival is aimed at long-form animated films over 40 minutes.

Submissions: Entries will be accepted starting in November 2022.