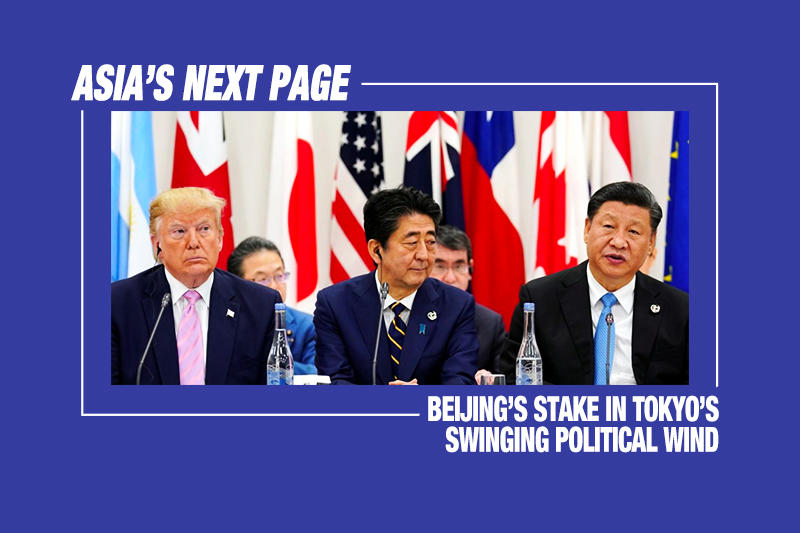 The strategic community in China is currently closely observing the swing political narrative that is fast emerging post Shinzo Abe’s resignation. What are Beijing’s expectations from the materializing political situation in Tokyo? And, how does China intend to shape the political narrative in Japan through its subtle diplomacy, or “influence operations” that are a critical feature of Xi Jinping’s “new era” foreign policy?

Post- Abe’s resignation, the Chinese Foreign Ministry spokesperson Zhao Lijian commented that China is “ready to work with Japan to continue to improve and develop bilateral relations”. Furthermore, the Chinese ministry also expressed an “appreciation” for Abe’s efforts in promoting bilateral relations between the two countries, while wishing him a speedy recovery.

The Ministry indicated that China was committed to the “principles and spirit” of the four Sino-Japanese bilateral political documents which have been created since normalization of ties between them in 1972 (revised in 1978, 1998 and 2008). A fifth document was set to be finalized during Xi’s visit to Japan earlier this year, which was cancelled due to the pandemic.

The Ministry further commented that China was ready to “deepen anti-pandemic, economic and social development cooperation” so as to sustain “sound” development of bilateral relations.

Official State media (including China’s English language Global Times) have emphasized that Japan’s gradually deteriorating stance towards China is a product of Washington’s influence over the country and Abe in particular, rather than Beijing’s own unilateral aggression as others claim. They have also subtly pointed out that Abe was a severely disliked person among the Chinese public owing to his attempts to reform the Japanese constitution and overturn the pacifist Article 9, his Yasukuni Shrine visit, his ‘bowing down’ to American leaders, and bolstering the ‘anti-China’ Quad alliance, Chinese state media has generally displayed a positive outlook for the future.

Concurrently, Chinese media has emphasized how Japan’s support would be crucial for China’s growth moving forward, and that Beijing must do all it can to highlight its trade partnership with Tokyo as a way of increasing the distance between Japan and the U.S.

Abe and Xi assumed their respective offices in 2012 within days of each other. At the time, Abe identified his major task as strengthening Japan to stand against an increasingly powerful China.

Under Xi, China’s revisionist tendencies are growing with the goal of global economic and political domination being high. Xi began to aim for a “Chinese Dream”, launched the ambitious Belt and Road Initiative (BRI) in 2013 (earlier known as “One Belt, One Road”), began to invest more in military spending and decided to revamp outdated economic models of growth to promote adoption of its models in foreign economies.

Similarly, Abe came to power focused on reviving Japan’s stalled economy, promoted a campaign slogan of ‘Take Back Japan’ (which Abe famously reworded in his 2013 CSIS speech as “Japan is Back”) and sought to re-arm Japan by seeking constitutional amendments for the Self-Defense Forces (SDF). The awkward first meeting between Xi-Abe in 2014 further exemplified the strains in Sino-Japanese ties, which were at their “lowest points” when Abe took over.

Maintaining this semblance of improving normalcy can be credited to Abe’s application of separating economics from politics under seikei bunri. This allowed Tokyo to implement a highly pragmatic China policy, even as Japan edged closer to the U.S. and India, strengthening its Indo-Pacific locus.

Abe took the lead in re-establishing the Quadrilateral Strategic Dialogue (Quad 2.0) and setting up the ‘Expanded Partnership for Quality Infrastructure’ (EPQI) as a counter to Bejing’s BRI. Under Abe, Japan followed a fine balance with China by acknowledging the economic benefits, while following a more security driven outlook in the maritime and larger Asia domain to protect national security.

Beijing and the Contenders for Tokyo’s Top Office

With Japan now being a major trading partner, China’s stakes in the race are high. Beijing’s primary wish is that the chosen successor will belong to Japan’s ruling Liberal Democratic Party (LDP) –under which China-Japan relations have drastically improved, as compared to ties under the Democratic Party of Japan (DPJ).

In this regard, it is important for China that Abe’s successor seeks to further the established policies, or at least not deviate from them in an anti-China manner.

Further, with militarization aims for the Quad taking a backseat amid Japan (and the U.S.’) domestic political struggles, the post-COVID maritime outlook for China seems more plausible, allowing it to continue its aggressive maritime posturing.

Although no official comment has been made, Beijing expects former Defense Minister Shigeru Ishiba, Environment Minister Shinjiro Koizumi along with some other LDP lawmakers to take up the mantle. Ishiba in particular has shown a swinging approach to China (in stark contrast to Abe’s own pragmatic one). For instance, a Japanese diplomat revealed that China believes Ishiba to be a more approachable and cordial candidate, who would likely adopt a “‘well-balanced’ diplomatic strategy” that would not hinder Sino-Japanese ties as he was not close to Washington.

However, Ishiba’s occasional support for China is also coupled with his more common publicly outspoken stand against Beijing. In July, while he was against canceling of Xi’s visit, he also openly lambasted China, with both instances revolving around abrogating the autonomy of Hong Kong.

Similarly, in his recently released policy recommendations for the LDP elections, while stressing greater cooperation with “like-minded” Asian nations, he has also stated that he will plan on establishing a “collective defense body” like the North Atlantic Treaty Organization (NATO). Nonetheless, this rather vocal stand against China resulted in him being a frontrunner for the prime minister’s position based on an early Kyodo News poll following Mr. Abe’s announcement.

Another prime-time candidate is Japan’s chief-cabinet secretary, who for long served as a right-hand man to Abe: Yoshihide Suga. It has been reported that Japanese strategic observers believe under Suga, improvement in Japan-China ties can be expected. Furthermore, Suga was tasked with releasing Japan’s move from the traditional ‘Hensei’ era to ‘Reiwa’ era, which furthered Abe’s nationalist foreign policy. Known in Japan as “Uncle Reiwa”, Suga’s close relationship and support for Abe makes it more likely that he continues the policies he helped ideate during Abe’s tenure. China’s Xinhua news agency stated that Suga is a “frontrunner” for the elections.

A Global Times article listed Fumio Kishida, Shigeru Ishiba and Taro Kono as top contenders who would vie for support from Abe’s own political faction within the LDP. (Note: Kishida, Ishiba and Suga have so far declared their intentions to run.) It also expressed hope that Abe’s successor would continued with a moderate China policy rather than one with confrontation and containment aspects.

Of the above-mentioned candidates, China sees Kishida and Suga as favorable to Beijing’s national interests. While both have made certain anti-China statements, Beijing believes these critical comments to be driven by a desire to gain favor with the LDP’s political leadership and win the election. Beijing especially sees Kishida as a candidate who would carry forward the moderate China outlook of former prime minister Kakuei Tanaka, since Kishida is now leading Tanaka’s political faction.

Notably, the Chinese media’s lack of comments on Kono’s candidacy suggest that Beijing does not view him as a favorable option – understandable, in light of his openly critical stance on China. In the Chinese strategy community, Kono is seen as a hawkish and nationalist leader in the post-Cold war period.

Abe’s successor will also likely be under greater pressure from both Washington and Beijing to take a more open stance with either of the countries as their rivalry intensifies. Owing to Abe’s long term in office, he had already crafted deep personal ties with critical leaders in the region, including Trump – who regarded the Japanese prime minister as the most trusted world leader.

Now, with a new leader in Japan – and possibly a new inhabitant in the Oval Office as well, U.S. and Japan will likely be rebuilding their diplomatic ties. Unlike Abe, the new Japanese prime minister may not be able to weather domestic pressures in pushing forward unpopular legislation such as a reversal of Japan’s pacifist Occupation era constitution or making space for U.S. medium-range missiles. This is especially true in light of the upcoming Japanese general elections next year (September 2021).

Therefore, as U.S.-Japan relations pause momentarily, China recognizes an opportunity to push forth its own agenda and leverage a neutral, if not favorable, diplomatic strategy in Tokyo.