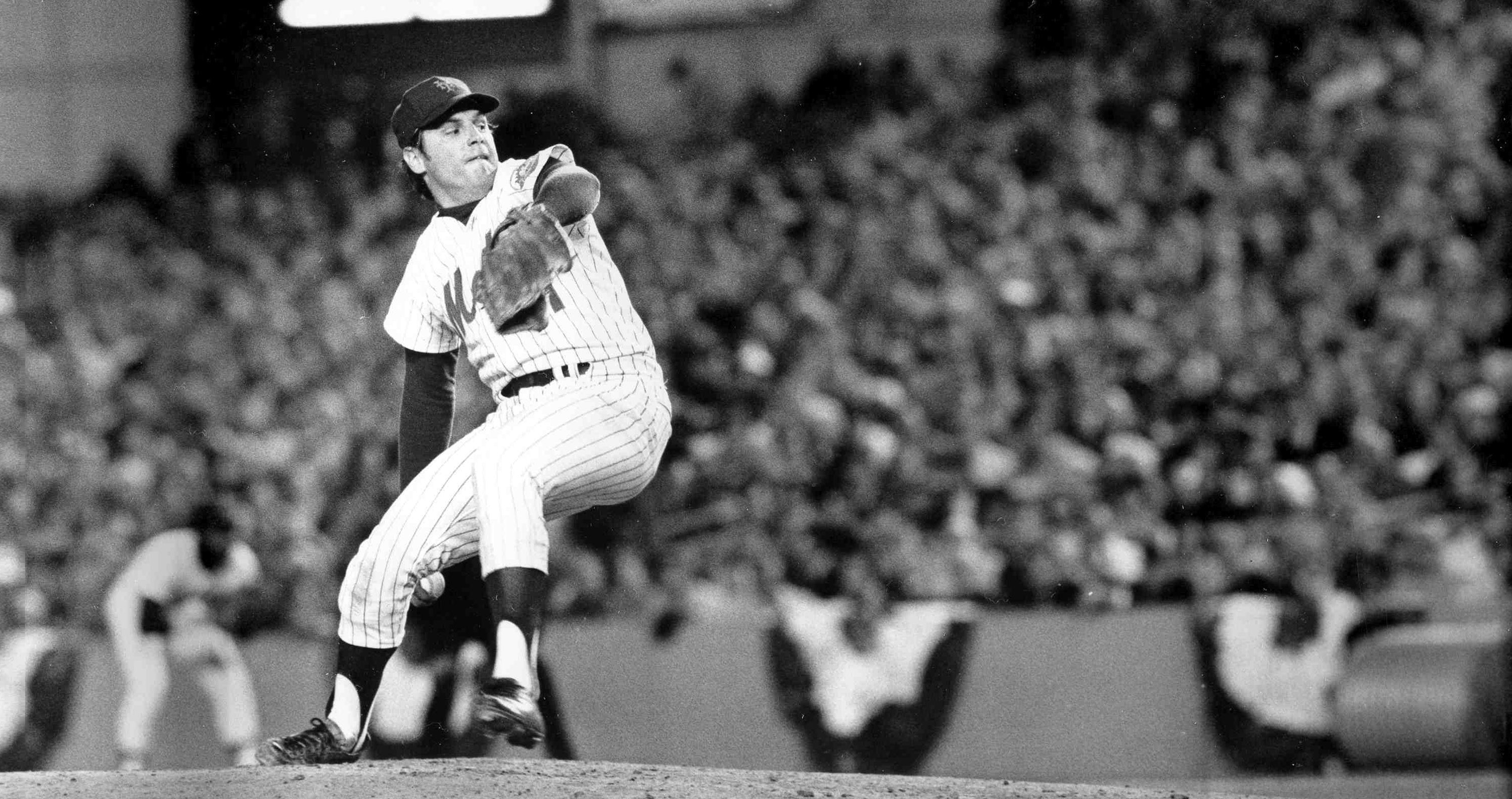 Baseball great Tom Seaver, who passed away on August 31 at age 75, left an indelible mark on the game. Considered one of the greatest pitchers of all time, Seaver was well liked by teammates, opponents and baseball executives throughout Major League Baseball during his Hall of Fame career.

Many other TV networks and programs did, too. Former baseball players, coaches and managers and current pundits and columnists provided numerous remembrances of Seaver in the days after he passed away, focusing on his jaw-dropping statistics (311 career victories, including five 20-win seasons, 3,640 strikeouts and three National League Cy Young Awards) and incredible impact on the Mets organization. He also pitched for the Cincinnati Reds, Chicago White Sox and Boston Red Sox in a 20-year career.

For this longtime sports reporter, Seaver’s intellect as a pitcher and his ability to explain the nuances of his craft also shined through when re-examining a large stack of articles from the 1960s, 1970s and 1980s. For example, it was fun and revealing to look closely at Seaver’s comments during the New York Mets’ 18-game goodwill tour to Japan in the fall of 1974.

Seaver made his first pitching appearance in 26 days in the Mets’ first game of the tour on October 26 before a packed house of 50,000 at Korakuen Stadium against the Giants. He worked the first three innings and left the game with a 3-0 lead.

Tom Seaver was featured on the ticket stub.

In between exhibition games against the Yomiuri Giants and an NPB All-Star squad, Seaver had the spotlight one day before an attentive gathering of baseball aficionados.

Joseph Durso of The New York Times reported on a pitching clinic at Maruyama Stadium in Sapporo in November 1974. Seven Giants gathered around Seaver as he dispensed advice, and fans also listened closely while Yomiuri Giants coach Shigeru Makino translated.

“They stood in a quiet semicircle on the center field grass in Maruyama Stadium beneath majestic mountains colored in the yellow and red of autumn,” Durso wrote. “Expensive chalet homes snuggled into the slopes leading to the ski jump built for the 1972 Winter Olympics. In parkas and coats, the early arrivals began to crowd the gentle hill beyond the outfield fence at the foot of the mountain, spreading blankets on the cold grounds to watch for the next four hours while the Giants and New York Mets brought their traveling goodwill tour north. Wood-burning heaters warmed the players in the dugouts and Sapporo beer warmed the customers who had paid $10 for box seats.”

Inside Maruyama Stadium, Seaver kept his message simple. He explained how he did his job.

“I throw four pitches,” Seaver was quoted as saying. “Fastball, curveball, slider, changeup. Very basic. I don’t have a good changeup, but I work on it all the time. The thing to remember is you must maintain your arm speed and keep your elbow up.” 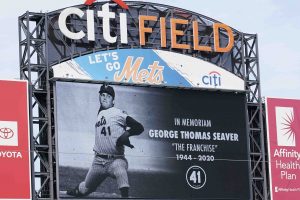 A tribute to New York Mets pitcher Tom Seaver, who died on August 31, is displayed on the scoreboard before the start of a game against the New York Yankees at Citi Field on September 3 in New York. (Kathy Willens/AP)

As the ace of the Mets pitching staff, Seaver was the driving force behind the team’s World Series appearances in 1969 and 1973, with the team’s championship in ’69 in his third season in the big leagues stamping his place in the history books as “Tom Terrific.” He was known as “The Franchise,” a nickname that needed no introduction.

Seaver’s pitching motion relied heavily on leveraging the power in his legs as he stood on the mound. He generated considerable power with his lower-body strength, and each and every game produced the same trademark proof: a large amount of dirt near the right knee on his uniform pants.

Other pitchers rely more on their arm, elbow, shoulder and upper-body power. They often develop injuries to those body parts. Seaver, on the other hand, stayed relatively injury-free throughout his career, which was a clinic in durability (647 starts, 231 complete games. See Seaver’s  full statistics here.)

In his comments to the Giants hurlers, Seaver discussed what he had witnessed at the ballpark while seeing them in action during his trip to Japan.

“One thing I notice,” Seaver said, according to The Times, “is that you don’t use your legs as you should. You’ve got to use the muscles in your thigh to drive with your legs. The left side is very important, too. It opens up your motion and gives you speed in swinging your body. One thing your pitchers do very well is that they are deliberated in winding up. They don’t rush. They wait and then explode toward home plate.”

Seaver then made an interesting observation, dishing out advice to the Japanese pitchers at the same time. 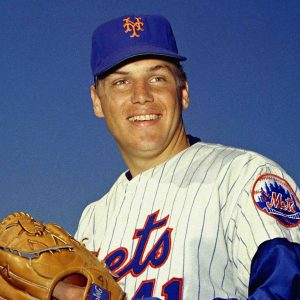 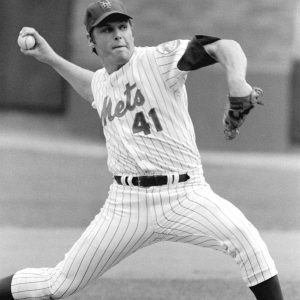 Seaver won 311 games in his Hall of Fame baseball career. 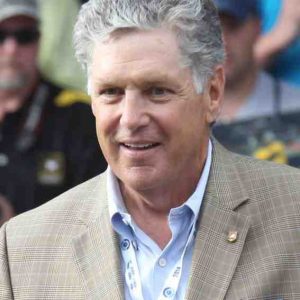 Then there was a memorable exchange between Seaver and a Giants player.

Durso reported the scene this way: “One of the Giants catchers, who was eavesdropping, asked if he should change his position behind the plate.”

“Never,” said Seaver, “not even in practice. The pitcher should form a vision in his mind of where he wants to throw the ball, then he pivots and brings the batter into his sight as he wheels [and delivers]. It’s all up here, in your head.”

Sustained excellence was a hallmark of Tom Seaver’s career. Another trademark: He knew what he was talking about when the subject was pitching. And that was on display during the New York Mets’ visit to Japan 46 years ago.

In 1978, Seaver returned to Japan with the Reds as part of another goodwill tour. It was another opportunity for the pitching maestro to showcase his talents to fans on the other side of the world. 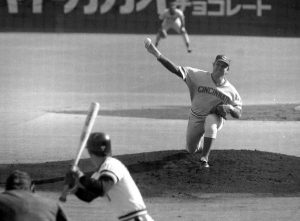 Reds hurler Tom Seaver pitches during an exhibition game in Japan in the fall of 1978.