[Asia’s Next Page] Biden and the U.S.-Japan-South Korea Trilateral 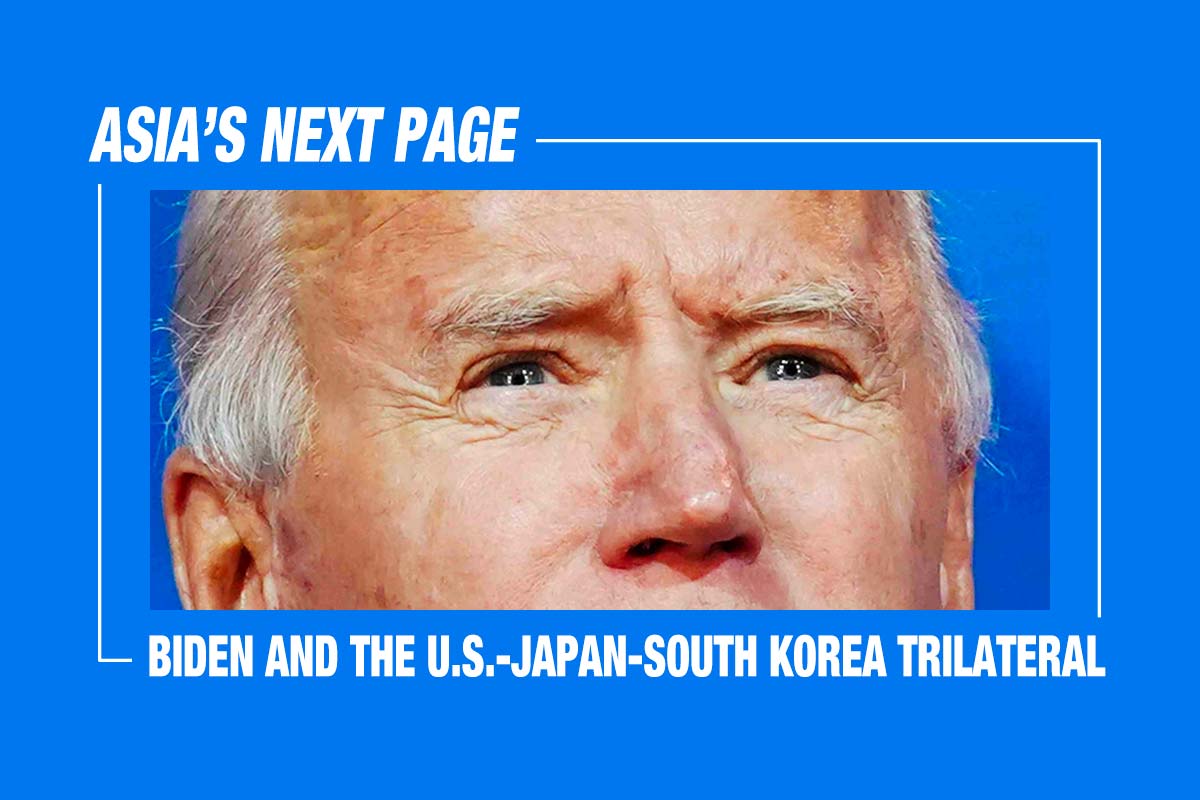 The realization of a “comprehensive trilateral relationship” between the United States (U.S.) and its two allies – Japan and South Korea – has long been a strategic objective of American foreign policy. President-elect Joe Biden’s foreign policy agenda, which promises to be significantly different from President Donald Trump’s “America First” approach, harbors the same goals. It refocuses on a future underpinned by strong U.S. alliances, reconstitutes America as an active power in Asia and prioritizes reinstating U.S. leadership on the global stage.

However, the Biden administration is bound to face a tremendous challenge in revitalizing the U.S.-Japan-ROK trilateral partnership that is marred by poignant historical grievances between Seoul and Tokyo. Amidst such a scenario, how can Biden shape the trilateral and bilateral ties between the three nations to achieve mutual growth and security in a tightly contested geopolitical landscape? 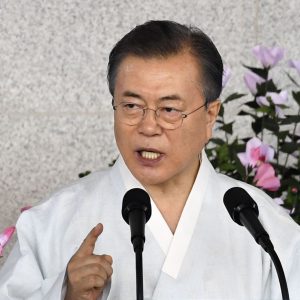 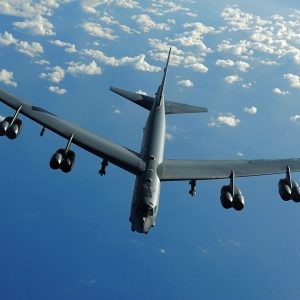 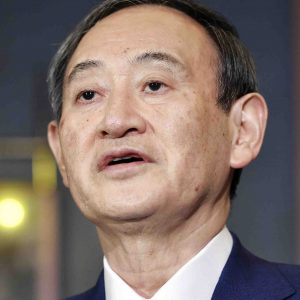 While the fundamental historical grievances between Japan and South Korea are not linked to the U.S., geo-political realities have put Washington at a pivotal position vis-a-vis Tokyo and Seoul’s bilateral ties. Furthermore, it is by reinvesting in treaty alliances the U.S. shares with countries like Japan and South Korea that Biden hopes to fortify collective democratic capabilities against security challenges arising from China, North Korea and even Russia, thereby rebuilding a U.S.-led liberal international order.

The importance accorded to Japan and South Korea is evident even in the early days as Biden prepares to move substantially away from Trump’s policies that resulted in considerable deterioration of U.S. ties with its allies. In two separate calls after winning the election, Biden reassured Prime Minister Yoshihide Suga of Japan and President Moon Jae-in of South Korea of his commitment to the alliances the U.S. shares with the two nations.

Biden also reassured U.S. allies of his continued support in ensuring regional security, while committing to achieving a “Free and Open Indo-Pacific”.

Although Biden’s usage of the term “Indo-Pacific” suggests a broad continuity of the Trump administration’s Indo-Pacific Strategy – in synergy with Japan’s Free and Open Indo-Pacific (FOIP) vision – it is likely to be tweaked as a less combative and more calculative outlook, corresponding to South Korea’s hesitant stance towards the Indo-Pacific construct.

Essentially, Seoul has shown reticence in accepting and endorsing the Indo-Pacific terminology and concept. Seoul considers the same as being associated with an anti-China narrative, which stands as a major deterrent behind Seoul’s limited endeavors in the region.

Biden seeks to formulate a foreign policy approach that is a variant of Trump’s Indo-Pacific strategy and sustains certain elements of Obama’s “Pivot to Asia”, such as putting like-minded democratic alliances at the center. The Biden administration acknowledges the cruciality of balancing the reaction of its allies, while at the same time furthering its own strategic interests in the region.

Furthermore, Biden’s cabinet picks – Antony Blinken as his Secretary of State and Jake Sullivan as his National Security Advisor – are of particular significance in demonstrating the reorientation of Asia at the front and center of U.S. policy.

Blinken is known for having been a major player behind the promotion of stability of the U.S., Japan and South Korea tripartite alliance. His background as a veteran diplomat will make the administration better equipped to deal with the nuances in the South Korea-Japan bilateral relationship, with ties between the two nations deteriorating under Trump on trade and historical issues. Blinken played a crucial role in alleviating the Japan-South Korea ties during the Obama era, particularly during an estrangement episode in 2015, by initiating the first trilateral consultations between the three allies at the Vice Foreign Minister and the Deputy Secretary of State level in April of the same year.

Concurrently, Sullivan was a key member of the Obama administration, with experience in both the White House and the State Department. Considering Biden’s statement that Sullivan “played a key role in the Asia-Pacific rebalance” strategy under Obama, it is likely that Sullivan will be acutely focused on strengthening U.S. ties with like-minded allied powers like Japan and South Korea – further hinting at a forthcoming revamped Indo-Pacific outlook under a Biden-led U.S.

Nonetheless, the Biden administration will have to contend with critical challenges prevalent in U.S. bilateral ties with both Tokyo and Seoul, which have only grown more complicated amidst Trump’s transactional foreign policy approach and an intensifying geopolitical competition in the East Asian and Indo-Pacific region.

Trump regularly stated that Japan and South Korea were exploiting Washington in their “unfair” cost-sharing defense agreements, which allow the U.S. to station American soldiers within their territories. Subsequently, he asked them to “pick up a larger share of the burden” by demanding additional payments of $8 billion from Japan and $5 billion from South Korea within the construct of their bilateral agreements.

He also pulled the U.S. out of landmark multilateral economic arrangements – such as the Comprehensive and Progressive Agreement for Trans-Pacific Partnership (CP-TPP) – while disregarding international and local institutions such as the Association for Southeast Asian Nations (ASEAN). This created friction in U.S. bilateral ties and put the already fragile tripartite at further risk. Biden must take a more pragmatic stance and prioritize minimizing tensions to reinforce stronger alliances in the region vis-à-vis China.

China’s rising aggressiveness, unilateralism and revisionism in the regionーand the challenge it poses to U.S. global leadershipーis indisputably the biggest concern for Washington at present. Amid such tensions, Japan and South Korea have become extended arms of the U.S.’ Indo-Pacific outreach.

Biden must make an effort to coordinate U.S. policy with that of Japan and ROK in order to present a firmer stance in face of threats to the rules-based liberal international order. Biden’s assurance to Suga that their bilateral security alliance covers the East China Sea and the contested Senkaku Islands – a move China was quick to denounce – was critical in reassuring Tokyo of continued and unwavering U.S. support. Similarly, in the call with Moon, Biden reaffirmed his intentions of working towards the creation of a peaceful Korean Peninsula.

There is bilateral consensus regarding the national security threat posed by China and North Korea. Therefore, while Washington’s policies may change in their subtleties, they are unlikely to change overall. In other words, Biden is unlikely to take a soft stand on either Beijing or Pyongyang.

With respect to North Korea, Biden is expected to take a more traditional approach. Following a ‘principled diplomacy’ strategy, the President-elect will seek to pressurize North Korea towards denuclearization, while also promoting a reunified Korean Peninsula. Considering the summits between Trump and North Korea’s Kim Jong-Un that yielded no results, Biden’s approach in dealing with Pyongyang could help bring North Korea to the negotiating table and engage in more meaningful and substantive consultations.

Regardless of tactics, to succeed in his goal of re-establishing U.S. leadership, Biden must seek closer trilateral cooperation with Tokyo and Seoul, with closer alignment in their foreign policy agendas respecting shared threats.

Stabilizing U.S.’ bilateral ties with Japan and the ROK, as well as bolstering their trilateral synergy, is a matter of fundamental importance not just to Washington, but Tokyo and Seoul as well. Both East Asian states are increasingly caught in a precarious geopolitical environment in which their security alliances with the U.S. are all the more paramount. Biden’s election thus provides both states a chance to renew ties with the US and initiate a new chapter moving forward.

At the same time, Japan and South Korea must also make every effort to set aside their historical grievances and “focus on the future” ーas Japan’s newly elected leader, Suga, suggested in a letter to Moon. Yet, this sentiment has not been translated into Tokyo-Seoul diplomatic ties, with Suga declining to visit South Korea unless their wartime labor row was resolved. The time for South Korea and Japan to proceed forward has arrived. With an increasingly belligerent China and armed North Korea at their door, engaging in dedicated dialogue with or without tertiary powers like the U.S., becomes crucial.

The onus of promoting friendly ties, driven by pragmatism and a security-focused outlook, will fall on the U.S. Biden must engage more deeply with both countries in a balancing act that promotes U.S. alliances with Tokyo and Seoul, while also encouraging beneficial exchanges between the two countries. For instance, Biden must look towards reinforcing Japan-South Korea cooperation under their tripartite General Security of Military Information Agreement (GSOMIA), so that it becomes a deeply embedded aspect of their foreign policies and a cornerstone of their trilateral security partnership.

There are, of course, limitations to the U.S. role as a mediator in Japan-South Korea ties. Despite Biden’s attempts to to assuage the rather complex historical dispute between Japan and South Korea, success might be unlikely. Nevertheless, continued U.S. efforts to ensure open dialogue and diplomatic exchanges between Seoul and Tokyo will be crucial to regional – and by extension, global security.

Dr. Jagannath Panda is a Research Fellow and Centre Coordinator for East Asia at the Manohar Parrikar Institute for Defence Studies and Analyses, New Delhi. He is the Series Editor for “Routledge Studies on Think Asia”. The opinions expressed herein are those of the author and do not necessarily reflect the views of any organization with which he is affiliated. Find him on Twitter @jppjagannath1