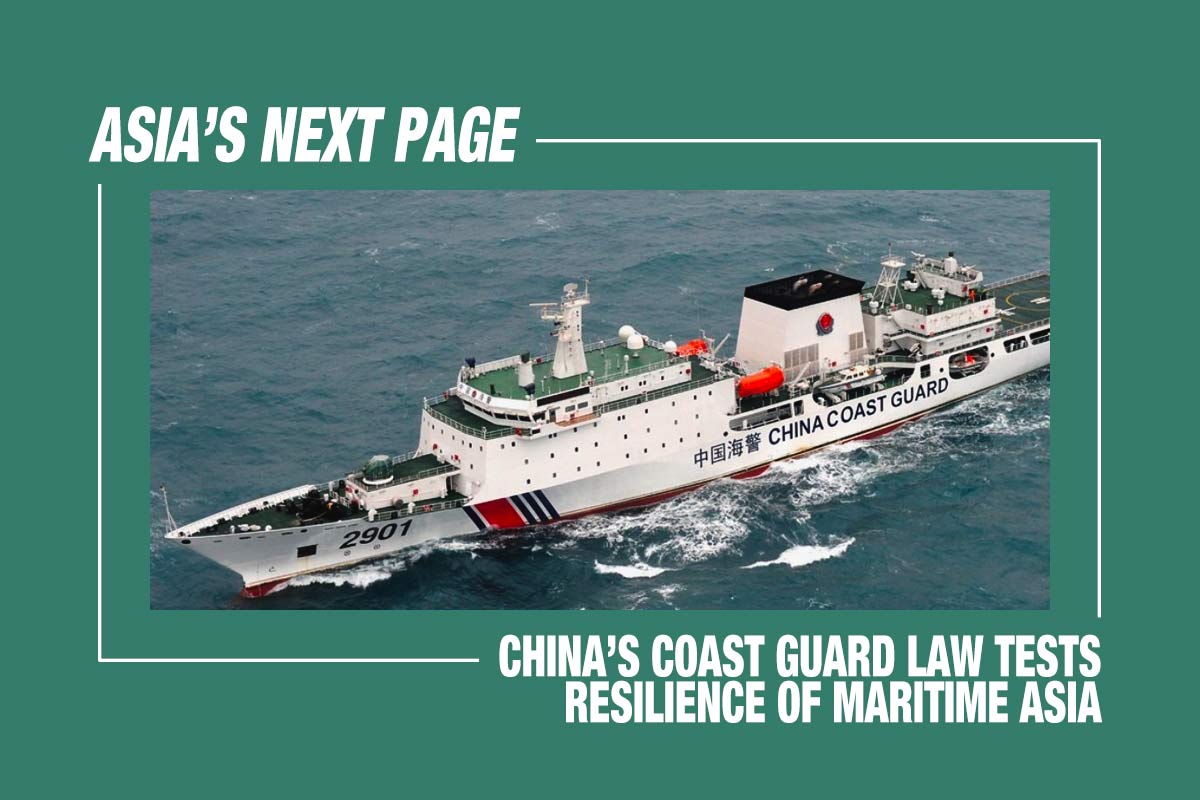 China has long sought to cement its dominance over Asia’s maritime region, being party to several disputes in the East and South China Seas and stretching its naval presence to the Indian Ocean.

Considering that China has far-reaching and highly contested claims under its “nine-dash line”, the law essentially provides the CCG extensive powers over competing claimant nations. Its extra-territorial nature will allow the CCG ー and the People’s Liberation Army Navy (PLAN) ー to use “all necessary means” to forcibly remove unauthorized foreign presence, but also any structures built by other states.

Hence, the law purportedly shields China’s sovereignty, national security and maritime rights while strengthening its stronghold over the Indo-Pacific. Furthermore, the law once again puts Beijing at-odds with Brunei, Taiwan, Japan, Malaysia, the Philippines and Vietnam, by being a “verbal threat of war” to any state that defies it. How will it impact the already delicate maritime dynamics in Asia?

Although the new law could be interpreted as a conventional advancement of the CCG in line with that of other states, it must be perceived from a different view, considering the rather military nature of the CCG.

While Coast Guards generally play a constabulary role and are equipped with basic automatic weapons or medium-type deck firearms, the CCG has been a part of the People’s Armed Police and under the Central Military Commission’s command since 2018. It acts as an element of the Chinese military by reinforcing China’s maritime claims.

In its capacity as oceanic police, the CCG investigates maritime territorial violations and crimes. At the same time, the CCG implements all applicable sea laws passed by China, including marine environment protections and fishing rights.

The new coast guard law accentuates the unit’s military component, focusing on its patrol of waters under China’s jurisdiction by “preventing, stopping, and eliminating acts that endanger China’s sovereignty, security, and maritime rights and interests” (Article 12). It allows the CCG  the power to “take all necessary measures, including firearms” – ultimately allowing the use of shipborne or airborne firearms (Chapter VI) –so as to carry out its duties.

Another crucial and extremely alarming component of the new law pertains to the CCG’s role as maritime police. It specifies that if a party, in an attempt to “evade administrative penalties”, resorts to “dumping evidence overboard”, making it difficult for the Chinese maritime unit to adduce evidence, the CCG can “presume certain facts are established” (Article 35) unless the opposing party rebuts the same with evidence.

This, thereby, removes the onus of explaining its actions from the coast guard and instead places it on to the foreign party. Since most of the common scuffles between China and other claimant states like the Philippines, Vietnam and Japan (in East China Sea) revolve around fishing, such a proof-creating, proof-demanding provision puts local fishermen and fishing ships –if not civilian coast patrols –at grave risk of capture or more.

The new law poses grave concerns for maritime Asia. Only a week after its passing, China dispatched its biggest maritime patrol vessel Haixun 06, to “patrol and offer services in the Taiwan Straits”.

However, as the Taiwan Straits are a “high-risk area” supervised by China’s Ministry of Transport instead of the CCG, the advancement further demonstrates that the new law is a dangerous one. Not only does it permit the coast guard to utilize force, but it also communicates Beijing’s goal to seek “near-seas defense with far-seas protection” by molding public assets and ministerial resources along the lines of the Coast Guard to accomplish full control of China’s near-sea locales.

Haixun 06’s new parameters show that this operational jurisdiction will expand into the Taiwan Strait. By enhancing a civil-military mixing, the coast guard’s national defense mobilization will strengthen further.

Potential for conflict in maritime Asia further increases due to the lack of definitional clarity over the term ‘jurisdictional waters’. Disputing claimant countries like Japan, Vietnam, the Philippines and more have voiced strong concerns over the law. While Japan debates how to respond to the same, with a push to focus on Senkaku’s security reigniting amidst the Suga administration’s focus on domestic troubles, a call to abide by international maritime laws by Vietnam, Malaysia, the Philippines and more has already been voiced.

Nonetheless, with countries in Southeast Asia struggling with the economic impacts of the COVID-19 pandemic ー amidst further governmental conflicts such as the coup in Myanmar ー the timing of the introduction of the law has been overshadowed by more immediate security and economic threats.

The law also further complicates the base debate regarding a much-needed and revamped code of conduct between the Association of Southeast Asian Nations (ASEAN) and China. The 2017 draft focuses solely on naval ships and aircraft, but now must be expanded to cover coast guards.

The new Chinese coast guard law not only presents significant threats to maritime Asia, but more importantly, shows disregard for the provisions of the United Nations Convention on the Law of the Sea (UNCLOS) to which China is a party. While China’s Foreign Ministry spokesperson Wang Wenbin has reiterated that the “relevant contents of the draft are in line with international conventions and practices of many countries” and that “China’s policy and position on maritime issues remain unchanged”, the coast guard law skates a thin balance bordering on violations vis-à-vis UNCLOS.

For starters, the vagueness of the concept of what constitutes “jurisdictional waters” in the new coast guard law in itself clashes with UNCLOS, which states that the same are internal waters, territorial sea, contiguous zones, exclusive economic zones (EEZ) and the waters of the continental and extended continental shelf. This very conflict in definition has been a major determining factor behind China’s clash with UNCLOS vis-à-vis its nine-dash line as well.

Such inherent ambiguity in Chinese perception versus international law, combined with the new law’s authorization of force, makes the conflict in maritime Asia vis-à-vis China’s disputes with other claimant nations essentially inevitable. It provides critical tools to engage in unilateral actions in the East and South China Seas to not only the CCG but also the PLAN.

Article 20, which allows obliteration of any construction as an “illegal activity” within its claimed maritime territory, is likely targeted explicitly at Japan’s infrastructure developments around the Senkaku islands. On the other hand, based on its post-war constitution, Japan’s coast guard remains a civilian body with a non-military status, even during an armed conflict scenario. This gives the CCG a major advantage and makes China’s military might a pre-eminent national security threat for Tokyo.

Beijing’s Maritime Prowess in the Indo-Pacific

Simultaneously, the new law must be viewed against the backdrop of Beijing’s rising maritime prowess, Xi Jinping and the CCP’s changing domestic dynamics, regional geopolitics vis-à-vis rising Quad synergy, a U.S.-Japan maritime alliance and Europe’s tilt towards the Indo-Pacific.

2021 marks the centenary anniversary of the CCP. In keeping with its goal to “build a moderately prosperous society”, the coming year will be a critical one for the CCP as it attempts to highlight its successes and China’s rise under its rule to both domestic and international audiences.

It will also be a test for Xi Jinping, who stands to be elected to a third official term, since term limits were removed, and cement his position in Chinese politics comparable to Mao Zedong. Therefore, the law is a rather bold move by Xi and the CCP to assert Chinese power in the international maritime arena.

The fact that it comes in the early days of Joe Biden’s presidency, as he seeks to rebuild the U.S.’s international alliances and Washington’s status as a leading global power, seems to indicate that the CCP is looking to test the Biden administration’s resolve vis-à-vis China, and U.S.’ commitment to its allies. Similarly, the law also comes as a test of the Quad’s capabilities to coordinate a response to Chinese assertiveness and its blatant ignorance of international laws and norms.

In essence, the new coast guard law posits Beijing as a firmly established maritime power. It adds to the PLAN’s already impressive capabilities and strengths while giving its CCG unprecedented powers.

China’s growing assertive behavior on maritime domain is not entirely a new development. In fact, it has only increased exponentially in the past year as states across the region and beyond were preoccupied with the COVID-19 pandemic.

2020 saw China repeatedly foraying into disputed waters and putting Indo-Pacific nation-states on high-alert. The new law will now authorize what has become China’s maritime militia to use force on foreign vessels ー dramatically raising the risk of an all-out conflict amid an already tensed geopolitical and security landscape in the region. Therefore, it is a staunchly destabilizing move, and one that will require Indo-Pacific powers involved (whether directly or indirectly) in a maritime dispute with China to recalibrate their oceanic policies and coordinate a response to the same.

The Quad powers must not only look for ways to challenge China’s new coast guard law in the international legal framework, but also urgently build their capabilities through increased joint exercises (both navy and coast guard drills) in order to balance out the rising Chinese belligerence.

Dr. Jagannath Panda is a Research Fellow and Centre Coordinator for East Asia at the Manohar Parrikar Institute for Defence Studies and Analyses, New Delhi. Dr. Panda is the Series Editor for “Routledge Studies on Think Asia”.