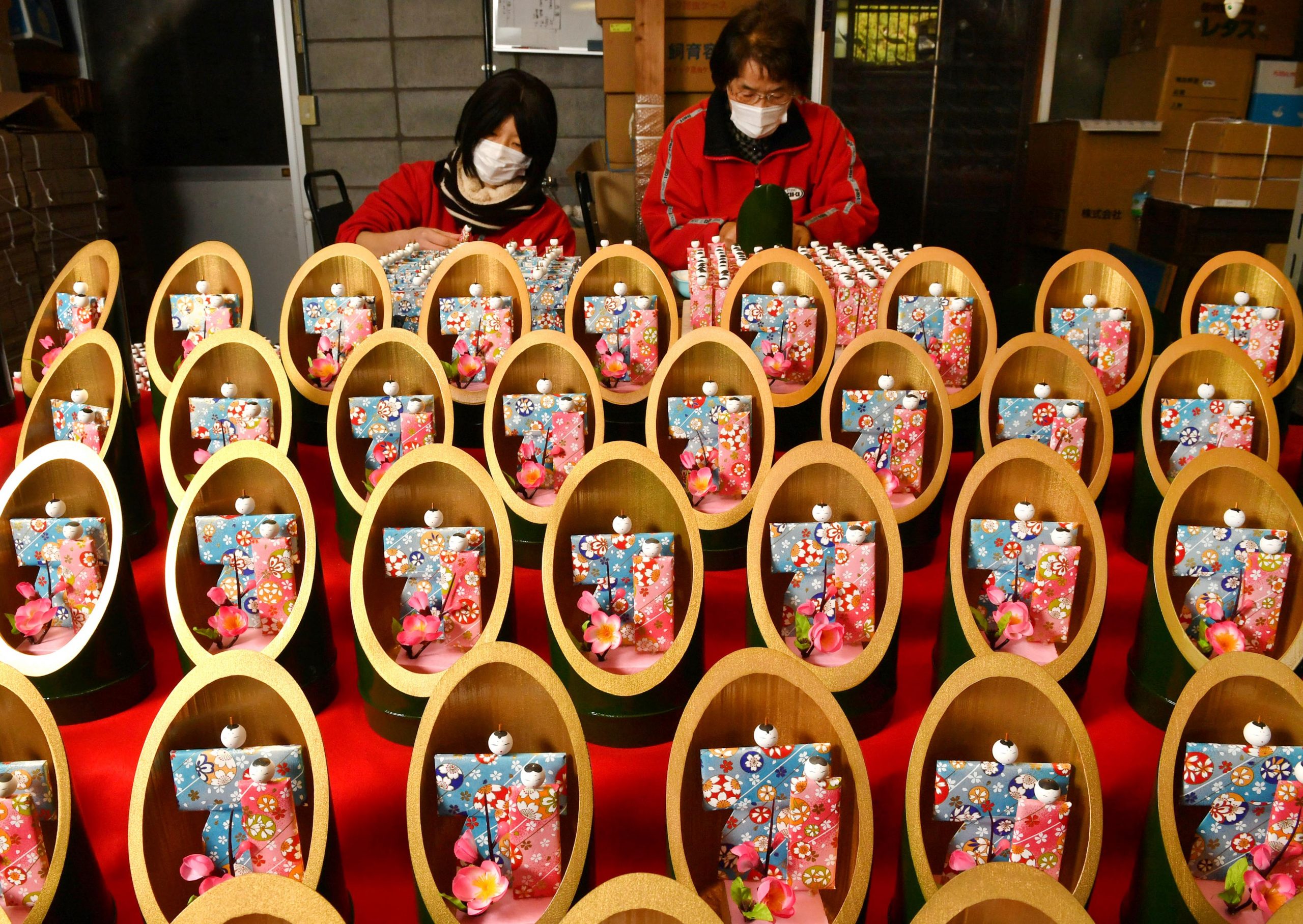 As we approach March 3 in Japan, the decorations for Hinamatsuri start appearing. Families celebrate this festival to wish for the good health of girls by displaying decorative dolls for the month leading up to the special day.

Usually these decorations are made out of lavishly dressed dolls in the shape of an emperor, empress, and various attendees of a Heian-era style banquet. Displayed on a luscious red carpet, these dolls can be very bulky and expensive. But these days compact elegance seems to be the trend.

In a small shop in Kamigori, Hyogo Prefecture, a craft shop called Matsui Kogeisha is putting its own twist to Hina Ningyo, literally meaning princess dolls.

This shop makes Hinamatsuri decorations based on the story of Princess Kaguya. She is the protagonist in a famous Japanese tale said to date back to the tenth century, called “Taketori Monogatari”.

The name roughly translates as “The Tale of the Bamboo Cutter.” It is so popular it has even been made into a Studio Ghibli anime film. As it happens, the original tale tells of a bamboo cutter noticing a shining stalk of bamboo and upon cutting it, finds a beautiful baby girl, who will become Princess Kaguya.

The Hinamatsuri decorations in this shop reflect this popular story. Called Kaguyabina (from the combination of kaguya and hina), the two washi paper dolls of a prince and princess wearing a kimono are placed aesthetically inside a cut section of bamboo.

The faces of these hand-made dolls have a very soft hand-drawn expression. They are compacted into a miniature decoration which is only 20 centimeters high and 12 centimeters wide, magnifying even more the delicate feeling of the fable encapsulated in these ornaments.

One can even get a Kaguyabina featuring a music box and traditional spherical Japanese toy called otedama for ￥5,800 JPY (about $52 USD).

On a regular year the shop produces about 1,000 of these dolls all the way until the end of February, and ships them all over the country.

The founder of the shop, 83-year-old Hiroshi Matsui, is of course not indifferent to the fact that this year is not a regular year. He commented to The Sankei Shimbun and JAPAN Forward: “As the impact of COVID-19 continues, we are doing our utmost to fill our creations with warm feelings for our customers, and we hope that this sentiment can be received by people all over Japan.”

Interestingly, if you do buy this doll set, remember to promptly pack the decoration away come March 3. Rumor has it that if you delay until March 4, the girl in the family might not get married.

For the anime enthusiasts, you might have noticed that in the Oscar-nominated Anime film directed by Mamoru Hosoda called Mirai no Mirai, part of the storyline involves the main character trying to pack away beautiful dolls which the father forgot to put away, so that the daughter will not suffer as a consequence.

For a small object filled with history, tradition, and even motifs present in animation films, why not contact Matsui Kogeisha (まつい工芸社) in Hyogo Prefecture? They can be reached at the number +81 791-52-3913.