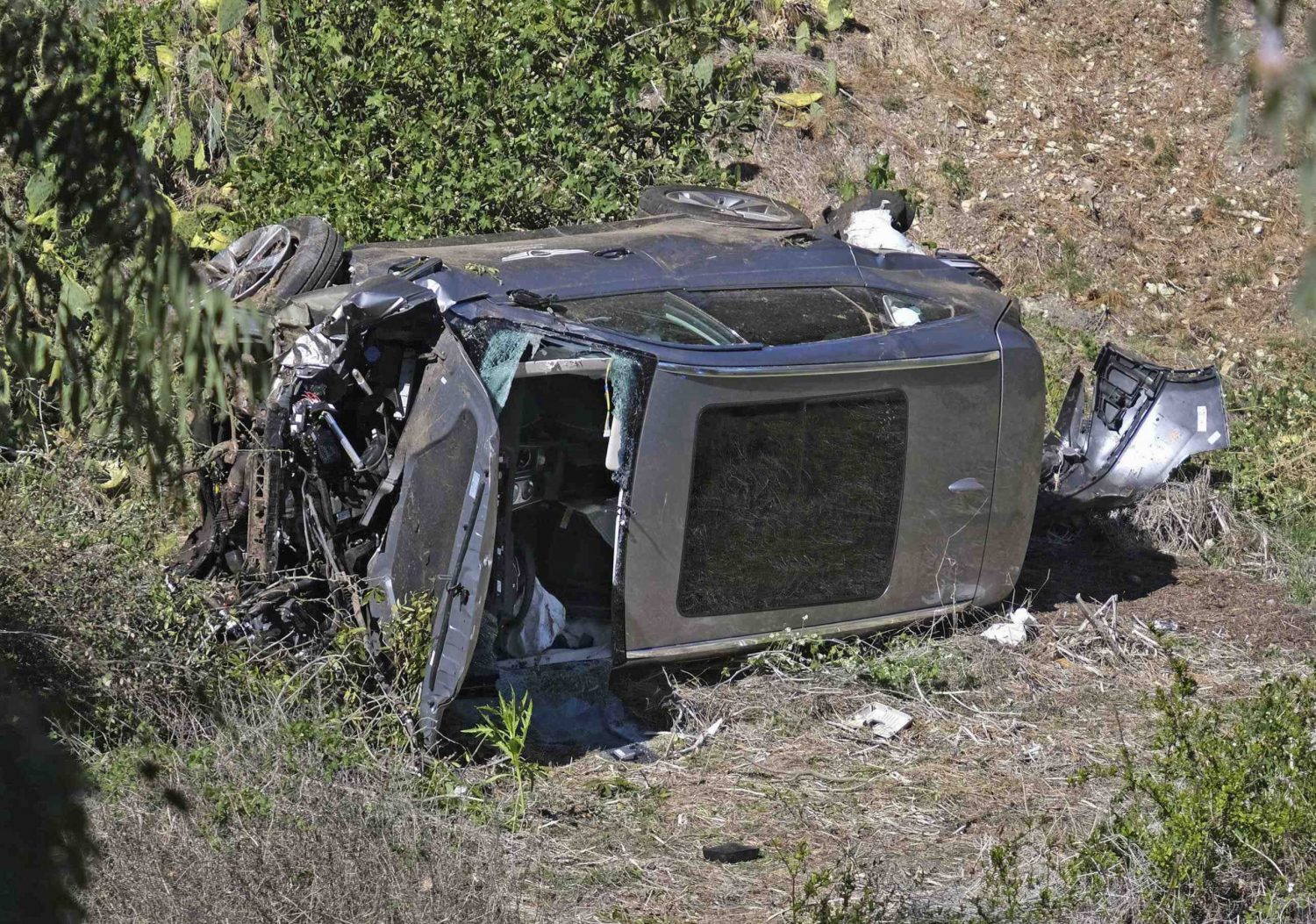 The world’s most famous golfer crashed his SUV, which flipped multiple times and landed on its side on a downhill road after initially crashing into a median. He had to be yanked from the 2021 Genesis GV80 midsize SUV through the windshield, which was smashed open by local firefighters, and was transported to a local hospital.

As a result of the impact of the crash at 7:12 a.m., the 82-time PGA Tour champion underwent surgery at Harbor-UCLA Medical Center to repair his right leg and ankle.

“Comminuted open fractures affecting both the upper and lower portions of the tibia and fibula bones were stabilized by inserting a rod into the tibia. Additional injuries to the bones of the foot and ankle [were] stabilized with a combination of screws and pins. Trauma to the muscle and soft tissue of the leg required surgical release of the covering of the muscles to relieve pressure due to swelling.”

Los Angeles County Sheriff Alex Villanueva told a news conference that “there was no evidence of impairment at the scene” of Woods’ accident, the PGA Tour website reported.

Woods tied Sam Snead’s all-time PGA wins record at the Zozo Championship in Inzai, Chiba Prefecture, on October 28, 2019. Tiger is No. 2 on the career majors wins list (15), with his most recent coming at the 2019 Masters. Jack Nicklaus won 18 majors.

For years, Woods has been in hot pursuit of Nicklaus’ all-time record, while significant time away from golf due to personal issues and physical ailments has raised questions about the likelihood of him surpassing the Golden Bear.

For now, his priority is recovery from his latest off-the-course setback.

“He’s currently awake, responsive, and recovering in his hospital room,” read a statement from Woods’ official Twitter account. “Thank you to the wonderful doctors and hospital staff at Harbor-UCLA Medical Center, the Los Angeles County Sheriff’s department and the Fire Department. Your support and assistance has been outstanding.

“There are no further updates at this time and we continue to thank you for your well-wishes and privacy for him and his family.”

Woods was wearing a seatbelt when he was found at the accident scene, according to a LA County Sheriff’s Deputy Carlos Gonzalez.

Tiger Had Back Surgery Weeks Ago

Before the accident and surgery this week, Woods’ immediate golf plans were put on hold after he underwent a microdiscectomy, his fifth back surgery, on December 23, 2020.

Three days before the surgery, Tiger finished teaming up with his 11-year-old-son Charlie at the PNC Championship in Florida. They finished in seventh place in the two-day event, carding 62s in both rounds. See video highlights here.

The 45-year-old Woods, who had expressed the desire to represent the United States on the links at the Tokyo Olympics, hosted The Genesis Invitational last weekend in nearby Pacific Palisades. His foundation runs the tournament.

Woods faced a tricky proposition to qualify for the Olympics, and as of last month, there wasn’t a clear path to qualifying, as outlined in this report.

Will he ever be able to play golf again? No one knows for sure right now.

The golf community, though, has rallied around Tiger.

“As if his body hasn’t endured enough,” world No. 2 Jon Rahm, who is playing in the WGC Workday Championship in Bradenton, Florida, was quoted as saying by The Associated Press. “I just hope he can get out of the hospital after recovery and he can still play with his kids and have a normal life.”

Like Rahm, other pro golfers reacted to Woods’ gruesome injuries while preparing for the same tournament.

“I’m sick to my stomach,” Justin Thomas, who is ranked No. 3, told The Associated Press. “It hurts to see one of my closest friends get in an accident. Man, I just hope he’s all right.”

In the road to recovery to return to pro golf, Woods faces what appears to be an uphill battle. But medical experts contacted by Reuters said it’s premature to conclude Tiger can’t make another comeback within the near future.

“What I have learned through my career taking care of athletes, particularly at that level ー don’t count them out,” said Dr. Victor Khabie, chief of surgery and co-director of the Orthopedics and Spine Institute, Northern Westchester Hospital, in Mt. Kisco, New York, told Reuters. “I would say a year.

“It probably takes about 12 weeks to four months for the bone to actually heal. And then after that intense rehab, realistically, probably a full year before he is back playing at a high level.”