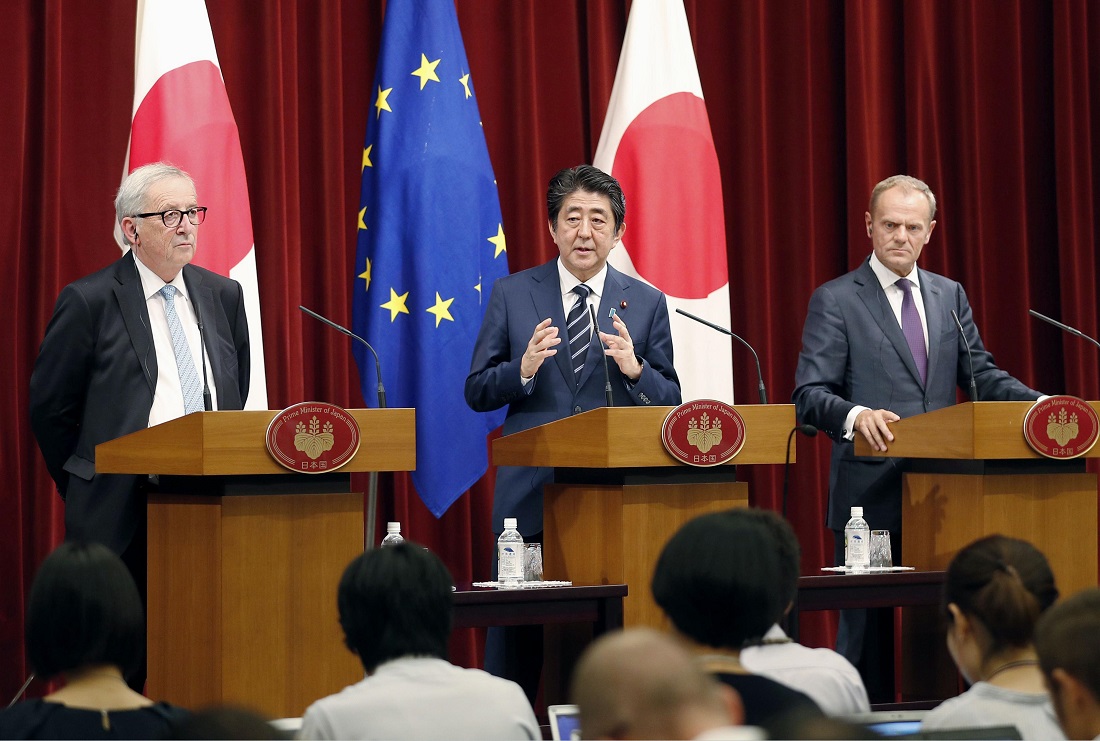 In his “New Year’s Reflection” on January 1, 2022, Prime Minister Fumio Kishida focused on two major issues: realization of “a new form of capitalism” to revive the Japanese economy, and advancement of “realism diplomacy for a new era”. This expert maneuvering of diplomacy and national security, which includes efforts to propagate universal values, navigate global challenges, and safeguard the lives and livelihoods of the Japanese people, will shape Japan’s economic diplomacy under Kishidanomics.

Japan has been strengthening economic diplomacy since Shinzo Abe came into power through his much-lauded Abenomics (launched in 2013). In 2016, the Abe government approved the Japan Revitalization Strategy 2016 (or “Growth Strategy”) to attract the “global flow of people, goods, and money into Japan” and turn the “virtuous economic cycle into sustainable economic growth.” Kishida’s “new capitalism” vision echoes the latter.

Based on the Growth Strategy, since 2016 Japan has undertaken economic diplomacy through the following three aspects:

Under this outlook, Japan gives prime importance to economic partnership agreements (EPAs) and free trade agreements (FTAs) because they help “capture the vitality of the growing market overseas and strengthen the basis of the Japanese economy”. In this context, its partnership with the European Union (EU) is gaining credence, particularly over shared interest in strengthening and reforming the multilateral trading system under the World Trade Organization (WTO) and rejecting protectionism.

The EU and Japan are strong economic partners not only due to their alignment over free trade values, but also the volume of trade between them.

In 2002, East Asia, North America, and Europe together accounted for 80 percent of Japan’s trade – a trend that has largely continued over time. Currently, Japan is the EU’s second-largest Asian trading partner after China, accounting for almost a quarter of global gross domestic product (GDP).

In 2001, the EU-Japan Action Plan, which laid out the framework for their political and economic linkages in the 21st Century, came to an end. Japan released an impact assessment report in 2012, which proposed entering into an FTA, as part of its free trade focus in economic diplomacy. Formal FTA negotiations began in 2013, and the EU-Japan Economic Partnership Agreement (EPA) was signed in 2018 (coming into effect in 2019).

This FTA created an open trade zone covering over 600 million people, and formed an integral part of Japan’s plan to use FTAs to achieve its economic fortification.

Initially, the trade ties between the two were characterized by big trade surpluses in favor of Japan. However, during 2009-2019, the trade became more balanced, as the EU’s trade in goods deficit with Japan decreased from €18 billion EUR ($20.5 billion USD) in 2009 to €2 billion EUR ($2.3 billion USD) in 2019. This relationship endured despite Japan’s trade barriers on EU firms.

Since the implementation of the EPA, trade has been expanding between the two sides. Within merely 10 months after the EPA was implemented, the EU’s exports to Japan went up by 6.6 percent and Japan’s to the EU by 6.3 percent, compared to the same period a year before.

From a geo-economic security lens, the EPA allowed the EU and Japan to shape worldwide exchange rules in line with their high standards and shared values of democracy and the rule of law, especially in light of an increasingly economically aggressive China. The EPA conveyed a strong message about rejection of protectionism by two of the world’s biggest economies.

Moreover, the EPA has allowed Japan to strengthen the multilateral trading system, which ranks as one of Tokyo’s biggest priorities. Its implementation has helped Tokyo strengthen its trade outlook with individual European states like France and Italy.

It has also enabled the application of shared standards, such as for sustainable development with a specific commitment toward the Paris Agreement on climate change. In a broader sense, Tokyo has advocated those agreements, such as the EU-Japan EPA, serve as building blocks to higher trade liberalization at the multilateral level because they include a commitment to institution-building in addition to free trade.

Thus, Japan has chosen to enhance economic dialogue using the Asia-Europe Meeting (ASEM), which has led to better mutual understanding between the two regions on various economic issues ー and better coordination on economic issues of mutual concern in international platforms such as the WTO.

How Does the EU-Japan EPA Complement the EU’s Indo-Pacific Strategy?

The Japan-EU FTA is certainly a critical variable in Indo-Pacific politics as a lynchpin of EU-Japan diplomacy that has a significant impact on regional players. At the time of signing, the EPA was termed “a light in the increasing darkness of international politics” – referring to China’s increased assertiveness, Donald Trump’s inward-looking trade policies, and the escalating trade war between China and the US. Former PM Abe notably called the signatories the “flag bearers of free trade”.

Therefore, as an agreement between like-minded powers, the Japan-EU EPA also complements both actors’ Indo-Pacific outlooks. Japan and the EU share an understanding that the Sino-United States conflict is damaging to both their interests. Their positions and interests converge not only via their EPA, but also in their strategic partnership and connectivity agreements, indicating their willingness to use economic diplomacy to counter China.

The EPA’s stand against regional protectionism, which led to strong concerns in China, built mutual grounds of economic synergy between Tokyo and Brussels. This was later reflected in the EU’s Indo-Pacific strategy (launched in 2021), which aimed to defend and strengthen the current rules-based order (threatened by China) by working with partners with aligned economic and security interests in the region.

The EU strategy will execute a number of actions, including resuming or completing trade and investment negotiations with India, New Zealand, Australia, Thailand, the Philippines, etc. and building “resilient” supply chains with these allies.

For example, the resumption of FTA talks between India and the EU in 2021 after an eight-year hiatus has given a new impetus to the Indo-Pacific balance. Given that the EU signed a connectivity partnership with India (just two years after the one with Japan), it is likely that the FTA with India may be realized in the near future.

Greater EU-Japan-India cooperation will be an important feature for enhancing the EU’s strategic presence in the Indo-Pacific. However, their trilateral relations in the Indo-Pacific are presently constrained by economic dependence on China, which makes them somewhat unwilling to provoke Beijing despite their security concerns. Nonetheless, the India-Japan-Australia-led Supply Chain Resilience Initiative (SCRI) is a potential avenue that could strengthen both Tokyo’s relationship with the EU and the EU’s integration into Asia.

The EU’s Indo-Pacific strategy particularly emphasizes increased outreach to regional bodies and mechanisms for enhanced cooperation in the region. Brussels’ growing focus means that furthering its economic interests in the region is not only essential, but also increasingly possible – particularly with its expanding dynamics with India, Japan, and Australia.

The EU-Japan EPA could aid the expansion of the SCRI to promote collaboration between these states and create a mutually beneficial trading environment. The SCRI would also allow Brussels to diversify supply chains away from China, which is a priority for the EU’s post-COVID-19 industrial plan.

The UK has also recognized the potential of the SCRI and free trade with Asian partners in its Global Britain agenda and could now, post-Brexit, also emerge as a strong partner.

In 2019, Japan signed an FTA with the United States (US-Japan Trade Agreement) too, which came into force in 2020. Japan’s FTAs with the US and the EU, together with the renewed trilateral partnership between them (November 2021) to address “challenges posed by the non-market policies and practices of third countries,” sends a strong signal to China against its unfair trade practices and coercive behavior.

This trilateral will only strengthen if the Japan-led Comprehensive and Progressive Agreement for Trans-Pacific Partnership (CPTPP) is expanded to include the European Union and the United States. Following China’s CPTPP bid (soon after the announcement of the Australia-US-UK – AUKUS – defense deal) there were renewed calls for both the EU and the US to join the pact, even though the US had pulled out in 2017.

The pact has also piqued the interest of countries like the United Kingdom and South Korea, ensuring immense potential for economic growth for all parties concerned.

Prime Minister Kishida’s pursuit of “economic sustainability by giving rise to a virtuous cycle of growth and distribution” will be incomplete without building Japan’s multilateral economic diplomacy with the European Union, India, Australia, and the United States. Japan’s EPA with the EU is an ideal first step in consolidating their partnership, and continued focus on strengthening bilateral economic and security ties will help both actors achieve their respective objectives and vision for the Indo-Pacific region.

Dr. Jagannath Panda is a Research Fellow and Center Coordinator for East Asia at the Manohar Parrikar Institute for Defense Studies and Analyses, New Delhi. Dr. Panda is the Series Editor for “Routledge Studies on Think Asia”.