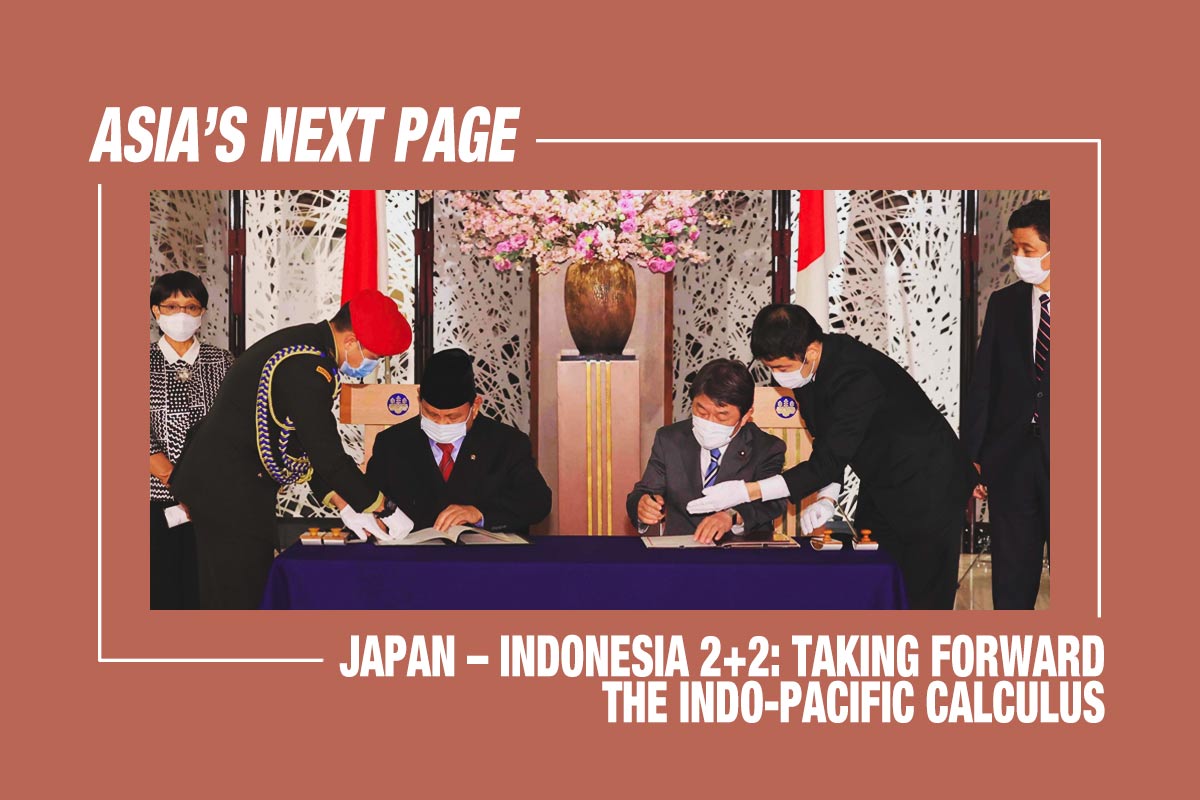 Southeast Asia has become pivotal to Tokyo’s Indo-Pacific outlook over the last few years, and Indonesia is clearly emerging as a preferred partner to this effect. While former Japanese Prime Minister Shinzo Abe did factor Indonesia as a key partner in his foreign policy, especially in the Expanded Partnership of Quality Infrastructure (EPQI) plan, Yoshihide Suga’s choice to visit Indonesia in his first trip abroad after becoming prime minister was a clear indication of the continued priority Tokyo prescribed to Indonesia.

Seen widely as a ‘continuity’ leader in Japan, Suga has sought to build on Abe’s free and open Indo-Pacific (FOIP) vision and ASEAN centrality. Bolstering ties with Indonesia comes as a part of this.

Indonesia’s geo-economic and geo-political positioning broadly compliments Japan’s Indo-Pacific strategy, giving both states the necessary impetus to inject a stronger security dimension in their bilateral partnership. The Japan-Indonesia Foreign and Defence Ministerial “2+2” meeting, held on March 30, 2021 against the background of growing flux in the Indo-Pacific, included a discussion of a range of economic and security issues, with particular emphasis on the Japan-Indonesia “Transfer of Defense Equipment and Technology” agreement.

What does such a “2+2″ meeting signify for the Japan-Indonesia partnership in a changing regional environment? What are its implications for the wider Indo-Pacific security calculus vis-a-vis China?

The Japan-Indonesia 2+2 meet had its genesis in 2015 under Abe. Now, under Prime Minister Suga, the dialogue has assumed new-found importance as one between strategic allies looking to synergize their security perspectives further by taking forward the structural framework of their security ties.

Amidst the domestic pressures that he faces ranging from the pandemic to a low-profile Olympics, Prime Minister Suga has appeared determined to take the 2+2 dialogue with Indonesia ahead. The intent to hold such a dialogue was primarily aimed at accelerating the export of Japanese defense equipment and technology to Indonesia and staying engaged with the vital Southeast Asian country that has been equally concerned with China’s maritime activities.

China’s maritime belligerence in Indo-Pacific, its new coast guard law, and imposing of the National Security Law in Hong Kong, form some of the reasons that make the Japan-Indonesia “2+2” significant. What is especially important about the recently concluded dialogue is the signing of an accord between Japan and Indonesia, which is quite similar to the Acquisition and Cross-Servicing Agreement (ACSA) that Japan shares with its Quadrilateral Security Dialogue (Quad) partners- the United States, India and Australia, as well as countries such as Britain, Italy, Malaysia, France, Germany and the Philippines.

The accord allows Japan to gain strategic confidence in a region where China’s assertiveness and technological prowess have been the highpoint of discussion. On a practical level, the accord serves a multitude of Japan’s diplomatic and security overtures, such as furthering Tokyo’s indigenous defense industrial ambitions. Besides, it enables Tokyo to gradually move away from its age-old post-war constitutional limits while boosting defense and security cooperation in the ASEAN region, which is seen as China’s backyard.

Not to overlook, Prime Minister Suga has termed collaboration with ASEAN —of which Indonesia is a pivotal member — as the “linchpin to the realization” of Japan’s FOIP. A reiteration of such a political perspective was again visible ahead of this recently concluded “2+2” meet, where Prime Minister Suga stated that Indonesia-Japan “specific cooperation” must be advanced to fulfill the FOIP vision and actualize a “foundation for further security cooperation”.

The “2+2” meet, and Japan-Indonesia defense equipment and technology deal, also come as critical advancements for Indonesia. Primary among them is Jakarta’s rising concern vis-a-vis its maritime security, and the threat that a rising and aggressive China poses to it.

Since its independence in 1945, Indonesia has adhered to a “free and active” foreign policy, which dictates its desire to play a dynamic and influential role in the region. This synergises well with Japan’s FOIP, and a growing partnership with Japan allows Jakarta to assume a regional leadership role in the Indo-Pacific.

The Indo-Pacific maritime domain, especially the South and East China Seas, are of vital economic, political and security importance for Indonesia. As a Southeast Asian leader with strong Indo-Pacific partnerships – such as with Japan – Indonesia can emerge as a pillar upholding the vision of an open, inclusive and free Indo-Pacific. This would also inevitably bolster the country’s geopolitical standing, commensurate to its massive size and geographical position.

Further, Japan and Indonesia share maritime disputes with China, which have been aggravated and tensed over the past year, making the security dimension of their relationship all the more crucial. Japan has been repeatedly been subject to the Chinese coast guard’s growing intrusions into Japanese territorial waters surrounding the disputed Senkaku Islands in the East China Sea – which China claims as its own.

On the other hand, Indonesia is faced with China’s increasing unlawful activities (like fishing) in its exclusive economic zone (EEZ), which lies in the waters surrounding the Natuna Islands. These Islands have long formed the focal point for skirmishes between China and Indonesia, and as China has sought to assert itself further in the past year, it has quickly re-emerged as a flashpoint.

Further, despite having no legitimate claim over what is explicitly Indonesian territory in the South China Sea (SCS), China has declared “joint development” plans for the region involving Indonesia. These have only made Jakarta more wary of Beijing’s underlying intentions and aware that any engagement in the same would be tantamount to acknowledging China’s stake in the maritime territory, and draw Indonesia into the SCS dispute further. Simultaneously, Beijing has refused any clarification over including Indonesia’s EEZ within its self-drawn “nine-dash” line.

Japan-Indonesia synergy has only been bolstered by the potential implications that China’s new coast guard law brings for both sides. The law will allow Chinese coast guard vessels to use force to stop foreign vessels from entering “Chinese waters”; it will also provide the coast guard forces the right to destroy foreign constructions under the pretext of shielding its sovereignty and security – essentially equipping it with extra-territorial powers.

Indonesia’s Maritime Security Agency is already anticipating a “spillover conflict” near the Natuna Islands as a result of the law. Synergy between Japan and Indonesia as maritime democracies is thus critical at this juncture. As Japanese Defense Minister Nobuo Kishi informed reporters after talks with Indonesian counterpart Prabowo Subianto, the two countries are together in their wish to oppose China’s unilateral attempts at changing the status-quo in the South and East China Sea.

Indonesia therefore presents important strategic opportunities for Japan. As middle powers, both states can collaborate to draw a stronger response to Chinese aggression, building on Japan’s identity as a “Proactive Contributor to Peace” – which forms a central aspect of Japan’s engagement with ASEAN states. Moreover, the two partners share membership in several regional organizations – like the ASEAN, East Asia Summit (EAS) and the ASEAN Defense Ministers Meeting-Plus (ADMM-Plus) – as highlighted in their 2015 2+2 joint statement. This gives them a multilateral regional connect that they can potentially use to strengthen their strategic position.

Indonesia and Japan have also long shared a “Strategic Partnership for Peaceful and Prosperous Future”; building on 60 years of political ties, the two foreign ministers furthered their regional leadership connect by agreeing to jointly work to resolve the Myanmar crisis. This adds a regional connotation to their partnership and cements their emerging synergy as critical economic powers, political agents and security providers in the Indo-Pacific.

Such synergy can be a force for making Southeast Asia more involved in gradually shaping regional mechanisms – like the Japan- India- Australia- led Supply Chain Resilience Initiative (SCRI). Aiming to form alternate global supply chains that detract from China’s global economic dominance and value chain centrality, the SCRI is expected to be crucially focused on ASEAN as a free trade bloc to actualize its goals. Indonesia can lead the ASEAN’s engagement with the SCRI. It can also be a value-added partner under the ‘Quad-Plus’ framework.

By pledging stronger security ties and showcasing the ability of the bilateral to staunchly look at issues such as Myanmar, Japan and Indonesia have projected the official beginning of what could be a defining partnership shaping the future of the South and East China Sea disputes —if not the broader Indo-Pacific.

Their relationship holds the potential to be a special regional partnership – like that of India and Japan. To realize such synergy, both sides must now expand focus to third-party cooperation, such as through a trilateral with India.

Dr. Jagannath Panda is a Research Fellow and Centre Coordinator for East Asia at the Manohar Parrikar Institute for Defence Studies and Analyses, New Delhi. Dr. Panda is Series Editor for “Routledge Studies on Think Asia”.  His articles for JAPAN Forward can be found here.