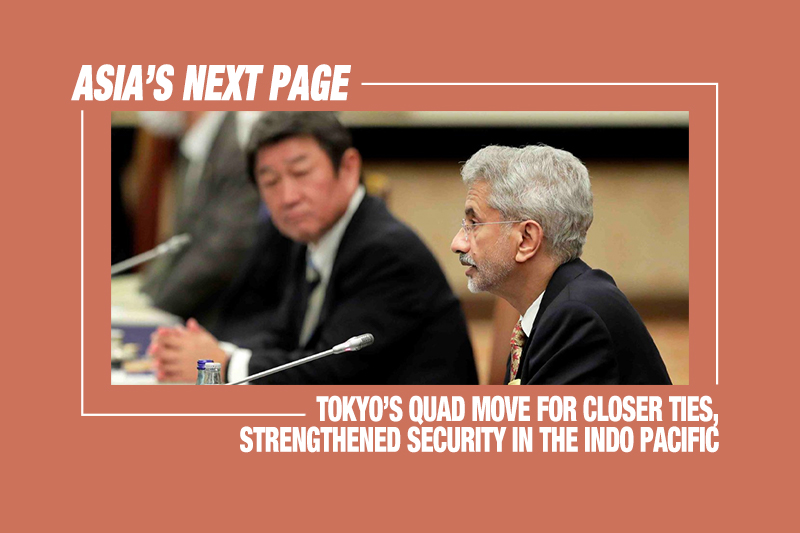 Militarization in Tokyo’s security outlook has been one of the most contested debates across Japan for last decade. Former Prime Minister Shinzo Abe’s ideas- reforming the postwar constitution, revising Article 9, having a stronger, active and responsive self-defense force for Japan, and a specific coalition in Indo-Pacific within the framework of the ‘Quad’- are key references to this effect.

Despite some unfulfilled goals before his untimely resignation from office this year, Abe resolutely succeeded in championing the Quad, his most cherished project in the Indo-Pacific since 2007. His accomplishment in revitalizing the Quad process, re-initiated as Quad 2.0, and promoting its expansion to a grander, global level beyond its Indo-Pacific focus by accepting the ‘Quad Plus’ mechanism led by the United States, stands unparalleled.

Will his successor Yoshihide Suga ensure such progress to actualize the ‘Quad Plus’ process that Abe initiated over the past year? 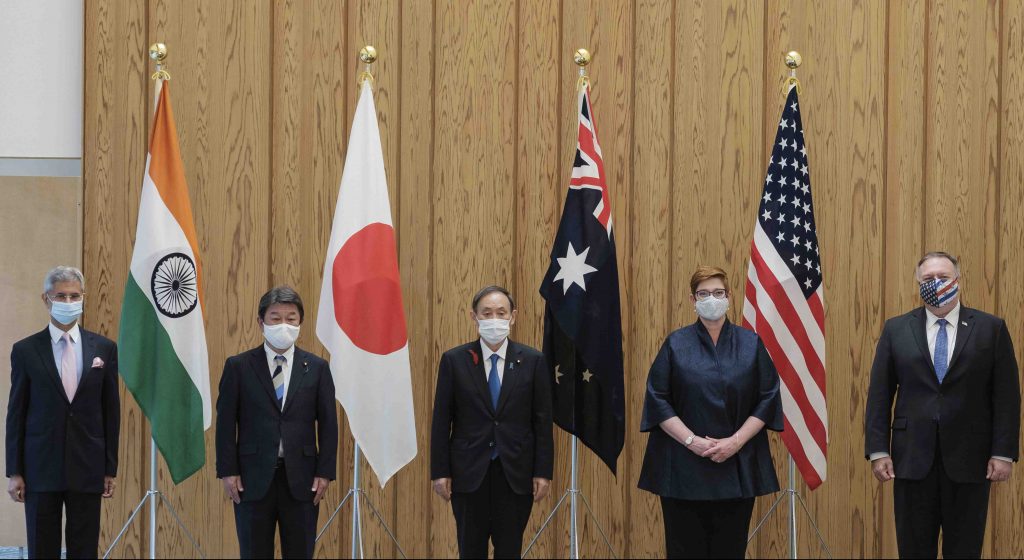 The Tokyo Quad meeting arrived when Suga was barely into his first month as prime minister of Japan, indicating his new but budding leadership stature. The first few telephonic calls between Suga and world leaders have followed a strenuous theme of boosting the Quad 2.0 narrative and promoting Japan’s ‘Free and Open Indo-Pacific’ (FOIP) vision.

For instance, in the first telephonic interaction between Indian Prime Minister Narendra Modi and Yoshihide Suga on September 25, Suga emphasized his plans to actively push forward multilateral efforts like Quad 2.0 with the U.S., Australia and India, to create a ‘free and open’ Indo-Pacific. In this regard, the much-awaited second ministerial Quad meeting between the U.S., Australia, India and Japan on October 6, 2020 was poised to be a major forum of dialogue amidst China’s rising adventurism and the COVID-19 pandemic.

Why was this meeting crucial for Japan and what did it reveal about Japan’s changing security outlook?

The recently-concluded Quad meeting in Tokyo indicates that Suga does hold the same interest in promoting the vision that his predecessor Shinzo Abe held. Yet, advancing such a vision requires Japan to pursue a long-drawn nationalist foreign policy, as well as a domestic consensus that Abe built despite inviting stronger opposition in the country.

The most telling sign of Suga’s deft diplomacy at work, and of his resolve to show a firm stand against China, is the change in the venue of the Quad 2020 meeting. Although the dialogue was initially set to be hosted by New Delhi, the shift of venue to Tokyo after Suga’s appointment is a clear indication of the new leader’s bold stance amidst a changing geopolitical order.

The move was, of course, aided by India’s dilemma over holding a meeting that China has dubbed exclusively ‘anti-China’ and a ‘mini NATO’ exercise. Beijing’s displeasure had been conveyed, even as both neighboring countries have been amidst an almost four-month long military stand-off at the Line of Actual Control (LAC) along their shared border, with hardly any signs of tensions calming.

Nevertheless, the fact that the meeting was hosted in-person in Tokyo ー at a time when the pandemic has necessitated virtual dialogues ーdemonstrates the weight it is accorded in Suga’s security outlook for the country. Held within the first month of Suga’s leadership, the Quad meeting is a clear assertion of Japan’s priorities, its commitment to Abe’s FOIP legacy and Suga’s own efforts to forge an international political personalistic presence.

As a Custodian of Rules-based Order

Abe’s focus was not limited to the Quad, but incorporated a larger (and thorough) strategy of economic multilateralism, and a deep-seated commitment to creating a free, open and equal trading environment for the region. This strategy translated into a number of regional initiatives including the Expanded Partnership for Quality Infrastructure (EPQI), Tokyo-led Comprehensive and Progressive Agreement for Trans-Pacific Partnership (CPTPP) and even the Regional Comprehensive Economic Partnership (RCEP).

Now, post-Abe, Suga’s focus will be on sustaining Abe’s ‘go big or go home’ narrative. In this context, the recent Quad meeting not only defined a coordinated approach, but also set the future course of action for the grouping.

With an increasingly revisionist China being an acute concern for Japan (and indeed, all the other Quad members), the grouping’s foremost aim will be to devise a way of confronting Beijing over its adventuristic moves and, in the long term, create a united coalition of “like-minded” democracies against Beijing.

At the same time, Japan under Suga will also seek to promote a parallel focus on emerging as a custodial guardian of the rules-based order in the Indo-Pacific and broader Asia. In this sense, Suga is likely to work on advancing the Quad narrative into a Quad Plus platform (with South Korea, Vietnam, New Zealand, Brazil and Israel being addendums). An expanded framework of this nature will be crucial for deepening Tokyo’s security outlook, while at the same time paving the way for deeper integration of Japan’s co-founded initiatives, like Blue Dot Network (BDN) and Supply Chain Resilience Initiative (SCRI).

The recent Quad meeting takes on new significance considering the exceedingly crucial and the politically charged time that it takes place.

India-China ties are rapidly deteriorating with a standstill in bilateral dialogue mechanisms. The U.S. presidential election is around the corner, and in the event of a change in the White House, the extent to which Washington will push for a decoupling strategy remains to be seen. Australia’s ties with China are an “all-time low,” with both countries essentially entering into a trade and diplomatic spat after Canberra supported U.S. calls for an independent investigation into the origins of COVID-19, which first emerged in China.

Tokyo, too, has seen a quickly dwindling relationship with China over a re-emergence of tensions in the East China Sea and Tokyo’s criticism of the new Hong Kong security legislation. Beijing’s aggressive behavior with Taiwan. China’s ‘wolf-warrior’ diplomacy has further weakened the authoritarian state’s global image and compounded its already strained relations with key regional and global powers.

Here, Quad 2.0 is a vital platform for coming together over shared anti-China sentiments, even if not explicitly expressed by countries like India and Japan.

The Japanese Defense Ministry’s proposal of over ¥5.4 trillion for fiscal year 2021 demonstrates Suga’s resolve to persist with Japan’s militarization efforts domestically and regionally. Kishi has strong Taiwan ties and has previously suggested arming Japan with nuclear weapons in light of the evolving security environment. His statement that China’s “rapid military build-up” is a major concern, coming after his appointment in Suga’s cabinet, reiterates the importance of mechanisms like Quad to Suga’s cabinet.

Much like Abe, Suga realizes the significance of Japan’s changing security environment and national interest challenges, and is prepared to build modernized warfare tools to protect its borders.

Abe’s aspirations of reinvigorating Japan’s national security and defense calculus by reforming its never-amended post-war constitution is a legacy unfinished. The Quad 2.0 is a part of this legacy, encompassing Japan’s move towards ‘proactive pacifism’ as highlighted in Abe’s 2013 “Japan is Back” speech.

Abe’s vision has found a place in Suga’s outlook as well, with the new prime minister continuing Abe’s emphasis on making Japan a “rules promoter, a commons’ guardian, and an effective ally”. Quad 2.0 allows for the realization of Abe’s “collective self-defense” dream, vital amidst changing security structures driven by China’s military-maritime overtures.

Nonetheless, Suga faces considerable domestic challenges, especially considering he may be Prime Minister only until general elections in 2021.

Japan’s ruling Liberal Democratic Party (LDP), amidst a falling economy, pandemic induced health crises and a rise in nationalist outlooks, is keen on securing a populist vote bank to ensure continued power. With Suga having been at the forefront of demands to diversify supply chains, reduce China dependency and focus on economic nationalism, ‘Suganomics’ is set to follow in the broad footsteps of ‘Abenomics’. The SCRI and Japan’s manufacturing exodus from China are moves towards sustaining economic multilateralism with nuanced inclusions of nationalist incentives.

The Quad meeting thus witnessed fine-balancing by Japan over security issues due to entwined economic interests with ChinaーSuga’s first major diplomatic test will challenge his foreign policy skills apropos the Indo-Pacific, where mediation and strategic tact have become vital to ensuring peace. In parallel, Suga will need to reassure his own government, and LDP, of not going too far in confronting China, as LDP Secretary General Toshihiro Nikai has China-friendly dealings.

Concurrently, Suga will need to balance demands for a stronger anti-China stance by LDP’s China hawks, which have re-emerged amid recent Chinese adventurism, and even extended to calls for cancelling the currently postponed state visit by the Chinese President Xi Jinping.

China had already criticized the Tokyo Quad meeting, calling the grouping an “exclusive clique” that is “targeting a third party or harming third party’s interests”. With the current geopolitical climate full of strife and an evolving post-COVID order in the making, the time is ripe for Quad to emerge as an active political coalition, leaving behind its abstract ideas.

Although India, with its restrained foreign policy unaccepting of alliances, was attributed as the weakest link of the Quad 2.0, New Delhi’s post-Galwan foreign policy has shown active overtures towards pointed alignment and deeper engagement with conjectural alliances like the Quad. The Quad 2.0 thus has an opening to emerge as a driving structure of Indo-Pacific security and politics, rather than being limited to ideas and aspirations.

Japan, with a new leadership, has taken advantage of this opportunity as host to not only fulfil the legacy of Abe’s Quad ambitions, but also to build stronger bilateral ties with its Quad partners. Now it has an opportunity to assuredly shape its Quad chapter.