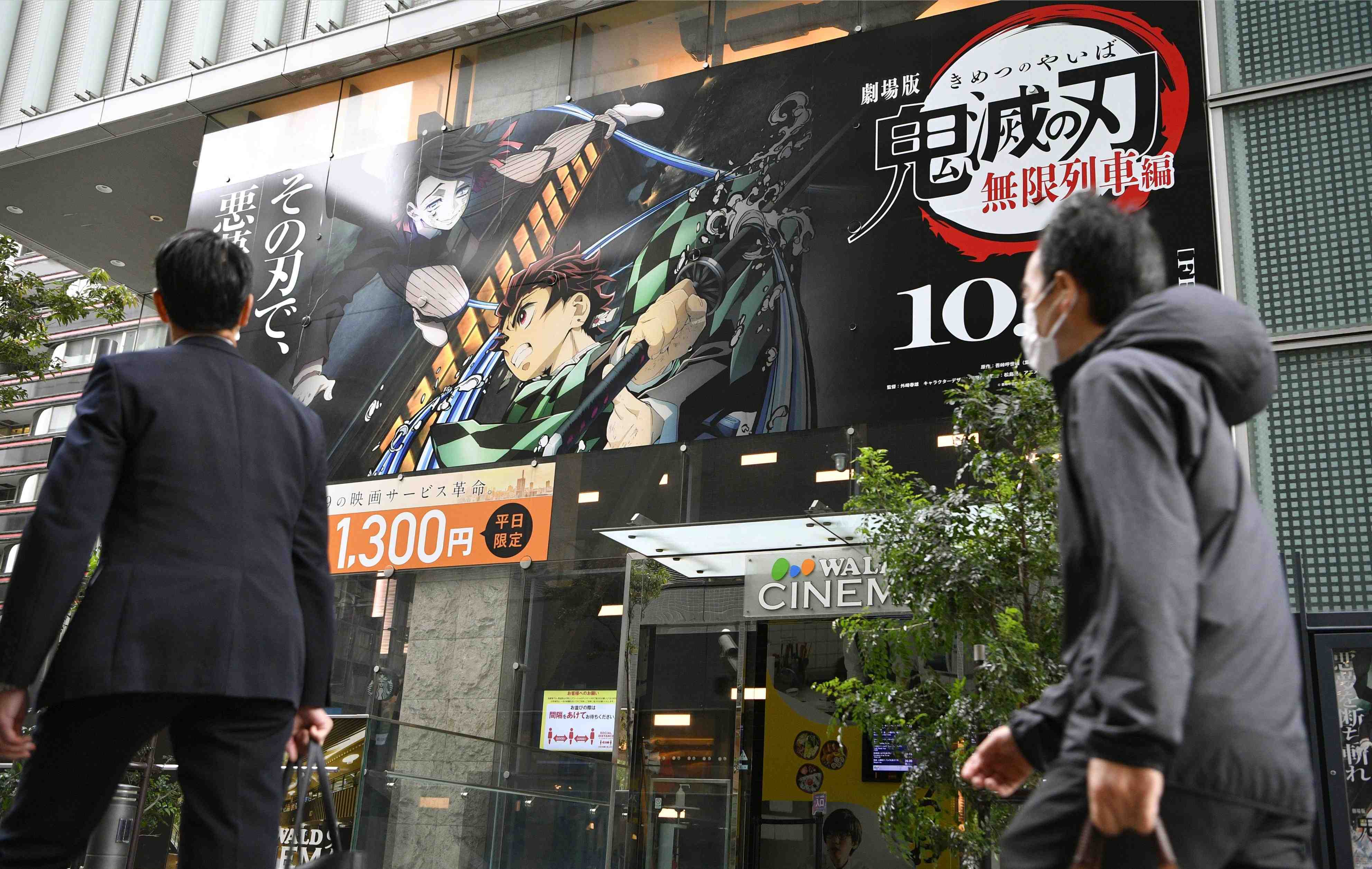 On October 16, the immensely popular anime series, Kimetsu no Yaiba: Demon Slayer, premiered its first film of the series, Mugen Ressha (Infinity Train), exclusively in Japan. And fans are already having a field day.

COVID-19? This Movie’s Already a Blockbuster 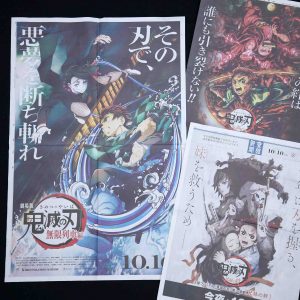 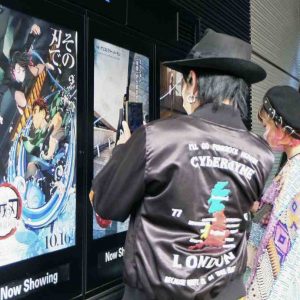 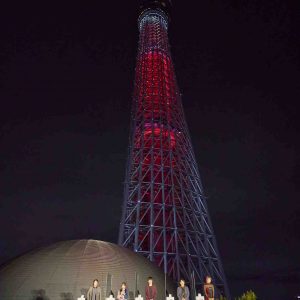 Mugen Ressha is the direct sequel of the first season Kimetsu no Yaiba: Demon Slayer released as an anime series in 2019.

The anticipation had been rising for weeks, with the promotion of themed goods in several shops and convenience stores, and Tokyo Skytree turning red on the day of the premiere in honor of the film.

To raise the anticipation among fans, Fuji Television broadcast several of the episodes of the series on October 10 and October 17. It was the first showing of the anime on a major television network in Japan. Previously, the anime had only had luck with smaller local Tokyo channels.

When ticket sales started online on October 13, netizens took to Twitter to complain that websites such as TOHO, Aeon were crashing, and they had to wait several hours to book a seat.

And on its first day, the fans were definitely ready for the release. The film roadshow opened nationwide on Friday, October 16, as early as 7 A.M. in some places.

One excited fan that spoke to Kyodo news on the opening day reported getting up at 5 A.M. to see the first show at 7 A.M. showing at TOHO Cinema in Kabukicho, Shinjuku explaining, “I wanted to see the continuation of the story, so I woke up early!”

To meet the demand some cinemas have also expanded seating capacity, compared to the past few weeks. Cinemas have been allowed to operate full capacity since September 19, on condition that bringing food in the venue is still banned, and everyone entering disinfects their hands and wears a mask. To err on the side of caution, however, many cinemas have been operating at half capacity to reassure customers.

We visited the TOHO Cinemas Shinjuku in the Tokyo ward’s Kabukicho neighborhood on the evening of October 16. The movie theaters in this complex had been operating at half capacity since September 19. However, they will be operating at full capacity for three weeks starting October 16, timed exactly for the new Kimetsu no Yaiba movie.

On October 16, showings started at 6 A.M.. The theater has turned over 11 out of the total 12 theaters in the complex to screening this movie, for a total of 42 showings a day.

Despite the immense number of showings, it was still a last minute scramble to get tickets on the day online. The 9 P.M. show was chock-a-block full. Entry was only allowed to those who had pre-bought a ticket, avoiding queueing upon entry, but lines of people formed upon exiting the venue. There was a crowd at the souvenir shop on the third floor of the building, with at least 40 people standing in line.

From the reactions we encountered, reception was positive on the first day. Two ladies in their 30s who spoke to JAPAN Forward after the film liked it. One of them said: “It was really good, I was so moved. Although I already knew the story from the manga, the fighting scene was really cool.”

On the way out, a man in his 20s queuing in line for the souvenir shop commented excitedly to his friend “I swear I cried for an hour straight.”

Online reactions were just as heartfelt, with one netizen saying the day after the opening: “I couldn’t stop crying..everyone go see it!” Another recommended, “Don’t forget your handkerchief!”

Be it due to the anticipation created by the promotions or the movie’s good reception on its own, shows were sold out in Osaka and several locations in Tokyo, even as the film was taking over most of the screens in the cinemas.

This is a welcome development in a sector which has been suffering in the time of COVID-19, with many major releases such as the latest James Bond movie, No Time to Die being postponed. Entire film festivals like Sundance,Cannes or Venice were either cancelled, reduced in size or took place online. The Japanese firm TOHO, which distributes films and operates cinemas around the country, reported a 78 percent loss in profits in the quarter between March and September 2020, according to a report by the Asahi Shimbun. The hope is that this movie will bring some financial relief to the sector.

An Anime for all Ages

What was most surprising on the day of the opening of the film was seeing the wide audience that the anime caters to. There were high school students, men, women, mothers and daughters, couples, a surprisingly high number of women, something unusual for a Shonen anime. The anime is also hugely popular among children.

This is a testament of the appeal of Kimetsu no Yaiba and its audience. The story follows a young man, Tanjiro Kamado, who loses his family to demons. Everyone is killed, except his one sister Nezuko, who is turned into a demon. In order to return her to human form, Tanjiro becomes a Demon Slayer, a corps category protecting humans from their demon counterparts.

Like many Shonen stories, it successfully combines the emotional and the light hearted in a combo that tiptoes between the ridiculous and endearing. However, it’s also set in the Taisho Era (1912-1926) and has this nostalgic Japanese feel to it.

The story revolves around the control of natural elements, like water and fire, and draws from that imagery by being beautifully illustrated with bold colors. From a content point of view, it contains very pure characters that children can aspire to, like Tanjiro himself. At the same time, it manages to have a nuanced development that appeals to a wide range of ages.

In that sense, Mugen Resha has all the right points to appeal to its core audience. It focuses on the specific episode of the Infinity Train, where Tanjiro, Nezuko and his friends Zenitusu and Inosuke are sent to investigate a case of a train, then join one of the top Demon Slayers, Kyojoru Rengoku. (You’ll have to see the movie to learn more.)

Successful Transition from Manga to Anime

The story is born from the manga written by Koyoharu Gotōge, published on Shonen Jump between February 2016 and May 2020.

With just 19 episodes, it is a relatively short series compared to other popular manga. Nonetheless, it was flying off the shelves from the beginning and it has managed to sell more than 40 million copies all around the world.

According to Oricon, it was the most-sold manga in Japan in 2019, with 12 million copies sold, stealing the number one place from the historical series One Piece for the first time in 12 years.

The manga, thanks to a production collaboration with Ufotable was also made into an anime. For now, there has been only one anime series released with 26 episodes, and it has been consistently among the top viewed anime on Netflix in Japan in 2020.