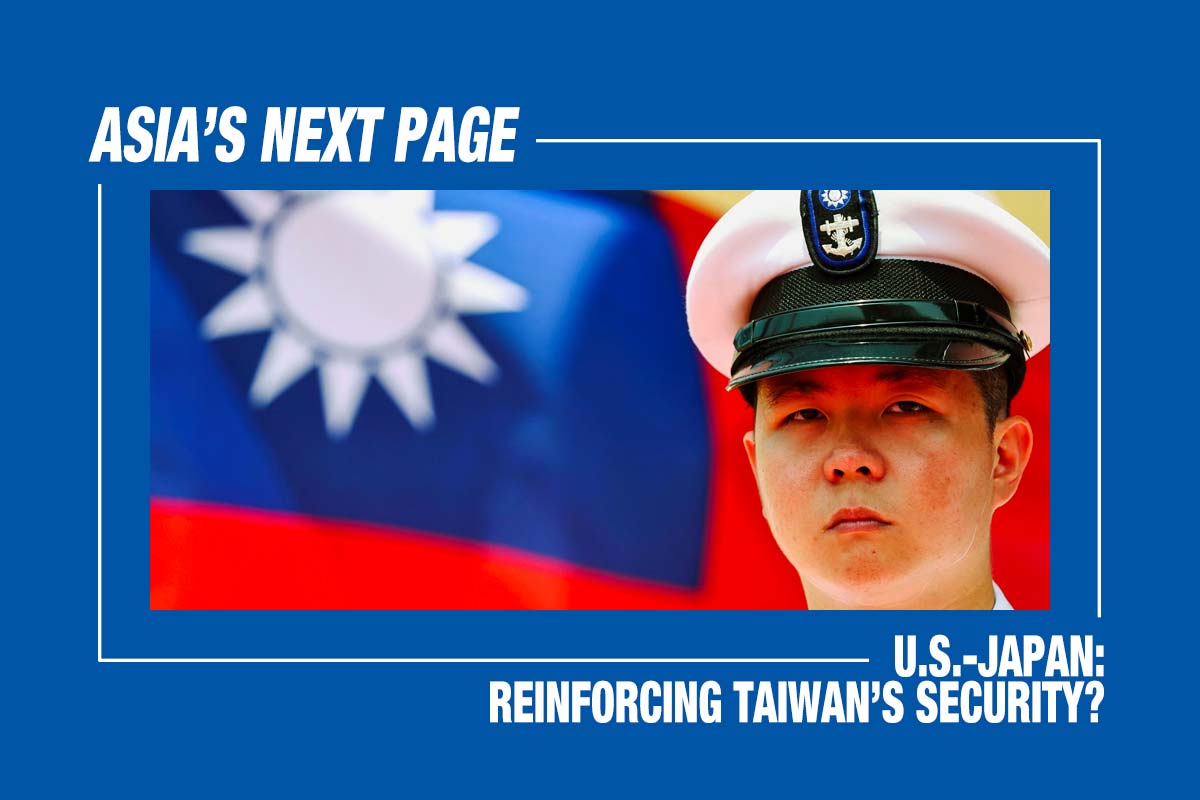 Under U.S. President Joe Biden’s push to strengthen U.S. treaty alliances and restore American leadership on the global stage, the Tokyo-Washington partnership is gradually regaining momentum. This renewed commitment to its allies is evident in the Biden administration’s proactive outreach to its security partners in the Indo-Pacific — and a focus on Taiwan is becoming increasingly evident in this outlook.

In April 2021, Japanese Prime Minister Yoshihide Suga visited Washington in what marked the first state visit by a foreign leader under Biden’s presidency. The Taiwan Strait issue featured prominently in their discussions.

In reinvigorating a “global partnership for a new era”, the U.S. and Japan sought to establish a more action-oriented partnership capable of promoting their Indo-Pacific vision and balancing China’s rise. They emphasised the importance of maintaining “peace and stability across the Taiwan Strait” and encouraging a conflict-free resolution to the Cross-Strait dispute.

In a symbol of Taiwan’s growing importance within the U.S.-Japan bilateral, Biden and Suga further underscored Taiwan in their discussions on the sidelines of the recent G7 summit as well. Furthermore, the American and Japanese delegations to the G7 actively pushed to include the situation in the Taiwan Strait in the G7’s agenda, culminating in “unprecedented support” in the leaders’ communique.

Where does Taiwan figure in the evolving U.S.-Japan ties, and what is the strategic intent behind stressing Taiwan’s importance in their statements?

In recent months, Taiwan has been subject to increasing Chinese adventurism — particularly in the form of “gray zone” warfare tactics, including frequent aircraft forays, maritime exercises and patrols, cyber-attacks and diplomatic isolation. Taiwanese administered Matsu archipelago, in the middle of the Cross-Strait zone, is becoming the prime Chinese target.

In the South China Sea (SCS), the Philippines has accused China of moving toward occupying more “features” near the contested Spratly Islands. Such irregular encroachment moves followed China’s oppressive actions in Hong Kong, making them a part of Beijing’s shift in posture to an even more belligerent one.

Amidst this, Chinese President Xi Jinping has made Beijing’s stand steadfastly clear: the unification of Taiwan with mainland China is inevitable, and if the situation escalates, the use of force to achieve the same should not be ruled out.

Hence, there is now a real concern that China is moving away from merely “theoretical talk” about enforcing unification with Taiwan to actually contemplating and planning military action. In this context, the Taiwanese Foreign Affairs Ministry welcomed the U.S.-Japan statement underscoring Cross-Strait stability and the importance of devising a peaceful resolution.

The growing Cross-Strait tensions have made Taiwan a priority external affairs issue for both the U.S. and Japan. With both Washington and Tokyo managing an intensifying competition with Beijing, particularly in the Indo-Pacific region, Taiwan is gaining attention as a strategically crucial regional flashpoint.

The issue has become one with grave implications for the national security interests of Japan and the U.S. For Tokyo, Cross-Strait insecurity holds implications for China’s military activities in the East China Sea and South China Sea. It would likely result in a much more expansionist China and shift the regional balance of power further in Beijing’s favor, posing a serious security threat to Japan. China would dominate the East Asian and Western Pacific region, destabilizing the strategic equation of power in the region. To this end, Taiwan is now included in Tokyo’s defense report as a priority security consideration.

For the U.S., Taiwan is important as a regional democratic partner and a way to resist Chinese communism. Beijing’s forceful unification with Taiwan would cement U.S. decline, critically damaging America’s global standing.

Therefore, as the threat of a Chinese assault on Taiwan becomes an increasing possibility — evidenced by aggressive frequent Chinese aerial exercises on the edge of Taiwan’s air defense identification zone in recent months — it is important to understand the level of the U.S. and Japan’s  commitment to Taiwan.

Under the 1979 Congressional Taiwan Relations Act, the U.S. has committed to providing Taiwan with “arms of a defensive character” against aggression. On Japan’s part, ties with Taiwan have remained quasi-diplomatic and centered on economic engagement.

Japanese officials were quick to clarify that the Suga-Biden statement does not presuppose military aid from Tokyo to Taipei. However, considering the U.S.-Japan security alliance that commits them to act against mutual threats, Japan could provide logistical support to U.S. forces should it come to Taiwan’s defense. The U.S. and Japan reaffirmed that Article V of their Security Treaty applied to the East China Sea ー Senkaku Islands dispute, and support to Taiwan could potentially fall under such a clause or scenario.

Nonetheless, the extent to which the U.S.-Japan alliance will realistically support Taiwan against China remains to be seen. Although the U.S. is a major defense supplier to Taipei, it currently seems unlikely that Washington will engage in formal military action upon a forceful occupation of Taiwan.

Public opinion in the U.S. has become increasingly against military involvement in foreign conflicts, and this will greatly shape American foreign policy in the coming times. For instance, even with Crimean annexation, U.S. response was limited to sanctions and rebuke on the international stage. Such a scenario is likely to materialize with Taiwan as well.

In this context, the creation of a regional collective defense mechanism (somewhat close to the idea of an ‘Asian NATO’) could act as a potential mechanism to coordinate a multilateral response to a Chinese assault against Taiwan. Collective security, rather than individual aid, could not only sway public opinion in the U.S. and its democratic Indo-Pacific partners — especially the Quad countries — but also perhaps deter China against forceful action.

Additionally, the geopolitical context in which the Taiwan issue is situated could also force Washington to support Taiwan against a forceful Chinese unification attempt. If China successfully achieves unification, which remains the main goal of the Chinese Communist Party (CCP), it would cause a paradigm political and strategic shift in Asia, particularly in terms of how U.S. power is perceived.

How the U.S. responds to a direct attack on Taiwan will be testament to how it treats its democratic allies and friends. Failure to prevent Taiwan’s occupation would cause allies like Japan and South Korea to reevaluate the value of a security alliance with Washington. Countries like India would also view defense partnerships with the U.S. differently.

So far, Beijing has carefully navigated the Taiwan question — like by ensuring it engages only in activities that fall short of war — so as to avoid a direct confrontation ahead of the CCP centennial celebrations this year. To minimize tensions as the 100th anniversary draws close, Beijing sharply reduced (perhaps temporarily) Chinese military flybys near Taiwan after the U.S.-Japan leaders’ statement in April.

Moreover, Xi’s suppressive actions in Hong Kong were also carefully calibrated to ensure they did not instigate a massive revolt among Taiwan’s pro-independence activists. In fact, they only caused a ripple effect, most evident in President Tsai-Ing-wen’s re-election in January 2020, which was massively influenced by China’s 2019 crackdown on Hong Kong protesters.

Preventing escalation of tensions and reaching a peaceful resolution to the Cross-Strait dispute are in favor of both the U.S. and Japan. Much of Japan’s strategy to play a greater security role in the U.S.-Japan alliance is drawn on the objective of averting a potential conflict. Nevertheless, such a scenario looks bleak. As Japan becomes more vocal on the Taiwan issue, it is likely to draw further ire from China, leading to rising tensions. In a recent National Diet speech, Suga referred to Taiwan as a country, drawing China’s anger and leading to an official clarification that Tokyo’s position on Taiwan remains unchanged.

Taiwan’s diplomatic victory at the recently-concluded G7 due to a U.S.-Japan push, its bid for prospective inclusion in the Comprehensive and Progressive Agreement for Trans-Pacific Partnership (CPTPP) with Japan’s support, and signing of an MoU to move medical supply chains away from China are developments that could stress ties further.

Collectively, these diplomatic maneuvers point to Taipei’s efforts to cement its position in the emerging post-pandemic international order —a goal that the U.S. and Japan can further. And while this could provoke a strong reaction from Beijing, such moves come as vitally necessary to embed Taiwan in the region as a precursor to garnering international support, and thus deterring Chinese adventurism.

Therefore, Taiwan’s role in the U.S.-Japan alliance is balanced delicately between diplomatic strategy, geopolitical realities and actionable resolve. The focus on Taiwan within the U.S.-Japan bilateral points to an emerging triangularity between the three partners directed at maintaining Cross-Strait peace and stability.

Nevertheless, key gaps continue in the U.S. and Japan’s positions. While Biden seems to be moving away from the long-held U.S. policy of ‘strategic ambiguity’ vis-a-vis Taiwan, Tokyo’s position remains more cautious as it attempts to avoid appearing “anti-China”.

Whether Japan’s efforts to strike this rather delicate balance will be successful remains to be seen. Should China’s belligerent naval and air tactics increase, U.S.-Taiwan-Japan will be forced to plan for the event of Taiwan’s occupation by China —forcing Tokyo to perhaps abandon such a strategy.

Dr. Jagannath Panda is a Research Fellow and Centre Coordinator for East Asia at the Manohar Parrikar Institute for Defence Studies and Analyses, New Delhi. Dr. Panda is the Series Editor for “Routledge Studies on Think Asia”.  Find his writing on JAPAN Forward at this link.