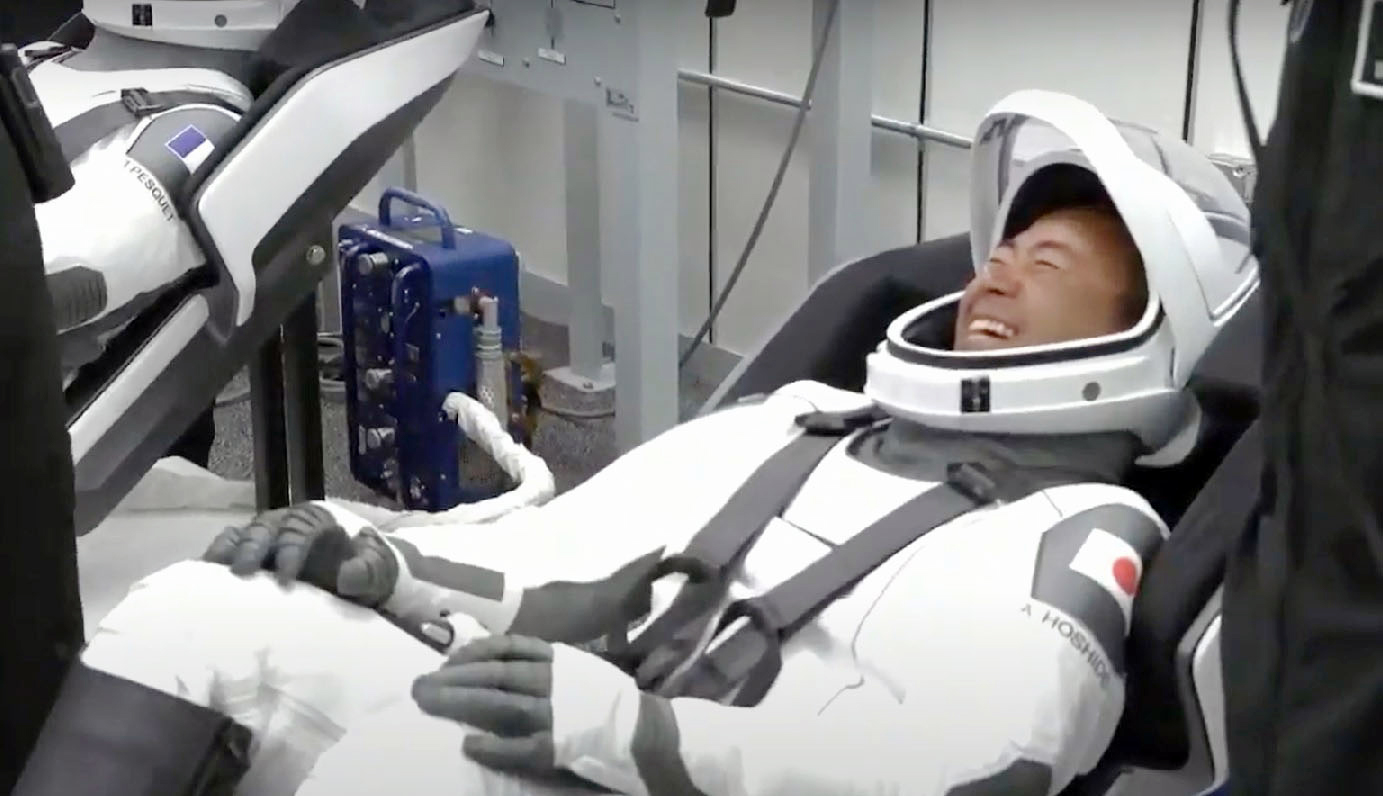 Japanese astronaut Akihiko Hoshide takes off to the International Space Station on SpaceX.

Astronaut Akihiko Hoshide (52), who returned to Earth on November 9, researched how humans can live in space using the Japanese Experiment Module "Kibo" on the International Space Station (ISS).

Humans currently face many obstacles to living as comfortably and healthily in space as they do on Earth. However, with Mr. Hoshide's experiments as the foundation, research for the future is accelerating.

The Muscles that Hold Us Up

In May of this year, Mr. Hoshide posted this to his Twitter account from space, uploading an image of running with special exercise equipment on the ISS.

On Earth where there’s gravity, muscles and bones support the body and maintain posture. However, in the low-gravity environment of space, this isn't necessary. In addition to muscle mass, the calcium in bones is lost, and bone mass decreases rapidly. This leads to adverse health effects such as muscle atrophy, osteoporosis, and weakening organs. To fight this, astronauts aboard the ISS must exercise for about two hours every day.

Is it possible to prevent muscle atrophy with diet instead of exercise?

An experiment using edible natural biomaterials is being conducted with these expectations in mind. Soybean-derived peptides and the like have been added to rat-derived muscle cells, launched to the ISS, and cultured onboard the spaceship. Then they are being brought back to Earth to determine their effectiveness against muscle atrophy. If their efficacy is confirmed, it can lead to the development of medicines or new foods for space.

Additionally, the experiments attempted to clarify the influence of gravity in the microscopic world of cells. Scientists now know that cells change their shape and function in space. There is some concern that when the gravity that impacts each and every cell disappears, our health will be affected.

In Hoshide’s experiment, mammal muscle cells were cultured for several days under 1G artificial gravity (the level of gravity on Earth) and the low-gravity environment of space. An optical microscope inside the Kibo module observed the shapes of relatively heavy organelles, such as the nuclei and mitochondria inside cells, and changes in the movement of fibers that attach to the muscles of the cells.

The experiment in space is planned in three parts. Professor of ​​Mechanobiology Masahiro Sokabe of Nagoya University, who leads the research, said, "If the mechanism by which cells sense gravity can be elucidated, the impact on biology and medicine will be great. It will lead to the development of not only mechanisms that allow cells to feel gravity even in space, but also a cure for symptoms caused by being bedridden."

What About Giving Birth in Space?

The fundamental theme of "Can mammals breed in space?" was also the subject of the experiment. If humans are to live in space for extended periods, it is a vital question to answer. Still, experiments haven't been conducted yet because handling fertilized eggs is difficult. Experimental animals such as mice are sensitive to environmental changes, making long-term breeding in space challenging.

This time, instruments have been developed that can be easily handled, even by astronauts unfamiliar with fertilized-egg experiments. Mice eggs fertilized two days earlier were brought to the ISS and cultured for four days separately under the microgravity and artificial gravity of the universe. They are being returned to Earth to investigate the speed of development, genetic expression, the development of "blastocysts" that are the source of life, and whether cellular differentiation occurs correctly.

Research on Earth led by professor Teruhiko Wakayama, in the field of developmental engineering at the University of Yamanashi, imitated the low gravity of space. The outcome showed that the development of fertilized eggs worsened and the birth rate decreased significantly.

Professor Wakayama said, "Gravity may be involved in the development of fertilized mammalian eggs, and I would like to confirm that,” concluded Professor Wakayama. If egg development can occur normally in space, it can provide a basis for human beings to thrive in that environment, just like in science fiction movies and anime. "Even if they do not grow normally, it can provide great hints for research in basic biology and fertility treatments,” he added.


Towards Food Self-sufficiency on the Moon

Currently, food in space comes solely from Earth, and the development of new procurement methods for it is also an issue.

The United States, Europe, Japan, and others are planning to build a lunar orbital base to conduct manned exploration of the Moon and Mars and start full-scale sustainable lunar activity after the late 2020s. They are expecting that in 2040, a thousand people will be living on the Moon, and 10,000 people will visit each year.

The Japan Aerospace Exploration Agency (JAXA) plans to set up a farm on the Moon to produce food and is conducting a demonstrative experiment to grow crops inside a bag. Lettuce seeds and nutrient powder were put in a pouch and launched to the ISS. Once there, they were watered and cultivated in a dedicated device. Reports on the experiment say that the main leaves sprouted 15 days later, and they were able to be harvested 50 days later.

The experiment was collaboratively developed with Takenaka Corporation and Kirin Holdings. Already, basil and chili peppers have been cultivated on the ISS, but this is the first time crops were grown inside bags. The bags are an airtight environment, so this method has the advantages of preventing contamination from germs and generation of odors, as well as easy maintenance.

Inside the dedicated device for installing the bags, there is a system that can make a culture solution from ISS drinking water, sterilize it, and supply it to each bag. In the future, the lettuce and culture solution will be brought back to Earth and checked for food hygiene issues.

Accommodating long term stays in spacecraft for planetary exploration, and large-scale cultivation at accommodation facilities, are the focus of the study. As JAXA says, "We need a mechanism that enables humankind to be self-sufficient when they live in space for a long time. We would like to develop technology that is lightweight, easy to carry, and easy to cultivate."