Autumn Colors in Tokyo’s Showa Kinen Park: Where the Gold Grows on Trees 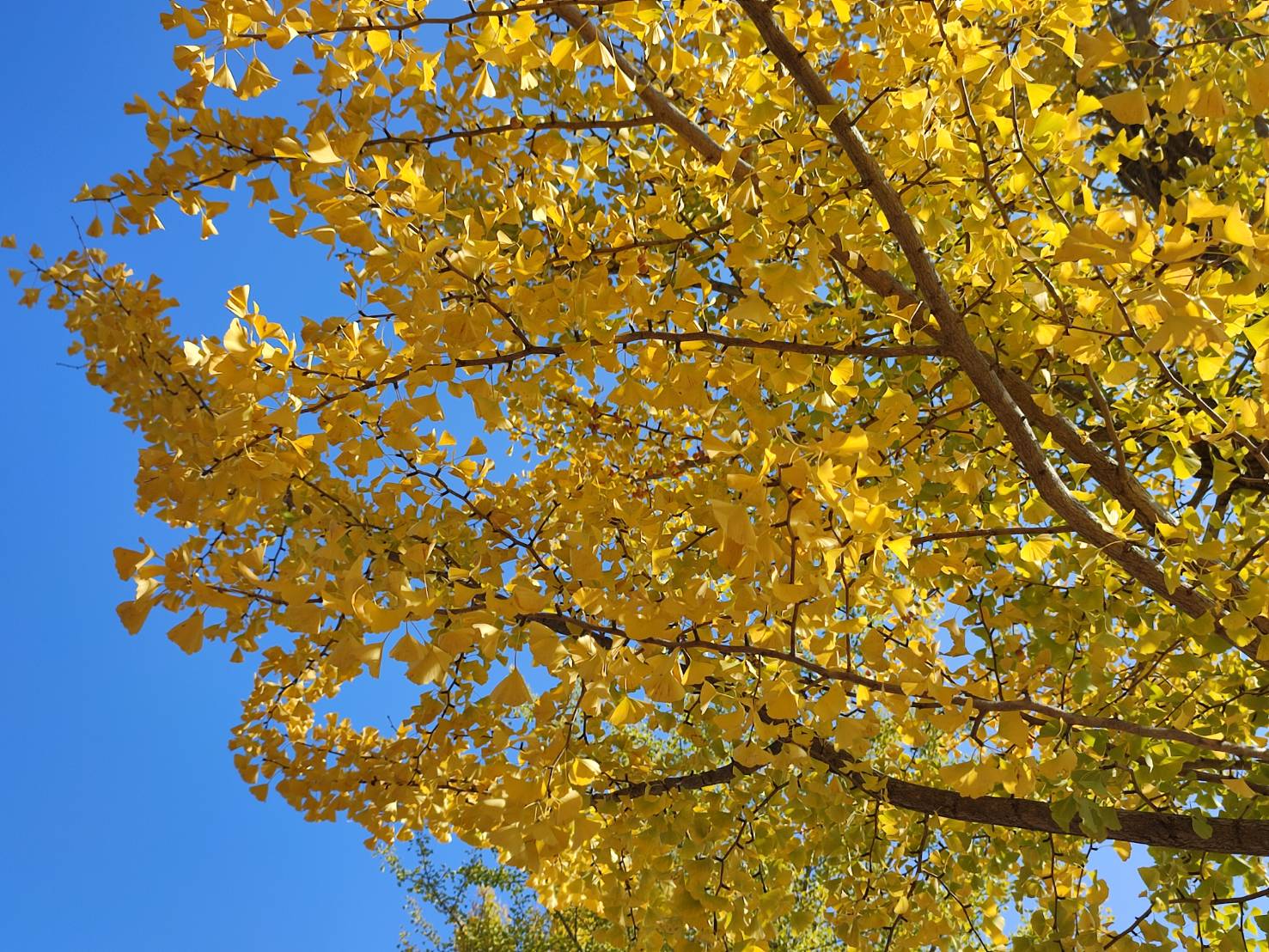 Although spring cherry blossoms are almost certainly the most noted seasonal feature of Japan in guides directed at foreign tourists, within Japan autumnal colors attract as much or more attention than the cherry blossoms.

As in the New England region of the United States, there are ongoing media reports giving the state of the colored foliage in areas particularly noted for their beauty. Aside from live cameras, there are now also smartphone apps that provide periodic updates on which areas are at their peak ー and predictions of when other areas will reach their peak.

Within the limits of metropolitan Tokyo there are numerous spots that are introduced in guides but most are relatively small scale. The two major exceptions, the Okutama area, and the Mount Takao ー Mount Mitake area, involve substantial travel time. They can also be difficult for families with small children or for those with a physical disability.

By chance I discovered” an alternative for viewing autumnal colors that gets relatively little attention in guides specific to this subject. This is the Showa Kinen Koen. It opened in 1989 to commemorate the Showa Emperor (often cited as Hirohito in English) who died February 24, 1989, terminating a reign that began in 1926.

My wife decided to visit the park because she had read a very positive evaluation of the Japanese style formal garden there. She had previously seen only a small fraction of the park when one of our children competed in a marathon.

My interest was less in the park as such than having an opportunity to further experiment with a closeup lens for my camera by using it for fall flowers and foliage.

To our delight we found that not only was the formal Japanese garden well worth seeing, the park had many other attractions ー including a stunning display of autumnal colors that had not yet peaked.

As a native of the American midwest, before coming to Japan, I associated autumnal colors with the vivid reds and yellows of maple trees. These figure prominently in Japan as well. However, in urban settings, it is icho (ginkgo) that brighten the streets and parks with vivid yellow leaves.

A double line of these trees greets the visitor shortly after passing through the wicket at the park.

Unlike other noted formal gardens in the Tokyo area, such as Rikugien, Higo Hosokawa Teien, or Hamarikyu Teien that are centuries old with origins in the Edo Period, the Showa Kinen Koen garden has existed for little more than three decades. Nonetheless, it is well worth seeing, especially when the autumn colors are at their peak.

Leaving the Japanese garden, we noticed a Bonsai Garden. Neither of us is particularly taken by bonsai, but we decided to see the exhibition as part of my review of the park.

We were pleasantly surprised. The trees on exhibit were not what either of us thought of as bonsai. Most were shrub size and a number displayed autumn colors.

To Picnic ー or Not To Picnic

Showa Kinen Koen is very picnic friendly. There are numerous grassy areas as well as secluded spots with tables and chairs. If you do not want to haul a picnic lunch to the park, you can assemble one on an ad hoc a la carte basis from the extensive offerings of a food court and supermarket in the lower levels of the Tachikawa Station, or from one of the same in the the several department stores between the station and the park.

There is also a barbecue area with a shop that sells barbecue sets for those who chose not to bring their own food.

In addition, there are stands and restaurants that offer typical park food and snacks. Most do not have indoor seating, which is just as well as long as the COVID-19 pandemic persists.

One restaurant offers more substantial fare, with both inside and outside seating. Prices are moderate.

Note that there are no stores near the Nishi-Tachikawa station (west entrance).

This is very much a park that tries to cover all age ranges, offering something for boisterous children to elderly people seeking a quiet stroll with friends.

Among the facilities for children are two trampoline sites, one for younger children and another for those up through middle-school age children.

There is a separate charge for the Emperor Showa Memorial Museum. It is not described here because it was closed when we visited.

Parking for standard vehicles is ￥840 JPY ($7.40 USD), with an exemption for those having proof of disability.

I do not recommend driving. Even on Wednesday the car parks appeared nearly full. Other details on parking and admission fees can be found here in English.

Rental options include tandem cycles. These seem to be particularly popular with young couples and young women. The cycling courses parallel the walking paths and are completely separate.

Rowboats and “cycle boats” that are propelled by peddling are available at the pond near the west entrance.  Rowboats are ￥700 JPY ($6.15 USD) for 60 minutes while “cycle boats” are charged at ￥700 JPY for each 30 minutes of use.

Although clearly designed with children in mind, on the day we visited most of the riders late in the day were seniors, possibly tired from walking long distances within the park.

More information in English can be found here.

Tachikawa is served by the JR East Chuo Line originating at Tokyo Station and passing through Shinjuku.  The ticket charge is ￥473 JPY ($4.15 USD).  From Tachikawa Station to the park is a level walk of roughly 550 meters.

Some Chuo Line trains go on to Itsukaichi, Aome, or Okutama, stopping at Nishi-Tachikawa Station, which is connected by a short elevated walkway to the west entrance of the Park.

Other rail alternatives include the JR Nambu Line from Kawasaki to Tachikawa, the Tama Toshi Monorail Line to Tachikawa-Minami or Tachikawa-Kita, and the Seibu Shinjuku Line to Hajima with a transfer to the JR line.

The park was clearly designed with wheelchair and stroller access in mind. It maintains a stock of wheelchairs that visitors may use at no charge. The many wheelchair accessible toilets are clearly marked on the park map.

[skk-026 While SKK does have some generic public toilets, most are designed to harmonize with their surroundings. Until you are close enough to see the pink and blue sign, it is possible to think that this is something for tea ceremonies (茶室).]

Despite being a continual resident of Tokyo since 1997, my first visit to this park was just this week. I had never before bothered to check on what the park offered. I assumed that because the site was originally an Imperial Japan Army and later a USAF airbase, it must be mostly playing fields and large grassy areas.

The location in Tachikawa was also off putting. I first came to Japan in 1971 when the airbase was still in use by the American military. It was returned to Japanese control in 1977.

Towns dominated by military facilities tend to be rather unappealing, whatever the country. Further, in those days Tachikawa was noted for keirin bicycle racing and occasional hooliganism on the part of disgruntled fans.

As a consequence, when my wife proposed that we use her day off to go to Showa Kinen Koen, I went with more curiosity than enthusiasm. Much to my surprise, I found the park delightful and expect to visit it more frequently in the future.

I am confident that others who visit the park will come away well satisfied as I did. And, if you miss the autumn colors, the park has flower beds and groves of flowering trees that bloom throughout the year.