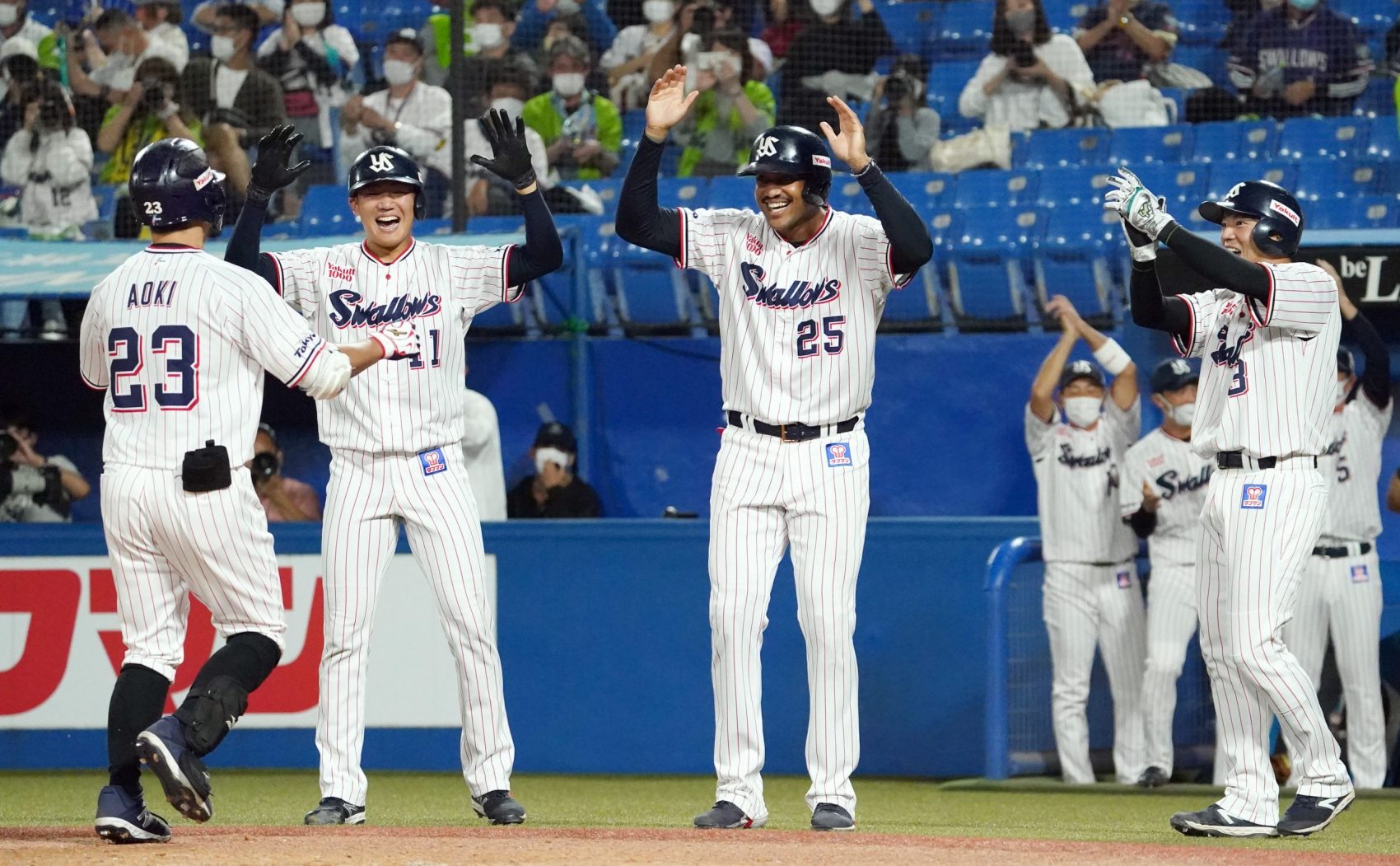 The Tokyo Yakult Swallows had plenty of reasons to celebrate during a recent 13-game unbeaten streak.

After leading Japan to the gold medal in baseball at the Tokyo Olympics, Tetsuto Yamada and Munetaka Murakami have found the perfect encore.

The two power hitters are behind a surprising run by the Tokyo Yakult Swallows that has the Central League team in first place, ahead of the big-spending Yomiuri Giants and the high-profile Hanshin Tigers.

Few would have predicted that with just over three weeks left in the 2021 season, the Swallows would be where they are.

The perennial underdogs finished last in the standings in 2020 and faced the prospect of another long season at or near the bottom. But after finishing fifth in the 12-team Interleague competition in May and early June, Yakult has been on a roll and took over first place in the Central League on Wednesday, September 22 after a 2-1 win over the Yokohama BayStars.

That win was part of an impressive 13-game undefeated streak that allowed Yakult to surge ahead of their Central League rivals.

Yamada and Murakami have played a key role in the team’s success.

They lead the league in runs scored (543) and are third in home runs (123) and tied for second in batting average (.257). Yakult also has the second-lowest ERA (3.45). Heading into the stretch run, Yakult has three games in hand on the Tigers and five on the Giants.

“When you look at the numbers, the Swallows are top three in all categories,” former Yakult slugger Alex Ramirez said on his YouTube Rami-channel. “The manager [Shingo Takatsu] has done a tremendous job. Nobody expected this and if they keep playing like this they can separate from the Tigers and Giants.”

Yamada, a power-hitting second baseman, has long been on the radar of teams in Major League Baseball.

The 29-year-old infielder was one of Japan’s best players at this summer’s Olympics where he helped the host nation to its first-ever gold medal in Olympic baseball.

He posted a .350 batting average and a .600 slugging percentage with seven RBIs in five games in the Olympic tournament.

From 2014 through 2019, Yamada had been one of the biggest stars in Japan, averaging 33 homers and 26 steals per year. His numbers were down in 2020 but he has recovered nicely this season with good power numbers.

Ramirez knows a thing or two about batting in Japan. The first foreign-born player to record over 2,000 hits, Ramirez also had 380 homers and drove in 1,272 runs over 13 seasons in NPB.

The 21-year-old infielder was also a key member of the Olympic team, batting .333 with five hits, one homer and three RBIs.

“Yamada has done a tremendous job and Murakami is one of the best hitters in Japanese baseball,” Ramirez said. “I predicted Murakami would hit 40 homers and he’s right there and deserves credit for his 100 RBIs. I’m not surprised because Murakami has that ability and he is going to do it for many years to come.”

Ramirez, who also had a largely successful stint as manager of the Yokohama DeNa BayStars from 2016-20, also praised Yakult outfielder Yasutaka Shiomi, calling him the best leadoff hitter in Japanese baseball.

As Ramirez points out, the Swallows are a complete team and their pitching has been just as impressive as the hitting over this recent run.

Takatsu, a former closer who spent 12 seasons with the Swallows before a brief stint in Major League Baseball with the Chicago White Sox and New York Mets, has done a masterful job with his pitching staff.

For relief, the Swallows often turn to Albert Suarez and closer Scott McGough.

“The Yakult Swallows are a complete team,” Ramirez said. “They are the best team in the Central League right now but Hanshin is right behind them and you can’t count out Yomiuri.”

The Swallows haven’t won the Japan Series championship since 2001. Prior to that, they won it all in 1993, 1995 and 1997 when they were led by the legendary manager Katsuya Nomura.

Now, Takatsu, who was a member of those great Yakult teams when he was known as “Mr. Zero” because he did not give up a single run in 11 Japan Series championship games, is hoping to bring that magic back to Yakult in the postseason.