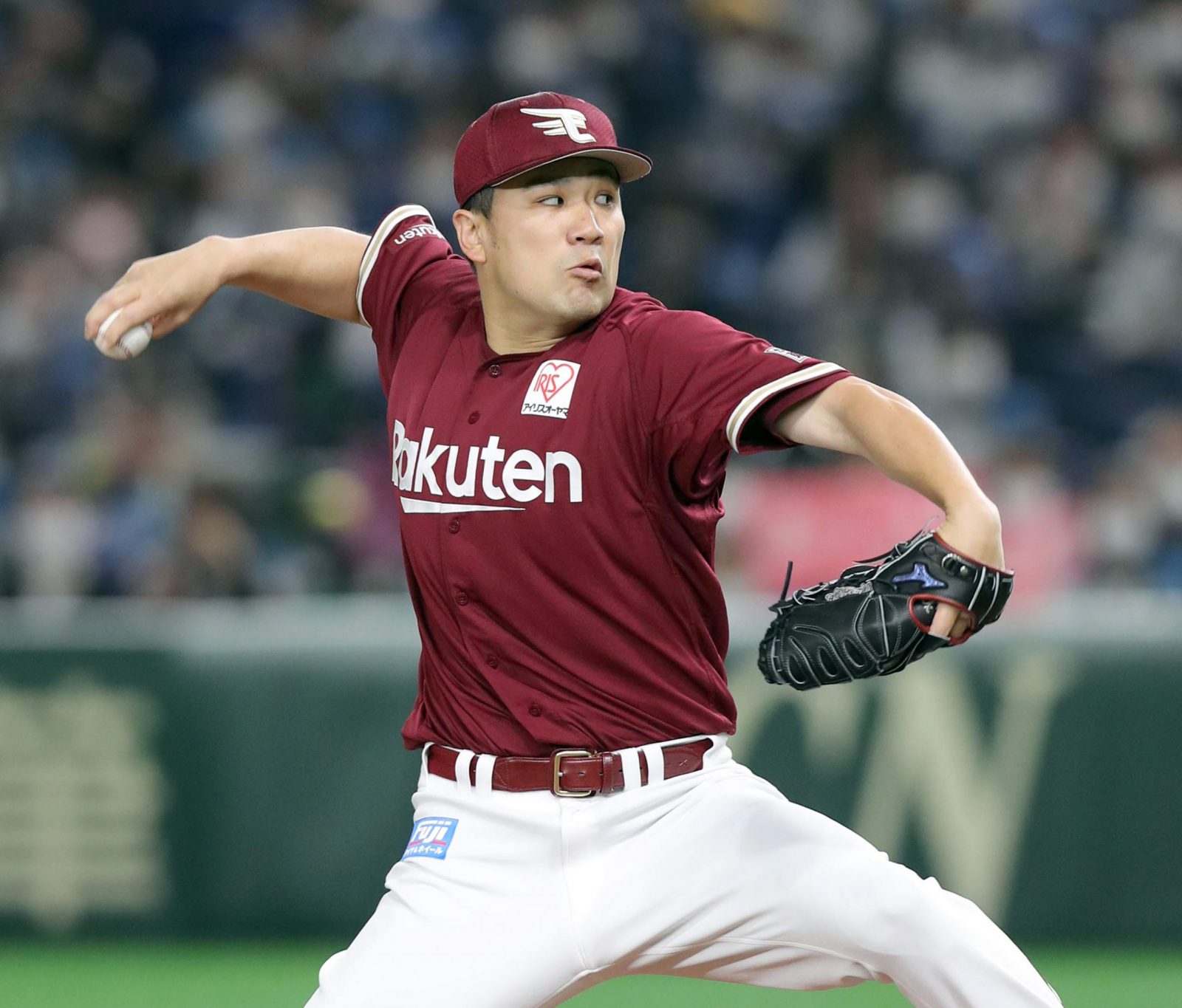 After missing the first three weeks of the season due to a right-calf injury, Tanaka showed some signs of rust early in the afternoon game against the Hokkaido Nippon Ham Fighters at Tokyo Dome.

Pitching in Japan for the first time in eight seasons, Tanaka recorded the first two outs of the game but then issued a walk and gave up a two-run homer to Nippon Ham slugger Sho Nakata.

Rakuten got a run back in the bottom of the first when Fumiya Kurokawa hit a single to center that scored the runner from second.

But Kazunari Ishii greeted Tanaka with a leadoff solo homer in the second inning to make it 3-1.

“We got a little momentum there and I felt that this put us in a position to get us back in it, so it was a bit of a wasted opportunity,” Tanaka said.


Tanaka settled down in the third when he retired the side in order.

After giving up a single to Taishi Ota, Tanaka started an inning-ending double play in the fourth when he snared a line drive off the bat of Ishii.

Tanaka retired the side in order again in the fifth. Perhaps not wanting to push the 32-year-old right-hander, Rakuten manager Kazuhisa Ishii replaced his starter after five complete innings.

Showing no signs of the calf injury, Tanaka left the game after giving up three runs on four hits. He struck out five and gave up one walk in a 75-pitch effort to take the loss.

Nakata belted a solo shot in the sixth and the Fighters won the game 4-1.

After the game, Tanaka paid tribute to the Japanese fans.

“It was great to be able to play in front of the Japanese fans today and I’m grateful for their support,” Tanaka said. “Things have been tough with [the coronavirus] so I appreciated them coming out to support us.”

After seven largely successful seasons with the New York Yankees, Tanaka signed a two-year contract with Rakuten in January worth ¥900 million JPY ($9 million USD) per year, a figure which makes him the highest-paid player in the history of Japanese professional baseball.


Returning to His First Team

Tanaka has a special connection to the Eagles.

He joined Rakuten as the club’s first draft pick in the 2006 NPB amateur draft and, as an 18-year-old, recorded 11 wins in his first season en route to being named the 2007 Pacifc League Rookie of the Year.

In 2013, he compiled a record of 24 wins and no losses with a 1.27 ERA and 183 strikeouts in 212 innings in leading his team to its first and only Japan Series championship.

Tanaka was on the mound in the ninth inning and recorded the final out in the Game 7 win over the Yomiuri Giants, a moment that resulted in boisterous celebrations at Rakuten’s home stadium in Sendai.

That win, which came just two years after the 2011 Great East Japan Earthquake and tsunami, brought a much-needed boost to the people of the region.

The magnitude 9 quake generated a tsunami over 10 meters high and resulted in a meltdown at the Fukushima Daiichi nuclear plant. More than 15,000 people died and 2,525 others remain missing.

Tens of thousands of people are still unable to return to their hometowns.

Tanaka’s homecoming should not only benefit the team but also the local economy, according to an expert in the field.

Katsuhiro Miyamoto, a professor emeritus of economics at Kansai University, estimates Tanaka’s return will generate $54.2 million USD (¥5.7 billion JPY) a year for his team and the local economy of Miyagi Prefecture.

His estimate assumes attendance at the team’s home stadium will increase by 20%, or more than 350,000 in total per year.

An example of just how powerful the economic boost of Tanaka returning will be are some of the extraordinary prices fans are willing to pay to see him.

On the website of a personal fan club set up by the Eagles, fans can purchase a special VIP course with an annual membership fee of $18,000 (about ¥1.96 million JPY).

The VIP course, which entitles fans to such perks as autographed Tanaka uniforms and VIP seats, was limited to just 10 fans but sold out in 14 minutes.

When he announced his return to the Eagles at a press conference in January,  Tanaka said that 10 years since the quake was an important number and gave the timing of his return special meaning.

The Eagles struggled after Tanaka left. After winning the championship in 2013 behind Tanaka’s stellar pitching, the team finished last in 2014 and has never finished higher than third in the six-team Pacific League.

Another bonus of Tanaka’s return will be the chance to represent Japan at the postponed Tokyo Olympics this summer. As a member of the Yankees, Tanaka wouldn’t have been permitted to take part had the Games taken place last year as originally scheduled.

The prospect of Tanaka pitching for Japan at the Tokyo Olympics is something the entire nation can get excited about.

In his press conference announcing his return to the Eagles, Tanaka said he would like to pitch for Japan if selected. Japan manager Atsunori Inaba was at Tokyo Dome on Saturday to witness Tanaka’s return.

While Tanaka didn’t get the win, Inaba is sure to be impressed with the way the veteran right-hander settled down after a shaky start.