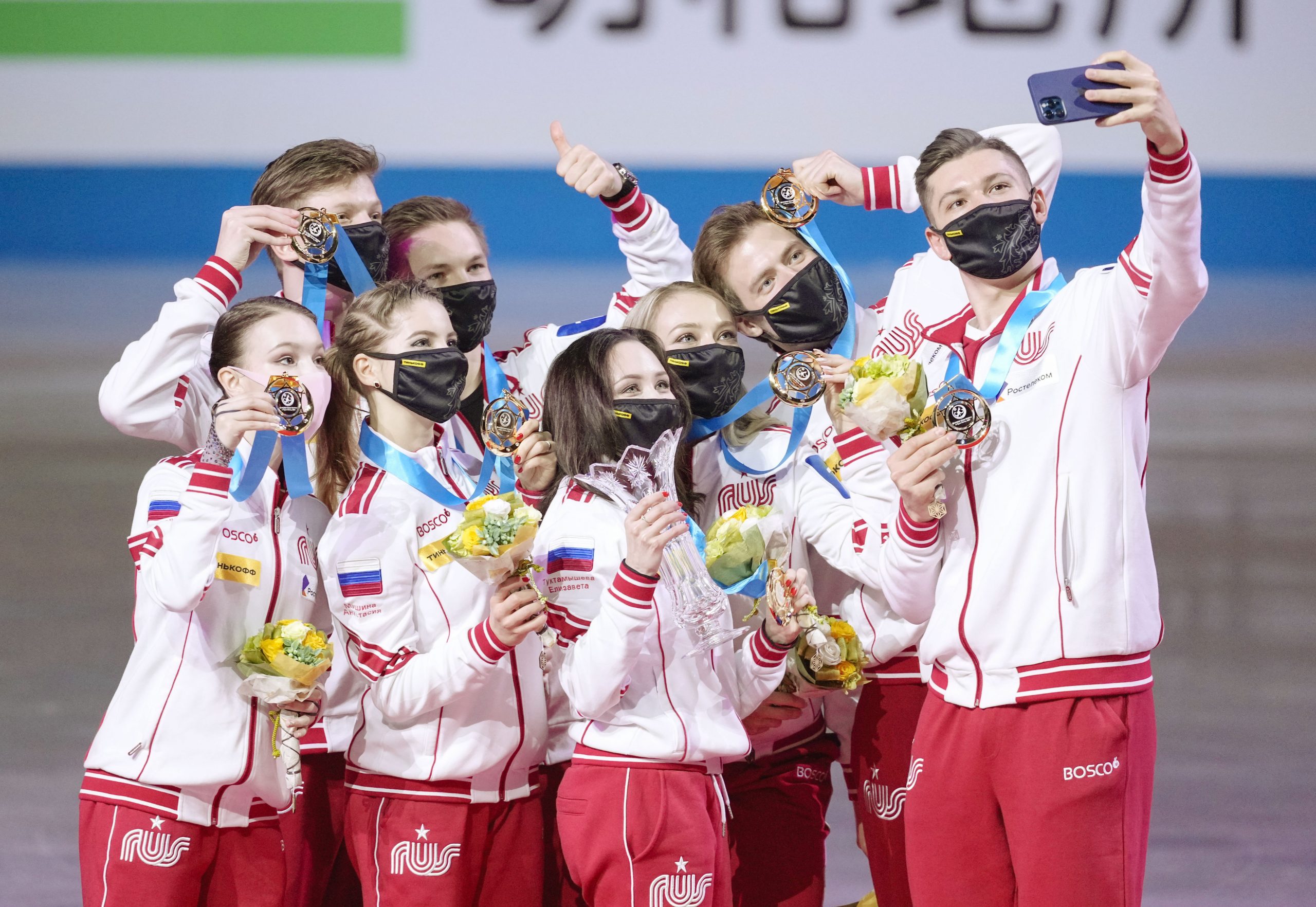 Team Russia skaters pose for selfies after winning the World Team Trophy on April 17 in Osaka.

The Russians led wire-to-wire to capture their first championship with a total of 125 points in the event that has now been held seven times. The United States came in second with 110, while Japan took third on 107.

Shcherbakova skated to “Morning Passages” by Philip Glass and landed a quadruple flip and seven triples to take the women’s free skate with 160.58. Though the International Skating Union does not calculate an official combined score for both programs in this event, Shcherbakova’s total tally was 241.65.


“I really wanted to show good skating,” Shcherbakova stated after her victory. “I was trying to enjoy it. I was really proud to be here and skating for Team Russia.”

Added Shcherbakova, “I couldn’t let up after Stockholm because of this competition, but now that this is over, I can finally relax.”

Kaori Sakamoto was the surprise of the evening, as she put on a powerful performance to “The Matrix” and placed second behind Shcherbakova with a career-best 150.29.

Sakamoto landed five clean triples, had an edge call on a triple lutz and a quarter call on a triple salchow, but earned level fours for her spins. It was an impressive effort by the Kobe native so close to home.

“I have been tired since I entered the competition,” Sakamoto commented. “But at the end, I wanted to finish with a smile. "I felt like I was instinctively in a state where my condition was broken. I’m glad I was able to do it.”

Russia’s Elizaveta Tuktamysheva, this season’s world silver medalist, was third in the free skate with 146.23, and third in total at 226.58.

She competed to “Chronicles of a Mischievous Bird” and landed eight triples, including two triple axels. It was an off night for the 2015 world champion, however, as she earned only level threes on all of her spins.

“I want to say I’m so proud of my team,” said Tuktamysheva, the team captain for the competition. “We all skated so good after a difficult competition, after worlds we were so tired. We showed all of our power here.”

Rika Kihira, who has been nursing a strained back this week, was fifth in the free skate with 132.39. She did not attempt a quad salchow or triple axel in her skate to “International Angel of Peace” and was clearly not in her best form. Kihira’s combined score was 202.13.

“I could not get a feel for the double toe or the flip because I could not practice due to the pain,” Kihira remarked. “I thought I was able to get off with a good feeling. I wanted to make no mistakes.”

Mishina and Galliamov won the pairs free skate with 151.59. Alexa Knierim and Brandon Frazier of the U.S. were second on 133.63, with Japan’s Riku Miura and Ryuichi Kihara coming in third at 130.83.

With Saturday being the only day that two-time Olympic champion Yuzuru Hanyu was not scheduled to skate in this event, there were blocks of empty seats inside the arena.

The World Team Trophy will conclude with the Exhibition Gala on Sunday afternoon.