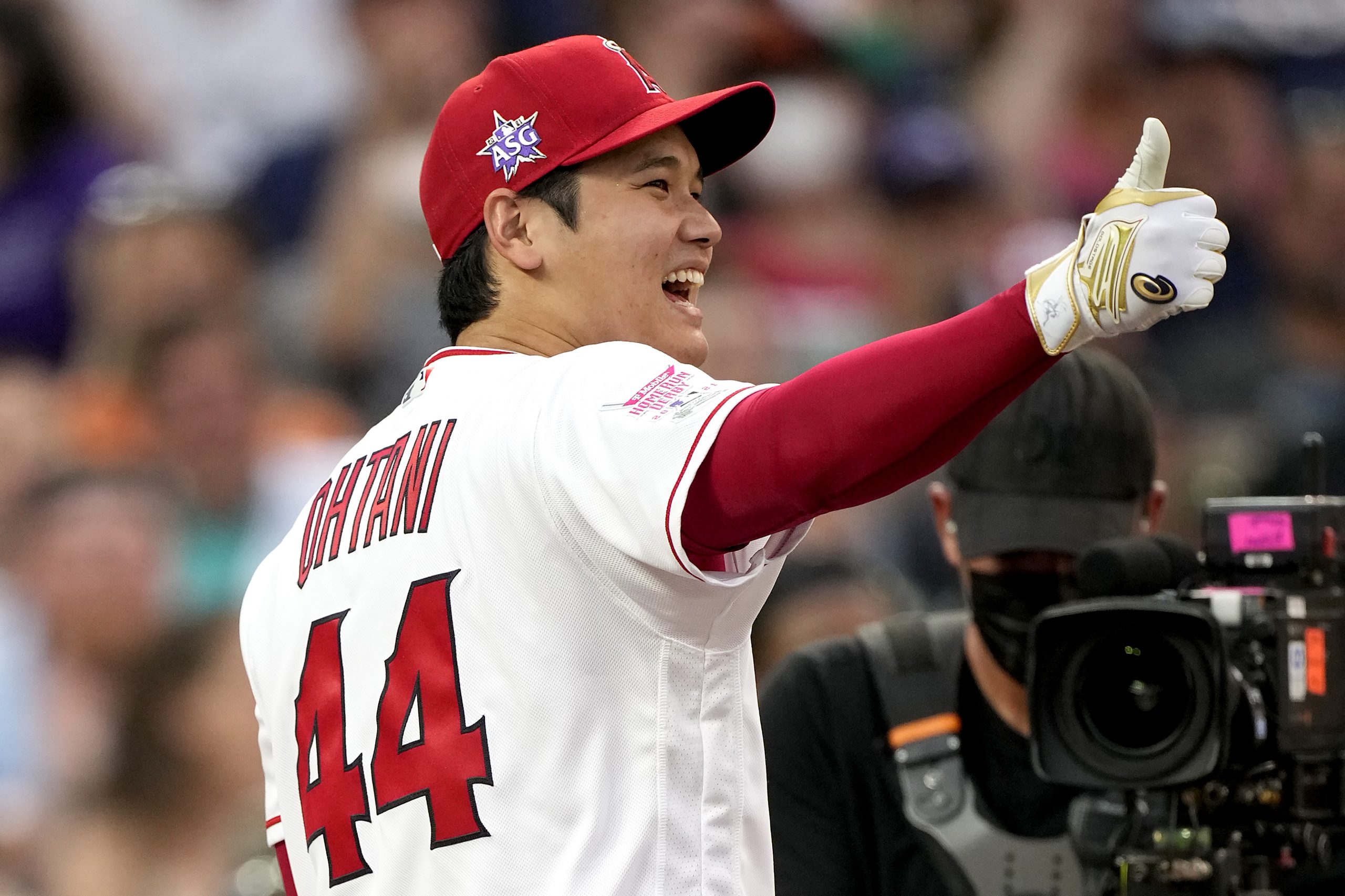 Shohei Ohtani gives the thumbs up during the first round of the MLB All -Star Game Home Run Derby on July 12 in Denver. (David Zalubowski/AP)

Shohei Ohtani couldn’t hide his excitement after learning that American League manager Kevin Cash had chosen him to be the starting pitcher in the Major League Baseball All-Star Game.

The unexpected news on Monday, July 12 overshadowed news on the same day of the Los Angeles Angels star becoming the first Japanese to participate in the Home Run Derby, an All-Star week event that has been held since 1985.

Ohtani, who received the biggest pitching assignment of his four-year MLB career, will also be the AL’s leadoff hitter.

Los Angeles Dodgers hurler Hideo Nomo was the first Japanese pitcher to start in an MLB All-Star Game, famously capturing fans’ attention on both sides of the Pacific Ocean on July 11, 1995, in Arlington, Texas.

“To be named the starter, I was really not expecting that at all,” said Ohtani, who leads the majors with 33 home runs. “But it’s a huge honor and I’m going to try my best.”

Baseball fans are witnessing the exploits of a 27-year-old this season whose two-way contributions haven’t been seen in more than a century. On May 13, he became the first MLB player to bat in the leadoff position a day after serving as a starting pitcher, according to the Elias Sports Bureau.

Ohtani’s titanic home-run blasts have thrilled fans and generated excitement since the season began in April. He’s batting .279 with 70 RBIs and 12 stolen bases. He leads MLB in extra-base hits (56) and total bases (210).

Quite simply, Cash and other MLB decision makers recognize the buzz that Ohtani creates and giving him the rarest of opportunities was something that they could not pass up.

“It came down to, we all know Shohei was voted in as the DH and he was one of five starting pitchers voted in by the players,” Cash told reporters. “Kind of took that to heart. I think we would all respect what he’s done and meant to our game this year. This is what the fans want to see. It’s personally what I want to see. And to have the opportunity to do something that’s a generational talent, pretty special.

“I begged Major League Baseball to tweak the rule for [the All-Star Game], because if they didn’t, I know I’d screw it up the rest of the way, pulling pinch-hitters and DHs. For this game, we’re going to be allowed to use Shohei as two players. He will be the starting pitcher and the DH, and when he’s done pitching, he can remain in the game and then we can transfer in the next DH after his day is over at the plate.”

National League manager Dave Roberts, the Los Angeles Dodgers skipper who was born in Okinawa, named Washington Nationals right-hander Max Scherzer his starting pitcher. Scherzer is 7-4 with a 2.66 ERA in 17 starts this season. He has 134 strikeouts in 98 innings.

Asked for his impressions of his starting pitching counterpart, an eight-time All-Star, and 14-year MLB veteran Ohtani said he’s awed by Scherzer’s long list of accomplishments and singular focus on the mound.

“Obviously the difficult part is the preparation, you prepare differently as a pitcher and a hitter, and it’s different for me every day,” Ohtani remarked. “Just getting used to the preparation, that’s the biggest challenge.”

Collectively, Scherzer said, MLB pitchers follow Ohtani’s rapid rise as one of the game’s most feared sluggers with astonishment.

“We just laugh. We laugh because, you know, it’s such an amazing accomplishment, every milestone,” Scherzer commented. “He keeps hitting or how he keeps leading the league in certain categories, and you know, really it’s my teammates that come back at me and [remind me], I still haven’t got a hit.”

Inevitably, all-time great Babe Ruth’s name came up during the large media gathering in the Mile High City, and Ohtani was asked to address the following question: “How much do you know about him, and if you look at all the history and stats, what does that mean to you?”

His answer revealed that he’s not just a player, but a student of the game, too.

“Obviously I’ve never seen him play live, but [I’ve] seen a lot of footage,” Ohtani said. “If you’re a baseball player, you’ve heard his name before. He’s a legendary figure. It’s a huge honor to be compared to somebody like that. All I can do is try my best and see how my season and career ends up.”

After elbow and knee injuries limited his opportunities to be a two-way player over the previous two seasons, the pride of Oshu, Iwate Prefecture, is healthy and displaying his world-class talent on a daily basis in 2021.

“Last couple years I had some surgeries and I wasn’t fully healthy and I wasn’t able to do what I wanted to do,” said the 27-year-old known throughout baseball as “Shotime.”

“It was frustrating. This season I’ve been healthy and able to do my thing and enjoying every day. So far, it’s been really great this year.”

For Ohtani, the chance to bat against Scherzer is a bid deal. He relished the competition, the challenge.

“Compared to the past seasons, I hear a lot more cheers when I’m hitting or when I’m on the mound, and being able to face great pitchers like Max right here, it’s getting ー helping me raise my level of my game,” Ohtani noted. “So I just want to continue to face all these great players and try to keep on getting better.”

Ohtani Falls in Dramatic First Round at Home Run Derby

Juan Soto outlasted top-seeded Ohtani in a second tiebreaker to win their mesmerizing duel in the Home Run Derby. New York Mets slugger Pete Alonso went on to defeat Trey Mancini of the Baltimore Orioles 23-22 in the final round to win the eight-player event.

Ohtani couldn’t match Soto in the second tiebreaker, hitting a grounder on his first swing, which promptly eliminated him.

Adding up the opening round, the first tiebreaker (five swings) and the second tiebreaker, Soto knocked out 31 home runs. Ohtani finished with 28, including a 513-foot (156.3-meter) blast, the fourth-longest in Home Run Derby history in the Statcast era (since 2015).

Ohtani had a slow start in the three-minute first round. He bashed his homer after 50 seconds had elapsed, then found his hitting rhythm and caught fire. He matched Soto’s 21 homers to force the first tiebreaker.

During a timeout in the opening round, Ohtani spoke to injured Angels teammate Mike Trout, and their brief chat appeared to help him get back on track doing what he does best: crush home runs.