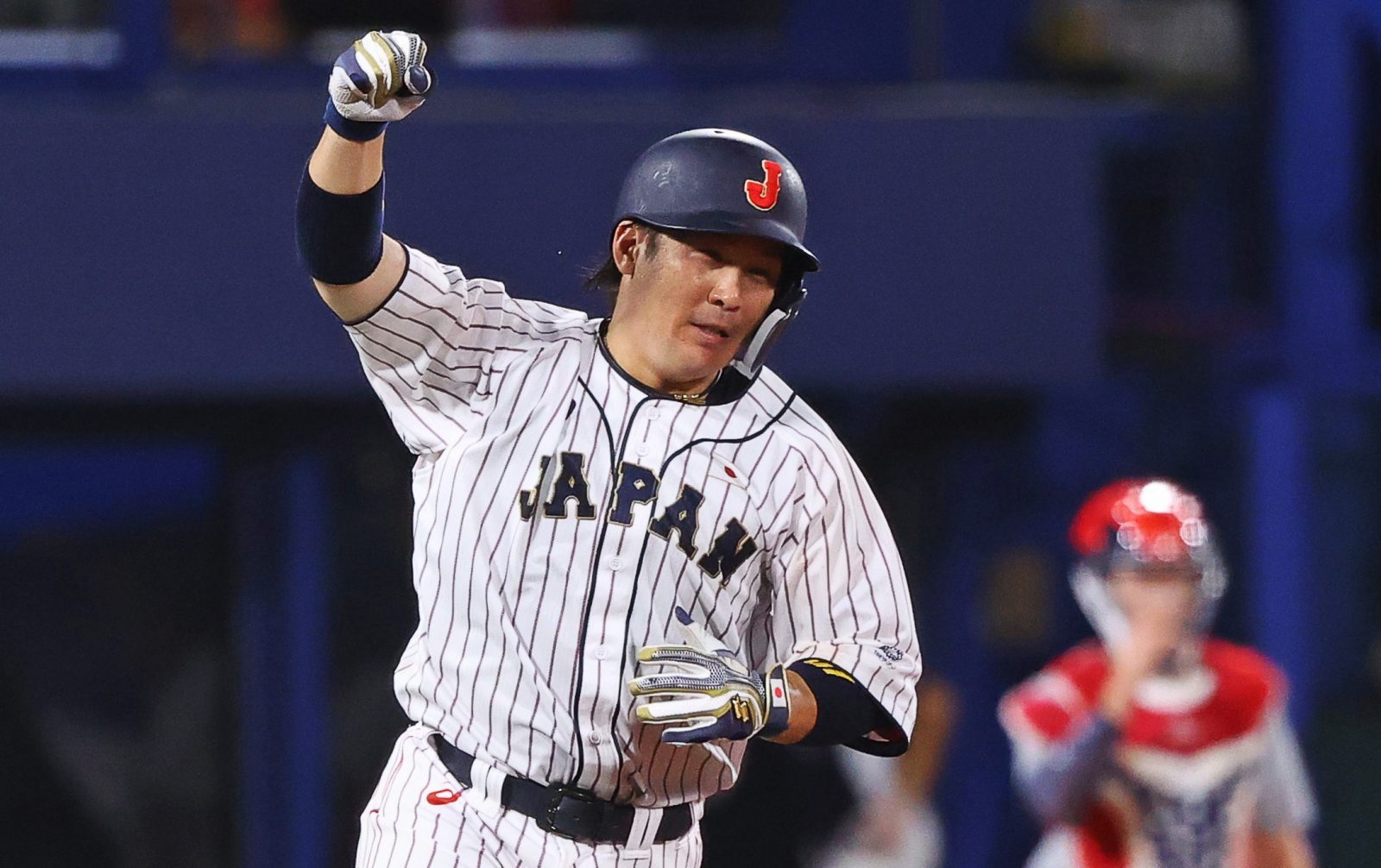 Japan's Takuya Kai celebrates his walk-off single in the 10th inning against the United States in a Olympic baseball tournament second-round game at Yokohama Stadium on August 2. (REUTERS/Jorge Silva)

Takuya Kai hit a walk-off single in the 10th inning on Monday, August 2, as Japan rallied to beat the United States 7-6 and advance to the semifinals of the baseball tournament at the Tokyo Olympics.

Japan tied the game at Yokohama Stadium 6-6 in the bottom of the ninth on Yuki Yanagita’s grounder to second that allowed Seiya Suzuki to score from third.

Under the tournament’s tie break rule, the U.S. started the 10th with runners at first and second and Japan pitcher Ryoji Kuribayashi did a superb job of retiring the side and keeping the Americans off the scoreboard.

In the bottom of the 10th, Japan also started with runners at first and second and Ryoya Kurihara laid down a perfect sacrifice bunt that advanced the runners.

That set the table for Kai’s hit off of Edwin Jackson Jr. over the head of the right fielder that allowed Yanagita to score from third with the winning run.

“That was a situation in which you had a lot of options,” Kai said. “I just tried to stay focused and get a good swing in and everything worked out. Kuribayashi did a great job holding them.”

Kuribayashi was the winning pitcher. Jackson Jr. took the loss.

Japan will face defending champion South Korea in the semifinals on Wednesday, August 4.

Japan took an early 2-0 lead in the third on a Masataka Yoshida single to left that scored Hayato Sakamoto from second. Sakamoto continued his hot batting with a two-out double to center off U.S. starter Shane Baz.

The hosts then made it 2-0 on a Yanagita bases-loaded infield single to short, scoring Yoshida and knocking Baz out of the game.

It didn’t take the U.S. long to regain the lead. Japan starter Masahiro Tanaka gave up his first walk of the night in the fourth to Triston Casas, and Tanaka’s former New York Yankees teammate Todd Frazier drilled a double to left that scored Casas.

Eric Filia was then hit by a pitch and Mark Kolozsvary singled to left, scoring Frazier, who advanced to third on the throw home attempting to get Casas at the plate.

The visitors took a 3-2 lead and knocked Tanaka out when Nick Allen doubled to right and Filia scored from second. Suguru Iwazaki replaced Tanaka and got the final out.

Tanaka left after giving up three runs on six hits and striking out six over 3⅔ innings. Not exactly the start Japan manager Atsunori Inaba had hoped for from the veteran pitcher.

Sakamoto doubled in a run in the bottom of the fourth to make it 3-3.

Koyo Aoyagi started the fifth and promptly gave up two singles before Casas connected for a three-run homer to make it 6-3.

Japan manager Atsunori Inaba went with two young pitchers in the first two games, Yoshinobu Yamamoto, 22, and Masato Morishita, 23, and they were impressive in contributing to wins over the Dominican Republic and Mexico.

Tanaka has had a solid first half of the season in his return to Japanese baseball after seven years with the New York Yankees.

The 32-year-old right-hander is 4-5 so far this season with a 2.86 ERA and 76 strikeouts in 85 innings for the Tohoku Rakuten Golden Eagles.

Tanaka was a member of the 2008 Beijing Olympics team that failed to win a medal. He was just 19 then, the last time baseball was played in the Summer Games.

Earlier Monday, South Korea trounced Israel 11-1 to book a spot in Wednesday’s semifinals. Israel will face the Dominican Republic in the elimination bracket with the winner going to face the United States.

The defending gold medalists put on an 18-hit display in which Ji Hwan Oh and Hyunsoo Kim both homered. The game was called after seven innings under the tournament’s mercy rule.