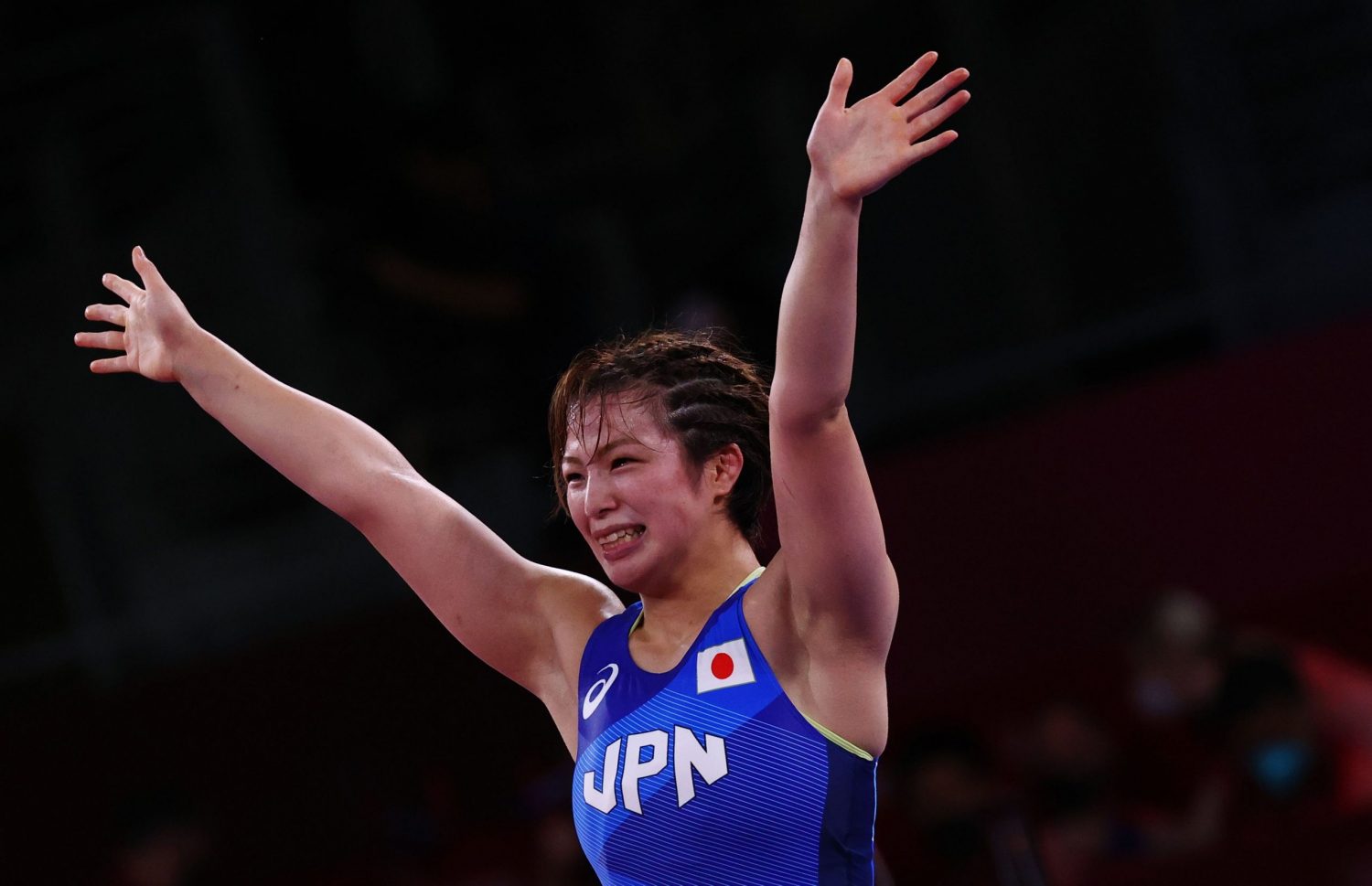 The 23-year-old Ishikawa Prefecture native has experienced success on the global stage in the 62-kg division in recent years, including a silver medal at the 2018 World Wrestling Championships in Budapest, followed by a third-placed finish at the following year’s world championships in Kazakhstan.

Kawai also collected a gold at the 2019 Asian Wrestling Championships in New Delhi. She advanced to the final by recording a 3-2 victory over Bulgaria’s Taybe Mustafa Yusein in the semifinals

Risako Kawai, Yukako’s older sister, also has a shot at capturing a gold medal at the Tokyo Games. The 57-kg freestyle weight class wrestler punched her ticket to the final by beating American Helen Louise Maroulis 2-1 in a semifinal match on the same day.

The 26-year-old elder sibling, who was the 63-kg gold medalist at the 2016 Rio Olympics (the category changed to 62 kg in Tokyo) famously moved down to the lighter weight class in order to give her sister a chance to compete in that division.

The strategy paid off.

Yukako Kawai is a new Olympic champion, achieving her own dream and getting ready to be Risako’s biggest supporter at Makuhari Messe the next day.

“This is really like a dream. I’m glad to get the gold medal that I had been dreaming about,” Yukako Kawai was quoted as saying by Kyodo News after her title match.

She added: “Until now, I’d only been in second and third place, and I’ve lost when I needed to push a little further. I was really happy to hear them say ‘Olympic champion’ and it was a great day. My sister’s match still remains. But I think I have passed the baton to her in a good way.”

For Tynybekova, collecting the silver was a big deal, but it was her disappointment that spilled out.

“This is the first silver medal in the history of Kyrgyz female wrestling, but my goal was a gold medal,” Tynybekova told reporters after the final. “I went to great lengths at my training. I didn’t spare any effort. I want to say thank you to everyone who believed in me and supported me to the last second of the matches and waited and hoped for me to get results. I did everything I could. Today I could not make history. I failed to get a gold medal.”

Risako Kawai will face Belarus’ Iryna Kurachkina for the 57-kg title in an evening match at a TBD time.

Tsukimi Namiki secured the bronze medal at Kokugikan Arena in her match against Bulgaria’s Stoyka Zhelyazkova Krasteva in the semifinal. The Bulgarian won 5-0 as the judges confirmed her path to the gold-medal match, and Namiki was awarded the bronze medal.

It was a tough match for Namiki, who struggled to consistently land punches against the taller Krasteva. However, the Bulgarian quickly followed the Chiba native and returned blows, resulting in wins in all three rounds.

The 22-year-old Namiki had previously scored a bronze medal at the 2018 World Championships in New Delhi. This is the first time Japanese women boxers qualify to represent Japan in the Olympics. The women’s category of the sport itself was first introduced in London in 2012.

Namiki is therefore the second woman in history to claim an Olympic medal in boxing for Japan, following the stellar success of Sena Irie, who  grabbed the gold medal in the featherweight category on August 3.

The winners of the competition at the Tokyo Aquatics Centre were, as we might expect from a gymnastics mecca, the Russian Olympic Committee.

Svetlana Romashina and Svetlana Kolesnichenko wowed the onlookers with a free routine with 98.800 points, comfortably putting them in first place with a total of 195.9079. The free routine with the theme of spiders, together with their technical routine performed on August 4, was a showstopper.

Romashina, 31, is known as the joint greatest artistic swimmer in history. She had previously gained three consecutive team gold medals starting with Beijing in 2008, and two consecutive duet gold medals beginning with London in 2012, making this her sixth Olympic gold.

Ukraine’s Anastasiya Savchuk and Marta Fiedina, who is just 19, placed third and gained bronze medal. Savchuk had been part of the team that came fourth in Rio de Janeiro, and was looking for a chance to step onto the podium in Tokyo.

The Japanese duo composed of Yukiko Inui and Megumu Yoshida failed to qualify in the medal range in the artistic swimming duet free routine final. With a robot-themed performance, they narrowly missed out on third place, finishing fourth with a score of 187.8166.

Going into the final, there was only a 0.5 points difference with Ukraine in the technical routine, yet the Japanese swimmers lagged behind a couple of points in the free routine.

The duo was trying to repeat the feat of Rio de Janeiro in 2016, when Yukiko Inui and Risako Mitsui ranked third.

U.S. track star Sydney McLaughlin broke her own record in the women’s 400-meter hurdles final at the New National Stadium, winning the gold medal in 51.46 seconds.

“I’m absolutely delighted,” McLaughlin told reporters after her record-breaking performance. “What a great race. I’m just grateful to be out here celebrating that extraordinary race and representing my country.”

McLaughlin, 21, displayed more stamina and speed over the final 100 meters to hold off her American teammate for the gold.

The gold medalist, who reached the semifinals in the event at the 2016 Rio Games, later described what she was thinking as the race headed toward the finish line.

“I saw Dalilah ahead of me with one [hurdle] to go. I just thought, ‘run your race.’ “The race doesn’t really start till hurdle seven,” McLaughlin said. “I just wanted to go out there and give it everything I had.

In other medal events, Poland’s Wojciech Nowicki won the men’s hammer throw gold with a top toss of 82.52 meters. Uganda’s Peruth Chemutai triumphed in the women’s 3,000-meter steeplechase in 9:01.45, a national record.

In the men’s 200, a riveting race ended with Canada’s Andre de Grasse as the champion in 19.62 seconds. He took home the bronze in the 100, which Italy’s Lamont Marcell Jacobs won three nights earlier.

The 33-year-old Matsushita, who also competed at the 2012 London Games, completed the five-man race in 35.540 seconds. Lithuania’s Mindaugas Maldonas won the quarterfinal in 35.466 seconds.

The semifinals are scheduled for Thursday, August 5, with Morishita assigned to race in the first heat at 9:30 a.m.

They finished the final in 26 minutes, 34 seconds on an afternoon of smooth sailing.

Belcher and Ryan amassed 23 points over the course of the sailing competition, including three wins in preliminary races, to secure the gold.

“We just couldn’t help ourselves,” Belcher commented after the race. “We were conservative at the start but then we had a bit of a sniff that we could get in a good position and thought ‘let’s just go for it’ It was just such an amazing feeling.”

Japan’s Keiju Okada and Jumpei Hokazono were fifth in the 10-team final, 43 seconds off the pace.

Argentina and Netherlands Win Semifinals, Move On to Face Off for Gold

India quickly got ahead, with Gurjit Kaur scoring a penalty corner goal 2 minutes into the game at Oi Hockey Stadium. However, captain Maria Noel Barrioneuvo put her stamp on the semifinal clash, scoring in the 18th and 36th minutes in Argentina’s 2-1 victory.

Argentina moves on to compete against the Netherlands, fighting to win its first gold medal in the women’s event. The women’s team has won two silver medals and two bronze medals in the past. The Olympic final is on Friday, August 6 at 7 p.m.

India will compete in the bronze-medal match against Great Britain, which will be held on Friday morning. If India wins the medal, it will be the first for the national team.

Earlier in the day, the Netherlands qualified for the gold-medal match by winning its semifinal round against Great Britain, 5-1. The first quarter ended tied at zero, but the Netherlands jumped ahead in the second quarter with a pair of goals in the 19th minute by Felice Albers and Marloes Johanna Maria Keetels. Albers added another goal, while teammates Maria Verschoor and Frédérique Matla each scored once.

In a back-and-forth match, Germany eked out a 3-2 triumph over Japan in the men’s team table tennis semifinals at Tokyo Metropolitan Gymnasium.

The table tennis team match consists of five total matches, four singles and one doubles. On the singles side, Tomokazu Harimoto won his duel over his German foe, Dimitrij Ovtcharov in four games. Harimoto also triumphed in a five-game match against Franziska.

Mizutani dropped his showdown with Boll in four games.

Japan will face South Korea in the third-place match on Friday.

“Whether we laugh or cry, the next match is our last and we will try and put everything out there,” Mizutani said, according to Kyodo News.