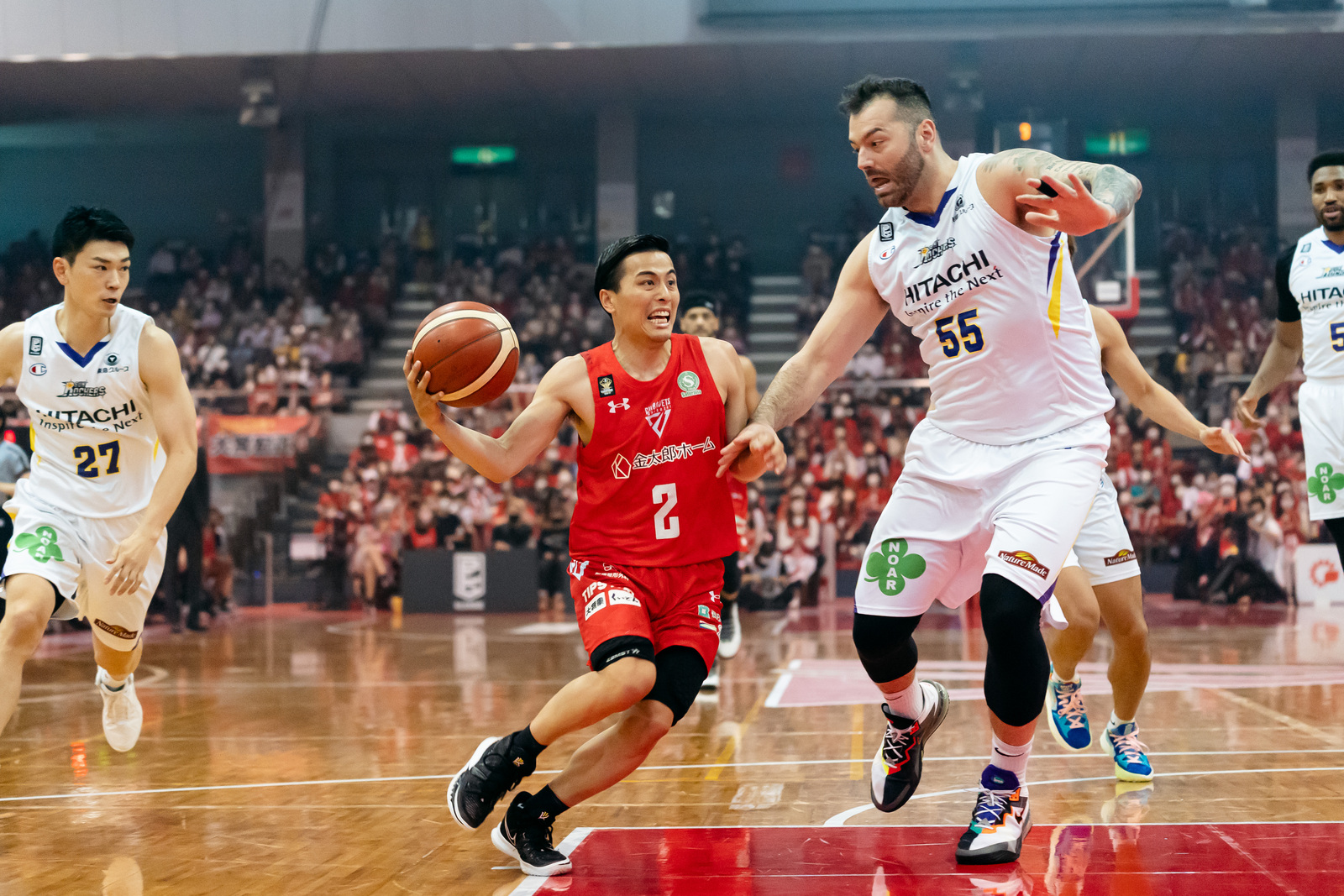 Chiba Jets guard Yuki Togashi runs the offense against the Sunrockers Shibuya at Funabashi Arena on May 8. (B.LEAGUE)

For the reigning champion Chiba Jets, the road to the B.League Finals begins right where they want it to: at home.

The Jets had a league-best 25-2 record in home games this season.

They earned their 25th win in the regular-season finale at Funabashi Arena on Sunday, May 8, edging the East rival Sunrockers Shibuya 73-71 before a spirited crowd of 4,369.

With 12 seconds left in the tight game, longtime Jets star Yuki Togashi sank a clutch 3-pointer to put his team ahead 71-67 and fire up the home crowd. Controlling the action, Togashi dribbled and dribbled and dribbled some more, milking the clock before unleashing a long-range shot over Shibuya’s Shuto Tawatari.

It was vintage Togashi.

After teammate Leo Vendrame missed a 3-point shot, Shibuya’s Kevin Jones grabbed the rebound and scored on a putback in the last second to account for the final score.

With the win, the Jets (35-13 overall, .778 winning percentage) secured the East Conference title by virtue of a higher winning ratio than the runner-up Kawasaki Brave Thunders (42-13, .764).

"I am grateful that we were able to play a match to decide the conference championship in front of many boosters,” Chiba coach Atsushi Ono said. “There have been a lot of hardships and cancellations due to COVID over the long season, but I think [our success] is the result of the players striving towards their goals and I would like to thank them.”

Chiba played the fewest games of any of the B1’s 22 teams, with positive COVID-19 tests on the Jets roster (as well as opposing teams’) impacting its schedule.

For the Sunrockers, who earned a playoff spot in 2020-21, Kevin Jones was the top scorer with 26 points. Koyo Takahashi scored 10 points and Josh Harrellson and Vendrame had seven and six, respectively.

Mooney, a University of Notre Dame alum, who began his pro career with the Perth Wildcats of Australia’s National Basketball League in 2020, said he’s pleased the Jets had a successful conclusion to the regular season.

“It was a good win for us,” Mooney told reporters. “We wanted to close out the season with the win. The fans, they’ve been great for us all year, so we wanted to get a win leading into the playoffs and build some momentum so we can keep playing well.”

In looking ahead to the upcoming three rounds of playoffs, with the championship round set for May 28, 29 and 31 at Tokyo Metropolitan Gymnasium, Mooney addressed his team’s objective, starting with the quarterfinals.

“I think anytime you start the playoffs there’s going to be a new sense of intensity and energy,” Mooney said, “just because it’s playoff basketball."

He added, “I think we are playing well right now, but we have to take it to another level because these other teams are going to be doing the same things.”

The Ryukyu Golden Kings had a shot at winning their 50th game in the regular-season finale on Sunday, but the Hiroshima Dragonflies had other ideas.

Hiroshima thoroughly dominated the second quarter, putting 32 points on the board and holding the Golden Kings to nine en route to an 86-57 victory at Okinawa Arena.

Ryukyu won the series opener 81-77 the day before.

Charles Jackson led the Dragonflies with 19 points and 12 rebounds.

Here are the matchups for the playoffs’ opening round, a best-of-three format:

With the league’s sixth season now completed, here’s a quick look at individual stat leaders for 2021-22.

After an action-packed opening round of the playoffs during Golden Week, four teams remain in the hunt for the B.League second-division postseason title: the Kagawa Five Arrows, Sendai 89ers, Fighting Eagles Nagoya and Kumamoto Volters.

The Five Arrows eliminated the Saga Ballooners, winning 94-90 and 105-94, while the Fighting Eagles topped the Koshigaya Alphas, 113-63 and 85-79. (Information on the other first-round series is below.)

The B2 semifinal matchups are Kagawa vs. Sendai and Nagoya vs. Kumamoto.

Nagoya has games scheduled for May 13-15.

To reach the semifinals, Kumamoto coach Don Beck’s team outlasted the visiting Nishinomiya Storks 122-110 in double overtime in Game 2 of the quarterfinals on Sunday, May 8.

The Volters had a 17-0 scoring run connecting the first and second overtime periods.

As a result, they outscored the Storks 14-2 in the second OT.

For Nishinomiya, DeQuan Jones, a University of Miami (Florida) product, had a game-high 43 points and grabbed 12 rebounds. Noriaki Dohara finished with 22 points.

When the final buzzer sounded, Beck said he was pleased with his team’s resilience in an intense game.

“The fight and tenacity of this team has become stronger as the season has passed, and even in the playoffs where that ability is tested, it is still continuing to be strong,” the coach said.

Games like the series finale against the Storks are important for youthful players’ development, according to Beck.

“The experience of playing well in these special situations will be a great source of [growth] for their future careers,” he reflected, referring to the pressure of playoff overtime basketball.

“I'm proud of their fight,” he added.

Kida credited his team for exerting energy from start to finish.

“I think it was the result of Kumamoto's endurance to the end,” Kida told reporters.

89ers Hold Off Firebonds in Game 3

The Sendai 89ers outscored the Fukushima Firebonds 46-26 in the second and fourth quarters, igniting an 89-72 home win in Game 3 of their first-round series on Monday, May 9.

Sendai held a 13-2 advantage in offensive rebounds, which helped the 89es ring up 13 second-chance points while holding the Firebonds to two.

Coach Hiroki Fujita’s squad outscored the visitors 50-26 in the paint.

Sendai’s Justin Burrell had 21 points, 11 rebounds and seven assists. Jerome Meyinsse chipped in with 16 points and nine boards. Taiki Okada scored 16 points on 7-for-9 shooting. It was Okada’s highest-scoring performance since a 21-point effort against the Storks on March 12.

The Firebonds’ Erik Murphy had 14 points and five blocks.