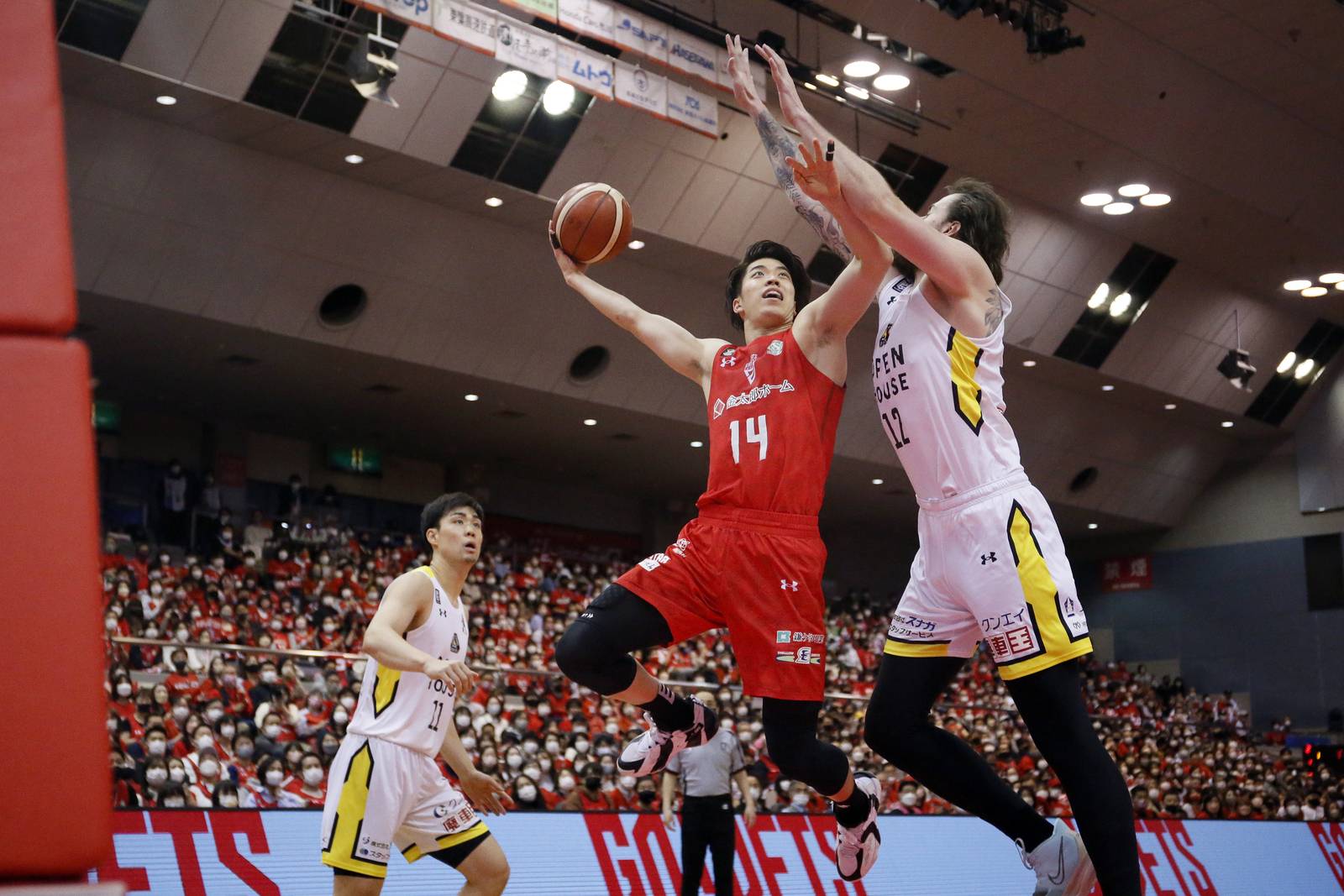 Chiba Jets swingman Takuma Sato looks to score against the Gunma Crane Thunders on March 20 at Funabashi Arena. (B. LEAGUE)

FUNABASHI, Chiba Pref. ― In the closing minutes of the Chiba Jets’ 31st game of the season, there was energy on the floor and energy in the stands.

The Jets delighted their fans with fast-paced action from the start of the game, and with 1:18 to play Takuma Sato scored on a putback after securing an offensive rebound, extending his team’s lead to 31 points. Hustle plays defined Chiba’s performance on Sunday, March 20.

After the remaining seconds ticked off the game clock, Jets fans stood and clapped, an enthusiastic show of approval for the home players’ effort, which produced a 103-74 victory over the Gunma Crane Thunders at Funabashi Arena.

Reigning champion Chiba (25-6) has rattled off eight consecutive victories in the B. League, a reminder of the team’s ability and focus.

“They were too good yesterday and today,” Wisman commented.

The Jets recorded an 88-75 victory in the series opener on Saturday.

A day later, Wisman was convinced that the Jets remain an exceptional team nearly 10 months after winning their first B. League title.

“To me, Chiba is the best team because of their depth,” Wisman said in a post-game interview session with reporters.

The Jets played the weekend series without starting big man John Mooney, a University of Notre Dame alum, and starting guard Shuta Hara due to injuries.

Veteran swingman Christopher Smith made his third consecutive start and finished with 24 points and eight rebounds. The Utah State product came off the bench in his first 27 appearances this season.

Also making a rare start was Ishikawa Prefecture-born guard/forward Raita Akaho, a speedy 23-year-old with abundant energy. Akaho didn’t score a point but had a steal and a blocked shot and was aggressive on defense.

Defense Pays Off for Jets

As a team, Chiba’s defense was a disruptive force, never enabling the Crane Thunders (16-20) to get into an offensive rhythm. The Jets forced 19 turnovers. They made 13 steals, with eight players getting at least one, including three by Gavin Edwards and two apiece by Josh Duncan, Yuki Togashi and Sato.

“They did a great job on us today on defense,” said Wisman, whose team was also missing a few key players to injuries, including point guard Kei Igarashi.

Ono said his team’s energy was excellent throughout the game. He cited effective ball pressure as “one of the keys” to victory.

He also said his team was aggressive while battling for rebounds, which resulted in a 17-3 edge in second-chance points. The hosts held a 43-26 overall advantage in rebounds.

Rock-solid power forward Duncan, who joined the Jets in 2018, had a game-high 26 points on 9-for-10 shooting along with five rebounds, two assists and two blocks. The Xavier (Ohio) University alum was 7-for-7 at the foul line.

Edwards, another Jets mainstay (since 2017) contributed 22 points and seven rebounds. Captain Togashi chipped in with nine points and seven assists, several of the razzle-dazzle variety to the delight of the fans.


Chiba Pulls Away as Game Progresses

The Jets took a 26-24 lead into the second quarter, and it was a positive sign for the reigning champs that Smith (10 points), Duncan (seven) and Edwards (six) had already asserted themselves on offense.

It was a glimpse of the way the game would unfold.

Duncan had nine second-quarter points, tops among both teams, and helped carry the Jets to a 54-42 advantage. Gunma’s Tensho Sugimoto sank a 3-pointer with 3 seconds remaining in the half to trim the lead to a dozen points.

Once play resumed, the Crane Thunders were unable to whittle away at the lead in the third quarter, and Chiba led 73-57 entering the final period.

Ex-Jets shooting guard Shannon Shorter brought veteran smarts and all-around excellence to the team in their championship season (11.9 points, 4.7 rebounds, 3.6 assists), appearing in 29 of his 54 regular-season games as a starter. Similarly, Smith provides a similar impact off the bench, as an energizing playmaker on both ends of the court.

Duncan said there’s a striking parallel between the way the former and the latter impact his team.

“Chris is doing that same thing this year,” Duncan said. “He fits in well within the team, an unselfish guy … and he’s helping us to win games.”

A season ago, Chiba had a 43-14 record entering the playoffs.

Asked by this reporter to make a comparison between the current Jets squad and the 2020-21 team, Duncan said he believes there are similarities.

“We’re trying to just focus on what we have this year, but I think it’s best when teams continue to get better,” Duncan said. “We’ve been working hard all year and now’s the time when it really counts, towards the end of the season, finishing strong. And that’s what we are trying to do now, and have a good run leading into the playoffs [in May].”

Of the B. League’s 11 Saturday-Sunday series, nine of them featured back-to-back wins by the same team.

A rundown of the two-game sweeps:

Elsewhere, the San-en NeoPhoenix earned a bounce-back, 82-68 victory over the Yokohama B-Corsairs on Sunday. Yokohama won the opener on the road, 79-68.

The title-chasing Utsunomiya Brex got back on track with a 74-66 decision over the visiting Levanga Hokkaido on Sunday. Hokkaido triumphed a day earlier, 98-89.