EDITORIAL | Why Does Japan’s Parliament Seem Lukewarm About Zelenskyy’s Address? 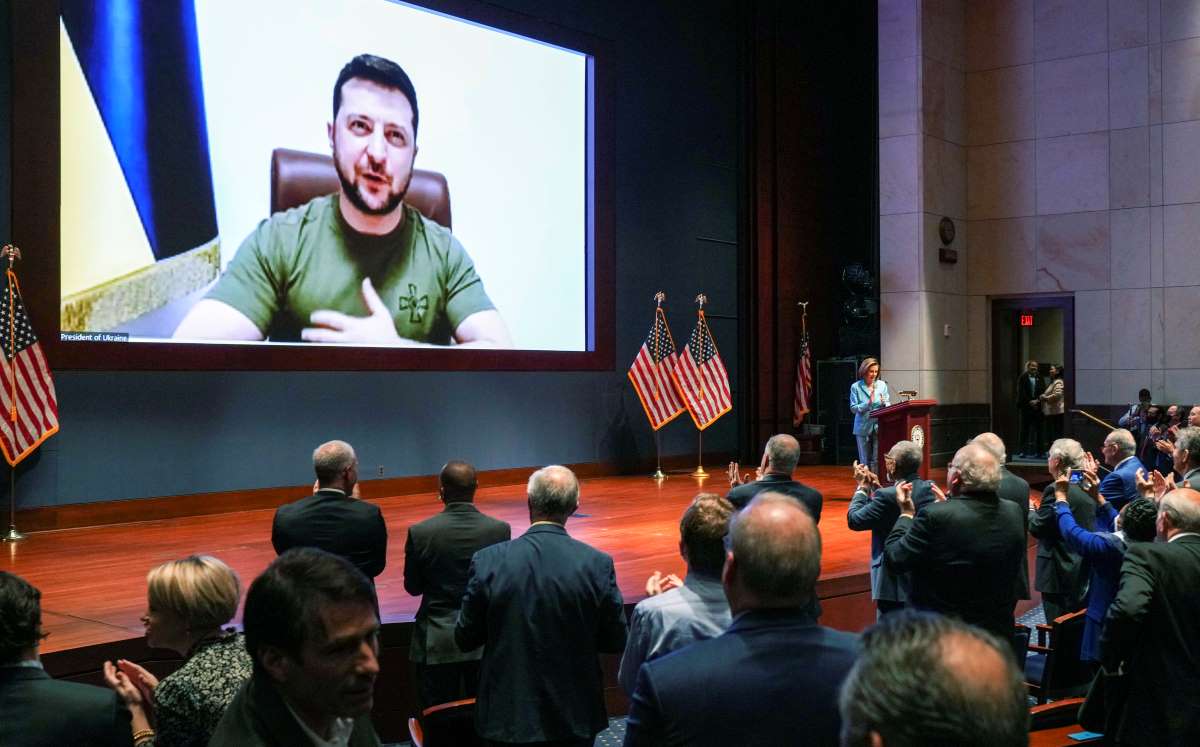 Members of Congress give Ukraine President Volodymyr Zelensky a standing ovation before he speaks in a virtual address to Congress in the U.S. Capitol Visitors Center Congressional Auditorium in Washington, Wednesday, March 16, 2022. (Sarahbeth Maney/The New York Times via AP, Pool)

Russia has inflicted deadly devastation on Ukraine. A theater in the southeastern city of Mariupol was turned into a pile of rubble by a Russian airstrike. Hundreds of people, including the elderly and children, are reported to have been sheltering there. Desperate rescue efforts continue to face significant difficulties.

Schools and cultural facilities were targeted by Russian shelling in the city of Merefa in the eastern province of Kharkiv Oblast. Heart-breaking images show the city turned into a battlefield — children crying, mothers utterly exhausted, and the elderly screaming in despair. Such wanton cruelty is impossible to forgive.

Ukrainian President Volodymyr Zelenskyy delivered a virtual address to the parliaments of Western countries — including the United States, United Kingdom, and Germany — calling on them to help his war-torn country.

The National Diet, Japan’s parliament, was also approached by Kyiv, and finally decided on March 18 that President Zelenskyy would deliver his address to Japan on March 23, after the three-day weekend.

The request was met with considerable resistance at first, ostensibly because virtual addresses in the Diet were unheard of and because of technical problems, such as the lack of a large monitor in the chamber.

Kenta Izumi, leader of the Constitutional Democratic Party of Japan (CDP), tweeted: “I want to protect the Japanese people and national interests. Therefore, a summit meeting and joint statement is an absolute prerequisite before an address is presented to the Diet.” He also posted on Twitter: “The content of the address should be within the scope of what is agreed between both countries. This is the way it should be.”

But Izumi’s words don’t merit discussion because CDP endorses the resolution of both houses of the Diet to “condemn in the strongest terms” Russia’s aggression against Ukraine.

On March 17, Sergiy Korsunsky, ambassador of Ukraine to Japan, made a formal request to the Speakers of both houses for President Zelenskyy to make a virtual address to the Diet. The Speakers responded by stating that they “take the request seriously” and “would like to coordinate with the respective parliamentary groups.”

At a meeting of the Budget Committee of the House of Councilors held on the same day, Prime Minister Fumio Kishida stated that he was “aware of the technical problems” but that “the government would like the Diet to discuss the issue and respond constructively.”

The words of the Prime Minister and Speakers lacked zeal.

Meanwhile, the Diet Affairs Committee Chairmen, Tsuyoshi Takagi of the Liberal Democratic Party (LDP) and Sumio Mabuchi of the CDP, met on March 18 and agreed that it was “essential” that President Zelenskyy deliver his address  “as soon as possible.”

There are no weekends or holidays on the battlefield. While the government is busy “coordinating,” innocent lives, including those of children, are being destroyed. Japan’s politicians must act with more zeal.

Japan needs to stop being a bystander in the face of the realities of war and hold serious discussions about what the country truly ought to do.