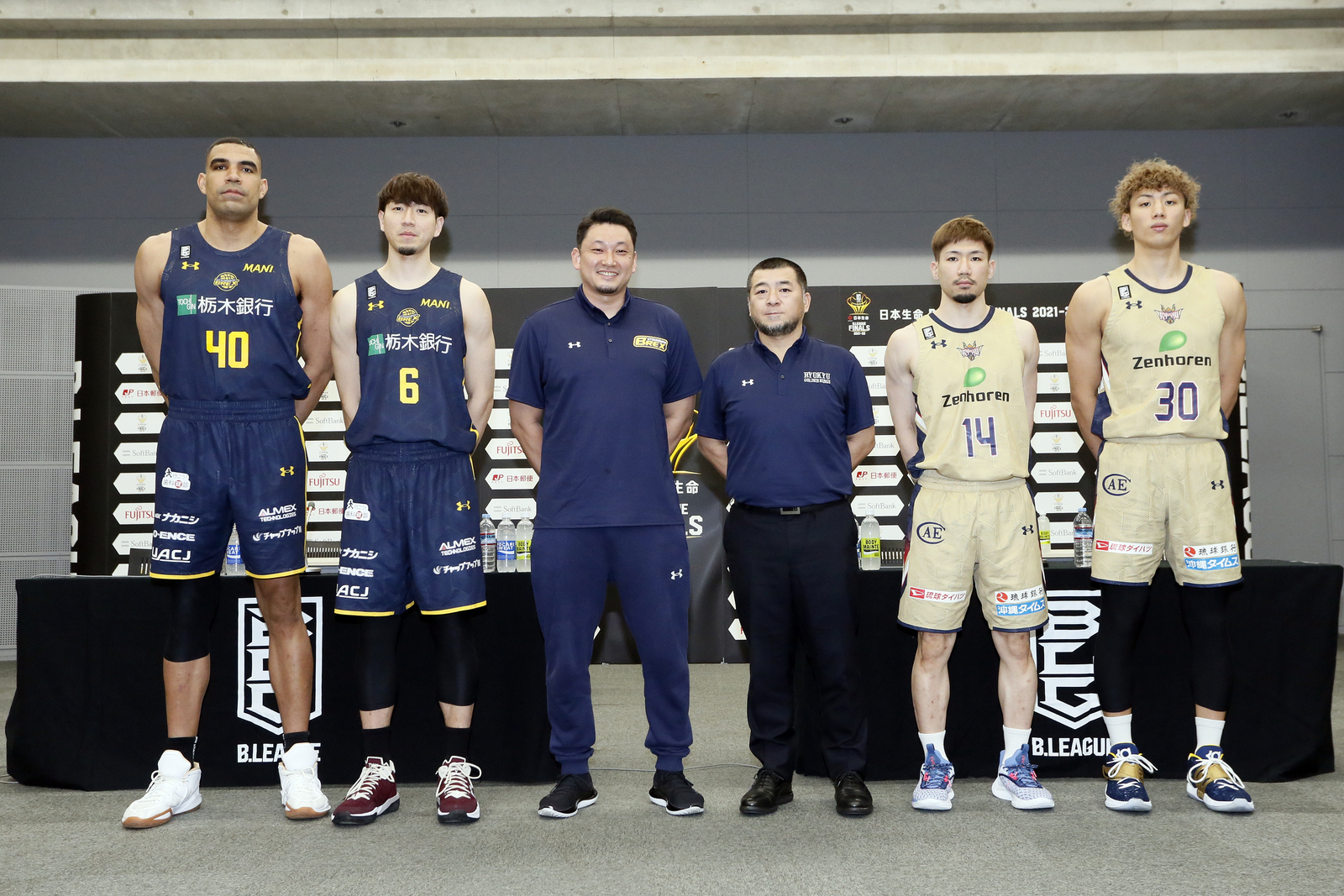 The Ryukyu Golden Kings have been the B.League’s best team since the 2021-22 season began in early October.

At the same time, the Utsunomiya Brex have been one of the league’s most consistently strong teams.

Which brings us to the end of the line for the 2021-22 B.League season: The West’s No. 1 club vs. the East’s fourth-place finisher in the B.League Finals, which gets underway on Saturday, May 28 at 12 PM at Tokyo Metropolitan Gymnasium.

Does either team have a clear-cut advantage for the best-of-three championship series?

Defense was a defining characteristic of their two regular-season meetings on December 11 and 12 at Brex Arena Utsunomiya.

Ryukyu won the opener 66-65, a game in which both teams shot less than 40% from the floor. Allen Durham won it with a buzzer-beating jumper.

In the rematch, the Golden Kings triumphed 65-62, holding the Brex to 37.6% shooting. Durham, who finished with 19 points, was Ryukyu’s lone double-digit scorer. Makoto Hiejima and Josh Scott, instrumental figures in Utsunomiya’s playoff run, led the hosts with 17 and 16 points, respectively.

Should we expect more of the same in the best-of-three championship series?

Golden Kings bench boss Dai Oketani, winner of two bj-league titles in his first stint as the team’s coach from 2008-12, dismissed the significance of those December games in the run-up to the Finals.

It’s “not relevant at all,” Oketani was quoted as saying by Basketball King.

Speaking on Friday, May 27 at a news conference, Oketani reflected on the Golden Kings’ journey to the Finals.

“Since the regular season began, we have grown as a team for each match, and even after entering the championship (playoffs), there was a lot of pressure, and we reached the final,” Oketani stated. “From here on, I want to enjoy basketball and fight while focusing on what we can do. While sharing the ball as a team, we would like to create our own shape and firmly connect it to the defense.”

More than five months have passed since the clubs’ last B.League showdown. And with a neutral-court venue for the Finals, the familiarity factor of home disappears.

Instead, both clubs’ fans will pack the 10,000-seat Tokyo Metropolitan Gymnasium, giving it a representative spirit of the nation’s hoop fans. Game 2 is on Sunday, May 29 at 4:05 PM. If necessary, Game 3 is scheduled on Tuesday, May 31 at 7:05 PM.

A Closer Look at the Golden Kings

The Golden Kings had a league-best 49-7 regular-season record, and they were No. 1 in rebounding (40.9 per game). Frontcourt standout Jack Cooley had a team-high 10.4 rebounding average (No. 4 in the league).

Throughout the season, coach Oketani’s squad played a determined brand of ball at both ends of the court. The Golden Kings averaged 84.4 points per game and held opponents to 72.9.

Ryukyu primarily relies on seven players to put points on the board: Dwayne Evans (16.7 ppg, which includes the first two playoff rounds), Durham (14.8), Cooley (12.7), Keita Imamura (10.9), Ryuichi Kishimoto (9.7), Koh Flippin (7.2) and Narito Namizato (6.2). The Golden Kings give a green light to Imamura and Kishimoto to let it fly from beyond the 3-point arc, with 344 and 339 long-range shots, respectively, through Sunday, May 22. As potent 3-point weapons, they open things up for other players on the perimeter and in the paint to create scoring opportunities.

The Okinawa-based team defeated the Akita Northern Happinets 74-60 and 77-56 in the playoff quarterfinals on May 13-14. The Golden Kings topped the Shimane Susanoo Magic 94-85 and 72-70 in the semifinals last weekend.

Cooley, a University of Notre Dame alum, was hobbled by a physical ailment against Shimane in Game 2, limiting his effectiveness. If he’s able to play close to his normal level, it’s a big boost for Ryukyu. But the Golden Kings also rely on Durham, Evans, Gary Hamilton and others to grab rebounds.

“I think it is important to keep focusing on what is in front of you without rushing to win, and to keep playing calmly for that purpose,” Oketani told reporters a day before the Finals.

Kishimoto said, “We would like to prepare well so that we can do our best as Kings. I think there will be a lot of pressure throughout the match, so the key is how we can play as usual.”

A Closer Look at the Brex

To reach the B.League Finals, Utsunomiya coach Ryuzo Anzai’s club won a pair of tough playoff series on the road.

Utsunomiya finished with 40 wins in 56 regular-season games in Anzai’s fourth full season at the helm. Last season, he led the Brex to a championship runner-up finish.

Like the Golden Kings, the Brex are a strong rebounding team. They averaged 38.3 rebounds per game, No. 4 in the 21-team circuit. Josh Scott, the team’s top rebounder, was fifth in the league at 9.8 per game.

Endo was hampered by a left leg injury in Game 2 against the Brave Thunders in a frustrating zero-point performance.

Fotu and Fieler were key offseason acquisitions as the Brex overhauled their roster after the departure of Jeff Gibbs (to the Nagasaki Velca), Ryan Rossiter (Alvark Tokyo) and L.J. Peak (Kumamoto Volters).

In his third season with the Brex, Hiejima had his best overall offensive campaign for the team. After averaging 11.5 ppg in the regular season, he increased his scoring output to 17.8 in the playoffs. And here’s what he did in the four playoff games (in succession): 24 points and six assists, 12 and seven, 14 and five, and 21 points and seven.

Scott’s inside productivity was another key factor in Utsunomiya’s two wins against Kawasaki: a pair of double-doubles on back-to-back days (14 points, 17 rebounds in the opener and 17 points and 15 boards in the rematch).

To reach the Finals, the Brex have played with a chip on their shoulders ― hungry, determined and gritty.

To make it this far as a wild-card team illustrates the parity and competitiveness of the B.League.

Brex veteran guard Hisanori Watanabe, who joined the club in 2013, said the team enters the Finals with a renewed sense of purpose.

“Although the members have changed, the experience of the regular season and last year’s Finals has given us a surprising amount of unity,” Watanabe told reporters.

He added, “I think it’s amazing that we were able to bring it to the finish so far in less than a year. ”

Anzai, who served as an assistant coach under Tom Wisman when the Brex won the B.League’s inaugural championship in 2017, said the team has embraced its underdog status.

“We got the right to challenge,” Anzai was quoted as saying by Basketball King, describing the team’s mindset for the Finals. “So I just have the feeling of taking on the challenge.”