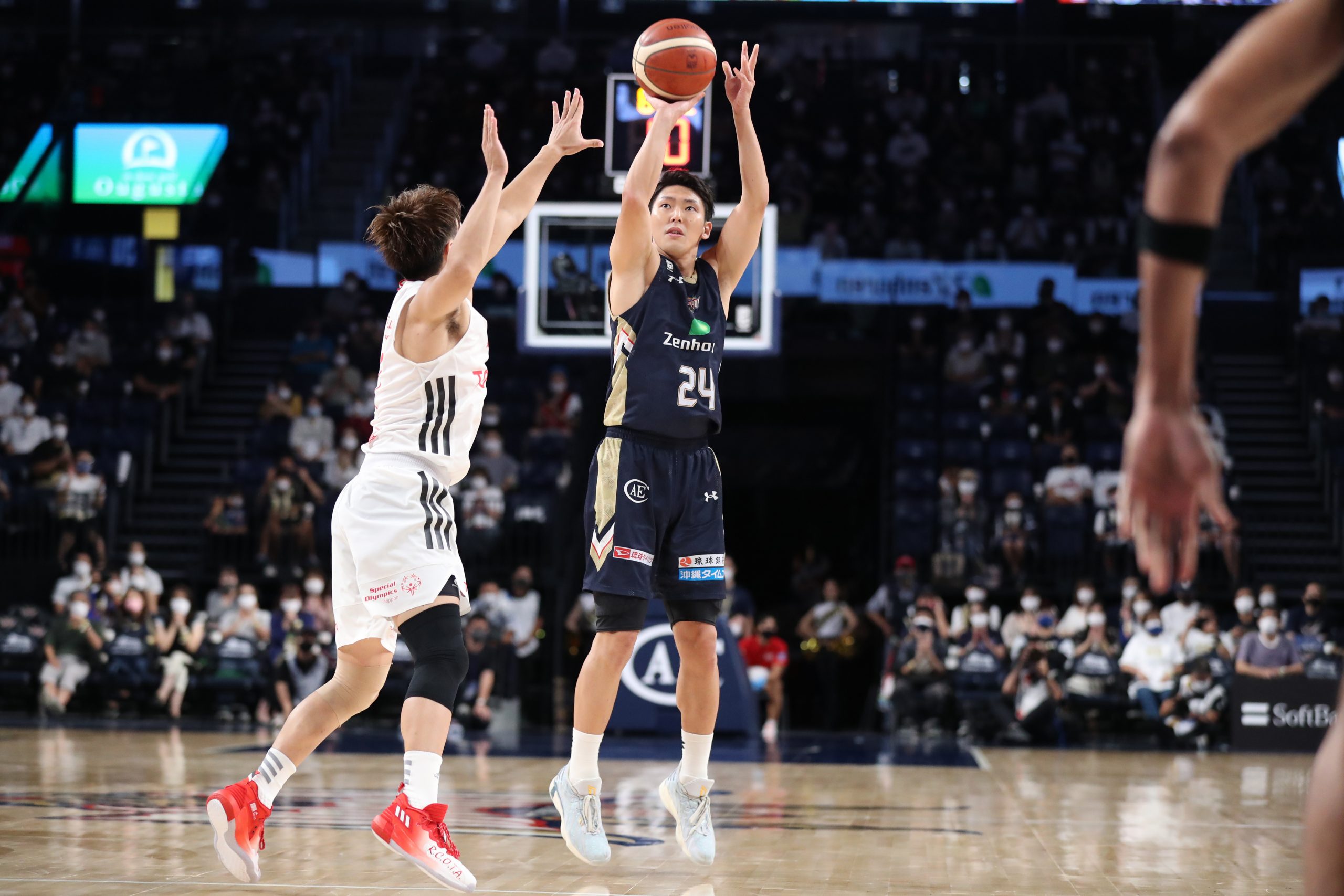 Ryukyu's Naoki Tashiro takes a shot from beyond the 3-point arc in the fourth quarter on September 30 at Okinawa Arena. The Golden Kings beat the Alvark Tokyo 63-62. (B. LEAGUE)

The Ryukyu Golden Kings trailed 47-32 with just over 6 minutes remaining in the third quarter against the visiting Alvark Tokyo on Thursday night, September 30.

The game was a little over halfway completed, but the final outcome was far from decided.

Ryukyu rallied from 15 down and held on for a 63-62 victory in the opening contest of the B. League’s sixth season at Okinawa Arena.

New Golden Kings coach Dai Oketani, began his second stint as the team’s coach with a dramatic victory. Oketani, who coached the B. League second division’s Sendai 89ers for the past three seasons, won a pair of bj-league championships during his first stint as Ryukyu bench boss from 2008-12.

The hosts pulled within 54-45 entering the final quarter, then embarked on a 14-0 spurt. It began with a Dwayne Evans inside jumper at the 9:03 mark. Naoki Tashiro sank a 3-pointer to cut the Alvark lead to 54-53, and Evans converted a fast-break layup to put the hosts ahead by one.

Tashiro closed out the run with an on-target shot from close range, giving his club a 59-54 lead with 4:00 showing on the scoreboard.

The Alvark cut it to 61-60 on a Genki Kojima 3-pointer with 2:22 remaining. But Ryukyu center Jack Cooley nailed a layup courtesy of a deft pass from veteran point guard Narito Namizato for a major highlight with 43 seconds left in the game. Trailing 63-60 at that moment, Alvark coach Luka Pavicevic called a timeout.

With a sense of urgency, Tokyo got the ball to offseason signee Sebastian Saiz, the B. League Finals MVP for the champion Chiba Jets last season. He calmly scored a layup and the Alvark were down by one, 63-62, with 36 seconds to play.

Neither team scored again in a game marked by tight defense and scoring struggles. Ryukyu shot 22-for-59 from the floor; Tokyo made 24 of 62 shots.

To their credit, the Golden Kings were relentless in pursuit of loose balls. They outrebounded the Alvark 46-33, including 13-7 on the offensive glass.

“I think it was a plus that we were able to demonstrate our strength in such a match,” Tashiro told reporters. “However, since it is still the first match, the team is still not complete, and I hope we move forward step by step…”

Oketani, who said he exhibited patience while guiding his club from the sideline, noted that he expects “there will be more games like today this season.

Communication helped ignite the Kings comeback, according to Oketani.

“As I entered the game, I started to concentrate, and the players were able to talk with each other even during difficult times, which led to a reversal,” he said.

“There are many new players, and players with individuality, so keep fighting calmly no matter what [is important],” he commented.

“It was an important opening game with mutual feelings,” said Pavicevic, who’s now in his fifth season at the helm, “and it was a very regrettable game for us to lose the close game by one point.”

The second game of the season-opening series is set for a 2 p.m. start on Saturday, October 2.

Reflecting on his return to the lineup after a seven-month absence due to a back injury, Kirk posted a message on Twitter. He wrote: “Wish we could have started out with a win, but happy to just be back playing again. It has been a long 7 months coming back from a second back surgery. Just want to say thank to everyone you helped me survive the summer and get back to the court.”