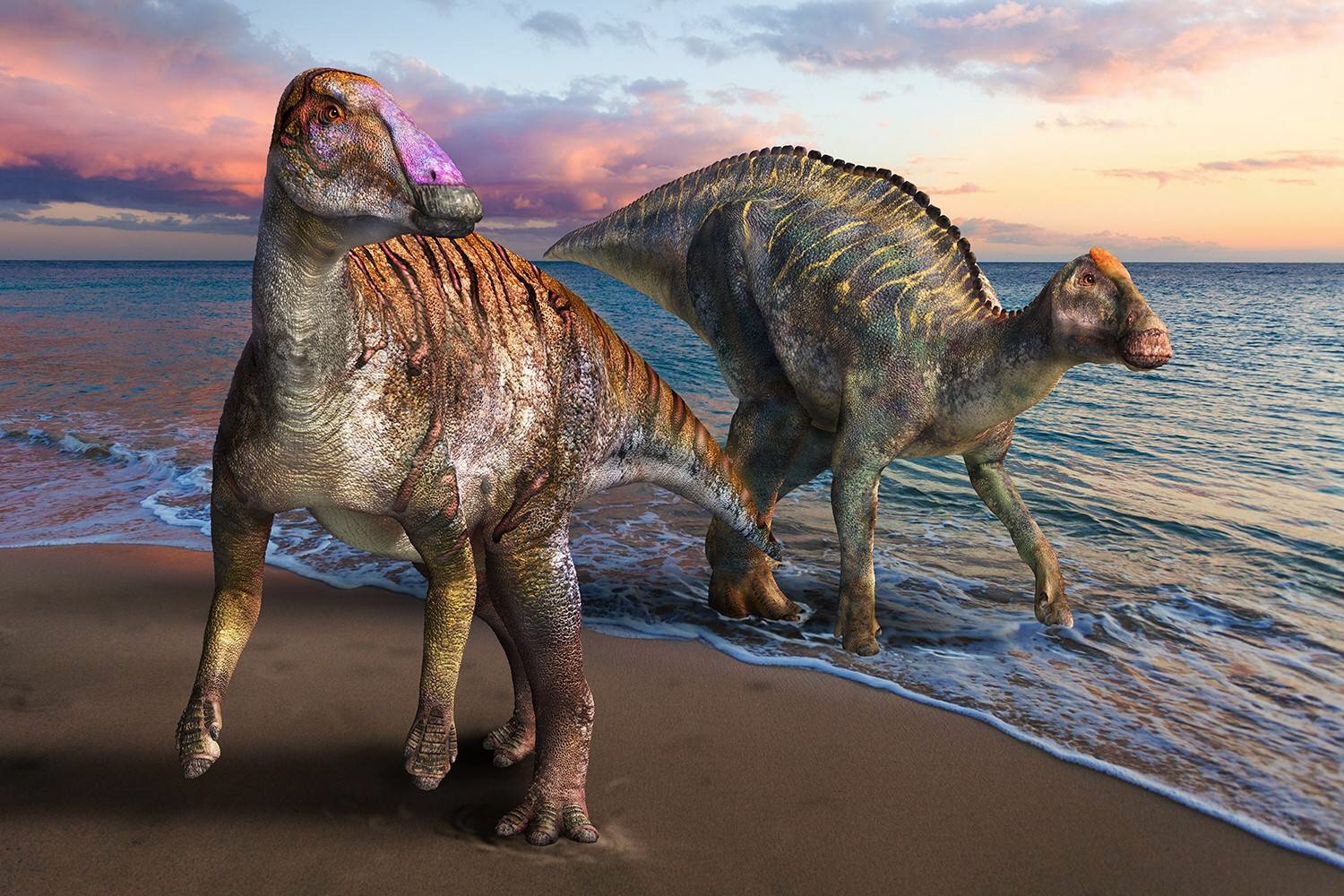 Japan’s “world of dinosaurs” is attracting attention. The Yamatosaurus species, found on the Awajishima Island in Hyogo Prefecture, is one example.

Studying this species led researchers to the major discovery that an evolutionary key for long-prospering dinosaurs lies in the coastal areas of East Asia, including Japan.

Furthermore, a slew of other discoveries is adding new insights to Japanese dinosaur research. What was the environment like, and what kind of creatures lived in Japan during the age when dinosaurs prospered in the region?

Let’s take a closer look at some of these mysteries.


A ‘Refugium’ Where Species Coexisted

Fossils found in Awajishima in 2004 were discovered to be a new genus and species of the Hadrosauridae family of herbivorous dinosaurs. In April 2021, these new dinosaurs were given the name “Yamatosaurus Izanagii.”

The discovery came in May 2004, when Shingo Kishimoto, 72, found fossils belonging to the new species, including parts of the lower jaw bone, in a stratum dating back about 72 million years at a site in the city of Sumoto in the southern part of the island. Kishimoto, who is from Himeji, Hyogo Prefecture, is also a representative of the Palaeontological Society of Hyogo.

According to a study conducted by the team at the Hyogo Prefecture Museum of Nature and Human Activities, the fossils were identified as belonging to a new genus and species of the Hadrosauridae family, based on the characteristics of the teeth and jaw formation. The dinosaurs are estimated to have been around 8 meters in body length and around 5 tons in weight.

Also called the “duck-billed dinosaur,” Hadrosauridae dinosaurs had flat duck-like beaks and were considered the most prosperous herbivorous dinosaurs during the Cretaceous Period. The Kamuysaurus fossil found in Mukawa City, Hokkaido, is from the same family.

The importance of the discovery lies in the fact that the Yamatosaurus was a primitive Hadrosauridae species. Its find is expected to help clarify the evolutionary process of the Hadrosauridae family, which emerged during the middle of the Cretaceous Period around 95 million years ago.

Compared to more advanced animals during the later Cretaceous Period, the Yamatosaurus had shoulder muscles that were less developed. This suggests that a shift from bipedalism to quadrupedalism occurred during the transition from primitive to advanced species.

In other words, changes in the walking style of the dinosaurs may have led to an expansion of their range, which in turn helped them diversify and prosper. The discovery points to the importance of East Asian coastal areas, including Japan, in analyzing the potential of this theory.

Fossils of Yamatosaurus were discovered in a stratum from 72 million years ago, suggesting that the East Asian coast, including Japan, was a “refugium” at the time. It was an area where early species were able to survive and coexist with more advanced species for 20 million to 30 million years without becoming extinct.

Researcher Katsuhiro Kubota (Vertebrate Paleontology) of the Hyogo Prefecture Museum of Nature and Human Activities says: “The significance of Japan’s dinosaurs was reaffirmed. We will unravel the evolution of dinosaurs from Japan’s unique perspective.”

Five eggshell fossils found at the Tetori Group located in Shokawacho, Takayama City, in Gifu Prefecture, were discovered to belong to the theropod (bipedal carnivorous dinosaurs) Troodontidae species. Research teams from the University of Tsukuba and other institutions made the announcement in July 2021. Found in stratum from the Early Cretaceous Period around 130 million years ago, they are believed to be the oldest dinosaur eggshell fossils in Japan.

The Troodontidae species are small to medium-sized feathered theropod dinosaurs that are similar to birds, but with large sickle-shaped claws on their hind feet. They emerged in Asia during the Early Cretaceous and were believed to have thrived in the Northern hemisphere.

The five eggshell fossils measure at a maximum length of 1.7 cm and 0.5 mm thick. A microscopic observation of the cross-section of the fossils revealed patterns characteristic of eggs of Troodontidae and other dinosaurs that are closely related to the family. Based on the shape of the fossils, the parent dinosaur is estimated to be around 1.5 meters in body length.

The Tetori Group refers to a strata from the Mid Jurassic to the Early Cretaceous of the Mesozoic Era (approximately 167 million to 110 million years ago) distributed across Gifu, Fukui, and Ishikawa prefectures. It is known worldwide as a region where many kinds of dinosaur fossils are excavated.

No bone fossils of Troodontidae have been found so far. Rina Uematsu, 22, a graduate student at the University of Tsukuba who conducted an analysis of the eggshell fossils, said: “It is a significant find. It shows the possibility of an unknown dinosaur in the Tetori Group.”

Local fossil enthusiasts have been discovering eggshell fossils since 1999. Initially it wasn’t possible to identify them as dinosaur fossils, said Shohei Kozu, 32, chief curator at the Gifu Prefectural Museum. He uncovered the fossils, which had been stored at a local government office for about 20 years. “We were able to reveal the paleontological significance of these small stored specimens,” he explained, “which, unlike fossils from a larger group, can often be overlooked.”

Researchers and the Kuji Amber Museum in Kuji City, Iwate Prefecture, announced in July 2021 that tooth fossils of four kinds of theropods from the late Cretaceous period dating back about 90 million years had been found in a stratum in the Tamagawa Formation in the Kuji Group. It was the first time in Japan that fossils of several kinds of theropods have been discovered in the same stratum or area.

The discovered tooth fossils belong to the Tyrannosaurus family. They include two kinds of Richardoestesia and Paronychodon dinosaurs, which are believed to have existed in North America. This was the first time fossils of these species have been found in Japan.

A variety of theropods, which sat at the top of the food chain are believed to have roamed the region. This suggests that at the time Japan had a rich ecosystem.

So far, about 2,200 vertebrate fossils of 30 types of dinosaurs have been found in the city of Kuji.