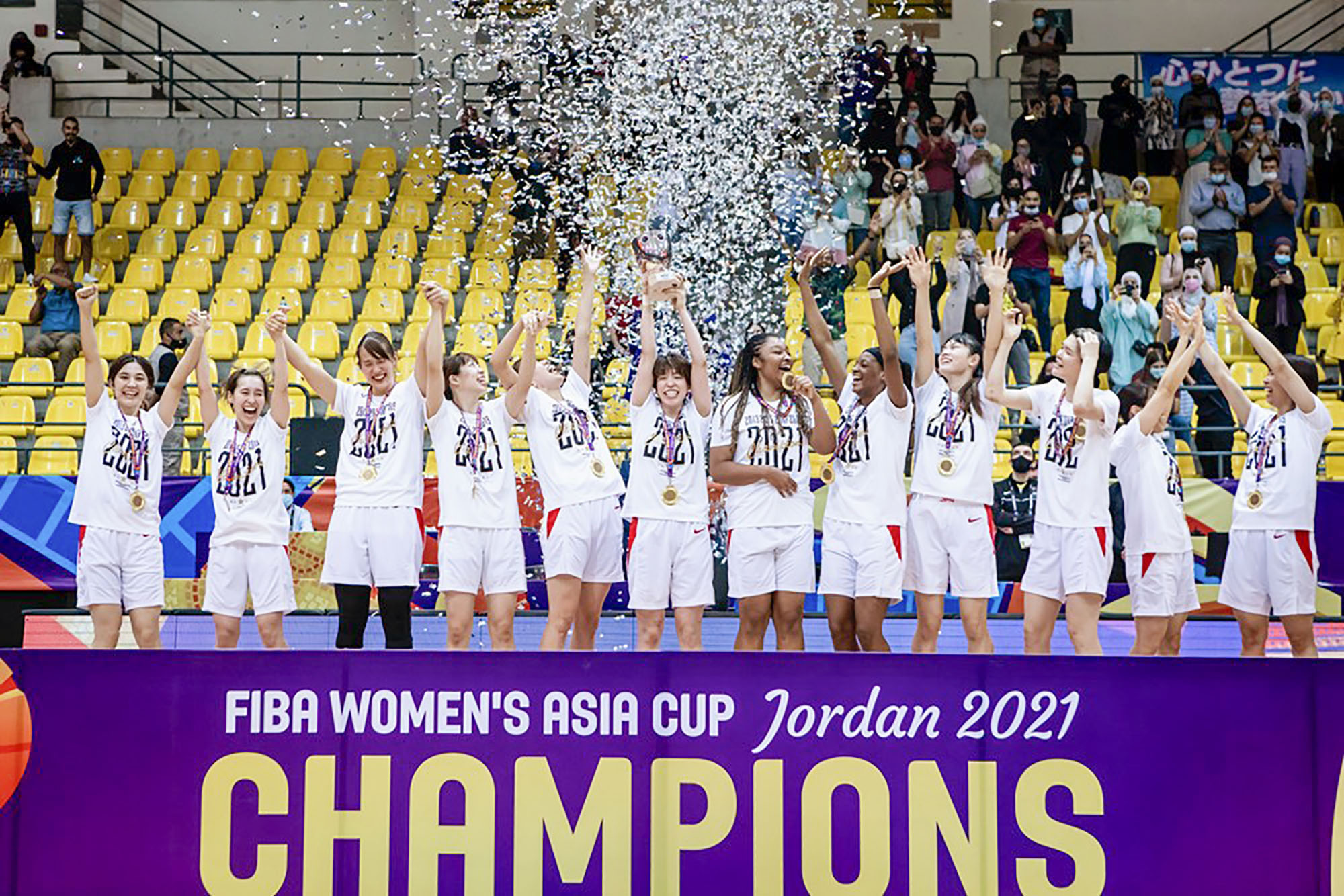 Several of the key players from Japan’s silver medal-winning women’s basketball team from the Tokyo Olympics did not participate in the FIBA Women’s Asia Cup.

But the squad that Japan brought to Amman, Jordan, rose to the occasion, capturing the continental title for the fifth straight time. In the final, guard Saori Miyazaki scored 26 points, handed out 11 assists, corralled seven rebounds and made two steals in Japan’s 78-73 win on Sunday night, October 3.

Miyazaki had five points in the Olympic final against the United States on August 8. Her Olympic teammates Rui Machida, Maki Takada, Nako Motohashi and Yuki Miyazawa were absent from Women’s Asia Cup competition, and several younger players had the opportunity to receive extended playing time under new head coach Toru Onzuka. He was promoted from assistant to bench boss last month to replace Tom Hovasse.

After China extended its lead to nine early in the final stanza, the Akatsuki Five erased the advantage with a 12-0 run to take command. Stephanie Mawuli initiated the scoring run after drawing a foul on a 3-point shot, then sank all three attempts with 9:11 left to play.

Fittingly, Miyazaki put the finishing touches on the victory. She scored the game’s final two points at the free-throw line with 3 seconds remaining.

Japan’s players enthusiastically celebrated their latest Women’s Asia Cup title, smiling, clapping, hugging one another and basking in the euphoric glow of another championship. This time, however, with Onzuka calling the shots.

“I am so glad that we won this and I want to show my respect to the coach and the staff who have had this team for such a short time,” said Miyazaki, who plays for the W. League’s Eneos Sunflowers.

“Players like Machida, Motohashi and [Asami] Yoshida have all been in the team and thanks to them, we are all becoming better point guards.

“I always have confidence in my own ability and skills.”

Mawuli had a 13-point effort and Mai Yamamoto and Saki Hayashi contributed six points apiece for Japan, which outscored China 26-16 in the fourth quarter.

Japan’s overall speed was showcased effectively on defense, particularly in forcing takeaways ー 10 steals to show for its effort.

“We lost this game but it was a wonderful game for the fans,” Xu commented. “Both teams showed our skills very well on the court. The score was up and down and this was great for a team that is still growing up.

“After Tokyo 2020 we didn’t bring some of our most experienced players but I think we have done a good job technically and with our preparation. Statistically we were better than Japan but they used our turnovers to get more points than us and it was an important detail.”

Miyazaki was No. 1 in assists in the tournament, averaging 9.6 in five games. She was named to the all-tournament team.

Analyzing Miyazaki’s tremendous performance in the final, Onzuka said: “Playing with a sense of dynamism led to an increase in scoring ability.”

Forward Himawari Akaho, who played a pivotal role in Japan’s semifinal victory over Australia on Saturday, October 2, was named Women’s Asia Cup MVP. The Olympian, who swatted a Sami Whitcomb 3-pointer on the final possession of the semifinal, was especially recognized for her defensive impact and veteran leadership. Japan escaped with a 67-65 victory.