BASKETBALL | Kawasaki Continues Push to the Top With Pulse-Rising Triumph 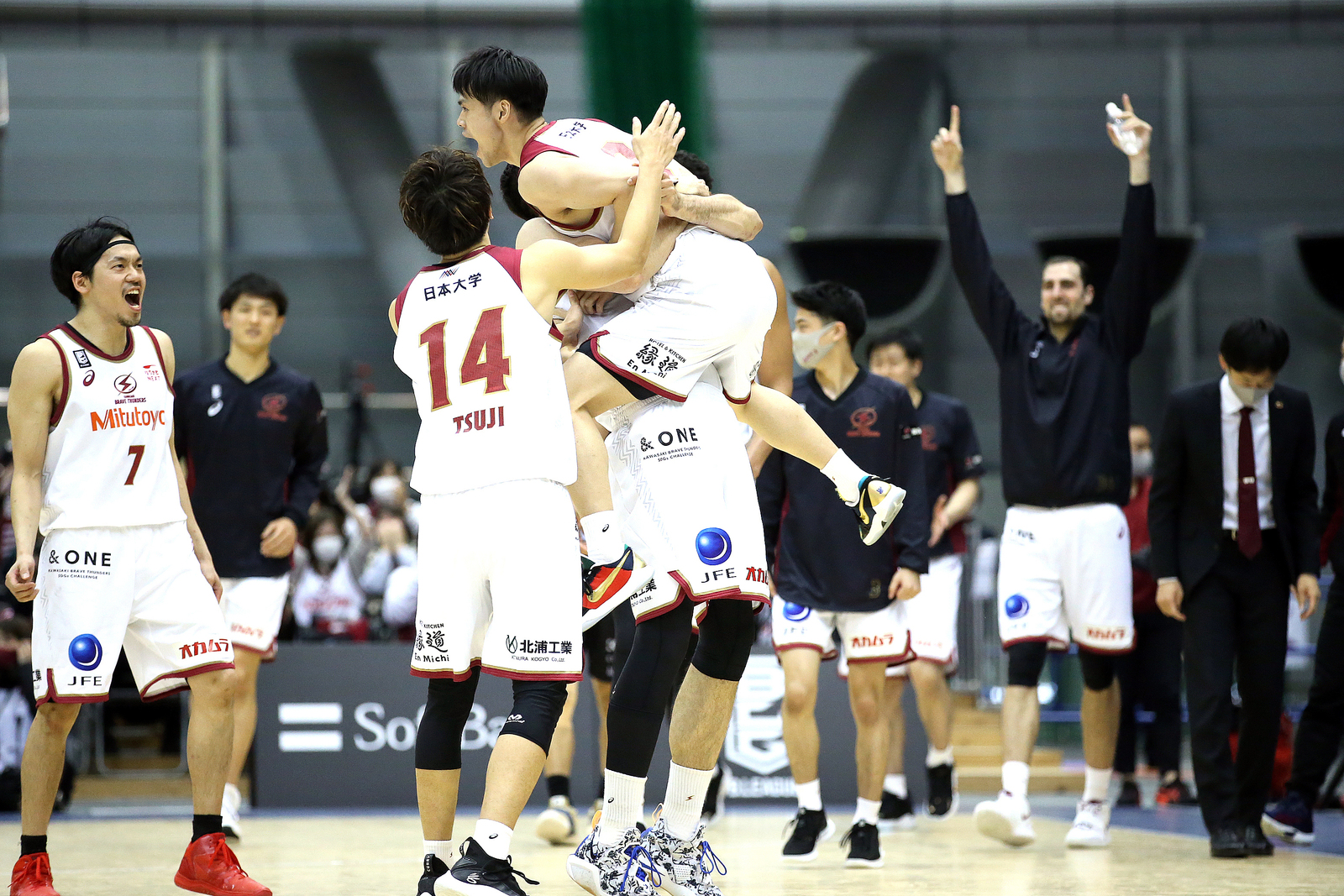 YOKOHAMA  ー A lot can happen in the final few seconds of a basketball game.

The final 4 seconds can change everything in a down-to-the-wire game.

Such was the case on Sunday, February 28 as the Yokohama B-Corsairs and Kawasaki Brave Thunders squared off for the second time in as many days in their B. League weekend series.

For the hosts, point guard Shusuke Ikuhara's gutsy 3-pointer deadlocked the score at 65-65 with 4 seconds to play.

The Brave Thunders called a timeout and head coach Kenji Sato drew a play to get the ball in the hands of veteran guard Yuma Fujii.

The plan worked to perfection. Uruguayan forward Mathias Calfani inbounded the ball, making a pinpoint bounce pass to Fujii, who immediately went to work with a mission to score. With his back to the basket, Fujii dribbled once, pivoted to his left, then seeing the defense collapsing around him decided to spin to his right, spotted up near the left baseline and released a high-arcing, step-back shot that splashed through the net with 0.7 seconds remaining.

Yokohama's Robert Carter heaved a desperation 3-pointer that was off target at the other end. Game over.

Brave Thunders players rushed to congratulate Fujii, who scored 16 points on the afternoon and provided three assists and two steals. Calfani lifted him up in the air in a display of pure euphoria.

The Brave Thunders (27-13) extended their winning streak to seven on a day when they struggled with their 3-point shooting (8-for-37), but outrebounded the hosts 43-30. Kawasaki used its rebounding strength to create additional scoring opportunities, which led to a 15-4 edge in second-chance points at Yokohama International Swimming Pool.

Brave Thunders small forward Naoya Kumagae said, "The last shot by Fujii was so wonderful that I had no choice but to laugh."

Kawasaki played the weekend series without veteran star Nick Fazekas, a naturalized Japanese citizen who injured his lower back (lumbar) during warm-up drills on Saturday, February 27. He is expected to be sidelined for 1-to-2 weeks.

Fazekas is the B. League first division's No. 3 scorer (20.1 points per game) and one of the most potent offensive weapons in league history.

"I am relieved that we were able to play basketball as a team and win in the presence of injured people," Kumagae commented.

Noting Fazekas' injury absence, Sato said that he was pleased the team earned two wins over the weekend.

"It is highly commendable that we were able to win two consecutive games in his absence and in the Kanagawa Derby we also had a good match where he could feel the real thrill of basketball with Fujii's shot at the end," Sato told reporters.

In the series opener against Yokohama, Kawasaki rolled to a 92-65 win.

A day later, B-Corsairs coach Kyle Milling said he wanted his team to play better defense and slow down the pace of the game a bit.

Yokohama built a 20-10 lead entering the second quarter and held a 30-28 edge at the intermission. But a strong third-quarter effort at both ends of the floor gave the visitors a big boost, and they took a 53-46 lead into the final stanza.

Speaking to reporters in an online news conference, Fujii, a 29-year-old Shimane Prefecture native who has played for the Brave Thunders since 2014, was asked about the dramatic sequence that decided the game.

He noted that the B-Corsairs had tightened up their interior defense in the rematch, but mentioned that he was determined to succeed in crunch time.

"It was good to be able to [take] the shot that decides the victory or defeat at the end," Fuji said. "I wasn't able to attack the opponent's zone defense very well, but even so, I was told to shoot aggressively during halftime, so I took the plunge and aimed for the shot."


Veteran center Jordan Heath had 19 points and 15 rebounds to spark the visitors, with Naoto Tsuji and Ryusei Shinoyama both scoring seven points.

The Brave Thunders now sit in third place in the East Division, looking up at the Chiba Jets (31-9) and Utsunomiya Brex (31-8) in the standings.

Since a 77-67 loss to Chiba on February 3, Kawasaki picked up a pair of victories over the visiting SeaHorses Mikawa (February 6-7), a midweek road win over Niigata Albirex BB on February 10 and an away sweep over the Levanga Hokkaido (February 13-14) before an off week.

The Brave Thunders, riding the longest winning streak in the B. League's first division, meet the Brex on Wednesday, March 3 at Todoroki Arena in Kawasaki before shifting their focus to a Saturday-Sunday series against the Albirex (12-27) at the same venue.

Led by a veteran nucleus, the Brave Thunders have one of the league's most efficient offenses. They are No. 1 in assists (22.9 per game) and fifth out of 20 teams in scoring (82.6 ppg). Their defensive pressure also causes fits for opponents; they are No. 3 in steals (8.0).

The Nishinomiya Storks have generated headlines with their current win streak, which reached 13 games on February 28.

The Storks edged the Kumamoto Volters 95-92 to extend the longest win streak in Japan pro hoops.

First-year German coach Mathias Fischer's club improved to 28-15, the best record in B2's West Division. (A season ago, when B2 had three geographical divisions, the Storks went 29-18 and finished second in the Central Division).

The Volters (20-23) suffered their sixth consecutive loss, putting them in fourth place in the West.

Storks captain Naoki Tani is averaging 7.5 points and 3.0 assists, while Noriaki Dohara has an 8.6 ppg average.

Another key contributor, power forward Matt Bonds, began his season with the Ballooners (eight games), moved to the Brave Thunders in November and played in 14 games for Kawsaki. Now, he has 22 games in the books for Nishinomiya and the numbers are indicative of productive performances week after week. The Saint Michael's (Vermont) College, an NCAA Division II alum is averaging 17.8 points, 9.4 rebounds, 1.7 assists and 1.2 steals.

Nishinomiya plays host to the Ibaraki Robots (29-12) on Saturday and Sunday, March 6-7.