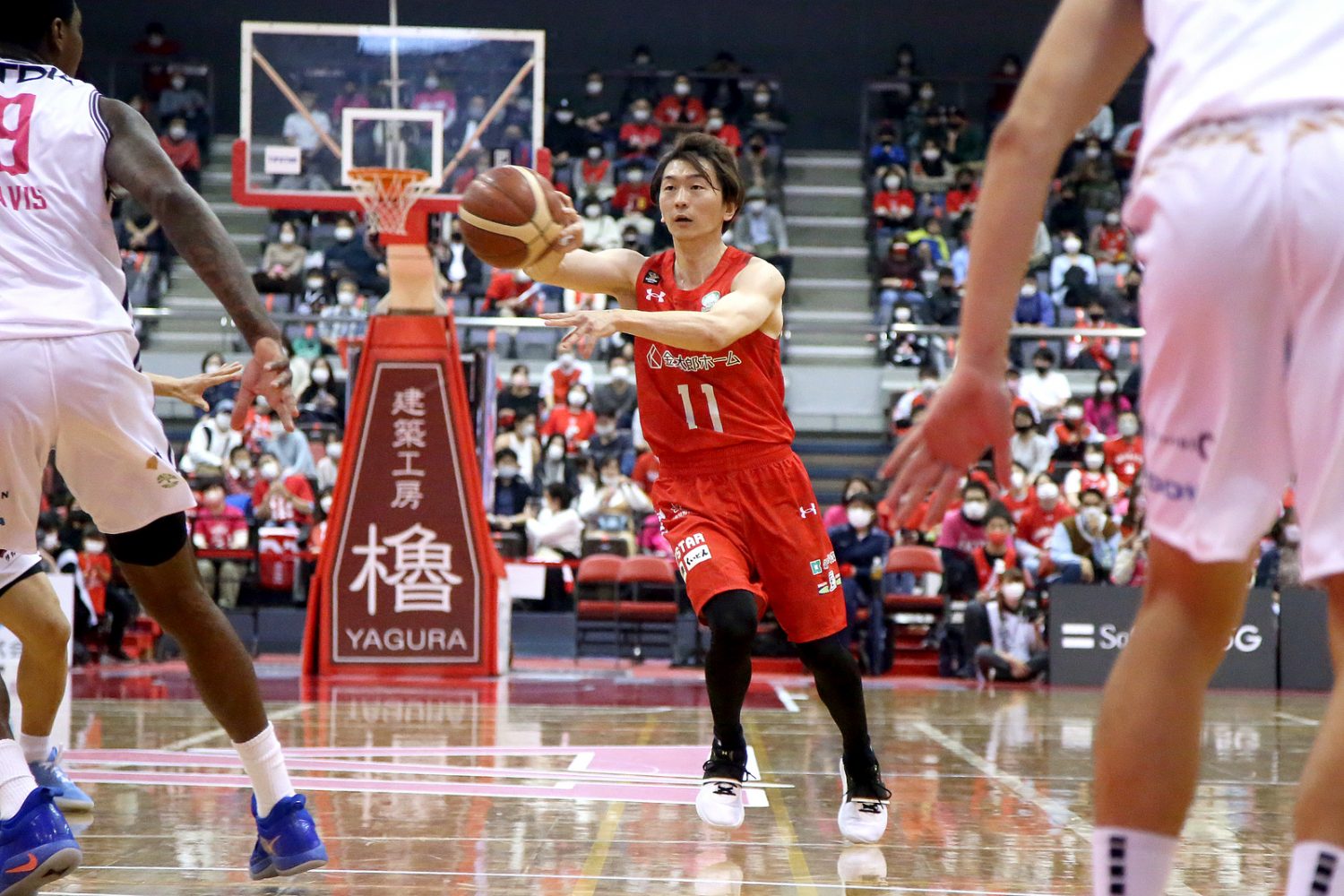 Chiba Jets guard Fumio Nishimura in action against the Akita Northern Happinets on October 17 at Funabashi Arena. (B. LEAGUE)

With three weeks of games completed, parity is a defining trait of the B. League's new season.

Only two teams ー the Ibaraki Robots and Toyama Grouses ー are winless through Sunday, October 17.

The reigning champion Chiba Jets, Shiga Lakestars and Hiroshima Dragonflies are tied for the best record (5-1) in the 22-team B. League first division, aka B1.

The Alvark Tokyo, winners of four straight, are one of six teams with 4-2 records. The others: Kawasaki Brave Thunders, Sunrockers Shibuya, SeaHorses Mikawa, Ryukyu Golden Kings and Shimane Susanoo Magic.

Newcomers and veteran mainstays played a pivotal role in the Jets' latest win.

Swingman Christopher Smith, a Utah State alum who joined Chiba in the offseason, scored 14 of his team-high 18 points in the fourth quarter. He sank 4 of 5 shots in the fourth. He handed out five assists in the series finale. Fellow newcomer John Mooney, who completed his college career at the University of Notre Dame in 2020, finished with 12 points, 12 rebounds, three assists and three steals.

Mooney averaged 16.9 points and 11.4 rebounds as a rookie for the NBL Australia's Perth Wildcats last season.

The Jets seized control in the fourth quarter, outscoring the Northern Happinets (3-3) 28-10. A 17-0 scoring run fueled their fourth-quarter domination.

"It was not good that the opponent took the rhythm [from our] turnovers,” Ono told reporters after the game. “However, I think that we had a common understanding and widened the point difference in the second half.”

Chiba also dominated on the boards (43-26 rebounding edge) and held a 44-16 advantage on points in the paint.

The Dragonflies are first in rebounding, averaging 43.3 per game.

In Tachikawa, the Alvark extended their winning streak with an 86-74 triumph over the Brave Warriors on October 17.

Okada, averaging 17.7 ppg, had his fifth consecutive game with 10 or more points.

In Kyoto, Shiga controlled the third quarter en route to a 95-72 victory over the Kyoto Hannaryz.

The Lakestars, guided by first-year bench boss Luis Guil, held the hosts to 10 third-quarter points while putting 28 on the board.

Sean O'Mara paced Shiga with 22 points on 10-for-15 shooting and 15 rebounds and Justin Harper had 20 points.

Lakestars sharpshooter Reon Shibuta added 15 points, including 3-for-3 on 3-point attempts, after scoring a combined four points in his first four games of the current B. League season.

This week's B1 schedule tips off with one series opener, Niigata vs. Mikawa on Friday, October 22.

The other 20 top-flight teams begin their weekend sets on Saturday, October 23. The matchups: Ibaraki vs. San-en, Yokohama vs. Shimane, Nagoya vs. Shiga, Hiroshima vs. Kyoto, Chiba vs. Tokyo, Osaka vs. Shinshu, Niigata vs. Mikawa, Akita vs. Gunma, Toyama vs. Ryukyu and Shibuya vs. Utsunomiya.

The Fighting Eagles Nagoya have set the early pace as the best team in the second division, winning five of their first six games.

Earthfriends Tokyo Z have the worst record (0-6) in the second division.

Takuya Kawamura, one of the premier Japanese scorers in the pre-B. League era, reached a career milestone on October 16. The 35-year-old shooting guard scored his 9,000th career point in the Storks' 100-85 road victory over the Ehime Orange Vikings in a B2 game.

Kawamura, who suited up for the men's national team at the 2006 FIBA World Basketball Championship in Japan, finished with 15 points on 6-for-6 shooting, including 3-of-3 from beyond the arc.

Jordache Mavunga made his B. League debut on October 16 with 14 points, seven rebounds and three assists in 19-plus productive minutes, helping the visiting Bambitious Nara defeat the Aomori Wat's 90-79.

If his family name looks familiar, it should. Jordache's older brother, Toyama Grouses floor leader Julian Mavunga, 31, is one of the premier players in B. League history.

The younger Mavunga, a 24-year-old, 193-cm shooting guard, wrapped up his college career at the University of Indianapolis in 2020.

Gunma small forward Trey McKinney-Jones is the leading scorer in B1 (24.3 ppg), followed by Osaka swingman D.J. Newbill (22.3) and Akita forward Jordan Glynn (21.7). Glynn boosted his average with 32 points against the Jets on Sunday.

Ryukyu big man Jack Cooley is the No. 1 rebounder (12.2), and Utsunomiya's Josh Scott and Shibuya's Josh Harrellson are both averaging 11.0.

Kyoto playmaker Tatsuya Suzuki is first in assists (8.2). The savvy passer dished out 16 assists with zero turnovers against Shiga on October 16.

Togashi is second in the passing department (6.8), followed by McKinney-Jones and Shimane's Seiya Ando, formerly with the Alvark, who are both averaging 6.5.