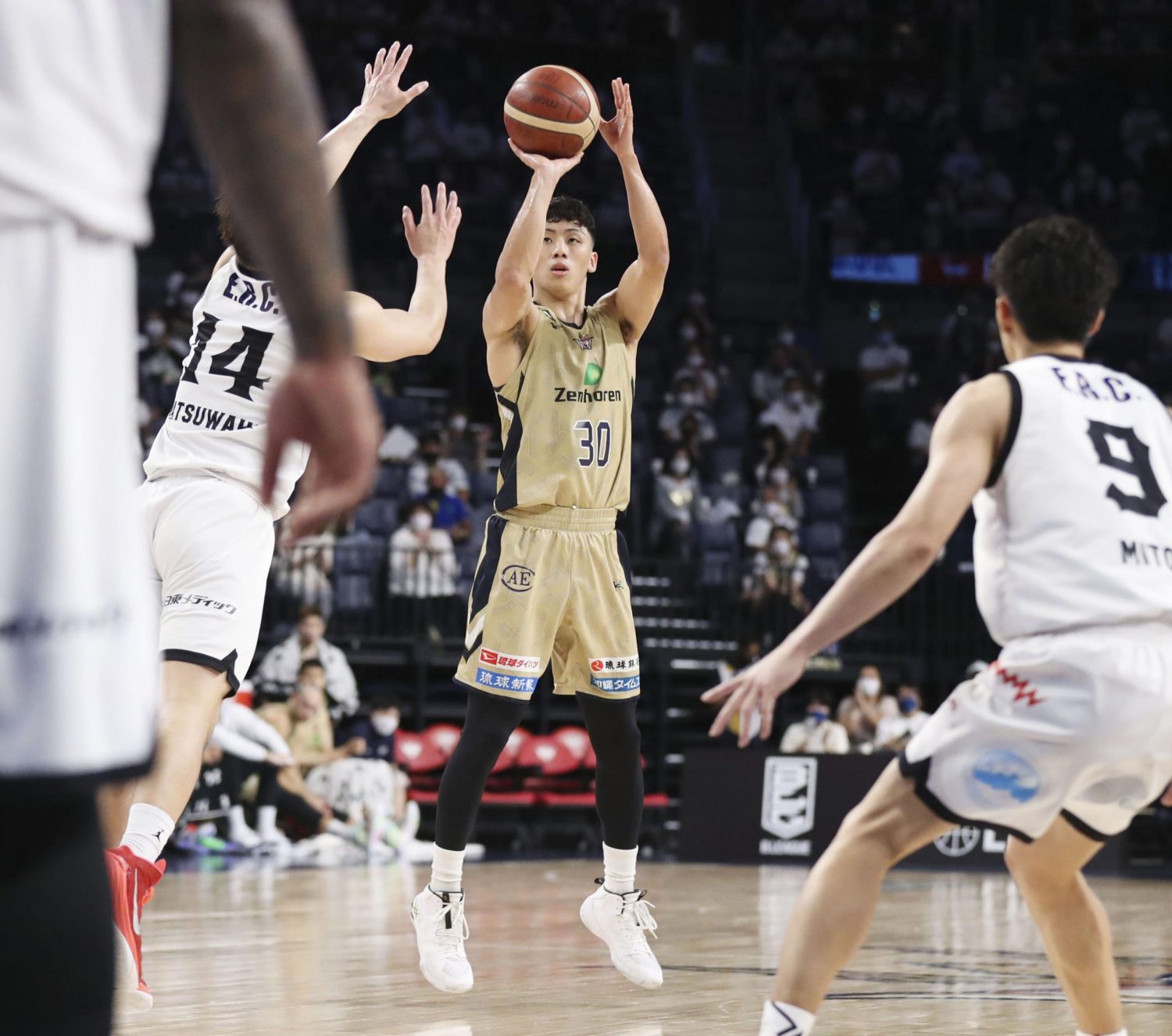 Ryukyu Golden Kings swingman Keita Imamura provided a big offensive boost in the first round of the B. League playoffs against the Toyama Grouses. (B. League)

Veteran standouts dot the rosters of the Ryukyu Golden Kings and Toyama Grouses. But it’s not always the most well-known players who provide game-changing contributions.

Such was the case from May 15-17 in their B. League first-round playoff series at Okinawa Arena.

For the victorious Golden Kings, who defeated the Grouses 86-77 in Game 3 on Monday, May 17, the noteworthy performance of swingman Keita Imamura can’t be overstated. In fact, he was instrumental in both of the team’s hard-earned victories in the series.

In Game 1, he scored a season-high 27 points in 28-plus pulsating minutes off the bench, knocking down 5 of 10 3-point attempts and finishing 11-for-17 from the floor. He also grabbed five rebounds and made two steals. American forward Dwayne Evans led Ryukyu with 34 points on 12-for-15 shooting in a 92-75 triumph.

Toyama rebounded with a 97-74 victory in Game 2. Imamura was held to nine points.

But in Game 3 Imamura had another 27-point performance, this time converting 7 of 17 3-point shots as the hosts ended Toyama’s season. He led the team in scoring in the must-win game.

The Niigata Prefecture native averaged 9.8 points per game during the 2020-21 B. League season. He appeared in 56 games, making 21 starts. He started on May 9 in the Golden Kings’ regular-season finale, his first start since January 3. His previous season-high point total was 22 on October 24 against the Shimane Susanoo Magic

When the playoffs opened up last weekend, the 25-year-old was called upon to provide a spark off the bench for a team that won 40 of 56 games in the regular season and captured the Western Conference crown.

After Ryukyu’s Game 1 win, Imamura said he was pleased with his performance and the team’s overall collective effort.

Reflecting on his big offensive outburst in a high-pressure game, Imamura said, “It was a different atmosphere than usual, but I think that what I have accumulated so far [this season] has come out as a good result.”

In the series finale against the Grouses, Imamura canned a buzzer-beating 3-pointer to end the first quarter, giving the hosts a 22-20 lead. He had 11 points in the opening quarter in a tone-setting offensive performance for a team that often relies on Evans, center Jack Cooley and other veterans, including Ryuichi Kishimoto, Naoki Tashiro and Narito Namizato, to make things happen on offense.

Imamura had 19 points in the opening half.

Looking ahead to the playoff semifinals ー the Golden Kings play host to the Chiba in Game 1 on Saturday, May 22 ー Imamura said he hopes to continue to play a big role for the hosts.

“In the semifinal matchup against Chiba, I would like to continue to shoot aggressively and play aggressively so that I can attack the rim firmly and give energy to the team,” Imamura told reporters moments after his team eliminated the Grouses.

(The other playoff semifinal showdown pits the Eastern Conference champion Utsunomiya Brex against the Kawasaki Brave Thunders. The Brex defeated the Brave Thunders 68-65 in Game 1 on Friday, May 21. Kawasaki trailed 42-30 at halftime. Makoto Hiejima led the hosts with 13 points, while Ryan Rossiter had eight points, 11 rebounds, 11 assists and three steals and Josh Scott contributed 18 points, nine boards and three steals. Jeff Gibbs also grabbed nine rebounds, helping the Brex outrebound the Brave Thunders 45-34. Nick Fazekas paced Kawasaki with 23 points and 11 rebounds and Ryusei Shinoyama scored 12 points. Game 2 is on May 22, with Game 3 penciled in on May 24.)

Imamura’s Growth as a Player

A season ago, Imamura established himself as a dependable role player for the Niigata Albirex BB, averaging 10.9 points in 39 games. He scored a season-best 27 points against the Alvark Tokyo on February 16, 2020, and also had a pair of 26-point efforts.

The title-chasing Golden Kings signed Imamura during the offseason.

“I chose Okinawa, which has a special environment, because I felt that it was an environment where I could aim for higher heights as a basketball player, so I decided to come [here],” Imamura was quoted as saying in an interview posted on the Golden Kings website last August.

Longtime Ryukyu assistant coach Keith Richardson believes Imamura’s play during the 2019-20 season was an important stepping stone for him.

“What I saw in Keita really started last season while he was in Niigata, and I’ve watched him grow as a player this season,” Richardson told JAPAN Forward this week. “I felt in the right environment and with the right team he could and will become one of the best shooters/scorers in Japan.”

The 191-cm Imamura has a quick release on his shot. Strong footwork and good agility are noticeable attributes, too.

The Golden Kings recognize that Imamura has the skills to be a consistent scoring threat, according to Richardson.

“The team and his teammates help put him in the right situations on the floor for him to get good looks at the basket and he knocks them down,” Richardson said. “This has just increased his confidence in himself because his teammates trust him to make those shots.”

Trust from teammates breeds confidence, and Imamura is determined to become a better player.

“What’s really impressed me is watching him work on the more difficult shots like the floaters and the mid-range game because I think he knows he can’t be one-dimensional as a scorer,” Richardson observed.

The veteran coach noted that NBA superstar Steph Curry, who’s known for his great 3-point shooting ability, doesn’t only set up shop behind the arc. Instead, the Golden State Warriors icon keeps the defense guessing by utilizing a wide range of other well-crafted shots.

“When we watch Steph Curry play, his other abilities to score besides just shooting the catch-and-shoot 3, like making floaters, mid-range jumpers and even attacking the basket [are on display],” Richardson stated. “Keita has those characteristics that he is putting into his game.”

Indeed, that’s a sign of Imamura’s growth and maturation as a player.