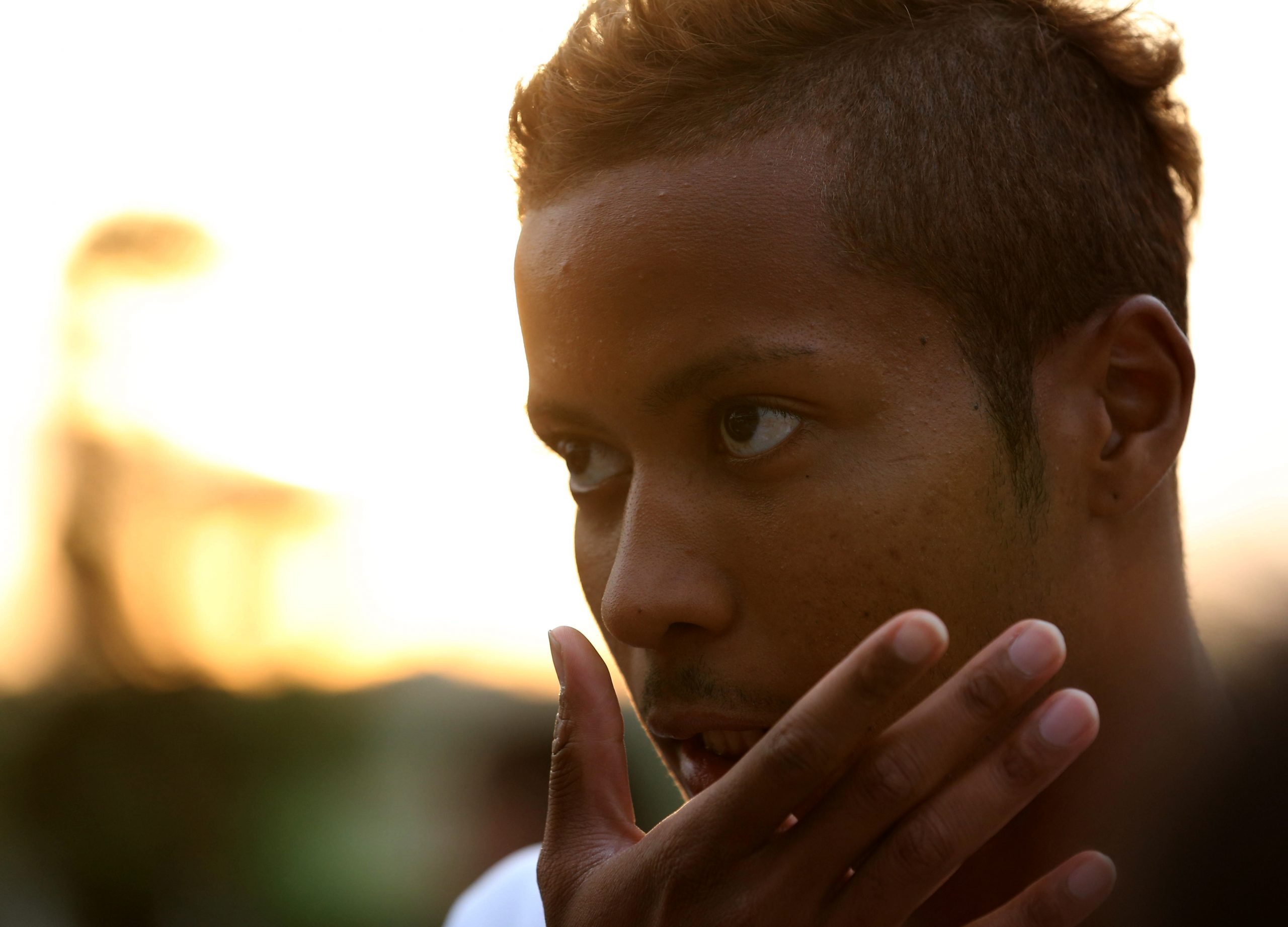 He wears the number 10 jersey for Belgian Pro League team Beerschot and plays for the Japan national side. He is Musashi Suzuki.

An injury ruled out Suzuki from representing Japan in recent matches against South Korea and Mongolia, but he is featuring more and more in Moriyasu’s Japan team.

Suzuki, who was born in Jamaica and raised in Otashi city in Gunma Prefecture, Japan, regards the national team as a special place. But the talented soccer player was bullied at elementary school and still receives abusive messages. In this searingly frank account, Suzuki opens up about his life so far.

This article is the beginning of a two-part series that has been compiled for JAPAN Forward using extracts from the book Musashi and Musashi (Tokuma Shoten Publishing, 2021), and an article in the sports magazine NumberWeb.

When I was in the first grade of elementary school, and everyone was still innocent, we all played together without really thinking about anything. But things started to change when I reached the third grade.

“Hey everyone, let’s play!” I said one day to my classmates. To my surprise, I received the following reply.

I was shocked. My friends, who had played with me cheerfully up until that point, were suddenly very cold toward me.

“Why not? Have I done something wrong?” I asked.

From that day on, the kids around me had a frosty attitude. At break times and after school, nobody came near me.

At first, I didn’t know who they were talking about.

“You. We’re talking about you. You’re the only person who’s the same color as a hamburger. Actually, not so much a hamburger … more a turd!”

I felt like I’d been hit repeatedly with a bunch of stones.

I looked up and saw one of my classmates pointing at me.

“I don’t want to play with you because you’re dirty.”

I was furious. “Stop messing around!”

I instinctively pounced on him. The class became awash with noise, and later, our teacher broke up the fight.

I didn’t agree with the teacher’s statement but at least it calmed the situation down. Yet from that day on, my classmates distanced themselves further from me – which was something that really annoyed me.

“You’re not so much a hamburger but a huge frying pan.”

“Woah, black. You’re so black I thought you were the blackboard.”

I was bombarded with insensitive comments.

They Wouldn’t Pass Me the Ball

At the same time, I was also bullied by my soccer teammates.

I started playing soccer when a friend invited me to join a club at a nearby elementary school, when I was in second grade. At the time, I wasn’t that interested in soccer.

I’d casually kicked the odd drink carton or ran around on the beach in Jamaica, but that was about it. So, when I got to Japan, I thought that any form of exercise would be enough. If my first invite had been to play baseball, I might have ended up playing baseball and the same would’ve applied to basketball.

Anyway, I started playing soccer seriously. However, I soon found myself being ignored by both my school friends and soccer teammates. They wouldn’t pass me the ball and I was insulted because of the color of my skin.

Initially, I didn’t know why this was happening. It was very painful. Sometimes I stood up to the bullies. But the more I fought back, the more they bullied me.

Eventually, I thought to myself: “If I keep standing up to them, my situation will just get worse. I will be quiet instead. If I do this, they will eventually get bored.”

I concluded that there was nothing to be gained by fighting and arguing. It would only worsen my case. I decided to stay silent no matter what they said to me.

Going to the Barber Shop with My Grandfather

To add insult to injury, there were also some shocking incidents outside of school.

Around the time the bullying started at school, I went to the local barber shop with my grandfather. In Jamaica, a housekeeper called Hazel used to cut my hair. After moving to Japan, my grandfather initially performed this task, but then one day he took me to the barber shop for the first time.

The place was a small store run by an individual owner. I went in nervously holding my grandfather’s hand and sat down in front of a large mirror, before having a white towel draped over my body.

As I sat down and looked at the mirror, my black face looked as though it was floating above the white towel.

It was the black face that everyone had teased. I disliked looking at it in the mirror so I closed my eyes. A little later, the store owner said a few words to my grandfather.

“This kid’s hair is all over the place. There’s so much of it. This is going to cost extra.”

My whole world went dark. The barber’s words cut deep into my soul.

“I’m not worried about the price. Please just cut his hair,” my grandfather said.

“What style should I go for?” asked the owner.

“Just make it all short,” replied my grandfather.

I found the conversation painful. The barber started to cut my hair but my soul felt crushed.

I put extra strength into my closed eyes. I straightened my back and clenched my fists underneath the white towel.

My Grandfather Cut My Hair Again After That

“It’s my fault, it’s all my fault. The fact I’m different to everyone else means this owner and my grandfather are in difficult positions.”

As the barber cut my hair, I continued to put strength into my entire body. My palms were sweating. All I could think about was disappearing from the barber shop. I couldn’t look at the mirror.

“I’ve finished. What do you think?”

I said “thank you” without looking at the mirror and ran over to my grandfather. As my grandfather paid, I stood behind him with my soul still crushed.

“I never want my haircut in public again.”

My grandfather probably realized I was upset, and so from that day on, he cut my hair, until I graduated from junior high school.

I looked at the mirror every morning and there I was. My appearance never changed. My skin color was different than that of my mother, grandfather, and grandmother. My younger brother and I were black, but the other three were white. I never regarded their skin color as being strange, because their presence had been part of my everyday life for many years. They looked like many other people in Japan. But I was seen as being “different.”

Getting Hold of Baby Powder

As far as I was concerned, my life in Japan was not particularly different than that in Jamaica. Of course, the culture and scenery are not the same, but I was still me.

Yet, I started to doubt myself after the negative comments and the way people viewed me, which is something that never happened in Jamaica.

“I’m no good because I’m black. If I become white, I won’t have to endure all the negative comments and looks. I want to become white. How can I do this?”

I thought hard. “Why do I look different to everyone else?” Yet no matter how intensely I thought, I couldn’t find an answer.

In the end, I decided to cover my entire body with baby powder.

But of course, after I washed off the baby powder in the shower, the water on the floor whitened yet my face in the mirror was still black. I felt a sense of despair. My face was exactly the same.

The following evening, I thought to myself: “If I keep doing this, then maybe it will work.” I decided to cover my entire body with baby powder again.

My mother had always been positive about my natural skin color.

“Mom, you’re wrong. You might like my skin color but there are some people I know who don’t. People think I’m strange and I hate that.”

(Find Musashi Suzuki’s book on which these excerpts are based at this link, and the related magazine article in Japanese on the website for the sports magazine NumberWeb, at this link.)