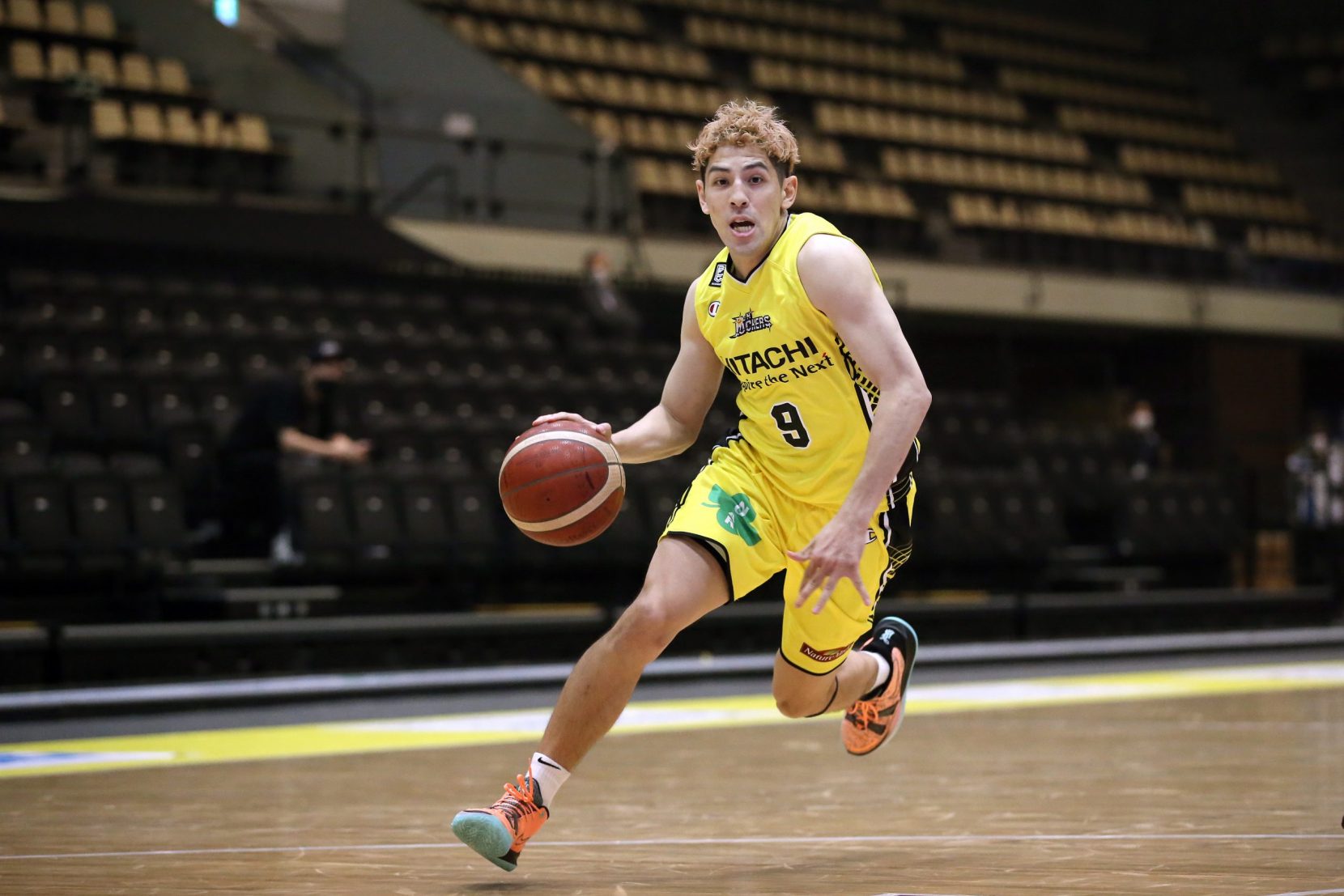 A day later, the new state of emergency began in Tokyo and three other prefectures (Kyoto, Osaka and Hyogo). So the Sunrockers went from playing before a modest crowd in the weekend opener, which they won 92-64, to facing the Levanga in the rematch behind closed doors.

The Sunrockers would've certainly enjoyed the enthusiastic applause that their fans provide for them at home games. But on this day, the start of another state of emergency began just 21 hours after the weekend opener. For both teams, getting rest on Saturday night and preparing for their rematch clearly occupied their time.

Sure, a crowd would've been nice at a gym that seats about 2,500 (and the league permits up to 50% of venue capacity to be filled this season). But both teams' focus wasn't on what was decided by others.

The Sunrockers dominated for large stretches of the game and cruised past the Levanga 98-83. It was Shibuya's final home game of the B. League season.

The state of emergency is scheduled until May 11 in an attempt to limit the spread of COVID-19 during Golden Week.

A large portion of the upper-level section of seats behind the team benches were decorated with pictures of Sunrockers team mascot Sundy and different messages of support for the players.

Shibuya (38-19), on the other hand, demonstrated hard-nosed defense in winning the opener by 28 points, a game in which coach Tsutomu Isa's club outscored the visitors 58-33 in the second and third quarters.

Sunrockers Captain Leo Vendrame dished out a game-high 11 assists on Saturday. He handed out nine more assists the next day, setting the tone on offense and helping his club extend its winning streak to five games.

Former NBA forward Ryan Kelly paced Shibuya with 19 points along with eight rebounds, six assists and two steals, while Kosuke Ishii canned 5 of 7 3-pointers in a 17-point performance. Charles Jackson finished with 17 points and seven boards, Kohei Sekino sank all three of his long-range shots in a nine-point afternoon.

Sunrockers backup forward James Michael McAdoo, whose father Ronnie is a second cousin of NBA Hall of Famer Bob McAdoo, sparked his club with 14 points, four rebounds and a steal in 18-plus productive minutes. The University of North Carolina alum played for the Golden State Warriors (2014-17) and appeared in three games with the Philadelphia 76ers the next season.

Ishii got into a comfortable shooting rhythm. He also moved without the ball  and his teammates delivered the ball to him with crisp passes at opportune times.

Ishii noted that this aspect of the game worked well for the Shibuya offense.

"I thought that I could hit shots if I moved to the open space, so my teammates found the place where I moved and provided passes, which led to good shots," Ishii told reporters after the game.

With a strong effort against Hokkaido, Shibuya completed the home portion of its schedule, earning 22 wins against eight defeats. Ishii said this is a big achievement. "It was good that we won with a high winning percentage in terms of protecting the home court," he commented.

The Sunrockers led 48-37 at halftime.

The Levanga cut the lead to 58-54 on a Tajima 3-pointer with 3:19 remaining in the third quarter.

Tajima nailed a trio of free throws for the final points of the third quarter, and his team trailed 66-58 entering the final period.

Vendrame sank a jumper and Ishii quickly followed with a 3-pointer from the left wing to stretch the scoring advantage to 71-58 after just 43 seconds of the fourth.

The lead ballooned to 23 on a pair of McAdoo free throws with 3:57 remaining.

One key for the Sunrockers was the fact that they didn't rely on one player to carry the offense.

Vendrame admitted the different atmosphere at the two games wasn't ordinary. But he was pleased with his team's effort.

"We had good performances in the games," said Vendrame, one of 32 candidates to represent Team Japan in the Olympic men's basketball tournament this summer.

With Kelly and Jackson leading the inside effort, Shibuya outrebounded Hokkaido 38-25, which directly impacted its sizable advantage in second-chance points (22-6).

While the Sunrockers are atop the wild-card standings with a playoff berth all but assured, Isa said that the team must focus on finding ways to keep improving as it pursues victories in upcoming games.

Shibuya has three games remaining before the playoffs start in May.

In Hiroshima, Shiga star Jordan Hamilton's 20-point, 10-rebound effort helped carry his team to an 82-75 win over the hosts.

Rookie guard Isaiah Murphy, who was born in Okinawa, led the Dragonflies (7-44) with 20 points and Gregory Echenique had 18 points and 11 rebounds. Thomas Kennedy and Shogo Asayama scored 15 and 10 points, respectively.

Shiga earned an 88-80 triumph in the series opener.

In Utsunomiya, Tochigi Prefecture, Kawasaki capitalized on the 10 steals that its defense made in the series finale and handed the hosts a 75-67 loss.

L.J. Peak had 13 points and Yusuke Endo and Ryan Rossiter both scored 12 for Utsunomiya (47-11). Rossiter also grabbed a game-high 14 rebounds.

In Nagaoka, Niigata Prefecture, center Joshua Smith put his stamp on the game with 32 points and 16 rebounds and Julian Mavunga notched his seventh triple-double of the season as Toyama earned a bounce-back victory, routing the hosts 104-83.

Mavunga finished with 28 points, 16 rebounds and 11 assists. Teammate Yuta Okada poured in 14 points and Tomokazu Abe netted 11 for the Grouses (37-21), who are on the verge of clinching the second wild-card spot.

In Chiba, Shannon Shorter led the Jets with 20 points and Yuki Togashi scored 13 as the hosts topped Yokohama 70-63.

Reginald Becton finished with 19 points and seven rebounds for the B-Corsairs (16-39).

On Saturday, the Jets recorded a 91-83 victory.

Perhaps the biggest headline performance of the day, though, belonged to Evessa rookie small forward Ryogo Sumino, a Kanagawa Prefecture native, who was 6-for-6 from the field (including 5 of 5 on 3-point shots) and 4-for-4 at the foul line for a career-best 21 points.

Sumino wrapped up his college career at Southern New Hampshire University in 2020. He appeared in 90 games (16 starts) for the NCAA Division II school in his four years there.

Osaka trailed 46-39 entering the third quarter, but coach Kensaku Tennichi's team dominated in the second half to secure the win.

In Kariya, Aichi Prefecture, Shimane seized control of the game in the decisive second quarter and held on for its sixth consecutive victory, beating Mikawa 94-86.

Shimane outscored the hosts 32-18 in the second quarter and took a 52-39 lead into halftime.

Kosuke Kanamaru had 22 points for Mikawa. Avi Koki Schafer also scored 22 and pulled down seven rebounds. Ko Kumagai chipped in with 17 points, while Kyle Collinsworth had 15 points and 12 assists.

In the weekend opener, Shimane handed Mikawa a 106-102 loss.

In Tachikawa, Tokyo drained 15 of 26 shots from beyond the 3-point arc and defeated Akita 93-75 to complete a series sweep.

Deshaun Thomas scored a team-high 19 points and Taiki Osakabe had 18, including 5-for-6 on 3s, for the Alvark (32-20). Seiya Ando added 16 points and Kevin Jones finished with 10 points and seven rebounds.

Tokyo helped its cause at the free-throw line, making 14 of 16 shots.