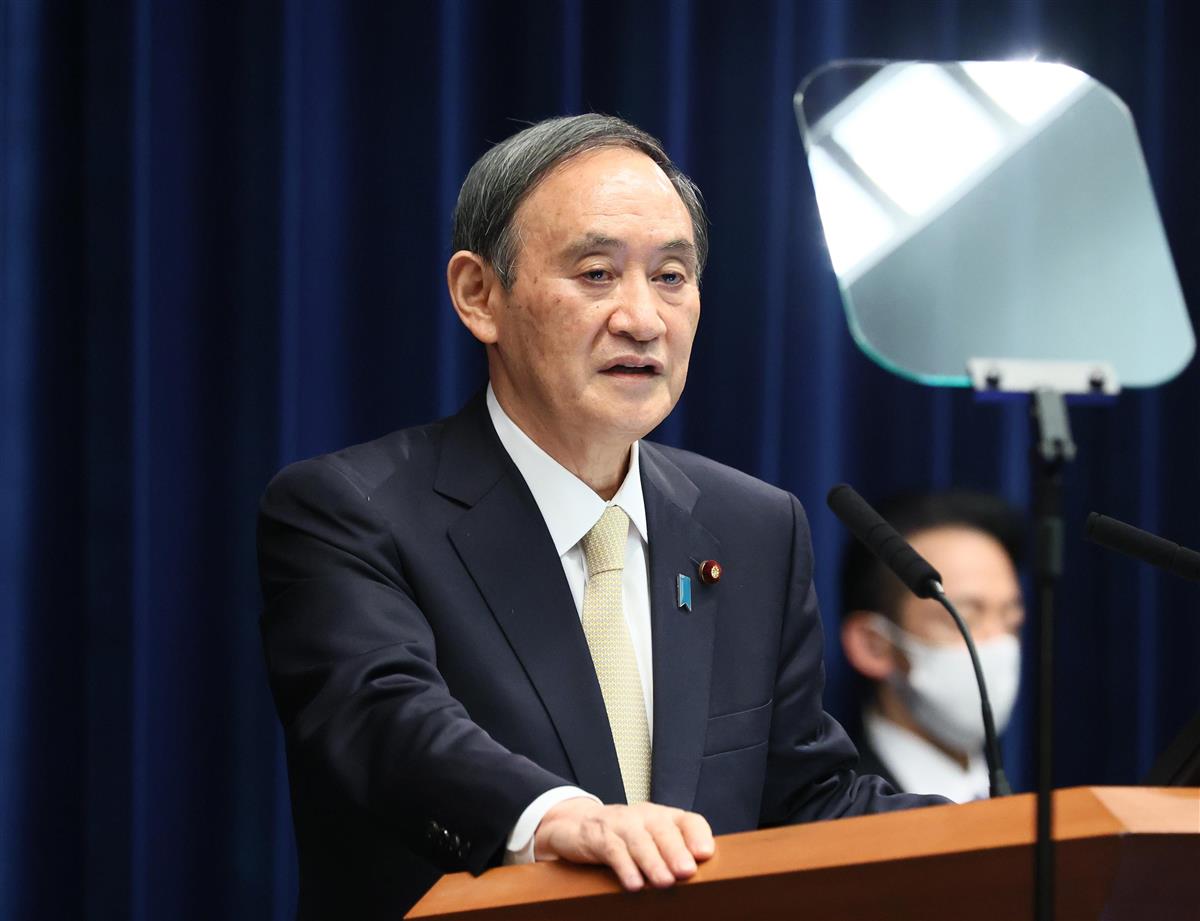 In a declaration on April 23, the Prime Minister announced the strongest measures yet in a bid to decrease the flow of people. This comes almost exactly one month after the lifting of the second state of emergency, which applied to limited regions in Japan.

This time the declaration focuses on the four most populous regions of the country: Tokyo, and Osaka, Kyoto and Hyogo prefectures. It is scheduled to be in place from April 25 to May 11, for a total of 17 days.

The biggest change compared to previous measures is a request for the closing of establishments serving alcoholic beverages and karaoke bars, and for all other restaurants to close by 8 P.M. in the evening. This is the first time that places like bars and restaurants have been formally asked to close.

“This time, we are not limiting the measures to the evening hours of restaurants, but also decreasing the movement of people in the cities and reducing the chances for people to come into contact, for stronger than ever measures against the virus,” said Suga.

In a strong appeal to all Japanese amid concern over the ability of the medical system to handle the most recent spike in COVID-19 cases and the lack of access to vaccines, Yoshihide Suga said:

“In order to bring back the normal everyday life of the people of Japan, I will extend [hospital] bed capacity, secure the vaccine, and do the utmost that I can in my capacity of Prime Minister.”

Measures Included in the 3rd State of Emergency

The main points made by Prime Minister Suga are listed below, by category.

All dining establishments serving alcoholic beverages, including karaoke bars, are asked to close (all hours). All other eateries are encouraged to close by 8 P.M. Residents are requested to avoid consuming alcoholic drinks outside.

All department stores, theme parks, and public venues such as museums where crowds might gather, and large venues over 1,000 square meters, are asked to close (all hours).

Sports matches, and in general high capacity spectator events, are asked to be held without spectators wherever possible.

Collective closures are not required.

Citizens are asked to avoid non-urgent and unnecessary outings, and to use telework to reduce office attendance by 70 percent where possible.

On top of financial help available through previously approved coronavirus mitigation packages, the Prime Minister announced additional financial support: ￥100,000 JPY ($925 USD) for for small-medium size businesses, and ￥200,000 JPY ($1,850 USD) per day for large businesses, for each day they are in compliance with government requested measures.

The first time Japan called a state of emergency in March 2020, it was to deal with an unknown pathogen. Falling short of a lockdown, which the country did not possess a legal framework for, it aimed to significantly reduce the chances of people coming into contact with each other and spreading the pathogen.

On that occasion schools were closed, restaurants were asked to reduce hours, theme parks were asked to close, and the general public was asked to enforce telework for up to 80 percent of business activity. The measures were in place for a total of 49 days.

In January 2021, following another rise in cases, Japan was again forced to call a state of emergency, which lasted a record-long 73 days. Measures at that time were aimed mainly at reducing interaction in restaurants, which experts deemed the riskiest locations for the spread of infection.

This time, in April 2021, the big difference is the rise of cases of mutant variants of the virus, which along with a widespread coronavirus fatigue, is bringing a renewed sense of crisis in the medical system. PM Suga explained:

We are particularly worried about the movement of the [mutant varieties of the] virus. They have reached 80 percent of new infections in Osaka, 70 percent in Kyoto and now 30 percent in Tokyo. Therefore we need to take strict precautions. There is great apprehension that if we don’t [act now], the increase in infections happening in the large cities could increase around the whole country.

This sense of crisis was echoed by Shigeru Omi, head of the government subcommittee for COVID-19, who was also present at the press conference. He explained that with the variants “Japan had entered a new phase.”

For that reason, Suga had concluded that it was important to declare a state of emergency at this point in time. “We decided that as we enter Golden Week, when many people go on holidays, it was important to enact an effective policy for a short period of time.”

Suga seemed conscious that he was asking a lot of the corona-fatigued population, which has been asked once again to telework and avoid going out, saying: “I am aware that by again declaring a state of emergency, I am causing a grave inconvenience to many people. For that I would like to apologize.”

The Prime Minister tried to bring a message of hope as well to citizens, stressing that Japan was bringing in a powerful weapon: the vaccine.

“During this battle, there are things that we have learned. And even in a harsh battle, I firmly believe that we will see the end of the fighting… To that end, I would like to ask for everyone’s cooperation.”

Regarding progress in public access to the vaccine, Suga gave a target date: “I want to create the conditions so that by the end of June, all local governments will have the means to twice vaccinate all those over 65.”

In addition, regarding the dispatch of a sufficient number of qualified personnel to perform the vaccinations, he promised: “We are making sure to secure all the necessary staff of nurses, and also making it possible for dentists to vaccinate.”

He also reiterated the plan previously announced with vaccine maker Pfizer on April 18, promising that enough doses for the whole of the eligible population over 16, would be available in Japan by the end of September.

However, there is concern that the pace of vaccinations has failed to pick up. As of April 22, 2.4 million medical workers had been vaccinated – fewer than a third of the total medical staff nationwide. At the same time, just 51,479 out of the 36 million people over 65 had received a jab.

What About the Olympics?

One question that many have wondered was: what about the Olympics?

However, Suga dismissed those fears, by saying:

“The first thing we need to do is focus on the emergency at hand. The idea that we would lift the state of emergency because there is the Olympic Torch relay is wrong –  they are completely unrelated.”

He continued: “I think that protecting the life of the people of Japan is of the utmost importance, and while doing that, I would also like to address the Olympics and Paralympics.”

To that end, Suga also reassured that the organizing bodies in Japan would take all steps that would ensure the safety of Japanese and foreign athletes, organizers and journalists alike.

Suga explained: “The measures include enforcing strict immigration rules and PCR tests for visitors, organizing special buses for moving visitors around in the city.” The idea is to avoid exposing Japanese citizens to potential variants brought from abroad.