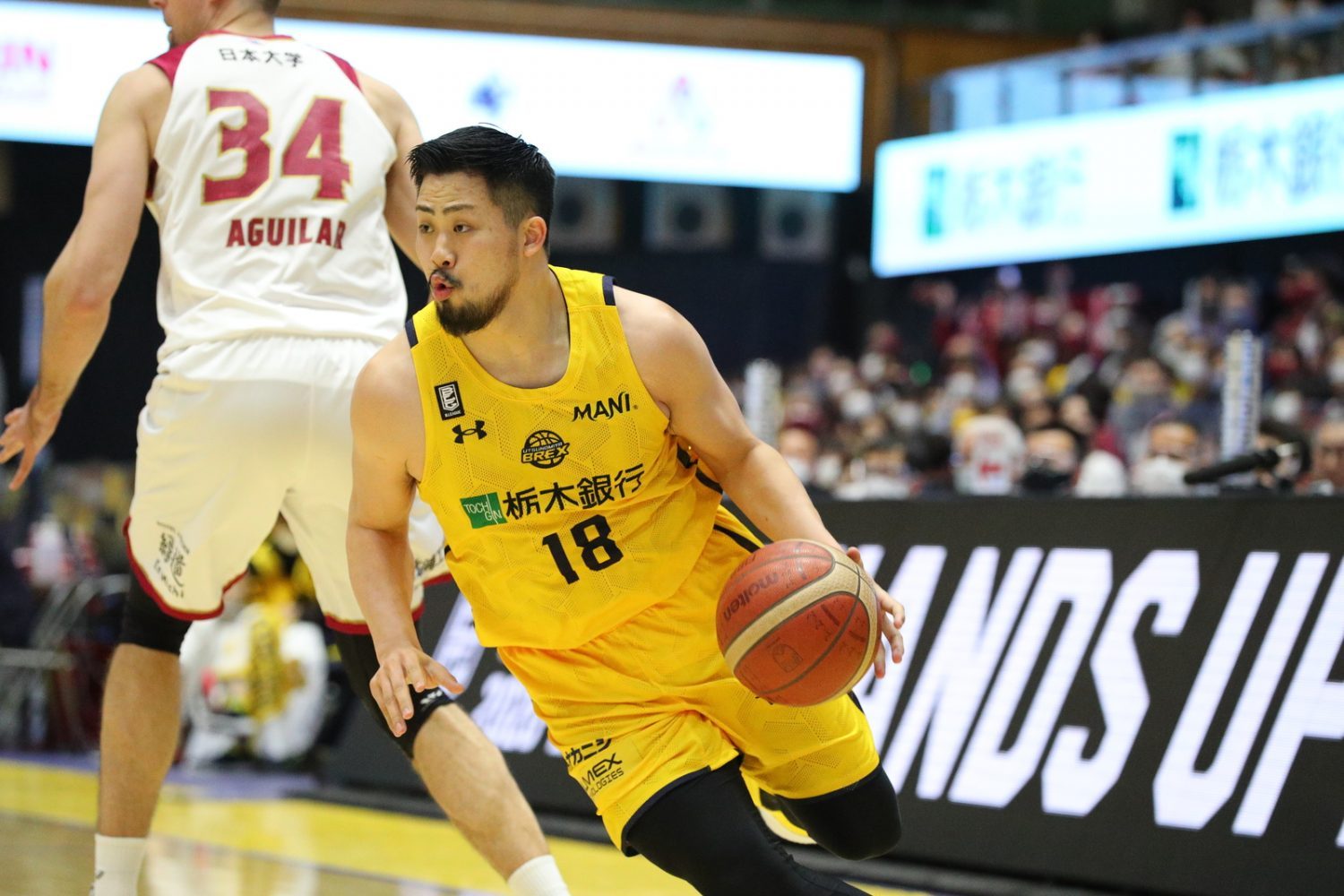 There are no earth-shattering revelations to report on the B. League’s winningest regular-season team as the playoffs get underway.

There are 20 teams in the B. League first team, and 19 of them would be delighted to replicate what the Utsunomiya Brex accomplished in the regular season: 49 wins in 60 games.

Roster depth and veteran talent are staples of the Brex roster. And don’t forget this: The Brex are the epitome of an unselfish team.

When the ball moves with such singular focus, good things can happen.

The Brex play host to the Sunrockers Shibuya in a first-round playoff series that tips off at 7:05 p.m. on Friday, May 14 at Brex Arena. Games 2 and 3 of series are set for Saturday, May 15 and, if necessary, Monday, May 17.

They’ve lost three in a row. But coach Tsutomu Isa’s squad aims to bounce back by finding a way to disrupt the Brex’s cohesive play and smart, team-first approach to the game.

It won’t be easy.

Buoyed by strong rebounding ー they were third in the league in rebounds (35.9 per game) and effective defense (third in blocks, 3.2; and fourth in steals, 7.2) ー the Brex are anchored by fundamental basketball.

Scott is the league’s second-leading shot blocker (1.3), setting the tone for the team as its top rim protector.

Similar to its passing numbers, the title-chasing Brex’s scoring production is spread out with role players and stars all making vital contributions.

The Sunrockers’ chief strengths are scoring (No. 3 in the league, 84.7 ppg) and forcing turnovers (second in steals, 9.0). Point guard Leo Vendrame, perimeter marksman Kosuke Ishii, forwards Ryan Kelly and James Michael McAdoo and bruising center Charles Jackson and their teammates aim for an upset in the opening round.

In the other first-round matchups, it’s Osaka Evessa vs. Brave Thunders, Jets vs. SeaHorses Mikawa and Ryukyu Golden Kings vs. Toyama Grouses. These three series all begin on May 15.

Look for D.J. Newbill, a strong offseason acquisition, to be the key catalyst for Osaka on offense. He was No. 8 in scoring (19.3) and third in assists (6.0) in the regular season. Newbill’s 3-point shooting skills (No. 3 in 3-point shooting accuracy at 44.3%) stretch the defense, opening up space for other players to operate.

Josh Harrellson, the league’s No. 5 rebounder (9.5), and Ira Brown augment the team’s versatile lineup. Takuya Hashimoto had a strong season, including a 34-point outburst against the Grouses on February 13, and provided 13.3 ppg.

Former NBA player Nick Fazekas is a go-to player for Kawasaki. One of the league’s premier all-around players, Fazekas averaged 20.7 points and 9.7 rebounds, finishing third and fourth in the circuit in those key categories. Veteran teammate Pablo Aguilar, who hails from Spain, is a defensive pest, as his 1.9 steals per game (No. 2) provide ample evidence.

By winning the Emperor’s Cup in January, Brave Thunders playmakers Yuma Fujii, Naoto Tsuji and Ryusei Shinoyama, among others, brandished their reputations, too.

The Jets’ aforementioned win streak is a reminder of their place within the league’s pecking order.

Coach Atsushi Ono’s squad earned back-to-back championship runner-up finishes in 2017-18 and 2019-20. A return to the final would have surprised nobody last spring, but the global pandemic forced the B. League to cancel the playoffs and end the season early.

With a retooled roster, the Jets remain a powerful force built to win. New additions Shannon Shorter and Sebastian Saiz fit in well with the team’s high-octane offense, a lineup built on speed.

Mikawa (34-21) relies on the inside-outside balance of its offense. Center Davante Gardner (19.9 ppg, No. 6) and emerging star Avi Koki Schafer (9.5 ppg) provided a big scoring punch close to the basket for coach Kimikazu Suzuki’s club. Newcomer Kyle Collinsworth made a major impact as a passer (6.0 assists, fourth) and rebounder (9.0, sixth). The SeaHorses were among the league’s top three in scoring (third, 84.8), assists (third, 22.4), 3-point shooting (second, 38.1) and free-throw shooting (third, 77.0). Kosuke Kanamaru was instrumental in the team’s impressive shooting numbers in the regular season, finishing second in 3-point shooting (46.6) and second in free throws (90.7).

Home-court advantage is diminished due to crowd limitations (50% maximum crowds)  imposed by the league due to the COVID-19 pandemic, but that hasn’t stopped the Golden Kings (40-16 overall, 19-7 at home) from enjoying success in Okinawa.

Toyama can’t rely on Julian Mavunga alone to beat the Golden Kings, but when he’s involving his teammates in the offensive attack with regularity, the Grouses are a real handful. Mavunga was tied for No. 3 in scoring (20.7) and placed  first in assists (7.4).

A savvy courtside tactician who spent the past nine seasons leading the Kyoto Hannaryz, Hamaguchi seems ready to orchestrate a playoff upset.

When the dust settles and the opening round and semifinal round are complete, fans can look forward to the B. League championship series on May 29 and 30 and, if necessary, June 1 at Yokohama Arena.

Update on B2 Playoffs

With the opening week of the B. League second-division playoff tournament completed, here are the following matchups for the semifinals:

The two semifinal series are set to be played Saturday, May 15 through Monday, May 17.

In first-round showdowns, Sendai defeated the Nishinomiya Storks in two games and Gunma replicated that result against the Yamagata Wyverns, while Ibaraki defeated the Saga Ballooners in back-to-back games.

Koshigaya lost Game 1 against the Fighting Eagles Nagoya, but won the next two contests to close out the series.

Ravena Returning to NeoPhoenix Next Season

He sustained an injured left knee and a broken finger and also had a positive COVID-19 test in late November, which forced him to be self-quarantined for two weeks.

The NeoPhoenix went 12-47, finishing with the second-worst record in B1.

Now, Ravena is shifting his focus to the 2021-22 campaign. He agreed to a contract extension for the upcoming season.

“We got unfinished business, (NeoPhoenix),” the 24-year-old wrote on Twitter.

Ravena said the recently completed B. League regular season was a disappointing overall experience. He averaged 9.1 points, 3.6 rebounds, 1.6 assists and 22.8 minutes per game.

“…I wasn’t in 100% condition and 100% in shape coming to Japan,” Ravena was quoted as saying by the Manila Bulletin this week.

“But I mean, the season’s done and I have a chance to prepare and to really show what I can give to the game as a player and to the team as well.”

He also said he hopes the disappointment of this season will serve as a positive motivational force to help his team achieve success next season.

“The season’s done and I have a chance to prepare and to really show what I can give to the game as a player and to the team as well,” Ravena stated, according to the Manila Bulletin.

“So hopefully, we stay healthy this summer and I’m just gonna work my butt off in order to be the best player that I can possibly be.”