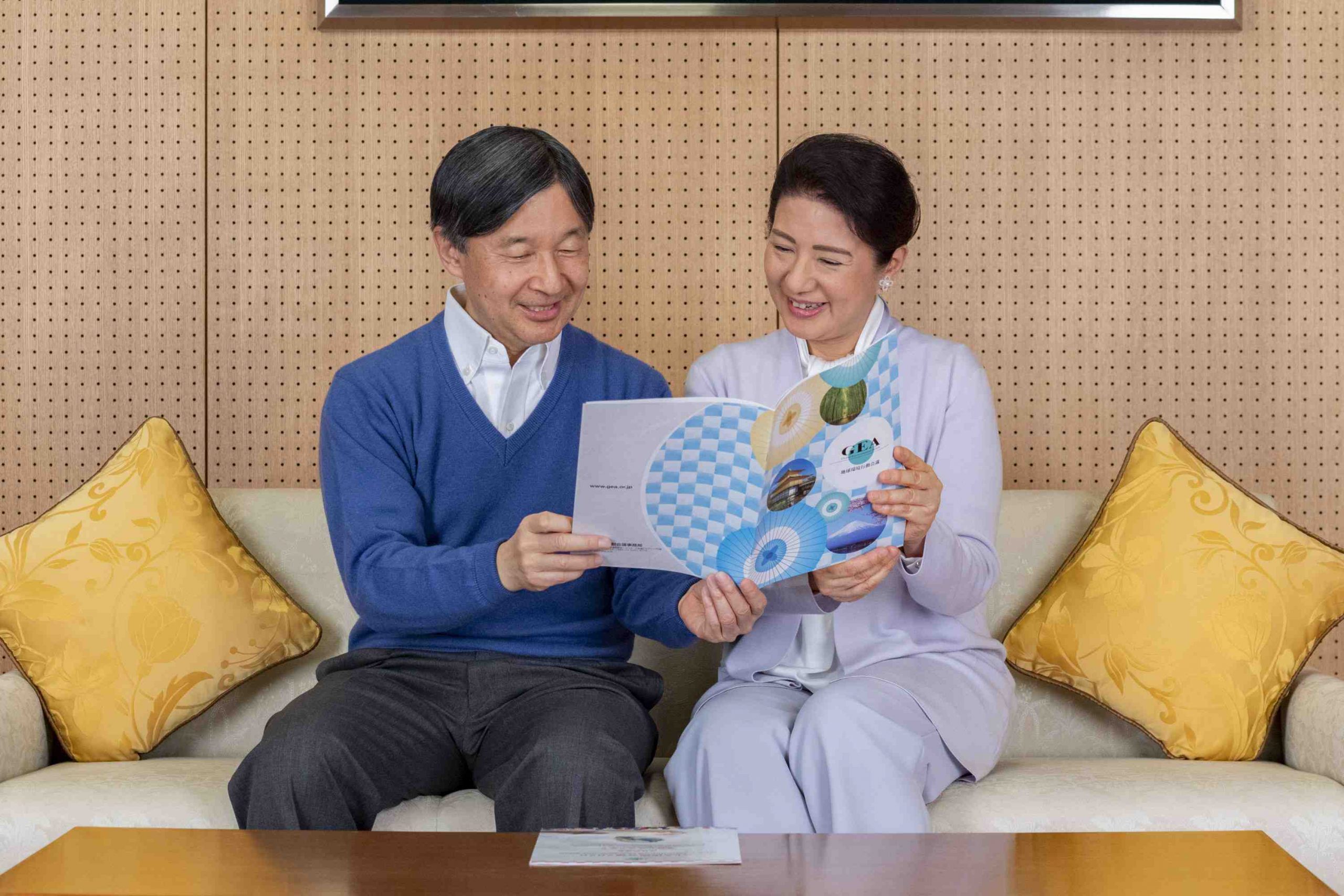 Emperor Naruhito and his wife, Empress Masako, on the occasion of the Emperor's Birthday on February 23, 2021.

People often say that music has power to connect, but how often do we feel this sentiment in reality?

The renowned British six-man group that has been called “The Kings of A Capella”, The King’s Singers (TKS) this year is showing how people of Japan and the U.K. can come together in times of adversity.

On February 26, The King’s Singers performed a version of “Hana Wa Saku”, commissioned by the Embassy of Japan in the UK., on occasion of Japanese Emperor Naruhito’s Birthday (which is on February 23).

In a cheerful Zoom call On April 23, JAPAN Forward caught up with group’s Japan liason and tenor Julian Gregory to hear about the group’s life during COVID-19, and learn whether fans can expect to see The King’s Singers in Japan in December 2022.

Performing for the Emperor’s Birthday

Julian Gregory explained the background behind the festive occasion.

“In July of 2019 July, we went to Japan and did a concert at Tokyo Cathedral, which princess Takamado [of the imperial family] attended.

“Since then, we have been in touch with The Embassy of Japan [in the U.K] and invited the representatives to our concert Heiwa last October, for our digital concert show series. The Embassy staff enjoyed it so much that they invited us to sing the national anthem at the Emperor’s birthday party in London, in February [2021].”

The choice of song was just as important. After some consideration, in addition to the national anthems of Japan and the U.K, the song “Hana Wa Saku” was selected because it was particularly favored by the Emperor, the title means “flowers will bloom”. It was originally commissioned by NHK in the aftermath of 3.11, and is still today closely associated with Japan’s collective memory of the disaster.

In fact, Julian Gregory explained he was very mindful of conveying the correct emotion, and he himself was the one who arranged the song for The King’s Singers. “The mood of the piece is one of nostalgia, but also hope. So I wanted it to be in a major key, a happy key,” Gregory explained.

He added “a Japanese kind of harmony,” he said, which affected the chords in a couple of verses.

Empathizing with those who experienced the earthquake and tsunami, The King’s Singers tenor decided to start the song with just one person singing, and then have others slowly join, to give a “sense of building from one person into a community.”

Reflecting back on the performance, Gregory said: “It was a huge honor for us, and it was one of the few [in person] performances we could do because it was domestic and we could all easily go to London.”

The King’s Singers were started in the 1960s from a group of students at Cambridge University, and have since been performing a capella music all over the world, with a repertoire ranging from 16th century choral music to contemporary pop songs.

For many people connected with Japan, 3.11 tends to be an event for which people remember exactly what they were doing when the earthquake hit, and Julian Gregory is no different. He told us that he remembers clearly seeing the news in his room at Cambridge University, where he was in his second year.

Julian Gregory himself visited the affected area in the aftermath of the March earthquake, in September 2011.

“I went to Ishinomaki,” he recalled. “We went to an infamous school which had all but disappeared, apart from its skeletal steel structure. I remember going there, and one single person was in sight. I thought of what it would be like to have this huge earthquake and the tsunami wash everything away.”

He recalled feeling frightened, not knowing at the time the extent of radiation escaping from Fukushima. He recounted a particular episode that stuck with him:

“The volunteers had helped those living in a house off the coast which had just missed the tsunami. The next door neighbor’s house, just a few feet below, was gone. Seeing that severity, that contrast between life and death, was pretty impactful.”

It’s this awareness of Japan and how it is affected by natural disasters that prompted The King’s Singers to take it upon themselves to cultivate a relationship with Japan.

“What is strange is every time we tour Japan I always meet someone who knew someone who had either passed away, or been severely impacted by the earthquake. This is a strong theme in Japanese culture in general, because earthquakes happen again and again.”

He translates that understanding to the group’s role, saying, “Japan is unique in that it needs constant healing, which is why music, and peace are so much more important.”

As it happens, in 2020, the sextet was supposed to tour the world with the program “Finding Harmony”, including a tailored plan specifically created for Japanese fans, “Finding Harmony in Japan: Heiwa.”

The program included two world premiere commissions by Japanese composers Makiko Kinoshita and Eisuke Tsuchida, together with a charity concert at Kaiseizan Dai Jingu Shrine in Koriyama with Fukushima Boys & Girls Choir, with the proceeds going to help locals still suffering in the aftermath of the earthquake.

Now, The King’s Singers are finally seeing the end of the tunnel of COVID-19. Gregory explained that they are organizing tours for the winter 2021, and planning to come to Japan in December 2022.

“I think part of the program [in December 2022] will be Christmas music, traditional English carols, maybe some American Christmas jazz. It’d be lovely to perform at least one of the Japan Commissions, maybe Mariko Kinoshita’s Ashita no Uta. And Hana wa Saku. And so, if we did do a collaboration, [with a local choir] that would also be great,” said Gregory.

The past year has been an unusual one for the sextet. Touring an average of 200 days a year and performing 120 concerts before the pandemic, they are a prominent fixture in the global classical and choral music scene.

While waiting for the upcoming touring season, the six members of the group are keeping busy with personal activities. Julian is studying Japanese, Pat Dunachie is undertaking a part-time masters program in International Foreign Intelligence, and Jonathan Howard is doing some voice acting.

Professionally, the group was also asked to step in at the last minute and perform in the Christmas (2020) television broadcast, “Carols from King’s”, and again for the Easter (2021) broadcast. Both registered millions of views on BBC.

The King’s Singers also announced that they had received a Culture Recovery Grant from the Arts Council England in the beginning of April. The grant will help the a capella group get back on their feet in the coming year.

“We have plans to create music videos, to engage our fan base, to invest into 2023 programs and products.”

These include the release of an album of children’s songs, and the first ever rendition of songs by 16th century composers William Byrd and Thomas Weelkes. As Julian Gregory aptly concluded:

“Using the Culture Recovery Grant enables us to carry out those projects which give us that sense of meaning and purpose, which, right now we need more than ever. When everyday merges into the next one, it’s nice to have a sense of, “This is our project, and it’s going to hopefully impact people, for the better. “