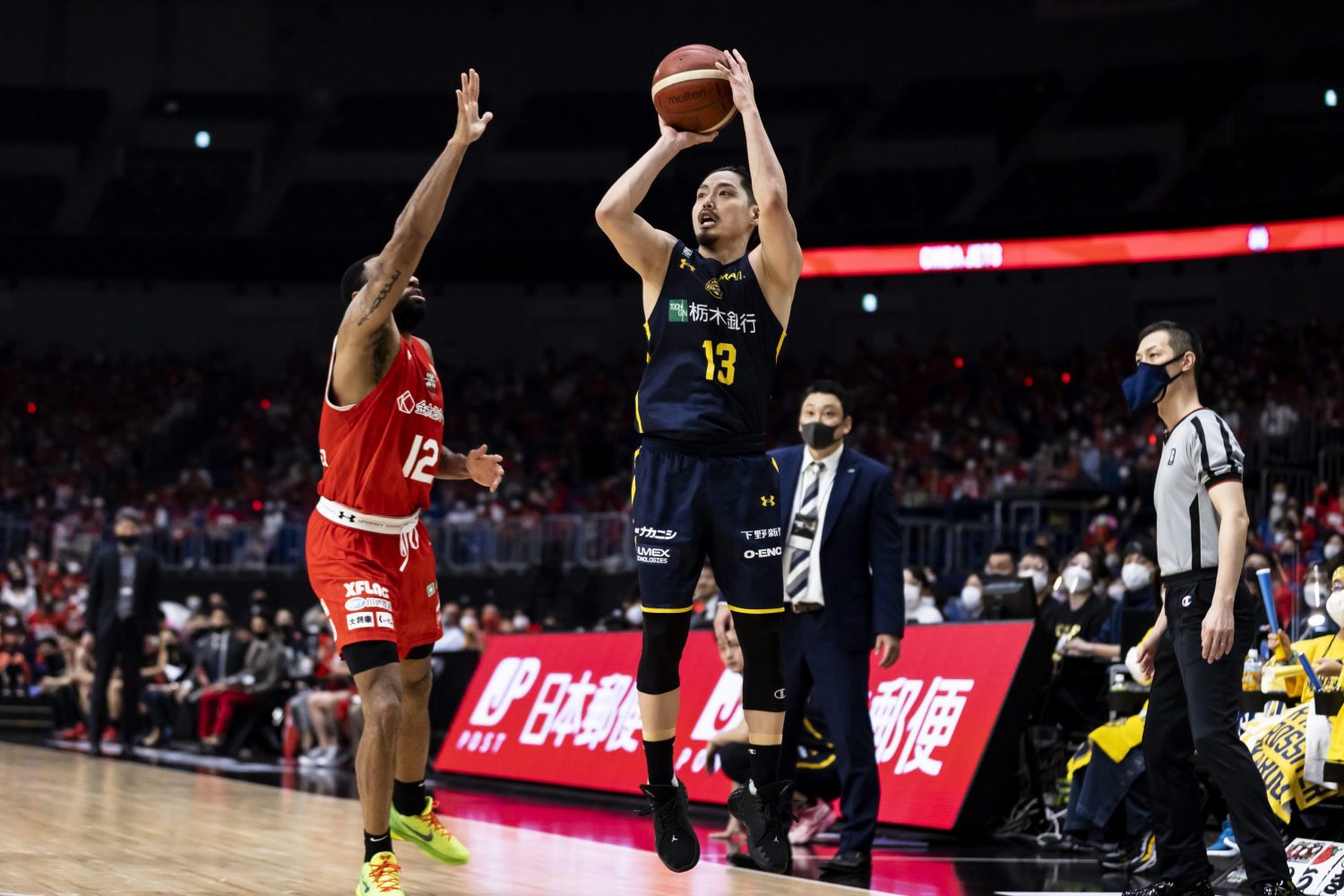 Brex guard Hironori Watanabe shoots a jumper in the fourth quarter in Game 2 of the B. League Finals on May 30. (B. League)

YOKOHAMA ー Determined to extend their season into June, the Utsunomiya Brex delivered a high-powered, quality performance in a must-win game against the Chiba Jets on Sunday, May 30.

Utsunomiya’s 83-59 victory in Game 2 of the B. League Finals evened up the series at one game apiece.

Game 3 is set for Tuesday evening, also at Yokohama Arena, at 7.

The Jets (43-14), who had the second-best winning percentage, defeated the Brex 85-65 in the championship series opener on Saturday, May 29.

In Game 2, the Brex were the aggressors and won both key categories.

Second-chance points: A 21-7 edge for Utsunomiya, which also outrebounded Chiba 42-32.

Jets captain Yuki Togashi drained a 3-pointer to give his club a 5-3 lead with 9:15 to play in the first quarter.

Rossiter repeated that sequence on his team’s next trip down the floor on offense, snaring another offensive rebound and scoring in the low post.

This was part of a 15-0 scoring run that signaled Utsunomiya had put its Game 1 loss in the rearview mirror.

Moments later, the Brex had built an 18-5 lead by the midway point of the opening quarter.

Chiba pulled within 19-14 on a Shannon Shorter layup, but Utsunomiya refused to back down, playing with relentless energy at both ends of the floor.

Brex veteran guard Hironori Watanabe nailed a pull-up jumper and flushed a 3-point dagger to beat the shot clock. That made it 24-16. On those two possessions combined, Watanabe had more than doubled his scoring output in the opener (two points). Backup big man Kosuke Takeuchi scored on a putback before the buzzer sounded at the end of the first, giving Utsunomiya a 26-16 advanage.

The Jets were held to 16 points in each of the three quarters.

The Brex, meanwhile, put 26 on the board again in the second quarter to take a 20-point lead into halftime. A day earlier, they trailed 36-35 at the break before Chiba flipped the script in the second half.

Utsunomiya’s 52-32 halftime lead and its noticeable uptick in productivity in all aspects of play proved too much for Chiba to overcome.

Before Sunday’s rematch, Anzai said his team analyzed its shortcomings from Game 1, with each player taking stock of what went wrong for the Brex.

The Brex’s comprehensive Game 2 win was “the result of all the players taking pride in re-examining their strengths,” Anzai commented.

Case in point: Utsunomiya’s Ryan Rossiter had an impactful 17-point, 11-rebound, six-assist, three-steal effort. He had a quiet eight-point outing in Game 1.

Chiba’s Sebastian Saiz scored 15 points and grabbed nine rebounds. Gavin Edwards contributed 12 points and nine boards and Yuki Togashi had nine points. Josh Duncan, who scored 14 points in Game 1, was plagued by foul trouble on Sunday and was held to four points before fouling out in the fourth quarter.

The Brex dished out 21 assists and turned the ball over 12 times. The Jets registered 12 assists along with 19 turnovers.

Reflections on the Game

Ono described Game 2 as the polar opposite of the series opener for his team.

“I think we lost all the parts [of the game] that we were able to win yesterday, such as rebounding, loose balls, and ball [control],” the Jets coach stated. “I will use this as reflection material, but I would like to prepare for Game 3.”

“[For Chiba], the game was exactly the opposite of yesterday’s,” Togashi commented. “As a team, I think it was a difference in consciousness and feelings rather than tactics, so I would like to prepare especially mentally for another chance.”

As both teams walked off the court after Game 2, the Jets carried the look of disappointment on their faces, while the Brex shared a moment of joy.

“One more, one more,” said Yuta Tabuse, a longtime Brex guard and the first Japanese to play in the NBA. He entered the game late in the fourth quarter for the first time in the series, and recorded an assist on a Gibbs 3-pointer with 2:08 remaining.

Tabuse’s message was a succinct reminder to his teammates of their only remaining goal this season.

Rossiter, who had team-high totals in points, rebounds and assists and shared the team lead in steals with Seiji Ikaruga, said the Brex rose to the challenge in Game 2.

“We did what we had to do,” the Siena (New York) College alum said.

“We played hard and we played together the entire game.”

As far as Rossiter is concerned, there’s little time to savor Sunday’s victory.

He said what happened in Game 2 “doesn’t matter any more.”

“We’ve got to get ready for Tuesday,” Rossiter concluded.