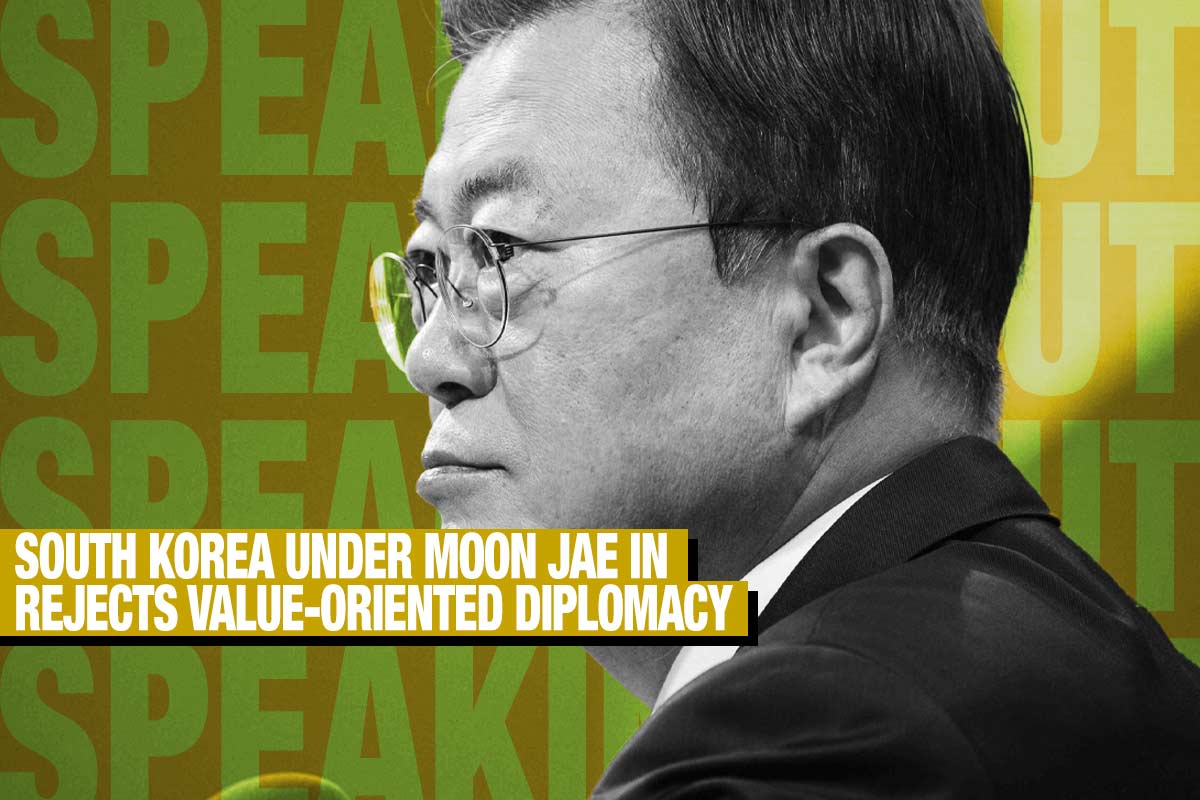 South Korea under President Moon Jae In has rejected value-oriented diplomacy. A U.S.-South Korea summit on May 21 has led me to conclude so.

Refraining From Criticizing China by Name

“President Biden and Prime Minister  Suga… shared their concerns over Chinese activities that are inconsistent with the  international rules-based order, including the use of economic and other forms of  coercion,” the U.S.-Japan statement said. “We reiterated our objections to China’s unlawful maritime claims and activities in the South China Sea,” it continued.

In contrast, the U.S.-ROK statement said about the same subject: “The United States and the Republic of Korea oppose all activities that undermine, destabilize, or threaten the rules-based international order…”

The U.S.- ROK statement included the phrase “the importance of preserving peace and stability in the Taiwan Strait”. But failed to express concerns regarding the human rights situations in Hong Kong and the Xinjiang Uyghur region, as seen in the U.S.- Japan statement.

While the U.S. and Japan in their joint statement vowed to “work with allies and partners, including with Australia and India through the Quad… to build  the free, open, accessible, diverse, and thriving Indo-Pacific,” the U.S.-ROK  statement said that the U.S.-ROK relationship “anchors our respective approaches to the Indo-Pacific region”. It says only that the two countries “will work to align the ROK’s New Southern Policy and the U.S.’ vision for a free and open Indo-Pacific” and “acknowledge the importance of open, transparent, and inclusive regional multilateralism including the Quad.”

These sentences in the U.S.-ROK statement mean that South Korea does not share the free and open Indo-Pacific vision. Nor  does it intend to join the Quad.

Conciliatory Attitude Toward the North

The U.S. and South Korea indicated a subtle difference between them over how to deal with North Korea. In the joint statement, President Moon welcomed the conclusion of the U.S.’ North Korea policy review as an approach that is “open to and will explore  diplomacy with North Korea,” hinting at his wish to see progress in Washington-Pyongyang talks.

The U.S.-ROK statement called for the full implementation of relevant United Nations Security Council resolutions by the international community and North Korea, meaning that sanctions on North Korea might be maintained. Given that the Moon regime has insisted that humanitarian aid is not subject to sanctions,  however, it still holds onto its hope to ease the sanctions.

Moon has thus avoided confrontation with authoritarian China, maintaining an attitude of giving priority to conciliation with North Korea. China immediately came out with a strong reaction to the Japan-U.S. summit and joint leaders’ statement. But Beijing has not criticized the U.S.- South Korea summit.

South Korea, under Moon Jae in, is not a partner for Japan’s value oriented diplomacy.

(A version of this article was first published by the Japan Institute for National Fundamentals, Speaking Out #796 in Japanese on May 24, 2021.)

Tsutomu Nishioka is a senior fellow and a Planning Committee member at the Japan  Institute for National Fundamentals and a visiting professor at Reitaku University.  He covers South and North Koreas. Find his articles in JAPAN Forward at this link.