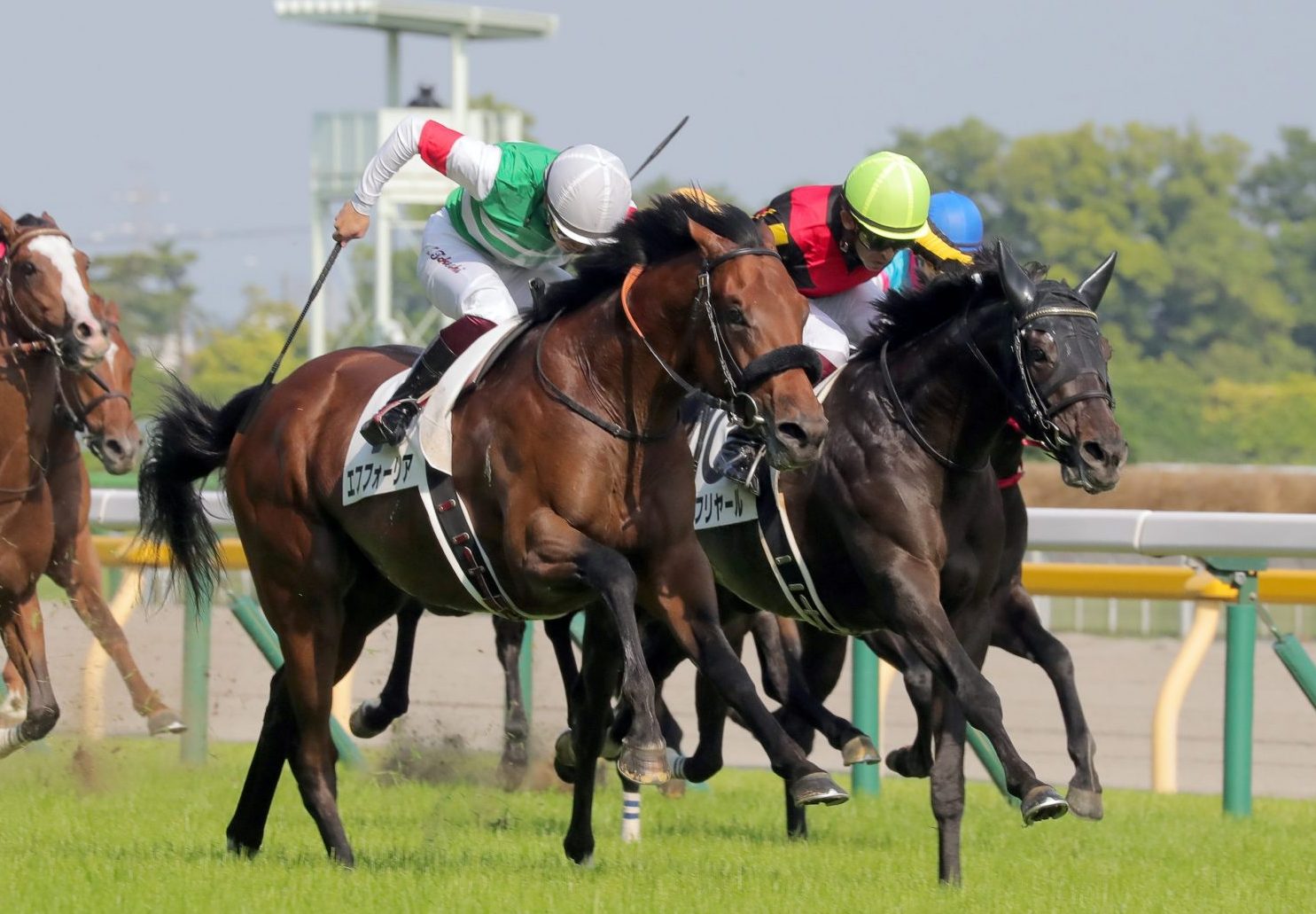 Shahryar (on the inside) beats Efforia in a down-to-the-wire finish at Tokyo Racecourse on May 30.

In a two-horse battle at the front of the pack over the final 100 meters, Shahryar was faster than rival and race favorite Efforia.

That proved to be the winning recipe in the 88th Tokyo Yushun (Japanese Derby) on Sunday, May 30, with Shahryar beating Efforia by a nose.

Jockey Yuichi Fukunaga and fourth favorite Shahryar teamed up for a race-record time of 2 minutes, 22.5 seconds, topping the previous mark by 0.1 seconds in the 2,400-meter race. (Watch a replay of the race here.)

For Fukunaga, it was his third career Japanese Derby victory. He won last year’s Tokyo Yushun aboard Triple Crown winner Contrail and also triumphed with Wagnerian in 2018.

Overall it was victory No. 30 for Fukunaga in Japanese Racing Association Grade 1 races.

“It’s so great to have won the [Japanese] Derby, which I had made it my target with this colt ever since his debut,” Fukunaga said. “We were keeping an eye on the race favorite but the race didn’t go as smoothly as planned, and we were in a tight spot so we were forced to make our charge late, but this colt really gave a terrific effort.”

Takeshi Yokoyama rode Efforia to victory in the Satsuki Sho (Japanese 2000 Guineas), the first leg of the Japanese Triple Crown, on April 18 at Nakayama Racecourse in Funabashi, Chiba Prefecture.

And it appeared that Efforia was on the verge of winning this year’s Tokyo Yushun, the second leg of the Triple Crown, which featured 18 3-year-olds, with under 200 meters remaining.

But as the race drew to a close Shahryar’s increased speed paid dividends, cutting the distance between the two horses and making it a neck-and-neck duel to the finish line. As Shahryar made his dramatic move to the front, he galloped past Gratias and Titleholder on the inside, signaling his arrival as a late title contender.

Down the stretch, Efforia, racing to Shahryar’s right, tried to hold off Shahryar, but came up just short. From the inside, Shahryar maximized every stride under the capable controls of Fukunaga to eke out a victory.

Bathrat Leon set the pace and led for a large chunk of the race before fading down the stretch. Jockey Yusuke Fujioka’s bay colt wound up in 15th place.

Shahryar became the seventh Deep Impact-sired thoroughbred to win the Tokyo Yushun, including in each of the last four years. Wagnerian (2018), Roger Barrows (2019) and Contrail (last year). In 2012, Deep Brillante, was the legendary horse’s first offspring to emerge victorious in the Japanese Derby.

The Kikuka Sho, the final leg of the Japanese Triple Crown, is set for October 21.