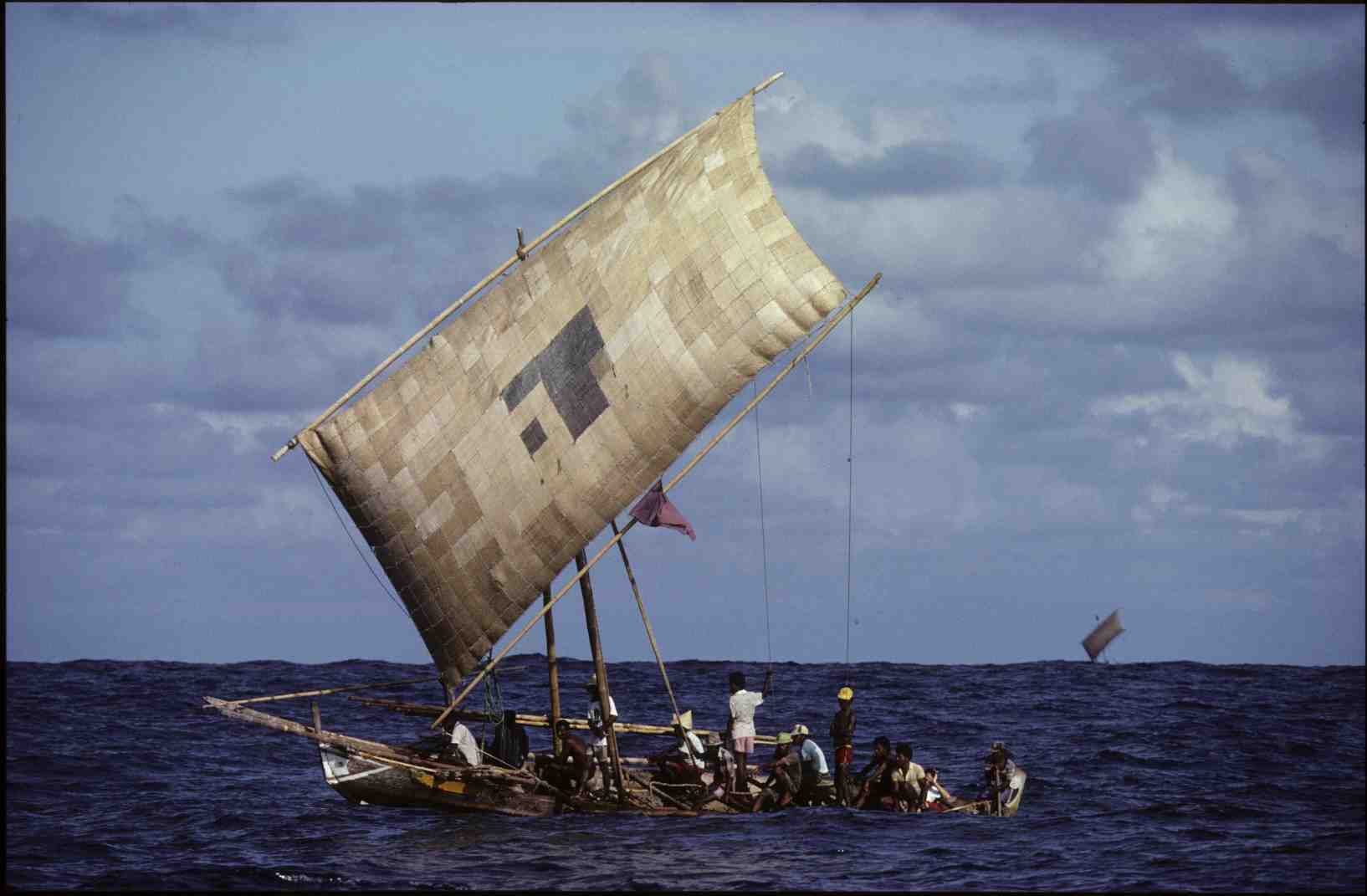 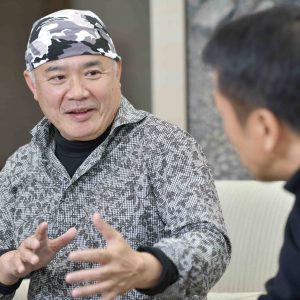 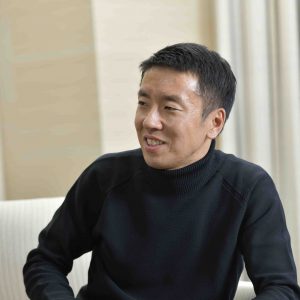 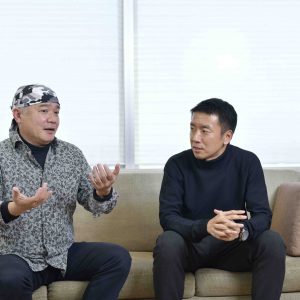 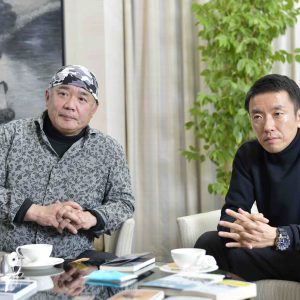 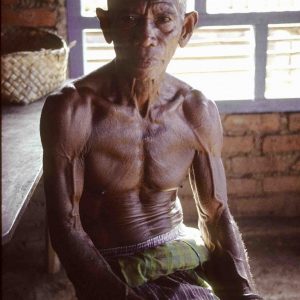 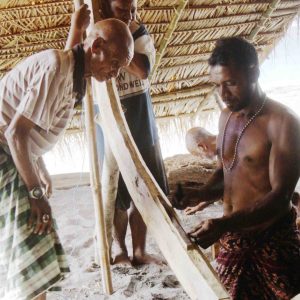 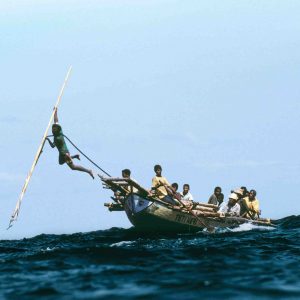 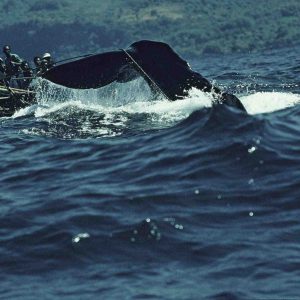 Just one minute into the film, we understand that this isn’t your average whaling documentary. The viewer is pulled into the scene through a closeup of the eye of a whale. As the camera gradually moves away, we realize that this whale, on the brink of death, has what looks like tears clouding its eyes. It looks like it’s crying.

We then hear one of the fishermen explaining: “You see, whales are not like other fish. When they die, they close their eyes.” And, it appears, they also shed a little tear.

The scene is simple, yet the poignancy of the rare footage deepens our insight into Ishikawa’s purpose: through images, he is showing a different face of whaling, cast through the lens of a tiny village in Indonesia called Lamalera.

After three years of filming and almost one year of editing, the work of the freelance journalist and former Agence France-Presse (AFP) photographer is coming to completion.

The Sankei Shimbun and JAPAN Forward sat down with Bon Ishikawa to understand what the film had achieved. We were joined by renowned photographer Naoki Ishikawa (not related to the director), and whaling expert and Sankei Shimbun journalist Masaaki Sasaki. 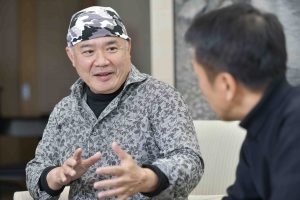 The journey started nearly 30 years ago. “I initially went to Lamalera in 1991 because I was doing a project on religions in communities around Asia. That was the first time I met a lamafa (the local word for whale harpooner),” said the Japan-born film director. (RELATED: A Film 27 Years in the Making Captures Life in Whale-Hunting Indonesian Village)

Ishikawa explained that Lamalera is a village on a strategically positioned island, as historically whales pass in front of the bay. This proximity explains the village’s enduring tradition of whaling. Using merely wooden boats built by hand, the fishermen go out to sea for three months a year, hunting whales. When they find one, harpooners jump into the air and dive in, harpooning the whale below, sometimes risking their lives to bring food back to the villagers.

As a photographer with AFP until 1990, Ishikawa benefitted from having traveled widely for his work. Lamalera at the time had no electricity, no water, no road to reach the mainland. It left an impression on Ishikawa, then in his 30s. He kept coming back. The impetus to produce a film came on his return to the village in 2010.

“At the time, there was an old man who was complaining about the younger generations. ‘They only think about money,’ he said. But he knew that I had been producing all these photos and so on, so he asked me, ‘Can you please show the young generation what the life of a lamafa is like?’”

The film director explained how this was a real turning point for him.

“I had always wanted to make a film about the village and show it in Japan, or publish it in a magazine overseas. But it was the first time it occurred to me that this could be welcomed also by the local community. I was very happy. That was a big motivation for me.”

Harpooners Provide for the Community 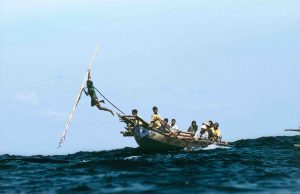 With that aim, the film brings us to the very heart of what it means to be a harpooner in this tiny town.

We are introduced, by people of different generations, to the nitty gritty of the job, how the harpooners operate, how a whaling boat is made, what whaling means to the village. In this sense, the film becomes a record for the collective memories of the community.

It manages to inspire us with deep empathy for the sense of responsibility these individuals have to provide for their community while fighting the might of nature.

If they don’t catch the animals, the secluded community with little arable land might starve. But the task itself is daunting.

One harpooner confesses on camera, “The first time I went out, I was terrified.” Ishikawa also shared with us the anecdote of a harpooner who was too scared.

In fact, fear is justified as accidents do happen. A particularly poignant moment of the film chronicles the disappearance of Benjamin, one of the harpooners, on one of the fishing expeditions. There is an accident and his body is never found. Ishikawa’s intimate imagery reveals heart-wrenching scenes of the whole community coming together in mourning. 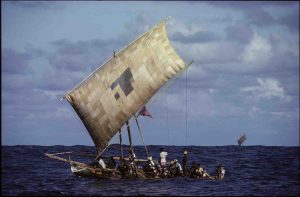 As much as it’s a beautiful secluded community, even Lamalera can’t escape the claws of modernization and globalization.

Early on in the film, one of the characters, Pisdoni, shares with the viewers how he had initially moved to Bali to earn a solid income.

“But it was a life dominated by money. Here, I can hunt whales, I can go to the market and exchange it for fruit and vegetables.” In essence, money doesn’t mean happiness.

Ishikawa manages to capture how, even in this changing world, the village places immense value in protecting harmony with nature. “It is often said [in the community] not to disturb the harmony. If you do, accidents happen”, explained one of the villagers.

Outside pressure exists. The anti-whaling associations tried to prod lamafa away from whaling by introducing gillnets into the village. The Food and Agriculture Organization of the United Nations offered a whaling ship in the 1960s capable of increasing their yearly catch by about five times. Yet, as the film explains, they chose not to go in either direction. Ishikawa explained the villagers thinking:

“It was expensive to repair and change parts [of the ship], but people would also say, ‘It’s not good to catch too much,’ ‘The traditional way is fine.’”

Simple, ordinary interactions caught by the film show the values of the community and can’t help but make us smile. From the grandfather explaining to a grandchild the time when there were no boat engines, to a little boy’s adoration for his fisherman father, and children imitating harpooners while playing in the seawater with friends. Not for a moment do these families look different from us, or unhappy. 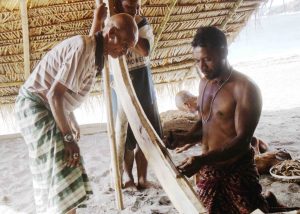 The film documents the making of a boat, and along the way conveys the villagers’ respect for objects in nature. The boatbuilding is purely by hand, using no blueprint or nails, and it takes several months. The finished wooden vessel is painted with bright colors and eyes on the side. A local in the film says that “The boat lives,” it has a “spirit” that “protects us — just like a mother hen, it protects its 10 little chicks.”

When a whale is caught, nothing is wasted, not even the oil. Masaaki Sasaki explained that the village captures the concept of mottainai — not wasting — which perhaps has been lost in Japan.

Even in the death of Benjamin the harpooner, the community’s strength is compelling. They come together to start again in an almost collective act of bereavement. To fight the bad omen of his disappearance, the whole community builds another whaling boat and embarks on a new season of whaling.

Bon explained: “Life in nature, in the mountains, is tough. In the case of Lamalera, there is definitely the problem of fighting against the whales. Without the human relations, though, you wouldn’t be able to do it.”

Naoki Ishikawa, a photographer who has traveled the world, summarized the thought:”I think there is wisdom in putting your foot down and continuing the traditional ways. But also, I believe instead of ‘Oh they are behind, hence this is happening,’ it’s more that they choose independently, they try not to catch too many whales, they think of the ocean. When so many people overfish, they choose their own way of doing things.” 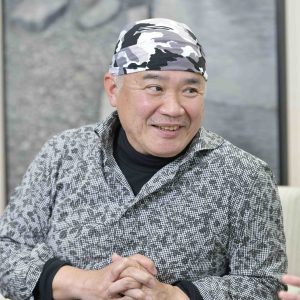 Bon Ishikawa had always wanted to be a filmmaker. In the process, he ended up at AFP as a young adult, before going freelance in 1990.

Watching Kujira Bito, one doesn’t stop to reflect that it took three years of filming, one year editing, and almost 30 years of cultivating relations on the ground. Aesthetic photography, coupled with compelling footage, make for an experience which immerses the viewer in the reality of the village as it is, with no added narration.

The images are stunning, ranging from close range, underwater graphic images of an injured bleeding whale, to the village people. There is also drone footage providing an unprecedented view of the boat’s approach and immense scale of the creature.

But what strikes one most is the sheer closeness Ishikawa developed with the community over the years, which led to this unprecedented footage. The film director shared with us the feedback he got from a whaling researcher living in Taiji, Jay Alabaster.

“A researcher in whaling, Jay [Alabaster], shared with me, ‘For my research, I have seen tens of documentaries on whaling. There is no comparison.’”

Ishikawa took this feedback as hint that his film could have an impact on the opinion people have of whaling, and he summed up his hopes about the film, explaining:

“This is such a broad theme…the circle of life. I would like people abroad to see it in film festivals and so on. I think it’s a topic that can leave an impression. In other words, whaling is a topic which supersedes politics…. It’s a story about how humans should or shouldn’t live. I hope that, regardless of nationality, this film can become an opportunity for people to think about that.”

Photographer and nonfiction author Bon Ishikawa was born in 1960 in Oita Prefecture. After working as a photographer for the French news agency AFP, he has worked from 1990 as a freelance photojournalist. His work has taken him to more than 60 countries around the world for photography on the theme of the symbiosis between nature and humans. His literary books and photo books include The Last Whale Hunters (Shinchosha, 1997), Inori No Daichi (Iwanami Shoten, 2014) and The Days After : Higashi Nihon Daishinsai No Kioku (Asuka Shinsha). He directed the film, The Most Beautiful Village in the World, which premiered in 2017.

This article was written in collaboration with the Institute of Cetacean Research.