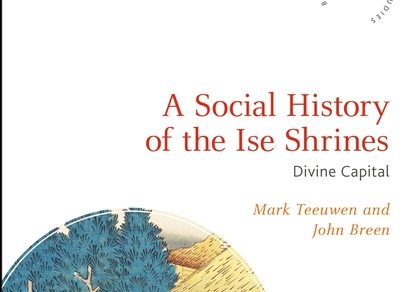 Out of the way and nestled in the foothill forests of the Shima peninsula, Ise is home to the inner and outer Ise shrines. An awe-inspiring series of paths and rustic structures set among a hushed natural landscape, it is certainly one of the most beautiful Japanese travel destinations. It is also well-known geopolitically, as Prime Minister Shinzō Abe hosted the G-7 there in 2016.

But what exactly is Ise, and how does it fit within the broader history of Japan? Is the Ise of today the same as the Ise of a thousand, or even 50, years ago?

The answers can be found in Mark Teeuwen and John Breen’s splendid volume, A Social History of the Ise Shrines: Divine Capital. Drawing on the authors’ rich academic experience — Teeuwen is a professor at the University of Oslo and Breen at the International Research Center for Japanese Studies (Nichibunken) — the book is a treasure for anyone who wants to know how this sacred space is part of the Japanese cultural and historical pageant.

The authors did not write the book’s 10 chapters together. Rather, Teeuwen wrote one through six, and Breen seven through 10. This is fitting, because Ise turns out to be not just the Shintō shrine, the Jingu as it is often known, but also very much a Buddhist site too. Two authors, two creeds, but just as the two halves of this book flow largely seamlessly into one another, so too did the so-called Shintō and Buddhism for much of Ise’s long history.

Violence is how Ise got its start. In Chapter One, Teeuwen reminds us that the “Jinshin coup of 672, in which Emperor Tenmu (formerly Prince Ōama) took the throne by defeating his nephew, represents a watershed in Ise’s early history” (p. 10). After the death of Emperor Tenji at the end of 671, rival claimants to the throne warred, with Ōama eventually succeeding. Partly on the strength of his open devotion to the sun deity Amaterasu Ōmikami, he declared himself tennō, “heavenly sovereign,” and his realm Nihon, “Origin of the Sun” (p. 11).

Emperor Tenmu ordered the composition of a history of his and his throne’s lineage — the Kojiki (712) — weaving the human and divine past into the basis for his and his descendants’ rule (p. 11). Later emperors built on the centrality of Amaterasu and other kami, or gods, to the Japanese state.

But, as Teeuwen asks, why was Ise chosen as the place where Amaterasu was to be propitiated? The answer may surprise us moderns. Most likely, Teeuwen argues, it was precisely because Ise, which was out of the way in the eighth century, too, was ideal because the gods, including Amaterasu, were considered too dangerous to keep close to the center of political power. (p. 25).

Power and the Gods

Given Buddhism’s strong connection to the kami, it may be surprising to learn that it came to play a big role at Ise. Although the presence of Buddhist priests at the shrines was resisted at first, with anti-Buddhism codified in 804 in the Protocols of the Imperial Great Shrine and the Toyuke Shrine (31 ff.), by the time of the chaos surrounding the breakdown of the Heian-kyō-centered political system, Buddhist priests were joining in the rituals performed at Ise.

Ironically, it was in this medieval, highly Buddhist-inflected period of Ise’s social history — when Japan was seen as a cosmic Buddhist mandala stretching out from Ise across Japan, “the original land of Mahāvairocana” — that Ise as a site of Shinto was first articulated.

Watarai Ieyuki, a member of the Ise priesthood who had visited Emperor Go-Daigo in Kyoto in 1321, wrote a treatise containing a chapter on what Ieyuki called “Shinto.” Even then, “Ieyuki did not conceive of Shinto as an alternative to Buddhism,” Teeuwen writes, “but rather as the inner essence of Mahāvairocana’s wisdom and compassion” (p. 97).

It was only later, after Ashikaga Takauji had betrayed Go-Daigo and set up a new bakufu, that Go-Daigo loyalists began to reimagine Ise as a site of eternal imperial power. Ise was the repository of the sacred mirror installed there by Amaterasu herself, it was argued. Therefore, deposed sovereign Go-Daigo’s possession of this treasure (along with the sacred sword held at Atsuta Shrine in neighboring Owari) legitimated his position (pp. 103-104).

Ironically, it may have been this focus on Ise as the homeland for a lost cause that prompted the military overlords to borrow some of Ise’s aura for themselves. In 1393, shogun Ashikaga Yoshimitsu began a yearly pilgrimage to Ise, accompanied by a lavish retinue of “thousands of retainers and staff” (p. 106). Teeuwen speculates that Yoshimitsu may have done this to “appropriate[e] imperial prerogatives,” perhaps even in preparation for “start[ing] a new imperial dynasty” of his own (p. 106).

The area around the shrines, namely the neighboring towns of Uji and Yamada, developed in concert with the pilgrimages, and eventually a thriving market and trade in priestly services grew up at the once faraway site.

However, civil war changed everything. With the warring states period came a breakdown in Ise’s sources of income. And when strongmen began to assert control of the realm again, Ise found itself captive to a new kind of political arrangement in which “naked military might,” such as that of the great warlord Oda Nobunaga, “undermined the charisma of priests and their claims of other-worldly powers” (p. 123). Shrewdly, Nobunaga, and Toyotomi Hideyoshi who came after him, co-opted Ise as a place of prayer for themselves and their causes alone.

Hideyoshi, for example, “looked to Ise primarily for two practical purposes: prayers for victory in his many battles and prayers for his mother’s health” (p. 125). Hideyoshi provided the Ise priests with an enormous donation — 10,000 koku of rice — when their prayers proved effective (p. 125). Ise was now a place where the shoguns, and not the imperial household, were brought under the protection of the gods.

In turn, Ise managed to keep itself under the protection of the political powers that be (p. 129). So far did this way of thinking progress that, after the shogun Tokugawa Ieyasu, who had himself apotheosized as Gongen-sama and enshrined in the Tōshōgū in Nikko, ritual experts associated Amaterasu not with the emperor, but with the shogun (p. 132).

This new political arrangement led to a rethinking of Ise, the cult of Amaterasu, and of other kami. As Japan began to acquire what we might today call national consciousness, with “Japan” comprising a polity that was clearly distinct from neighboring East Asian states, a similarly distinct religion was pulled from the tangle of Ise history: Shinto.

“The 1660s were a turning point in the Shintoization of the Ise Shrines,” Teeuwen writes. “Before this decade, Shinto had been an abstract concept…. In the 1670s, however, Buddhist actors were marginalized or even removed from the scene. They were now treated as the representatives of a ‘teaching’ that was alien to the shrines” (p. 138).

As Japan gained a new political profile, so too did the Japanese people gain visibility in the historical record, and in the daily workings of places once off-limits to all but the political and religious elite. Ise became a site of mass pilgrimage, with pilgrims taking part in both the purifying power of the shrines and the fleshly temptations on full offer at brothels, teahouses, inns, and other establishments which were thrown up to attract the pilgrims’ custom (140 ff.). Some eschewed the religious trappings altogether, lamented Meiji period Ise priest Matsuki Tokihiko: “Vast sums of money were squandered [in Ise] by tens of thousands of pilgrims; almost all of it was poured into [the pleasure quarters of] Furuichi” (p. 141).

With the restoration of imperial rule under the Meiji Emperor, Ise took on a new, and yet ancient, significance as the site where the imperial ancestor, Amaterasu, was venerated. The Meiji Emperor himself visited Ise in 1869, where he took part in elaborate rituals propitiating the Sun Goddess (164 ff.). This grand period of imperial restoration lasted less than three generations — the Meiji Emperor’s grandson, the Shōwa Emperor, navigated his lineage and his country through the greatest challenge Ise had ever faced: the American Occupation.

Ostensibly to bring religious freedom (although recent works by scholars such as Jolyon Baraka Thomas handily dismantle the myth of religious unfreedom in prewar Japan), the conquering Americans razed the articles on religion in the Meiji Constitution and set up an entirely new arrangement, in which the militant secularism of the occupation rulers cut off Amaterasu from the imperial household under the new paradigm of separation of church and state.

It is to Ise’s credit that it found a way to thrive even under this new American orthodoxy of the secular cult. Buoyed by donations and amulet purchases by millions of ordinary Japanese citizens, Ise has been able to rebrand as a place of harmony with the natural environment. “In 1993,” Breen writes, “some 5.5 million Japanese visited Ise; this was a new record” (p. 229). Drawn in part by the shikinen sengū ritual, according to which the major buildings of the shrine are rebuilt (ideally) once every 20 years, pilgrims discovered a new, old Ise (p. 241).

A Social History of the Ise Shrines is the best book I have yet read on Ise. The authors make full use of the extensive literature available in Japanese to weave a compelling narrative of Ise as a place of ongoing spiritual discovery and reinvention. Although Teeuwen and Breen agree with scholar Fabio Rambelli in characterizing Ise as a “floating signifier,” arguing that various historical actors have all approached ― and redefined ― Ise in their own way, it could just as easily be argued that “Ise’s remarkable appeal” goes beyond mere neutrality of expression (pp. 7-8).

That there have been many agents working on the meaning of Ise does not preclude Ise’s having a meaning all its own. Indeed, I would like to have seen more of how the introduction of Christian teachings in the 16th century might, like Buddhism, have contributed to the refinement of how Ise is situated within always-changing Japan.

But these suggestions should circle back to this wonderful new volume. A Social History of the Ise Shrines should be at the top of the list for anyone looking forward to his or her next visit to the soul of Japan.

Title: A Social History of the Ise Shrines: Divine Capital

Purchase the Book: From the publisher’s website here, or from Amazon here.